As mountain running with poles becomes more and more popular, I figured it was about time I found out why.

A week running up and down Munros in the Scottish Highlands should let me know if they’re for me and prove a good test for these particular ones.

What the Manufacturers Say

Helinox specialise in lightweight outdoor equipment, producing a range of items that use their aluminium poles to make camp chairs, stretchers, tables and walking poles. They sell their poles as being “super light and ultra-compact”. Their Passport series offers Helinox’s lightest range of walking poles, with the TL120’s I had on test coming in at 180 grams per pole. These fold into three segments and also have an adjustable top section which can be set from 109cm to 120cm folding away to 35cm. If you want to go lighter and are happy to lose the adjustment, you can get the fixed size ones which come in at between 152 grams (for the 105cm pole) and 164 grams (for the 125cm pole). 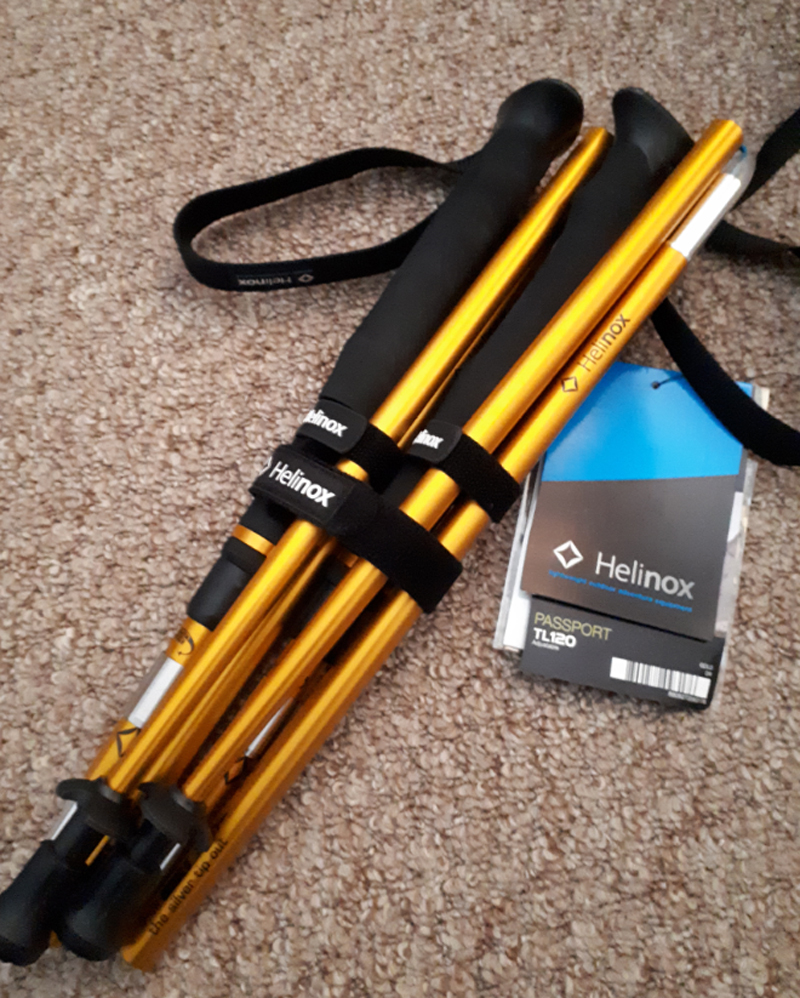 Out of the box, my first impression was regarding how light they were. I haven’t previously used poles when walking and mountain running, as carrying extra weight for what seemed like a bit of a luxury went against my desire to always travel as light and fast as possible. After handling these, and feeling how light and compact they were, I was more than happy to throw them in my bag for the next trip to Snowdonia.

I had a long mountain run planned for Saturday and some scrambling for Sunday. I didn’t take them on the run but had them in my walking sack for the day after and with tired legs on the walk out, I finally remembered I had them in my bag and used them properly for the first time. 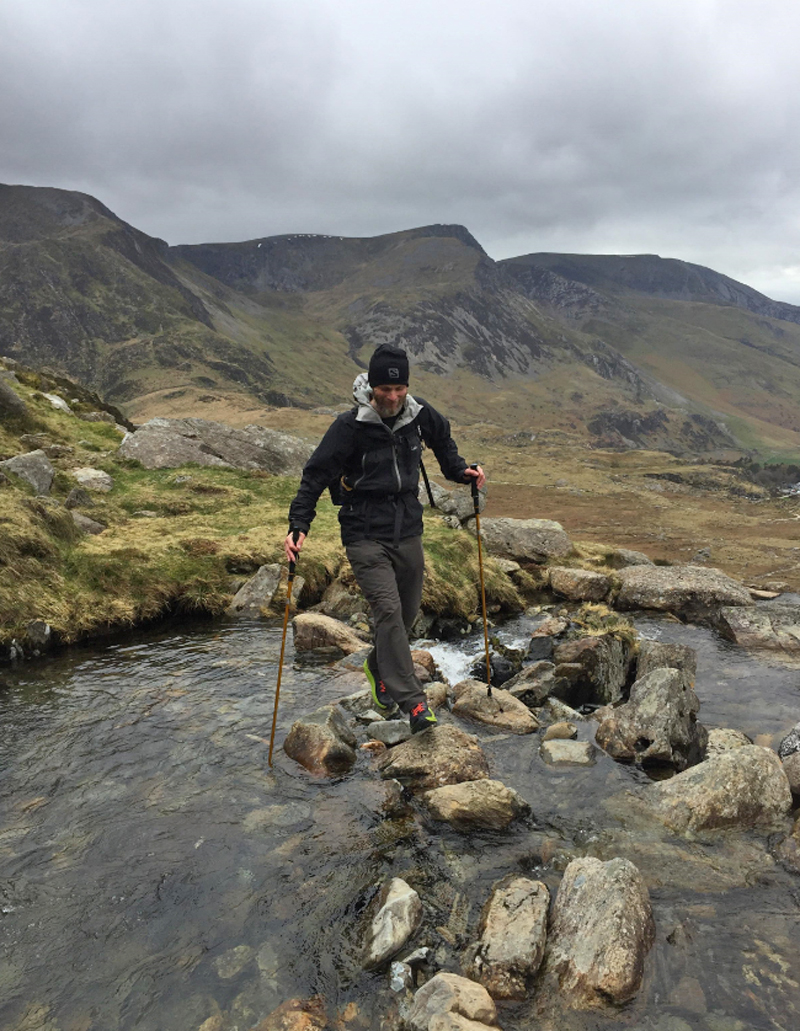 I’ve been known to fall into streams so having them on hand for stream/river crossings seemed like a real positive, but it wasn’t until I used them a few weeks later in the Scottish Highlands that I really got to grips with them.

I had a week’s leave to take and with a big race coming up, what better way to spend it than touring the Highlands, running up and down mountains as I went. I planned to bag as many Munros as I could, doing a mixture of running and walking, so the trip proved to be a great test for the poles and I took them with me up every mountain. 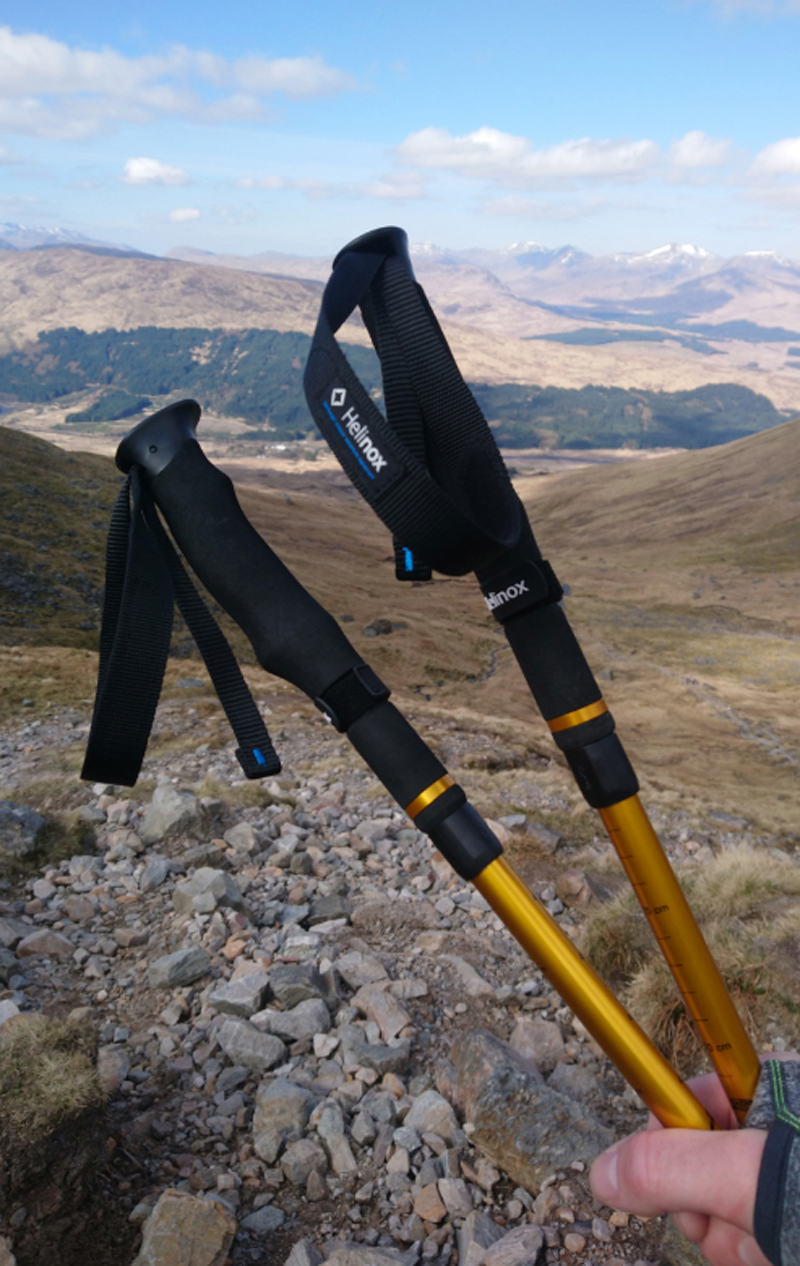 The first time using them on a long climb was a relatively short day climbing Beinn Dorain and Beinn an Dothaidh from Bridge of Orchy and it was a real revelation. The ability to use both my arms and my legs to motor up the hillside meant I was moving faster and putting a lot less strain through my knees. I liked the feel of it straight away and was an instant convert.

The descents were less successful, with me struggling to work out exactly how to use them best. I tried them for a while but soon, after nearly falling over them a couple of times, resorted to just holding the pair of them in one hand and running down normally.

They passed the first day test with flying colours, but a couple of things were still left to prove. The wrist straps are very thin and narrow compared to many other poles and there is not a lot of cushioning in them, so I wondered if this would cause any discomfort over a longer day. There was also the question of whether the lightweight nature of them had an adverse impact on how robust they were. With 7 more mountain days ahead, I’d be sure to find out.

The start of day two saw the poles in action right from the start as the first climb of the day was a steep unrelenting pull from sea level in Glen Etive, to the 1078m summit of Ben Starav. I had every intention to take it easy and reserve my energy for the rest of the day, but was enjoying putting my whole body into the climb and got a bit carried away. I thought to myself “it’s no biggie” … “I’m only doing three hills today”. This was a mistake!

After spending many weekends training in Snowdonia I had forgotten that the Scots put bigger gaps between their mountains than the Welsh. Much bigger! With my legs already wobbly by the time I got to the bealach between my 2nd and 3rd Munros of the day the climb was going to be tough, but it was made a lot easier by the poles. Not only do they allow me to use my arms to help propel myself forward, they seem to force me into a good position that helps with breathing and posture. Placing them in good spots also gives me something to concentrate on other than the fact my legs and lungs are hurting.

As each day went on through the trip I became more and more attached to the poles. I started looking forward to the climbs where I could use them and enjoying the fact I had fresher legs for the descents. A gloriously long and tough route taking in all of the Buachaille Munros and tops on a day that exceeded the weather forecast was followed by a traverse of the Sisters of Kintail in strong wind, rain, hail, snow and complete clag, having what can only really be described as type 2 fun and pushing the limit of what’s safe and comfortable to do with ‘fast and light’ kit.

After a more restful day walking up Ben Wyvis with my friends, I was ready for what turned out to be the highlight of the trip, a circuit of the four Munros of the Beinn Dearg group from Loch Broom near Ullapool.

The day started with a 3-mile jog along a forest track with poles in hand but folded away. Then the gradient increased and I assembled the poles, wasting no time thanks to how easy they are to unfold, I was on the single-track stalkers path that lead into the wilderness and the heart of these remote, rugged mountains. 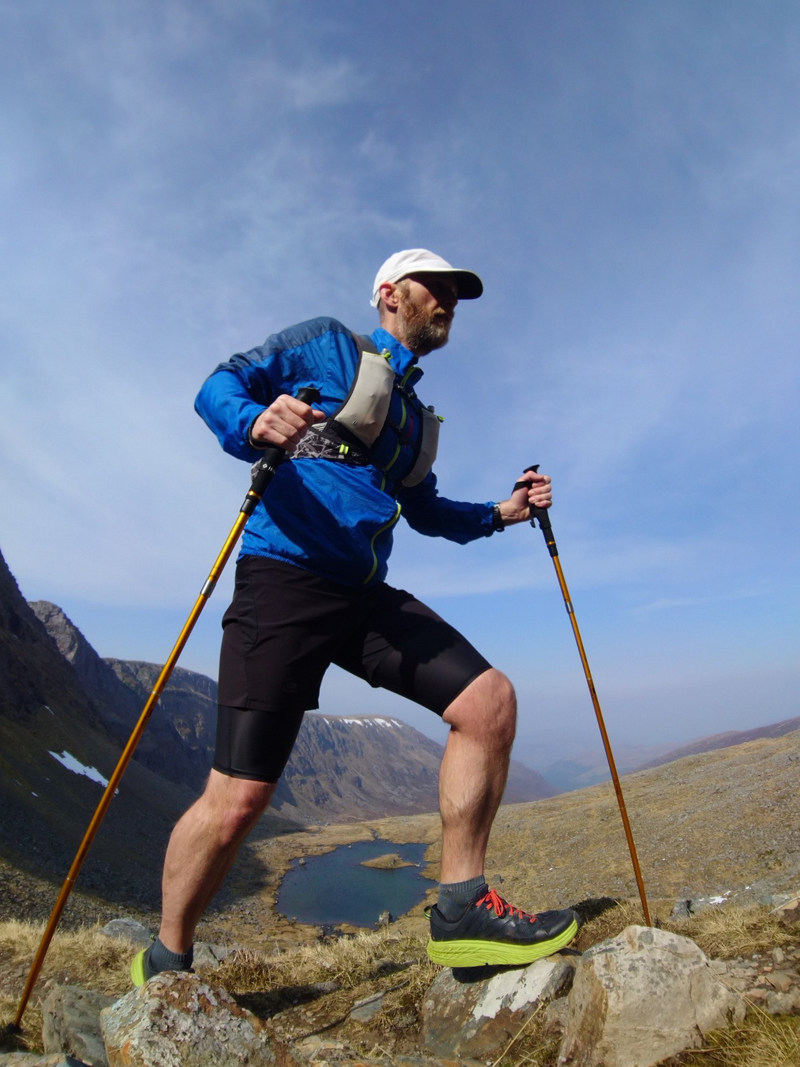 Climbing up out of Gleann na Sguaib

Once at the Bealach the stalkers path petered out and the bouldery terrain began. This is where the poles became less useful, as there were sections of the trail where it was beneficial to use hands on rock for balance. Without the ability to stow them away for short sections, I kept them in hand and used my thumb and forefingers for the rock and used my two smaller fingers to hold the poles out of the way. A technique that worked fine for scrambling over boulders and up short rock bands. For the down climbing however, it would have been handy to have them stowed away.

Once back on more runnable terrain I finally found the courage to try using them properly on the next descent. As I was moving relatively slowly over technical terrain and I was less worried about hurting myself with me being near the end of my trip, I was happy jumping from rock to rock using the poles to help me balance and propel me over boggy ground. Running from the Summit of Beinn Dearg to Cona’ Mheall took me round the head of Ciore Ghranda. Bounding along a technical trail, traveling fast and light in the wilds of the highlands, with this stunning sight below me, made me grin from ear to ear and was the epitome of what mountain running is to me. 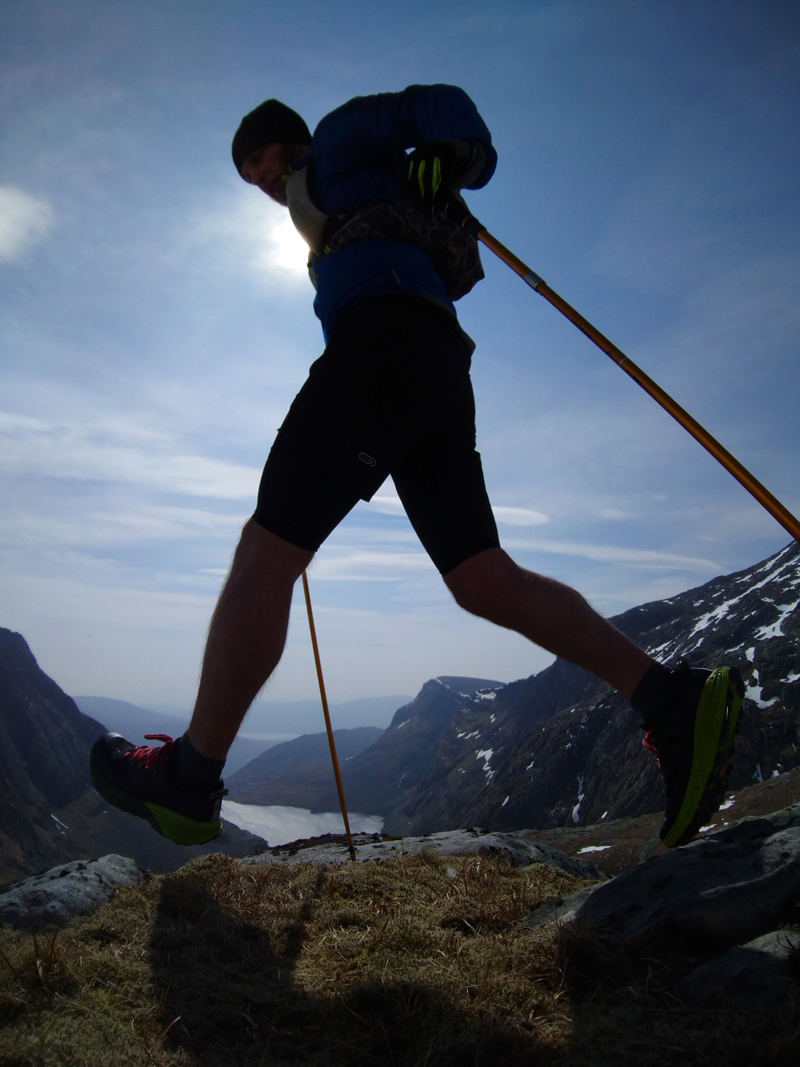 The descent from Beinn Dearg with Coire Ghranda in the background

Once the four Munros were bagged, I was back on the stalkers path that retuned me to Loch Broom and as the trail became more suitable for faster running the poles became less useful. Rather than stopping to try and stow them away, I just held both in my left hand and gleefully bolted down the valley. My running vest/bag doesn’t have any means of attaching poles to the outside which would have been useful here, but I really didn’t find carrying them in one hand a bother.  I was well aware that the fact my legs still felt fresh enough to enjoy the final descent of a long day, was partly down to the me having used the poles on the climbs. It also meant they were quickly on hand for any cheeky little climbs on the way back. 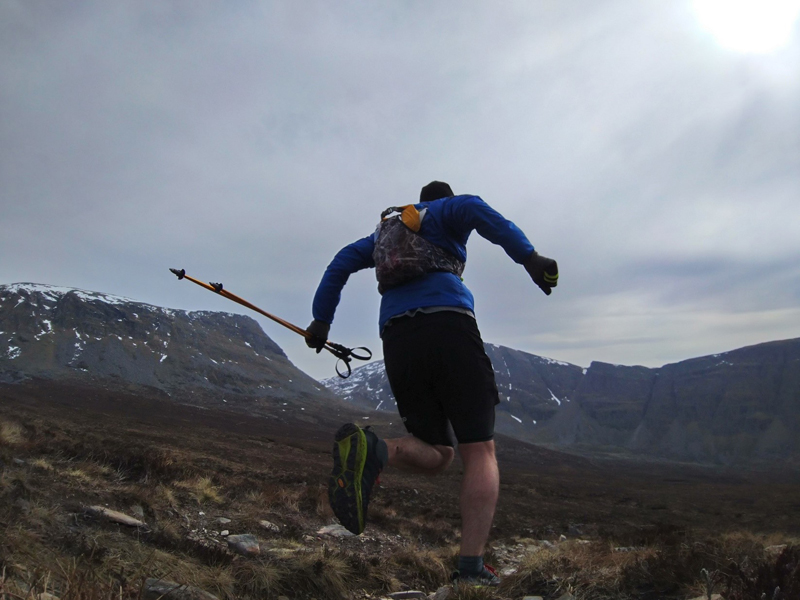 During the 8 days I spent in the highlands, I climbed 23 Munros, ran/walked 100 miles and climbed 38,000 feet, taking the Passport TL 120s with me every step of the way. As you can probably tell, I am a convert to using poles when out running in the mountains. My reluctance regarding them being an unnecessary weight was misplaced considering the super light nature of this particular model.

Regarding these specific poles, there’s no denying that their key selling point is well placed. They are light. The strap is very simple and has minimal padding. I did use these on big days out, for hours at a time without discomfort though, so what padding there is did its job nicely. Assembling and collapsing them is quick and simple and can easily be done on the move. The only difficulty I had was in adjusting the height using the twist lock while I was wearing my gloves.

Despite their weight they still feel more than sturdy enough to do the job and I was confident putting my weight through them when powering up the climbs.

Running off into the Fannichs. (photo credit Michaela Penny)

I went into my trip to the Highlands with a niggle in my right knee, having these on hand meant I could take a little of the pressure off my legs. It felt like it made all the difference and allowed me to spend day after day completing big mountain routes in comfort. The fact that they can do that for me makes them a must have item on my kit list whenever I’m disappearing into the mountains.

MyOutdoors @MyOutdoors
RT @BMC_Walk: It's just a year until @BorisJohnson is expected to lead global climate commitments at @COP26 Yet a year-long promise to ban…

MyOutdoors @MyOutdoors
RT @peakdistrict: ✅ We are extending the bike hire season right through the Autumn-Winter at #Ashbourne and #Derwent https://t.co/4LNXZCrT…