Coming Soon!
We're hard at work on bringing you the best Adventure Guides and look forward to sharing more with you soon.
Subscribe to this RSS feed

I don't know why everybody moans about the weather on Ben Nevis. Every time I've been up the behemoth the sun has been shining bright in the sky. First time was a perfect winters day with crystal clear blue skies. Views far and wide over the Highlands. The most recent was a few weeks ago. A Wednesday in late August with a bit of haze. With a temperature in the mid to high 20s. By the halfway lochan or to give it's correct name, Lochan Meall an t-Suidhe, (cut and pasted) I'd gone through 2 1/2 litres of water and one of my group the same. So it was time to test the Grayl Geopress

Published in Accessories Reviews
Tagged under
Be the first to comment!
Read more...
Wednesday, 02 June 2021 12:36

More of us are embracing getting around on two wheels, with sales of bicycles up by 41% in January* but when it comes to families cycling more together, or children cycling to school we're miles behind our Dutch counterparts.
Published in UK News
Tagged under
Be the first to comment!
Read more...
Tuesday, 18 May 2021 08:15

Santini Cycling Wear, looking forward to the renewed partnership with the UCI for the next four years, chooses to produce the UCI World Champion Jersey using Polartec 100% recycled fabric.

For SS21, Bern have revamped two of their core styles. The helmets will be available in the UK at the end of the month and will both be available with improved safety technology and new colourways. Catering for the whole family, Bern is launching the Bern Watts 2.0 for adults and the Bern Nino 2.0 for kids.

The festival's youth ambassador award, established in 2015, celebrates adventurous young people, the landscapes they choose to explore and the outdoor pursuits in which they excel.  The young winner needs to have shown resilience and determination to succeed within their chosen area of expertise, shown results through their own efforts and ideas, given back to their community, whilst being thought of as an example of excellence by others.

Mikayla Parton epitomises these winning principles perfectly. Her meteoric rise to the top of the international downhill mountain bike race scene, from riding her first trail bike in 2015 to placing fifth at the UCI Mountain Bike World Championships 2020, in just five years can be attributed to an obvious raw talent, constant hard work, dedicated training, motivation, focus and a dogged determination for success.

Mikayla Parton said: "I am pretty shocked and very grateful to receive this fantastic award.  It's pretty cool to have my name alongside the likes of Shauna Coxsey [2018].  It was very unexpected and still is!  Thank you so much to the Mountain Festival." 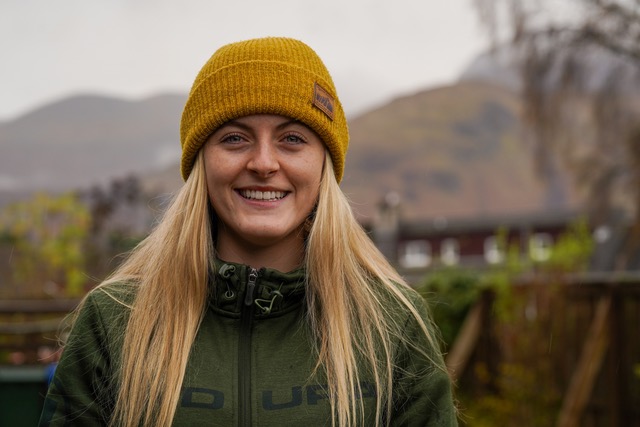 Lydia Rohmer, Principal and Chief Executive, West Highland College UHI, said: "West Highland College UHI continue to be privileged to sponsor The Scottish Youth Award for Excellence in Mountain Culture. We are delighted that this year's recipient is not only an Alumni from our School of Adventure Studies, but that Mikayla remains committed to her sport and her own development; it's what this award is all about. The qualities of resilience and determination are what we endeavour to instil in all our students. We wish to send our congratulations to Mikayla and wish her every success in her future career."

Mikayla was late to the sport of mountain bike racing.  She got her first downhill bike, aged about 17, competing in her first race at Innerleithen in the Scottish Borders just a week later.  From that moment on she was addicted - the adrenaline, the tracks, the people, the noticeable progression.

Her first downhill race win came at Nevis Range in May 2017.  After multiple wins over the next year and a half in the Senior Women's category she made the giant leap to the Elite racing circuit. In 2019 Mikayla was not only crowned Scottish Downhill Champion, she also grabbed her first Elite podium finish, 2nd place, in the final round of the UK National Downhill Series.  She competed in her first race overseas and in her first UCI Mountain Bike World Cup races.

Despite the pandemic in 2020 Mikayla had a fantastic race season. She was Great Britain's highest placed Women's Elite finisher at her first UCI Mountain Bike World Championships, at Leogang, Austria, in an impressive fifth place, with two top ten results on the World Cup circuit.

Chris O'Brien, CEO of Nevis Range, said: "We are delighted to see Mikayla Parton being honoured with such a fantastic award.  Having achieved so much at the highest level of Downhill Mountain Biking in such a short period of time, it is thoroughly deserved.

"With such hard work and determination, we are excited to see Mikayla progress even further in the next few years. We are very proud to have her as part of the Nevis Range family, a true inspiration to the Mountain Biking Community of Fort William!"

Mikayla Parton is an extremely talented professional downhill racer, known on the international racing circuit as a 'Privateer'.  She doesn't have the backing and benefits of a factory racing team, rather she has the support of a few loyal sponsors including Greenpower, Nevis Range, Trek Bikes, and Endura.   She foots the bills for her pro-racing career herself, making her own travel plans and logistics arrangements and keeping her own bike race-ready, whilst calling in favours wherever she can.

In order to make ends meet she is a soap scientist, handmaking soap and skincare products for The Highland Soap Company.  She has also been part of the Nevis Range Ski School team for many years, working as an instructor in the winter months.

It's a strange old time for cycling. Worldwide events mean every thing is pretty much based from the front door, but you know what? You can find some adventure from your front door if you try and even though the Zoa Insulated Jacket from Albion Cycling is probably designed for something a little more wild we still managed to put it through it's paces in the post  industrial landscape of South Wales.

Published in Clothing Reviews
Tagged under
Be the first to comment!
Read more...
Friday, 29 January 2021 11:07

RideLondon Festival of Cycling Cancelled for May 2021

Recent data showed promising growth for several bike categories, with e-bikes being the highest with 31% year-on-year growth. Although a lot of this growth came as a result of the pandemic, hopes are high that lifestyle changes ushered in by the pandemic could become permanent, with many people choosing to continue commuting by bike. Not only is this great for getting more exercise in, it’s also great for the environment – win win. The electric bikes battery and motor provide assistance when pedalling, so you don’t need to put as much effort in as you cycle – making getting from A to B a lot easier and in turn making life easier.

The Cycle Show, the UK's biggest and longest-running bicycle exhibition, and the inaugural London eBike Festival in partnership with Shimano Steps have launched tickets for the 2021 shows. The event, the UK's biggest cycling and triathlon exhibition, is set to take place at one of London's most iconic venues, Alexandra Palace, over the weekend 25th-27th June 2021.

TriBourne Multisport Events, organisers of the award-winning Eastbourne Triathlon, have announced the addition of a relay format to the inaugural 255 Triathlon this August, the brand-new ultra-distance triathlon which launched last month.