Best of both worlds - the plug and play outdoor package holiday

The idea of a package holiday doesn't sit well when you love the detail of planning the perfect escape, but as they say, "don't judge a book by it's cover" and in this case we mean the Travel Agent's brochure cover. 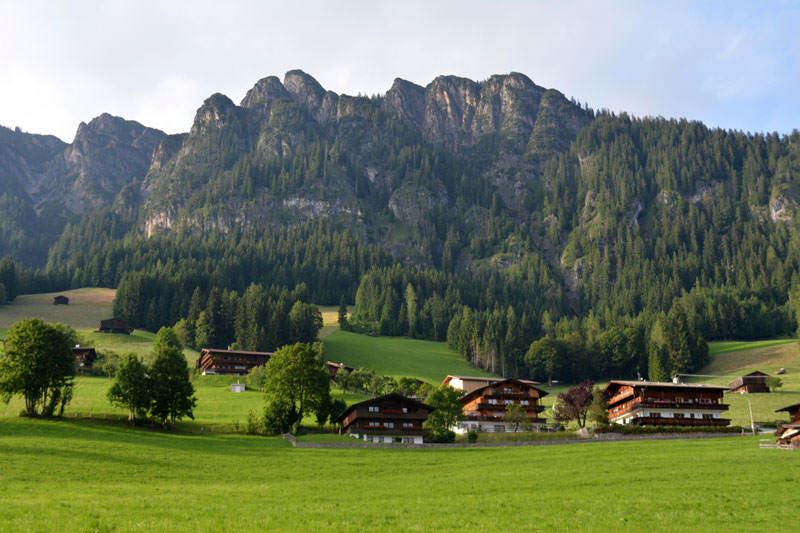 The truth is when you sit down and do the maths the "package holiday" may not be the tightly scheduled, over-chaperoned, individuality destroyer the adverts may portray. When you sit down and do the maths of flights and transfers, with even a budget hotel on a B&B basis, the buying power of the travel companies means you'll be hard pushed to match the price. Of course if you want something a bit more luxurious you've probably already worked out you don't have to emerge from a sleeping bag each morning to have adventure and over the last few years the holiday companies have noticed.

Think of the Alps and you'll probably think of snow but across the region there's a big push to increase the numbers of summer visitors and in July we bit the bullet and signed up for a trip to the Austrian Tirol with Thomson Lakes and Mountains. Fitting the contents of a week into three and a half days it was a whirlwind tour of Alpbachtal Seeland, the Tirol's Lake District, but it was a real eye opener. With the services of a holiday company opportunities were presented to you rather than having to look from them. If there's a local free travel card for tourists you'll get one, if there's free guided walks or bike rides by the tourist agency they'll take the hassle out of getting you there and if all you want is a comfortable bed and the freedom to do the bike rides and walks at your own time - well you'll get the information to help but then be left to your own devices. Many of the activities in the Thomson Lakes and Mountains packages took advantage of a free program of events that's available to any tourist, you just pick the ones that suit your own schedule. 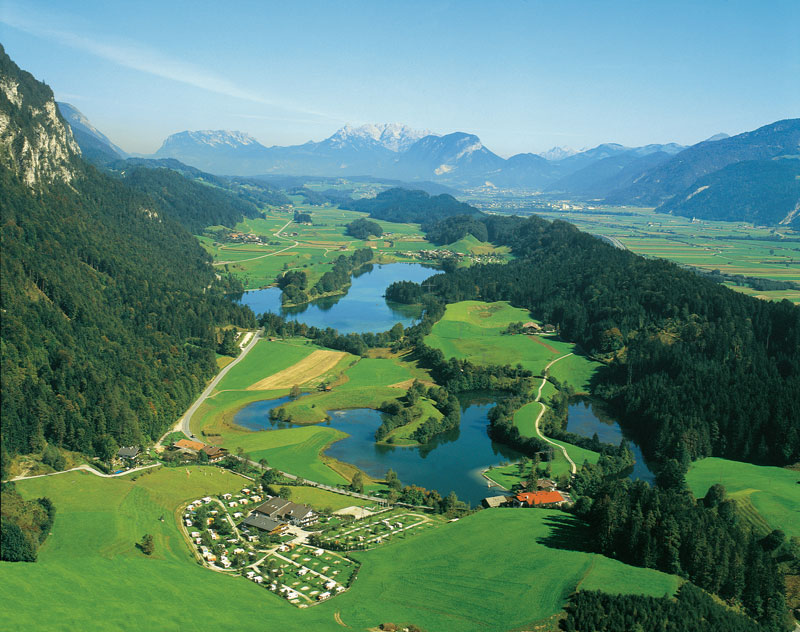 Based in the 4 star Alphof Hotel in Alpbach it was a 45 minute drive from the delightful Innsbruck Airport, and as a package tour there's no worrying or extra expense over transfers - it's part of "the package" and it's waiting for you. In winter you can expect the airport to be packed with skiers and boarders but in July the plane came to a stop close enough to the, almost deserted, terminal building to make having to board a bus a pointless exercise with the bus wheels doing barely ten revolutions before arriving at their destination. The absence of large numbers of people at the airport was a scenario to be repeated throughout the trip.

With a lot to pack in the first full day started early - 4am early! For two months of the year the gondola from Alpbach to the top station of the nearby Wiedersbergerhorn starts up early on pre-set days, setting off in the pre-dawn with time to reach the summit in time for sunrise. A well defined path up the ridge leads to a double summit giving 360 degree views with views all the way to the Glacial Tuxertal and Karwendl mountains. As a wakeup it's impressive and while you may have followed the largest crowd you'll see all week to the summit there's no compunction to retrace your steps with a network of well signposted walking routes surrounding Alpbach. The restaurant just below the top gondola station, however, may have a strong pull. Opening its doors at 7am returning sunrise hunters can breakfast on classic Austrian food and good coffee while the sun climbs high enough for warmth to bathe the slopes. Once up it stayed up too, with temperatures consistently hovering in the high 20's and touching 30 occasionally. 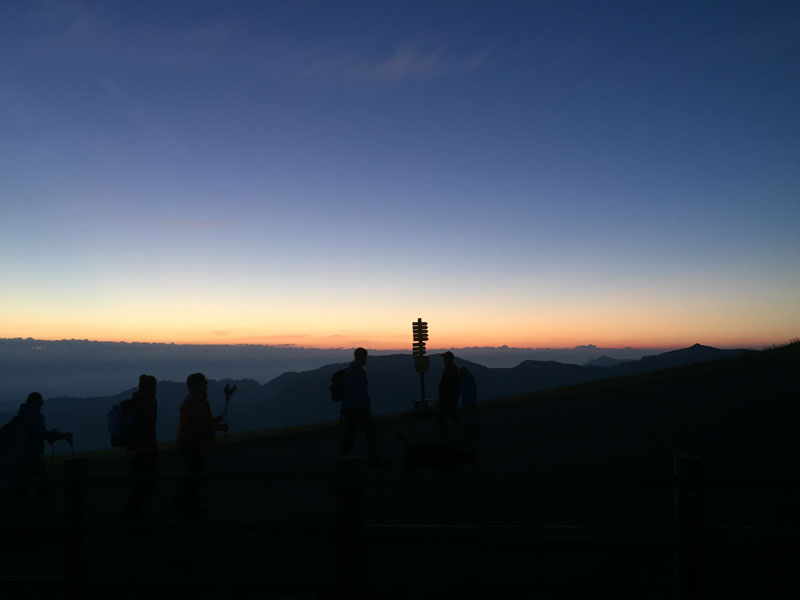 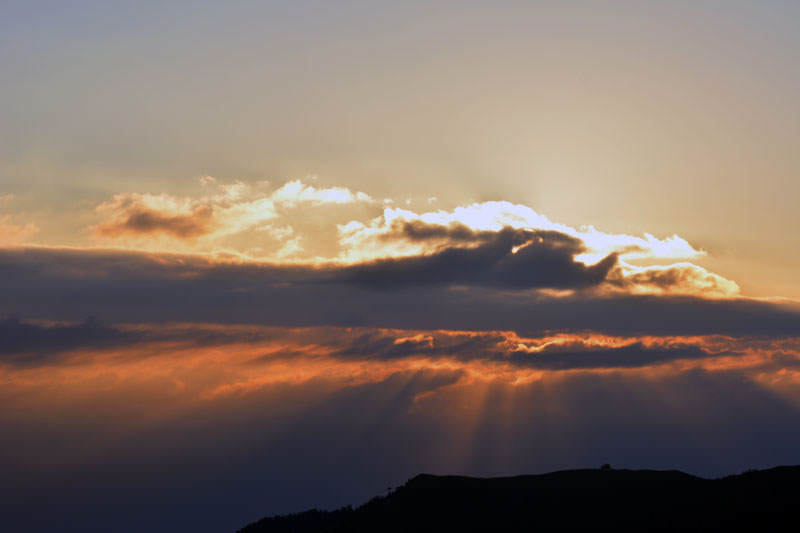 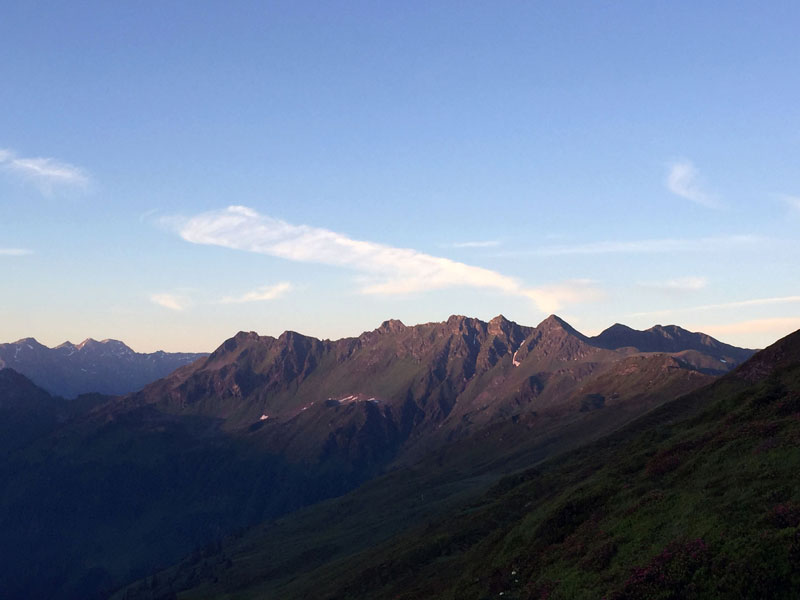 If you stop overnight in Alpbachtal Seenland you'll get a tourist card on check in and it's the key to getting the most out of your trip. The card opens up the higher mountains with two gondolas running throughout the summer including the new line to the adjacent Wildschonau from where you can access Auffach and Niederau. The card also gives you free travel on the bus service connecting the villages in the valley and from there to the wider railway network. In addition to the free features the tourist card also gives a range of discounts at local shops, including mountain bikes and ebikes.

While the higher summits of the French and Swiss Alps may attract the mountaineers the Austrian Tirol is summer mountain biking heaven. The gentler profiles are more reminiscent of the English Lake District and the extensive network of routes has something for every level of rider. Over recent years the ebike has become increasingly popular in Europe and with day rental from around 35 Euros you can see why. With the extra power of a 1000W battery you can go further, longer, and up steeper hills. Everything in the Tirol starts by going uphill and if you're not a hardened cyclist a motor can totally reset what's within your reach. From the villages the routes climb the valley sides, linking valleys with long steady climbs followed by spectacular descents - we were hitting speeds of over 65kmph on the downhill into Inneralpach.

While the region isn't a secret amongst mountain bikers it's anything but overcrowded. Mountain hut restaurants stay open through the summer and taking a mountain bike up in the gondola costs only a couple of Euros, and the reward is stunning ridge routes and spectacular descents whether battery assisted or not. 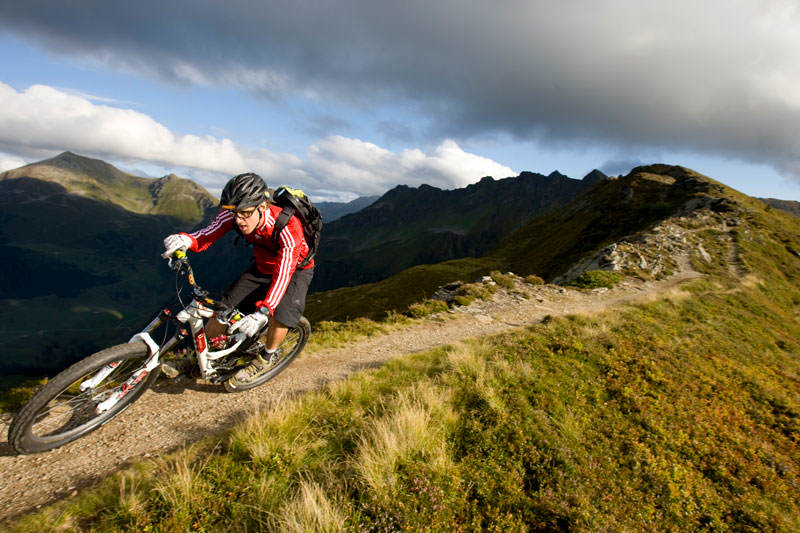 Away from even the cycle paths we spent the second morning bases around the neighbouring village of Niederau, where with the traditional uphill start we climbed steadily through alpine meadows and forest to the high moors. Another of the free guided walks provided by the toursist office took us to Stockeben through the fragrant pine forests full of bilberries and wild strawberries. After about an hour and a half you reach the moor at 1000 m altitude. Dramatically different from the better known alpine meadows the The Filzmoos Moor sits in almost total silence and with stories of people disappearing when straying from the path the plateau took on a Dartmoor like quality. Small patches of standing water could be up to 6 metres deep while even the trees grew laterally rather than vertically. Only the occassional call of a single ChiffChaff broke the silence and the modern world of hotels and cable cars seemed a world away. Though walking barefoot through the sponge like moss water is at a premium on this walk and with summer temperatures hitting the 30s it's worth carrying at least a litre; with the sun beating down and shade almost non existant until you regain the forest for the descent suncream, hat and water are very much essentials. 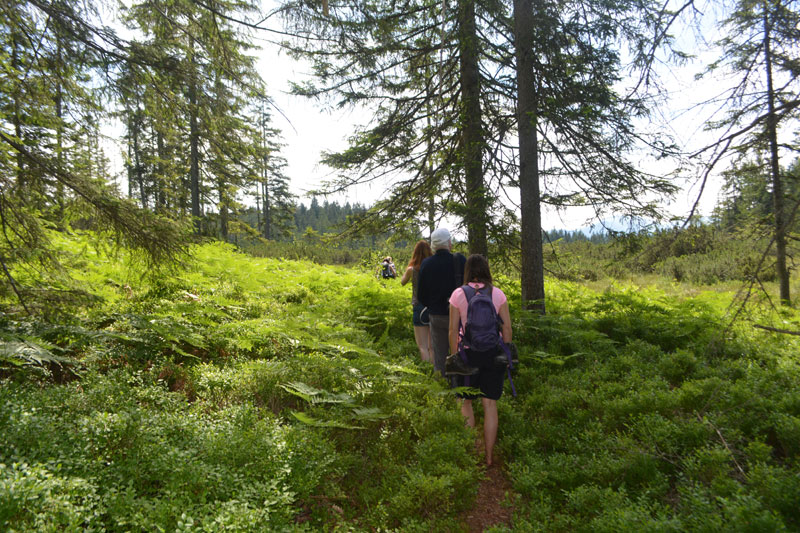 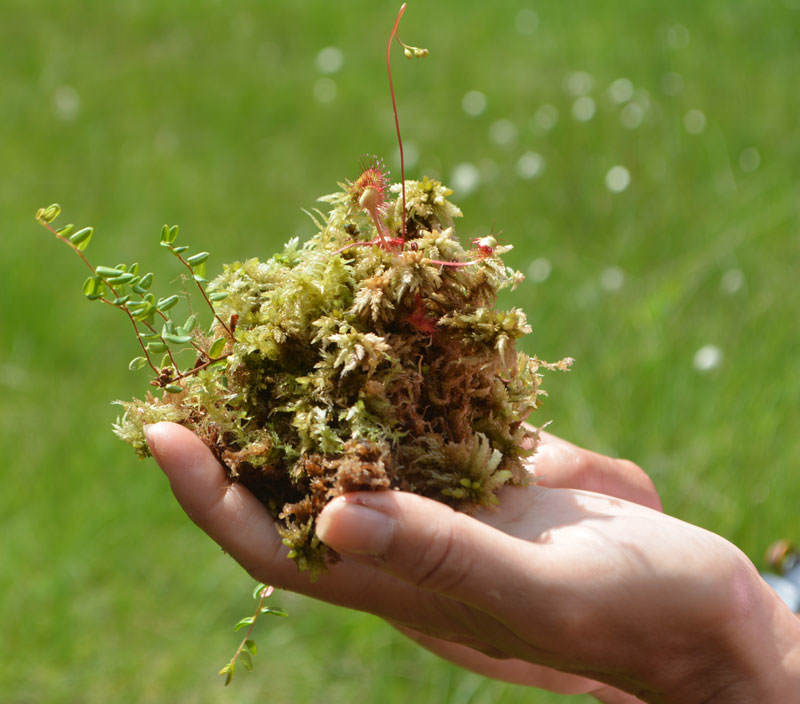 Back in the valley the gondola whisked us up to the top of the Markbachjoch for lunch. For those looking for something beyond the walking and biking this is the home of the Wildschönau Flight School, where you can paraglide tandem or learn to take control yourself with a full course. While Wildschönau and the Markbacjoch may not have the spectacular pinnacles of a Chamonix or Dolomites for the paraglider the views above reach down the length of the Inn Valley and west to Kitzbuhl. 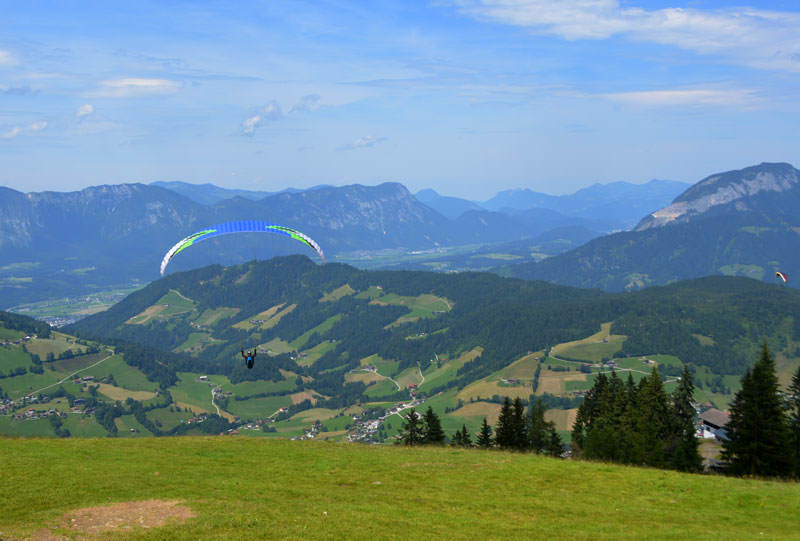 That the Tirol proved to be so beautiful in summer came as no surprise. That Alpbachtal Seeland was so lightly populated with tourists in July was surpsing, and probably short lived as the region's focussing on boosting summer numbers. After a lifetime of tent-based budget trips, however, the real revaltion was the package holiday. In booking a package you make a compromise, exchanging a small amount of freedom in changing location at will in return for the comfort of a bed, secure storage, and a wet-weather escape if the need arises but adventure doesn't have to mean "roughing it"! The dawn summit walk, the ebike tour and the high moors are accessible with or without a package deal but with the Thomson's package you don't have to lose the freedom to come and go as you please, mixing and matching according to your mood or the weather. You can do everything you could do from a tent - but you can return to a comfortable bed each evening, have breakfast in the morning and fill your days to the max letting someone else worry about logistics and washing up. 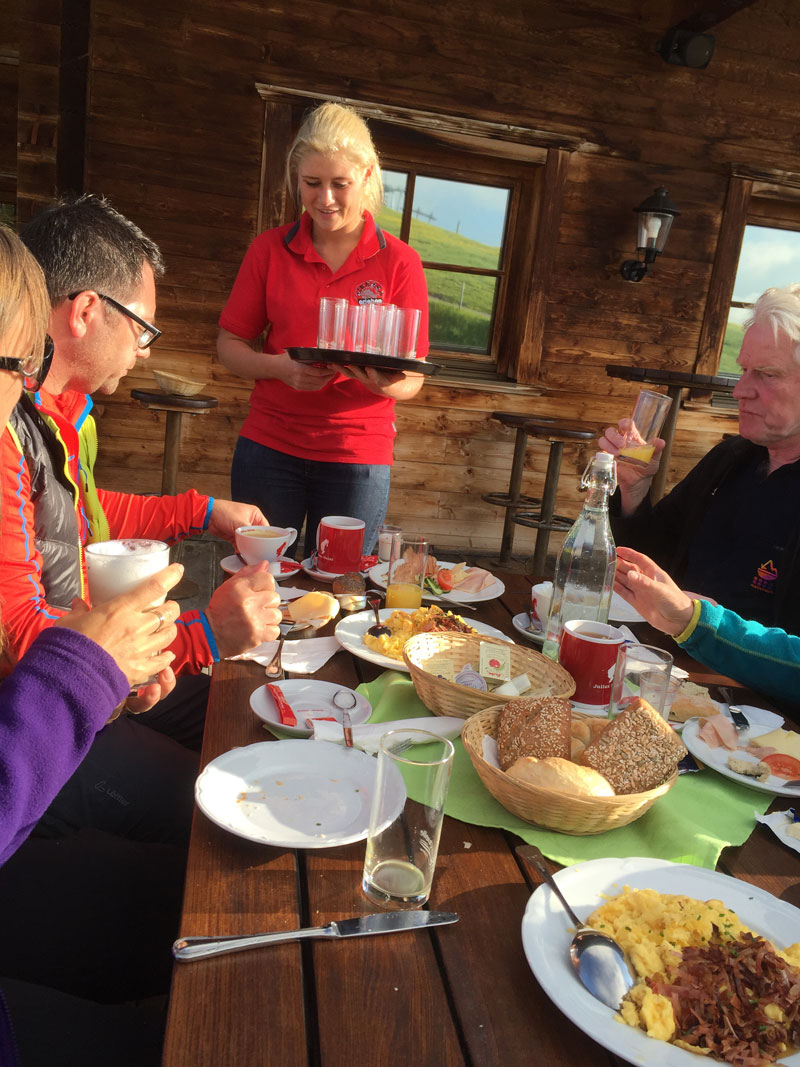 Looking at prices a package based in Alpach with Thomsons Lakes and Travels for a signle person (usually a more expensive option) in July starts at around £330. By the time you've priced up flights (from the more expensive Manchester in this case), transfers and breakfasts you're not going to be far from price equality with camping but with less baggage to haul around, days freed up to fill with adventure rather than planning, and a comfortable bed each night.  The pakage holiday of the 21st century is far from its 1970's and 80's incarnation, offering individuality rather than conformity and recognising the increasingly active many of us prefer our annual escape to be. It really has been a revalation.

More in this category: « A Winter Week in the Alps Find the time, one day time will find you »
back to top