“If there is an area particularly characterised by male dominance it’s Alpinism. Glorifying courage, strength and endurance it embodies the exact opposite of what 19-century women were expected to be…”

I’m reading the panels accompanying the displays at Zermatt’s Alpine museum, which is currently holding a special exhibition to rewrite women back into the Swiss alpine town’s history. One exhibit is a typical example of this: a heroic-looking Edward Whymper, the first person to summit the Matterhorn in 1865. Blink and you may miss the fact that 4 of his party were killed during the descent. ( if you didn’t know this already). 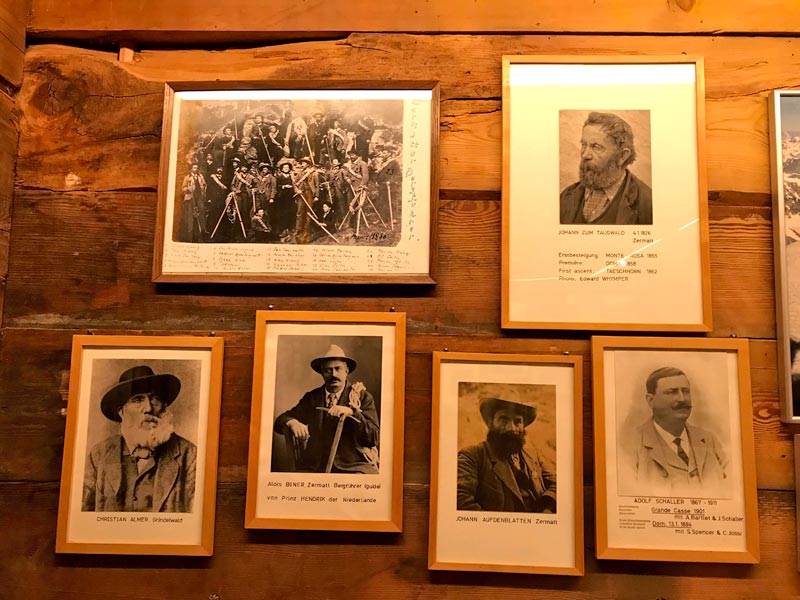 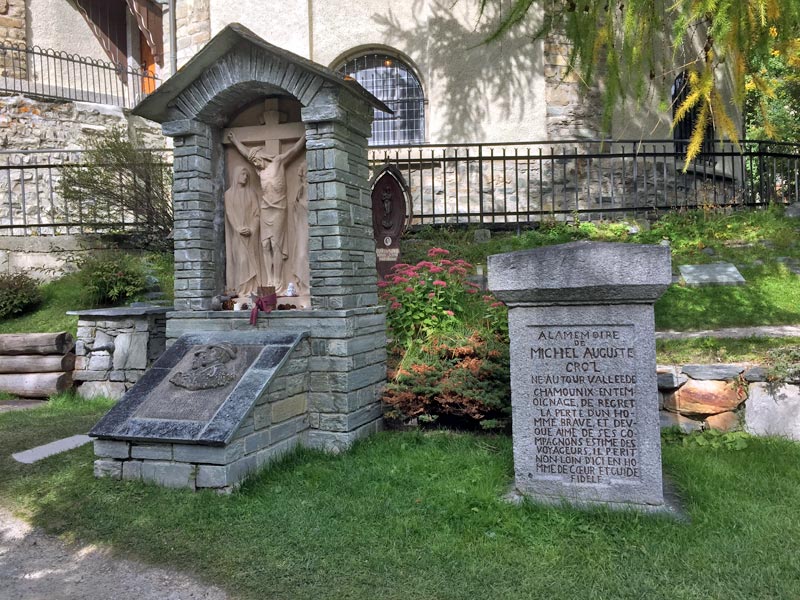 Meanwhile, Zermatt is also part of a drive to boost women’s participation in Alpinism, which 150 years since the first female ascent of the Matterhorn by Brit, Lucy Walker, is still a vastly male-dominated sport. Walker became an inspiration for many female mountaineers around the world, yet, 150 years later, there still remains a gap between the genders taking part in alpinism.

And this is why I am here. I’ve joined a team of women who are here to climb their first 4000-meter peak. Most have never participated in alpinism before but there is something about the mountains that has been calling them. Our goal is the 4164-meter Breithorn, the Matterhorn’s snowy neighbour. Considered one of the Alps’ easiest 4000-meter peaks, it’s a great introduction to the sport.

(Disclaimer, this is not my first 4000-meter peak, and I am very enthusiastic about climbing and mountaineering, but it’s been a while since I’ve alpine climbed anything -- as like everyone else here -- life gets in the way, and I am very keen to refresh skills and ask questions about the challenges women face when taking part in alpinism.)

The climb is part of a wider challenge, the 100% Women Peak Challenge, launched on International Women’s Day earlier this year, where all-female teams are being called on to climb Switzerland’s highest peaks by September 8th. The challenge was put together by Switzerland Tourism, the Swiss Alpine Club (SAC), Swiss Mountain Guide Association (SBV), and Mammut. 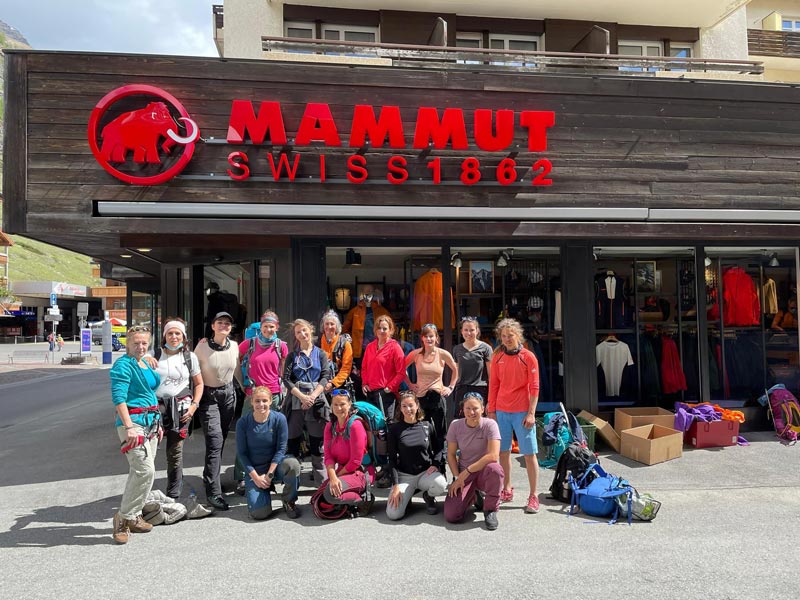 We are joined by professional mountaineer Caro North, who is an ambassador for the Swiss outdoor brand Mammut, and Swiss mountain guide, Caroline George, who will introduce participants to the basics of mountaineering.

“Some people perceive this platform as being sexist,” says George, but it’s not the intention to exclude men … but to bring the balance back to the centre because right now it's so off-kilter. The intention is just to provide more opportunity for women in a male-dominated world at the moment.”

The training begins by splitting into two teams and climbing a 500 meter via ferrata in Andermatt, essential for learning how to move together, as we are all roped up to the guide. It’s then onto Zermatt, where, rather than taking a direct ascent to the Breithorn from the top of the Klein Matterhorn at 3833 meters, we spend the night at the nearby Rifugio Guide del Cervino for the ‘alpine start’ experience. This gives Caro, Caroline, and third guide, Ramona, the opportunity to teach crampon and ice axe techniques. 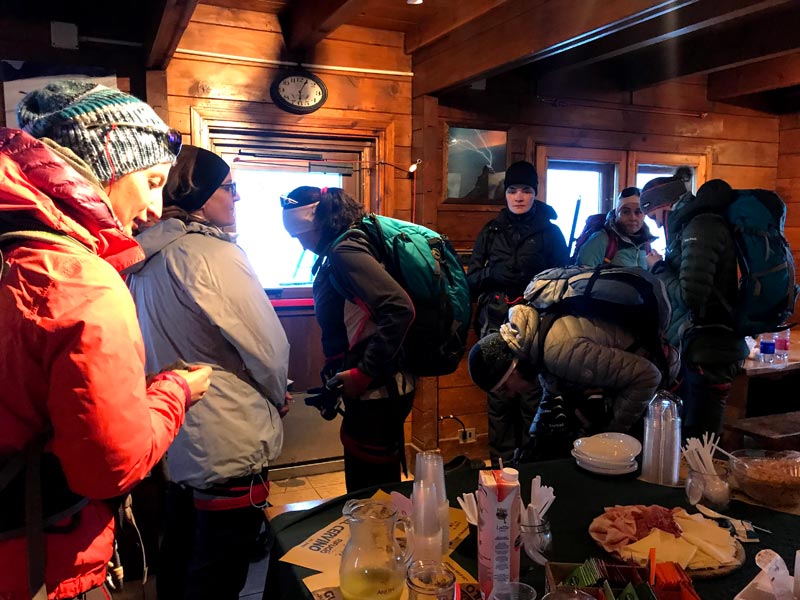 At the rifugio, before dinner, we discuss the concept:

“Why do women need a challenge like this?” I ask:

“And there’s a different dynamic than in a mixed group. Women have more the courage to do something, to make the first step. They're less afraid and they can cross the barrier to just do it.”

George reaffirms this adding: “With the 100% Peak Challenge a space has been created for women to go to the mountain.:

“For example, the Swiss Alpine Club was male-only until 1980 when women were accepted. But there’s a very big difference between this and actively being invited to go into the mountains,” she explains.

“You have an open door, but it's hard to cross the door to go into the room, especially when before that you were actively rejected. If you don't make a movement to include women, it's really hard for them to make a step and take their place.”

“Over the past four years, there's been a movement within Switzerland to try to get more women into the mountains. The SAC's Swiss Expedition Team was mixed and there were only a few women. To attract more to their ranks they created a women-only team.”

“I was one of their first members, and Caro and Ramona were in it too, it was special!".

“Then by seeing so many women into the mountain, it has a snowball effect because women think, well, she can do it. I can do it, too.”

But there is still a long way to go to shift the balance. There are currently just 42 women guides in Switzerland: “That’s two per cent and that is the norm. And in some countries, it's one per cent.”

But for George, “you choose to become a mountain guide because you cannot imagine doing anything else.”

“For me, it was a dream for a long time,” says North, “when I was young and going to high school. It's just my big passion and I'd really like to share my passion. So, that's how I got there.” 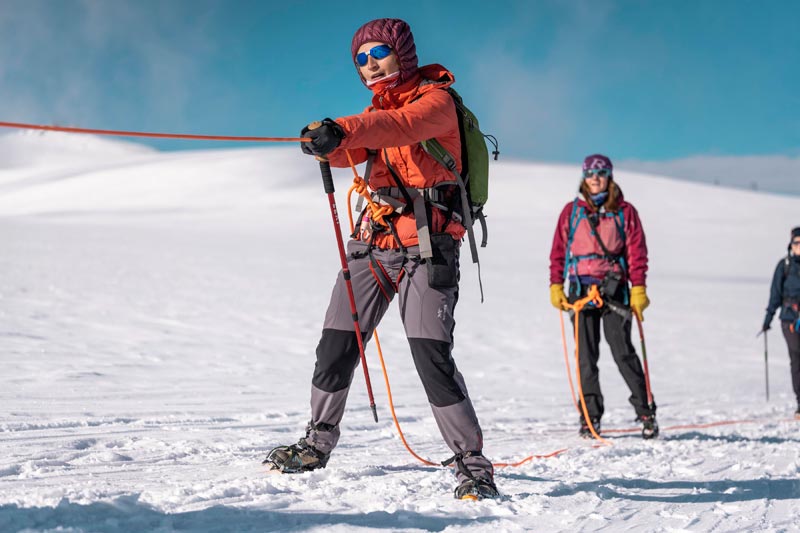 So how did they brave the challenge and become guides? Did they have to fight prejudices?

The 29-year-old says she has never climbed the Matterhorn. George has done so 6 times and says “it’s just a really bad atmosphere. We feel very exposed, you know, like the deer in the headlights. If you're a woman on the Matterhorn, all the guys are looking at everything you do.”

“And that’s the motivation behind this,” she adds, “to not feel like the deer in the headlights when we go out or to not be asked the question:  ‘where is your guide’ when you see an all-female team.

“People take it for granted that the man leads.  That mindset takes time to change and the numbers speak for themselves that nothing has really changed. It's a slow process.” says George.

“I personally like to climb stuff with men and with women equally. But for sure if you do it with women, you just rely on each other a lot more,” adds North. 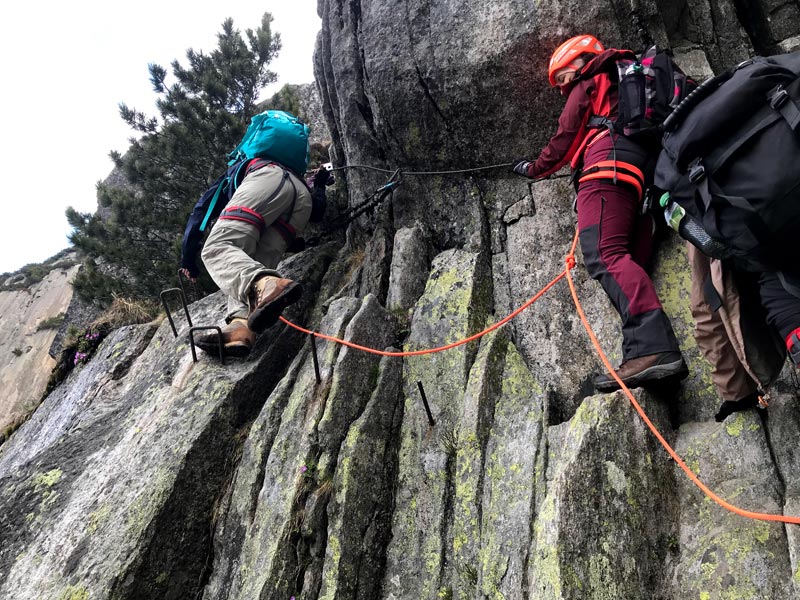 “Men just have this space in our society that they're the leaders in the mountains. And so psychologically, it feels like when you're on a climb, you always have a crutch that if you can't do it, they’ll probably be able to, even if they're not capable. When you're with women, you definitely feel more self-reliant. And I think that changes the dynamic a lot more,” says George.

North agrees; “most of the time, when you see a man and the woman together in the mountains, the man is in front.  but this is a big, big prejudice. I think it's not the case that always the women always climbs the easier part.

“I remember my first north faces. I only climbed them with women because I didn't want people to say afterwards, oh the men did the harder pitches.”

“And I think this is something that has to change in our society. Why is it, if we see a mixed team, he has to be the stronger one? He’s not necessarily the stronger one. Sometimes you just share leads.”

“And I think it's also kind of a shame if a woman always has to prove that she's actually stronger, why just accept they’re both strong and they both do their thing.”

But George warns that “in our lifetime, we will not see change, so long as this percentage have that change of like two per cent, people will always take that for granted.”

Asked if they feel less ambition in the mountains with women, the response is absolute: “No, The other way around. If you're a woman group, the motivation is always super high” exclaims North.

“Let's not portray women as being like angels, women can be really catty. And jealous of each other. And it can be terrible between women, too, for sure.”

“But I think when you have a good female partnership, it's simply the best… It's like anything, you choose the people you hang out with.”

With many theories in the business world about mixed groups being more successful, do they see this as the future for alpinism?

“I would say that in the future it will be so. I think, like in any field, you need the yin and the yang. But up until now, the guiding profession has really put forth values that are male-only,” says George. “ The guy isn’t thirsty, is never cold, never, hungry, never scared, never needs sleep.”

The next morning we rise at 5 am, ready for around 600m of ascent, the hardest part being the climb back up the piste we descended as its icy and steep.

We rope up to cross the glacier and ascend the Breithorn’s crest, where we enter some thick cloud. 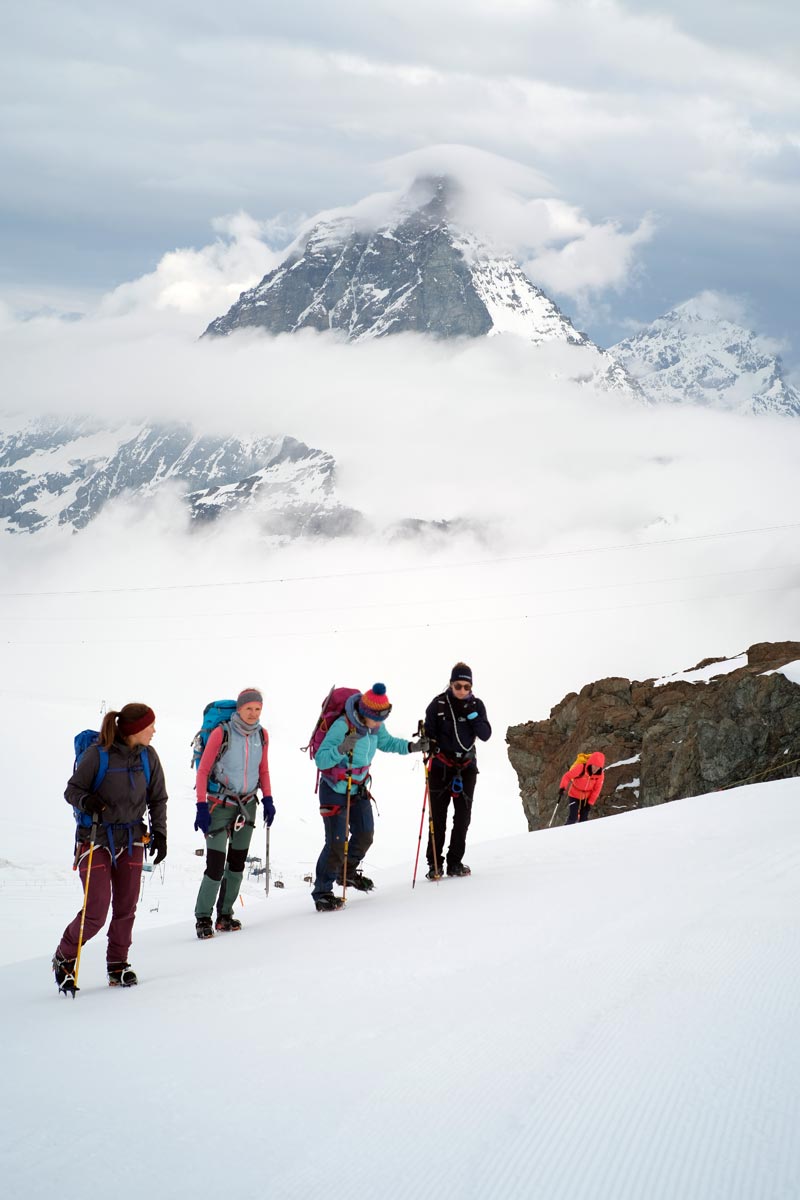 I spot some ski tourers below us, maybe on a different route, and we are soon overtaken by two lycra-clad girls in trainers and super light crampons going for a speed ascent.

Four hours after leaving the rifugio we reach the summit, where the cloud briefly disperses, allowing the iconic Matterhorn to come into view. The cheers and selfie-taking commence, a female-only summit has been achieved and everyone made it. 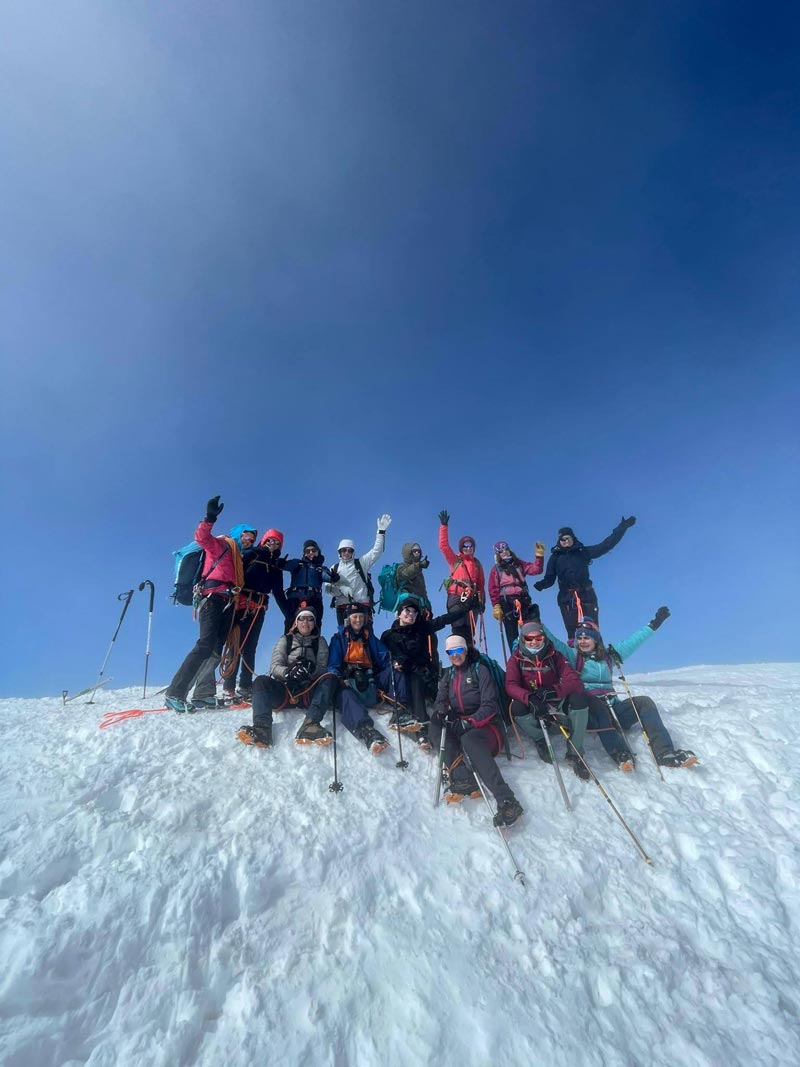 For those who have never reached 4000 meters before it’s a special moment. Some weren’t sure they’d make it, others, not sure what to expect. The views are stunning. That’s something one will never get bored of and what draws us back into the mountains time and time again, be that via a simple hike, a ski tour or an epic rock climb. 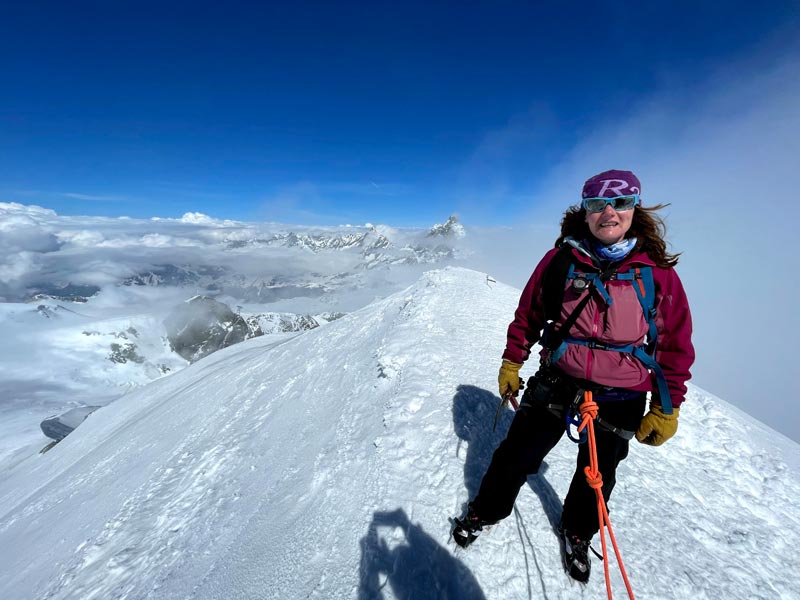 Once calm has been restored, we head back to the Klein Matterhorn, where someone asks the question about it just being ‘’The Breithorn,”

“Well, I would say every experience in life is one step after the other,” says George, “ And you have to have building blocks so you can experience without having fear.:

“But I think it's really important to not burn bridges. Life is all about having experiences that define your future.”

“Maybe you don't like it or maybe you do and then you want to do more.”

“But you started somewhere.” 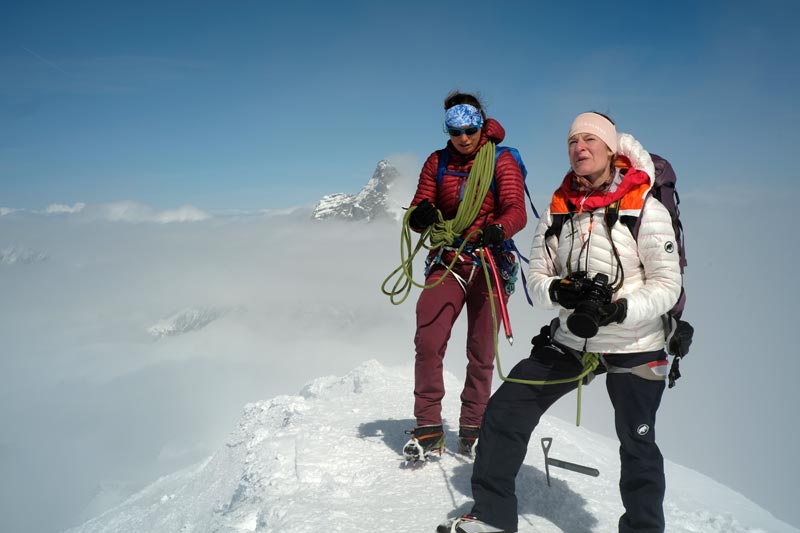 “People will criticise and judge or laugh out of their own fear or because it makes them uncomfortable. And it is a way to control others by belittling them. But have they even climbed the Briethorn? Do they know anything about it? You don't know. And so their opinion belongs to them.”

I wonder if those were the thoughts of Lucy Walker, 150 years ago as she broke conventions for 19th-century women by achieving 28 successful attempts on peaks over 4,000m and the first female ascent for 16 summits, including the Eiger.