Cycling helmets have certainly moved on from when I was tearing up the streets on my Raleigh Burner or 10 speed Falcon Rapier. Back then skid lids looked like leather sausages held together by a piece of string masquerading as chin strap. Sartorial elegance, they were not and I don't even remember that many pros wearing them. Hinault looked cool in his aviators, badger thatch luxurious on his Breton Noggin and Fignon with his metal geek glasses and blonde flowing pony tail was as elegant as you'd ever see. Even my fellow ADHDer Greg Lemond with his just got out of a bed in a wind tunnel in a fun fair do looked better than leather sausage heads. In the last couple of decades modern technology has changed this. Helmets have become nice looking, light, aero, and comfortable. No whatever your reason for not wearing one, looking stupid isn't a factor. Today helmets can be purchased at as little as £10. The Smith Trace however is way more at £200. Is this justified? I tested it to find out.

First of all an important point. Any Helmet sold must have passed European Standards, if your reading this in the future then hopefully this is still the same if not hopefully a Terminator has travelled back in time. So all are safe. The safest helmet for a person to wear is the one that fits no matter the price. However of course safety levels can increase with spend. Lighter construction means more vents, reducing heat build up and possibly avoiding a crash in the first place. The same can be said for better cage, straps, pads etc which reduce distraction and lets all say it together "THE MARK OF GOOD KIT IS YOU FORGET YOU'RE WEARING IT" oh didn't that feel good. Of course let us not forget that more expensive helmets tend to look better as well and yes to many people that is important however much they deny it.

Here's what Smith have to say about the Trace

The pinnacle helmet in Smith’s performance road collection is the all new Trace. The Trace features Koroyd, which fully surrounds the helmet providing exceptional protection and works with the internal air channels and open intake and exhaust ports to produce maximum ventilation. Storage and ventilation of eyewear is crucial on those long rides, the Trace’s AirEvac system relieves hot air that builds up on your eyewear to prevent fogging. Eyewear storage is made easy by channels on the side of the helmet that hold your eyewear in place for those grueling climbs. 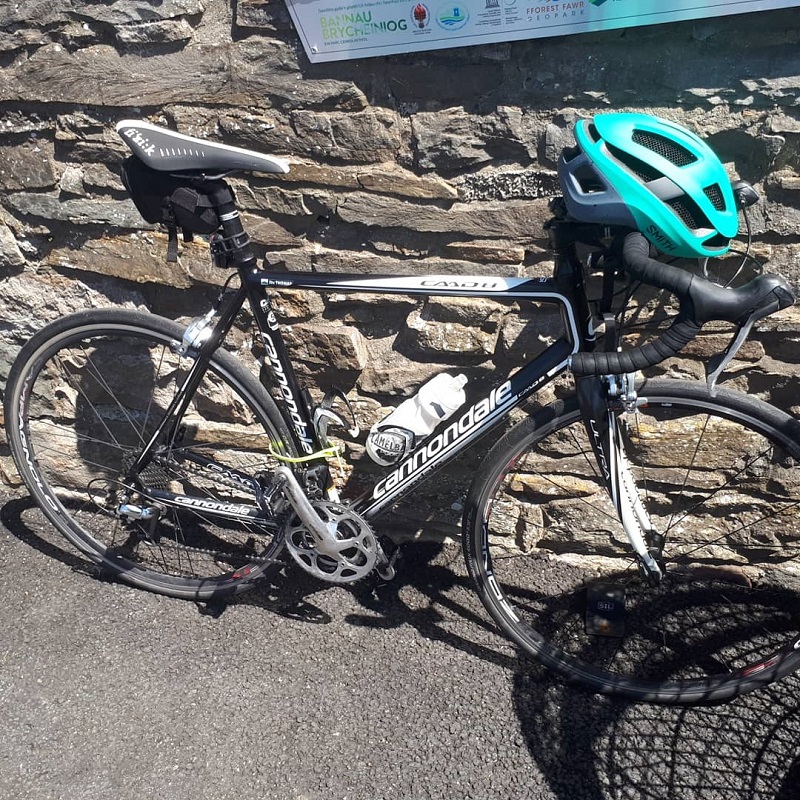 At 280g (M) the Trace is certainly lighweight but compared to the 190g of the S-Works Prevail it's a little podgy. Even the Aero Met Rivale comes in at 230g. But unless you are a skinny climber 90g really goesn't matter. Put it this way it's only a couple of biscuits. Obviously with my melon head and it's extraordinary width I opted for the largest size. It was with trepidation that I awaited the test piece to arrive. I've struggled to get well fitted helmets. Cheap isn't an option for me and I've often been disappointed in expensive models that were so so pretty as well, when I felt my skull being pinched. If a helmet doesn't fit in the shop it isn't going to fit 20 miles into a ride or half way up a big climb when your heart rate is up and your head expands. 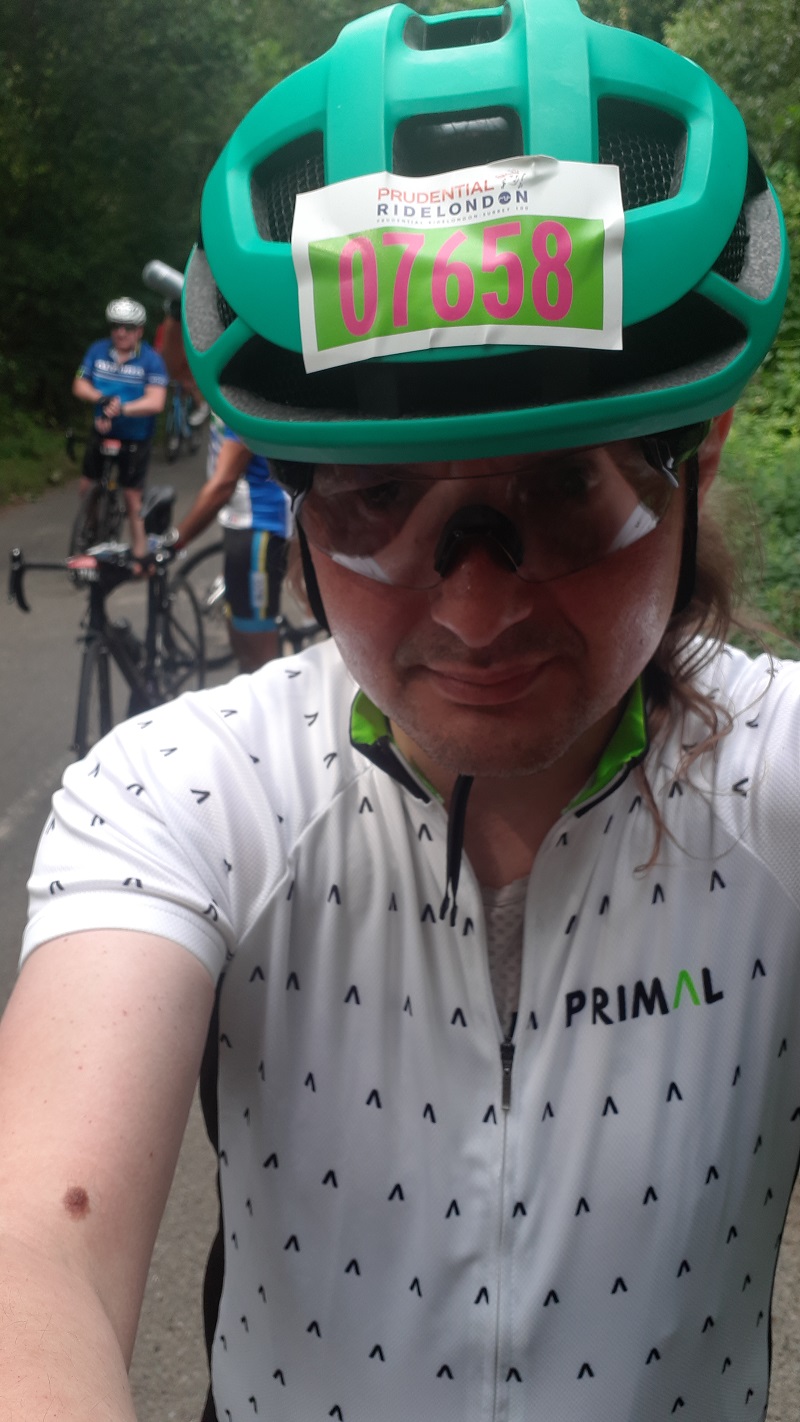 The test piece came in a rather striking Jade and Charcoal colour scheme. As you can see in the pictures it's certainly eye-catching. Maybe a good thing on the roads but I worried how it would fit into my colour scheme. But this job has forced me to open my mind to an enhanced palette in my pedalling and I was prepared to let in grow on me. Putting the lid on I initially struggled to get much adjustment out of the dial and it felt a little tight. Obviously post crash my grip is feeble but still I felt I was fighting the system. The result was that it felt a little tight. I wondered if I'd actually get to test it at all but finally I got a safe fit. There was still a noticeable presence by my ears of the Trace but it was safe and I thought lets go for a spin. After a few minutes I felt the Trace wasn't stable. Stopping and checking cage and straps, no all was secure. But still I couldn't get settled.

A confession here that might be relevant. This was my first post crash, CRPS and surgery road ride so I don't think anything could have settled me. I didn't monitor my heart rate on this ride because I knew this would be an unrepresentative measure. But that being said at this point I wasn't impressed with the Trace but I put in down to just not being my fit. the problem was I was awaiting my crash replacement so was lidless and now being active and desperate to ride I had the option of the using the Trace or my crash damaged Rivale.

I gave the Trace a second chance and did my first 30 miler of the year. This time I forgot it was there, well almost, I went to scratch an itch on my scalp and hit the mesh with my finger. Great it keeps down instances of wasp invasion but also keeps down satisfying scratch interface. The 18 vents and well designed exhaust system kept me cool the excellent pads felt fresh and wicked away perspiration and I felt comfortable. The instability I soon realised was down to the MIPS safety system.

MIPS is a brain protection system — engineered to add protection

The MIPS Brain Protection System (BPS) is found inside the helmet, generally between the comfort padding and the EPS (a high quality foam used to reduce energy).

For certain impacts, the MIPS BPS System can reduce harmful forces transmitted to the brain.

This is how MIPS works

The core of the MIPS BPS System is a low friction layer that allows the head to move 10-15 mm relative the helmet in all directions, reducing rotational motion to the brain. The MIPS BPS System makes your helmet safer and adds protection.

Now obviously they explained this better than me. In laymen's term it helps reduce impact and the effects of rotational motion. Lighter helmets also have a positive effect as motorcyclists have known for years. So yes a lighter helmet is safer. Now again I'm going to be totally honest with you here. I haven't tested any of this and I have no intention of doing so. I've had my share of crashing and however much I'd love to provide you with the full test. Tough.

But I was aware I'd only done a few shortish rides and not my usual level of hard testing so I took the Trace on the 100 mile bimble of Ride London. 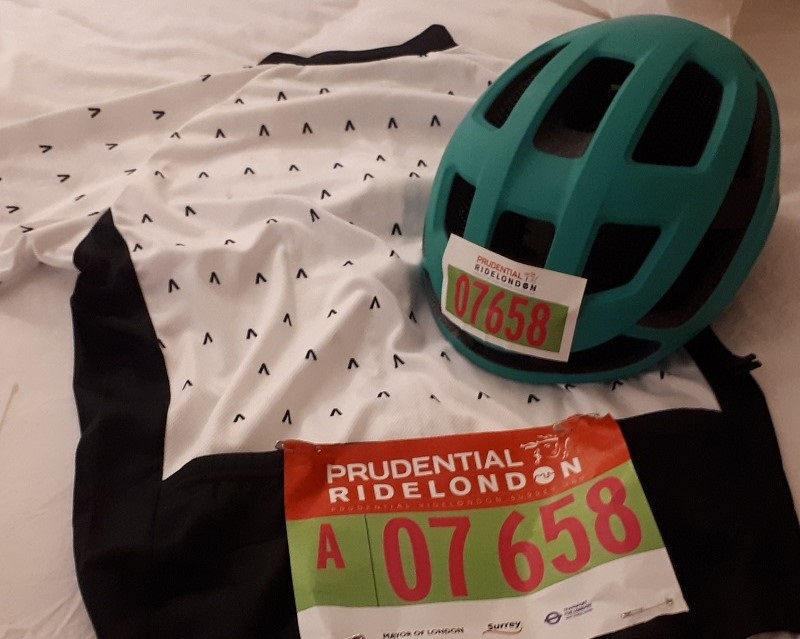 It seems the titanium plate in my wrist weighs at least 6kg and the ride was tougher this year and at times humid. I'm no where near as fit as I was and I now struggle to regulate body temperature. At times the Trace did feel hot but even on the climb of Box Hill or the push of Leith my glasses never fogged up or did I feel the need to remove the Trace. In the pictures the helmet looks very good and yes the colours have grown on me. Vey importantly I'm a lot easier to pick out in the pictures this year.

The negatives of the Trace are I'd like the adjustment to be a little easier at first, I couldn't work out the sunglasses integration system and I don't like the mesh. Apart from the adjustment issue these are trivial though.

The Trace is comfortable on long ride, visually striking, feels fresh when you put it on thanks to amazing micro bacterial pads and actually feels a little different from what everyone else is riding in. If the safety claims stack up then Smith have produced a pretty impressive helmet but the question remains is it worth £200.

Well that's a personal question. In any sportive you can see riders on 5k bikes with badly adjusted gears because they won't stretch to £30 for a basic service. Mamils wearing £250 skin suits but glasses costing £5  that would rip their face apart in a crash. If you have £200 to spend on a helmet then the Smith Trace is without doubt something you should go and try out. If you don't have that sort of cash, keep an eye out in sales and try it out. The best helmet is one that fits you and if the Smith Trace does then it's worth your consideration.

Further details on the MIPS System

and the Smith Trace

More in this category: « Smith Attack with Photochromatic Lens: Tested and Reviewed Rab Kinetic Pants tested and reviewed »
back to top

MyOutdoors @MyOutdoors
RT @MyOutdoors: .@TGOMagazine has long been the best written and most authoritative mag for UK hillwalkers and it's vital that we all suppo…