GP Batteries in this latest offering bring three headlamps each with individual features to fit various needs. Starting straight out of the box, the packaging gives it a premium look but at a low cost. At £34.99 it sits in the middle with its offering compared to other headlamps on the market. Personally, I feel £35 for a rechargeable and waterproof headlamp is a good price for both new comers or those serious about the outdoors and sports.

The PHR15 offers something unique that the other two don't and this is the recharging element. Packaged with GP's Recyko batteries which can be charged via a micro USB cable direct in to the headlamp or removed and charged in a battery charger elsewhere. You are not just limited to using the Recyko batteries as they are clearly removable. You could opt for single use batteries which may last longer but you then lose the ability to recharge the headlamp on the go. 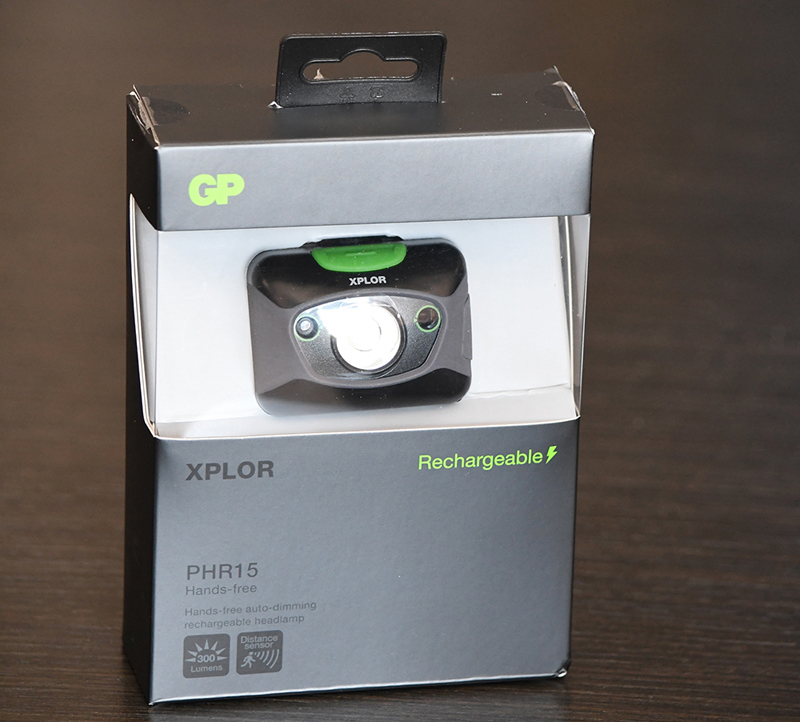 You can't charge the headlamp whilst the lamp is on and in use. When you plug the lamp in the light is cut off and the charging indicator begins on the side.
This charging indicator on the side is very helpful as it shows you when it is fully charged, when flashing it is charging and when permanently on it shows the lamp is fully charged. Helpful so you know when you are good to go again and not risk of overcharging the device either.

I found the headlamp charged very quickly and was on full power again in a few hours when plugged in to the mains or via a battery pack/solar panel it would take slightly longer but was achievable with this method. 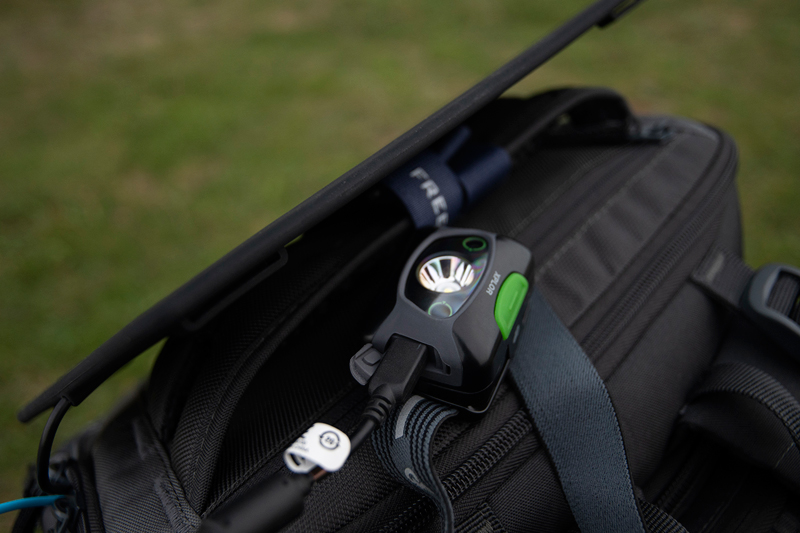 The PHR15 offers a respectable 300lm which is very bright! The full beam can reach up to 160m which was amble distance to work out where I was going on coastal paths or up a mountain path in the dark, in fact on a clear night the torch could be seen further. Especially with the SOS flashing mode which became very useful trying to find the other photographers on the side of Cribyn on the night of the Perseid Meteors. 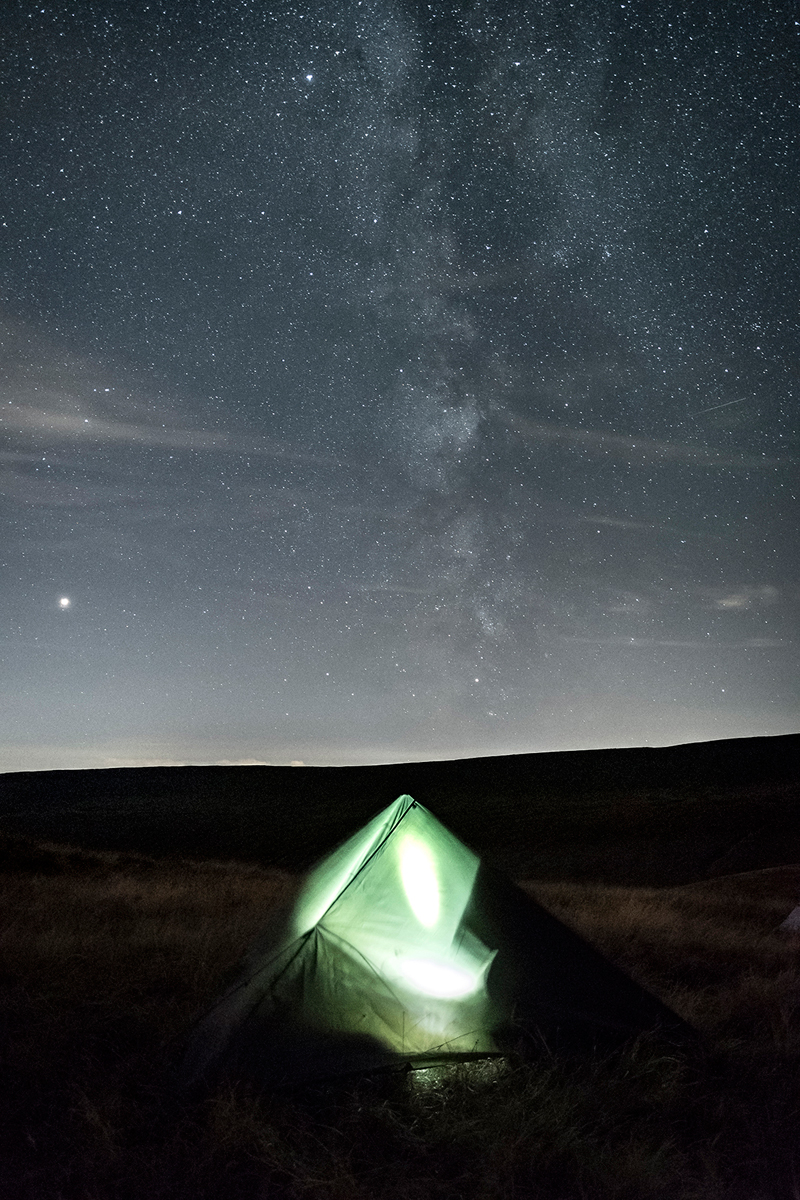 The SOS mode was visible over a mile away as they sat below the summit of Cribyn as I came up to Corn Du from the car park so if you are ever in need of rescue the SOS mode is very visible and bright. With constant use I found there was no change in brightness and maintained a constant light until the battery was nearly dead.

The other two modes - half and dim were useable. The dimmed mode less so outside, this was useful inside the tent and smaller spaces. Outside of this the light was lost and you could hardly see where you were going.

It's very easy to cycle through the modes as well with only one button on the top of the lamp which you simply click through each mode and holding down the button top you find the green button now glows red, this is to indicate the motion sensors are active and this will adjust the lamps according to light and distance. The motion sensors and auto dimming are especially helpful for runners in mixed lighting conditions through woodland or towns or for climbers when you want the lamp to adjust when you turn or look further afield of the face. 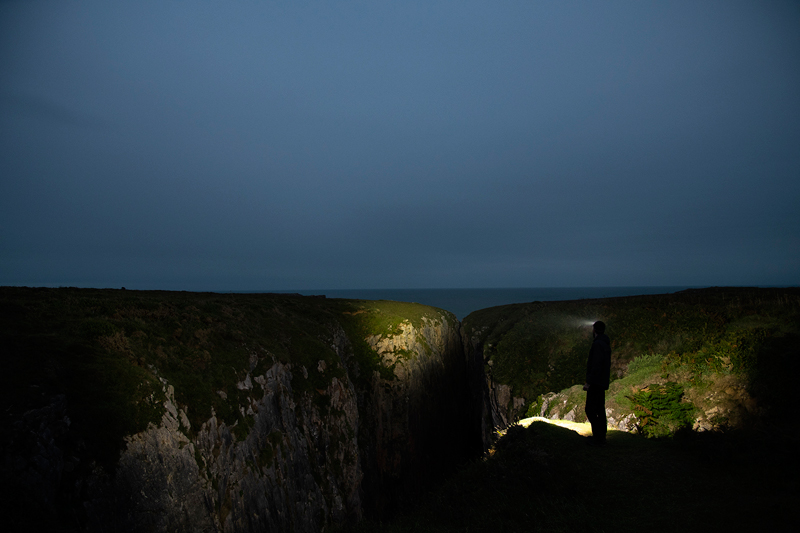 The sensors act fast and don't feel sluggish to react when changing, in a few seconds the light automatically adjusts to the correct or what I felt adequate light for me to see at close distance or further afield. For the sensors to work it worked best to point the lamp at the direction and pause for a second as it adjusted then carry on, rather than waving the lamp around aimlessly hoping for the sensors to react.

The lamp itself is very comfortable to wear on your head, I've found some headbands can rub or snag eventually and the fabric can cause irritations making them uncomfortable to wear. I had no issues with this with the band and even in use in the cold or wet the band remained secure and fixed. The band itself is reflective which adds to security and will be especially useful for runners when the nights draw in or for now in Summer helpful to find the lamp in your rucksack. 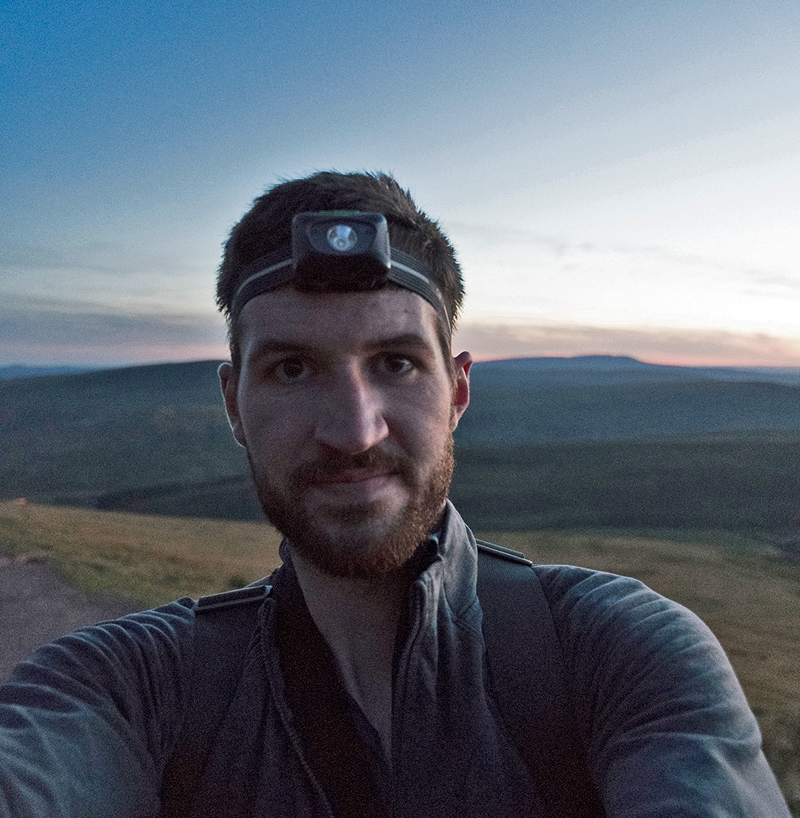 It is also lightweight and doesn't feel awkward or heavy to wear like some lamps can. I've got a number of headlamps, some with battery packs on the back or just on the front as this does and some can feel heavy on one side. The PHR15 feels secure in its fitting and where it sits, as a whole a well-balanced product, ideal for any activities in general not just running or climbing. The headband can be adjusted so it can stretch further and can be used on a helmet if required.

I've dropped it several times as well as dropping gear on top and the housing and front elements are both intact still, the waterproof housing has helped strengthen the lamp as a whole and I don't worry about the lamp taking a beat in and will last. It's very well made as it has stood up to a fair few heavy rain showers now and cold nights and not suffered any power loss or issues in the damp so if you are caught out in a storm whether it be rain or snow the PHR15 is tough enough to survive the night/storm.

The PHR15 offers a respectable 69 hours of run time. This is ample to last you through a couple of days usage without the need to charge but will easily see you through the night. However, I wouldn't want to rely on this lamp as my only source. When I left the lamp to run on full it lasted 9 hours before the red warning indicator came on alerting me of low battery, by this point it wouldn't run on full power any longer. In fact, it was only dim or off.

So, to make it last the full 69 hours you will need to use it on its dimmed setting which as I found in some situations just isn't bright enough to be wandering around coastal or mountain paths. With 10 hours run time on full power this should be plenty to get you through the night and get to a point to recharge the following day. 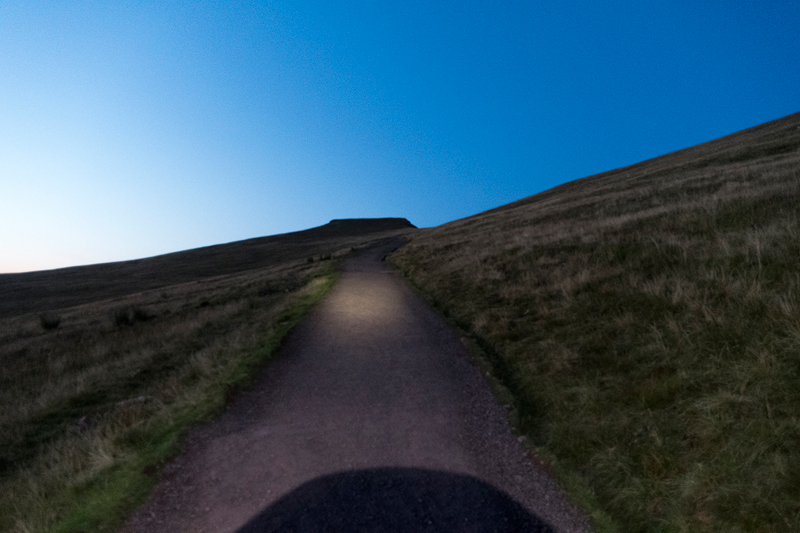 Compared against similar priced models and competitors the GP Batteries headlamp is sat in the middle with features and battery life. Most at this price point (£34.99) are waterproof too but not all have USB charging, offer 300lm and motion sensors. So clearly there is a compromise between the options, either more power or have recharge option so GP Batteries combination of the three at the same price point is great.

Personally, the biggest feature missing for me is the red night vision which most headlamps I've seen at this price and even cheaper offer this as standard but none at this level offer the sensors at the price of the PH15 300 headlamp which is retailed at £24.99. Motion sensors I have typically seen on the more expensive models.

69 hours is ample but it's not the longest lasting torch but at the price point it's a compromise that is acceptable. Similar priced models offer anything from 50-110 hours, again more expensive models will of course last for longer but equally are bigger and heavier with more robust and larger batteries and packs to last the time. 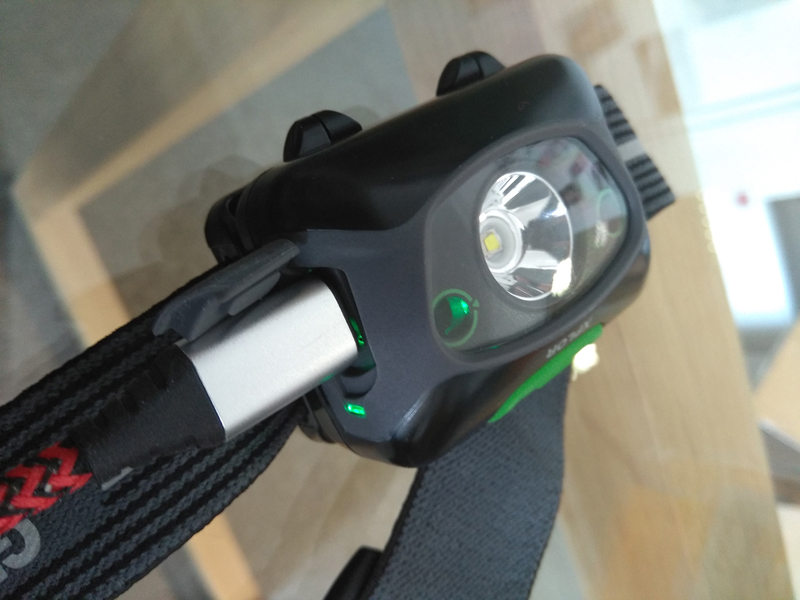 Each lamp from GP Batteries offers different elements, the PH14 although not as bright at 200lm gives users the option of a red night vision mode which I personally missed in the PHR15, the PH15 goes up a level with 300lm as with the PHR15 and both offer the motion sensors, but the real bonus is the recharge feature, giving it the all-rounder, anyone can use. 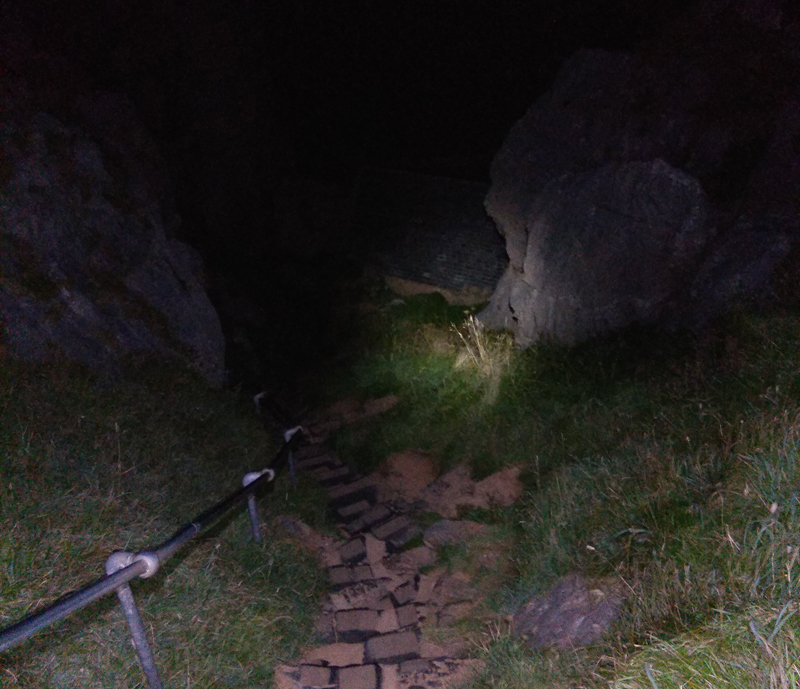 I still personally feel the lack of a red light is a shame in this torch and with it I feel it would had made it the full package. However, having done this would there be much point in the PH14 or PH15 in that case? Likely not but a red light is easy to live without. The recharge option for on the go is better for long trips away rather than relying on carrying space batteries all the time.

Lumens 22/25
Nice and bright on full beam and SOS mode. The dimmed mode is still bright enough to work with and continue to walk around with and gives you plenty of options for various spaces and locations.

Run Time at full 7/15
I left it on full and the torch ran for 9 hours before going dim and the red warning lamp on the side came on. I left it running the following day and it died at some point during the morning giving the total time at full power 12 hours.

Maximum run time 10/20
Not the worst battery life but not the best - 69 hours isn't long but long enough to get you through a couple of nights without worrying about charging the device. You can pick up similar priced headlamps with double or triple the power. It's saving grace is that it's rechargeable.

Durability 14/15
Tough and can take a knock and be thrown about. Drop test or throw test it didn't scratch or get damaged at * height.
In the rain it kept going and in cold conditions with condensation no issues.

Ease of Use 13/15
Super easy to use. One button on to cycle through the modes - Dim, full, SOS and off or hold down to activate the motion sensors.
To charge you simply flip the plug out of the side to reveal the micro USB port. The strap is easy to adjust to various lengths.

Features 9/10
The PHR15 headlamp offers 4 modes with the lamp - full, half, dim and SOS all encased in a waterproof housing and recharging option if needed via the micro USB. On top of this the motion sensors make it helpful for runners, cyclists or climbers who want a hands-free option.
It would have scored higher if the red light featured.

For the price point of £34.99 and what features this lamp packs it's a great package. Compared to competitors it offers some nice features other lamps don't but at a compromise of battery life but with a recharge option it's something easy to get over, especially with its fast charge on the go.
I wouldn't want to rely on this being my only torch for long trips but if I had two PHR15 headlamps, one purely as backup in case of something catastrophic happened but for the main simply relying on the Recyko batteries which can be swapped out is a lighter and better method. One set can be charging inside the pack whilst the other is ready to go. Less waste with throw away batteries. 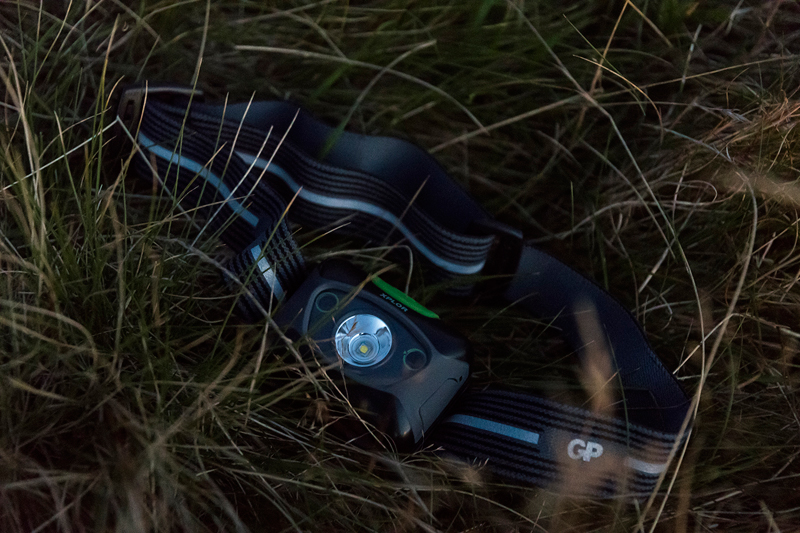 As a whole however I have felt very confident out on the hills at night and not need to worry about the lamp failing or running out of power.

They are lightweight, easy to use and durable headlamps coming in to a crowded and somewhat confusing area of the market with lots offering different features at various prices. GP Batteries headlamp range, especially the PHR15 eliminates this confusion in an easy all-round headlamp.

Overall very happy with this and look forward to further use in the coming months.