Stormin' Stoves are the work of one man, Norman Reeves. He has been refining this clever little stove system for several years and has earned respect from UK based ultralight backpackers looking to shave valuable grams from their pack weight.

Norman has taken a 'Make Your own Gear' (MYOG) approach to create a successful cottage industry making really affordable cooking systems. This is an independent review I offered to do last year and due to other demands on me it has by default become a long term reflection on how the stove works. 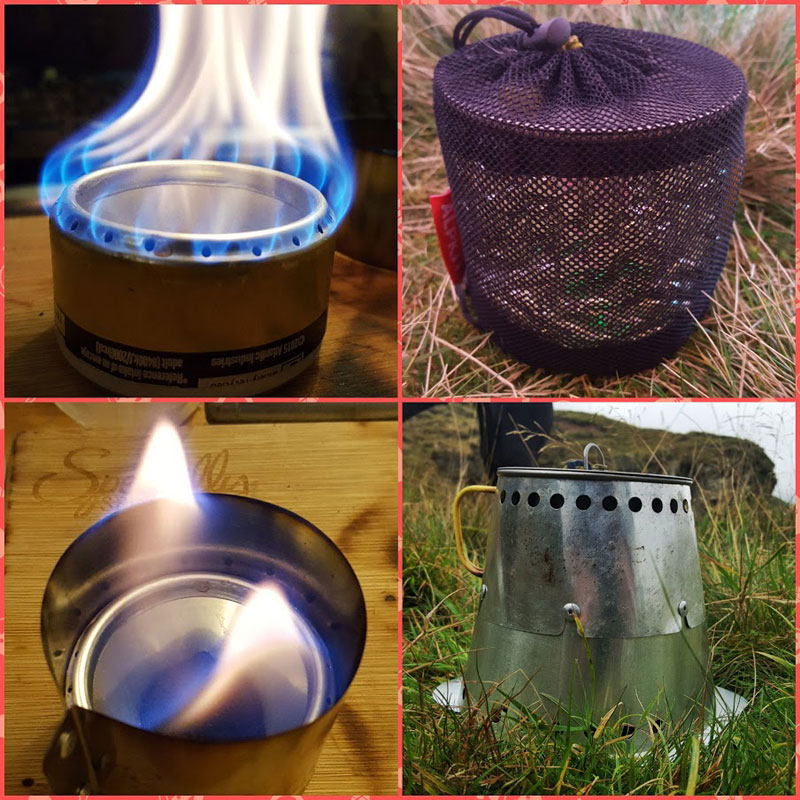 I have been using a Stormin Stove for over a year now, using it on three season backpacking trips and wild camping. I first bought an Alpkit Mytimug 600ml pot and ordered a stove to fit. I liked it immediately, but found the pot capacity too small, so I ordered a 900ml Alpkit Mytimug and another stove. During this time, there have been some changes to the cone made by Norman, as he has evolved the design which has made it easier to assemble and use.

There is nothing new about cone based alcohol stoves and in this sense, Stormin' Stoves is not trying to re-invent the wheel here. What makes the stove stand out is its lightness, compactness and the custom built options available. Stormin' Stoves make you a cone to fit all the titanium kettles and pots on the market. You just send the dimensions to Norman and he builds you a bespoke cone. You aren't restricted to using just titanium pots, but there are clear weight advantages in doing so. Secondly, the cone splits and stores vertically in your chosen pot, thus protecting the light aluminium or titanium and saving space. It is possible to put the burner, cone, lighter/matches and a small fuel bottle in a larger pot. I manage to fit in coffee and sugar and more besides in the pot for transportation.

The most expensive part of obtaining this stove is going to be a titanium pot. The aluminium version of the stove including a burner is just £18 plus postage on the website and I like the MYOG small business approach Stormin Stoves uses. There are also other pot-hugger style stoves available and if you're feeling like splashing out, a titanium option for building a cone.

On test with My Outdoors

The cone is split in two pieces and assembles using the rivets on the base section, slotting together to create a very stable pot stand and windshield combined. The heat shield base protects any dry grass, reducing fire hazards and maximises heat inside the cone. After lighting the burner, you simply slide in your pot of water or food and the weight of the filled pot means the whole thing stays put, even in winds. 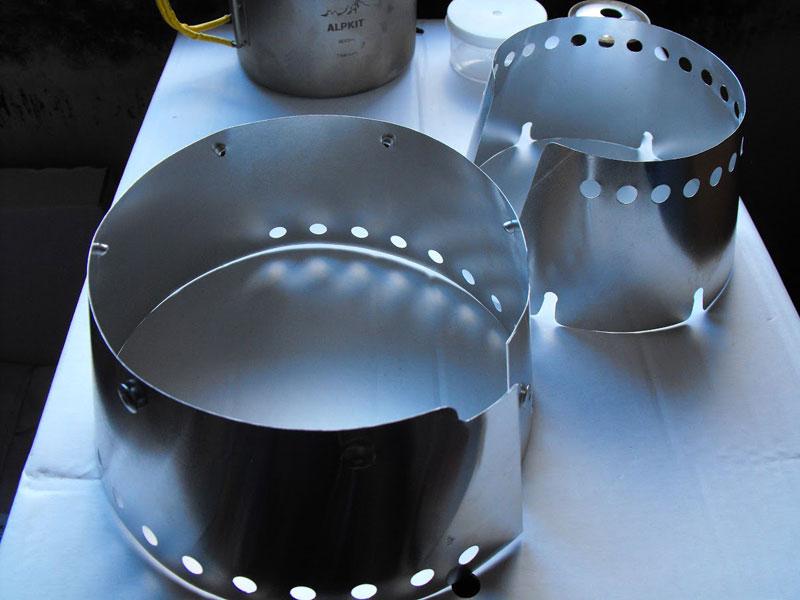 That said, I've had to chase the cone across a hill once after the wind took it, so it's worth bearing this in mind as you get ready to cook. It is possible to peg the cone down using the lower vent holes. For more fuel efficiency it is preferable to cook in the lee of the wind, but the stove does work reasonably well in a light breeze due to the flame being above the air intake holes at the base of the cone. The flame pattern is broad enough to lick up the sides of the pot I use, and this heat is trapped by the conical structure making it more efficient. This effect is accentuated by the lip of the pot meeting the cone, creating a decent join that's stable and traps more heat. 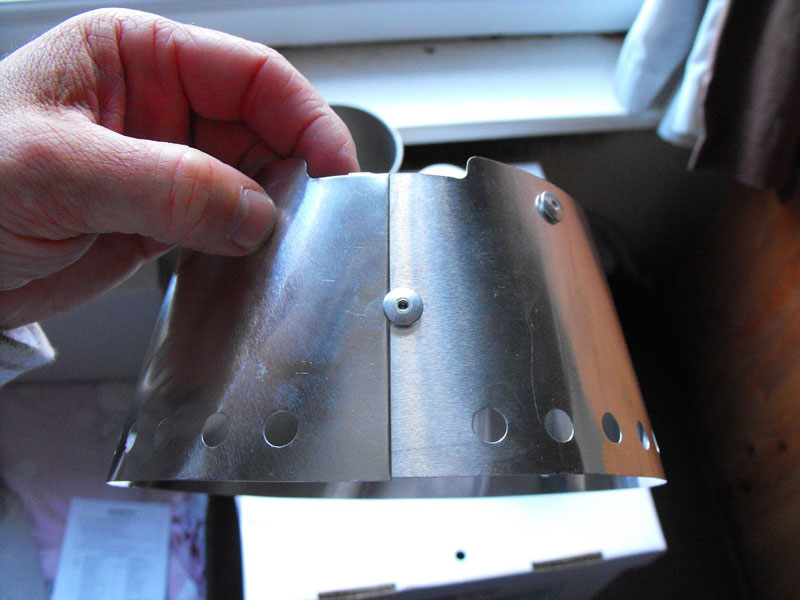 The original burner has a simple mesh cover over a fireproof wick material. It is spill-proof, meaning cooking in tent porches is a lot safer. You can fit 30ml of ethanol in the burner, which gives a maximum burn time of 18 minutes. The times are approximate, based on the weather conditions and temperatures you may be operating in. The original meshed burner also has a simmer ring option and as pictured, works differently to the new burner by just reducing the flame size. This works well on dishes that need longer in the pot and reduces the risk of you burning food hard onto your pan. The simmer ring can be taken on and off while the stove is lit with a simple hair-clip, which also keeps things light. 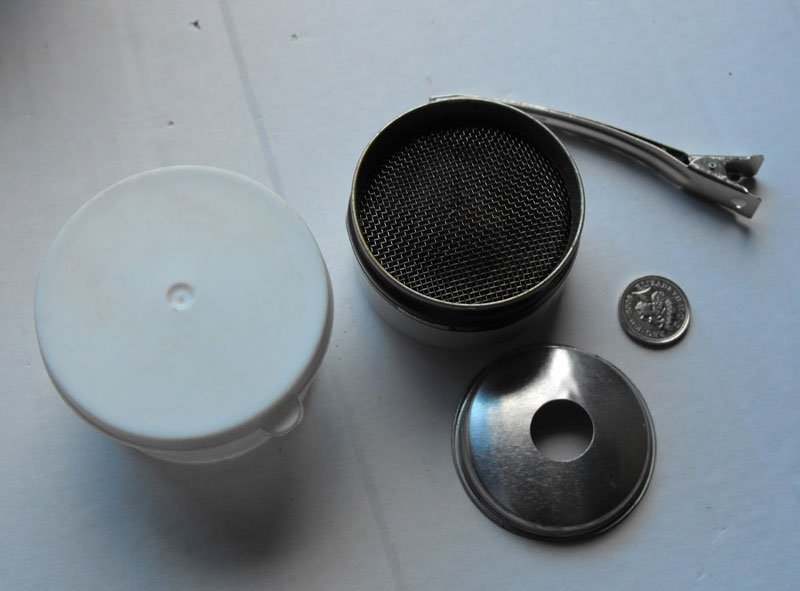 Stormin Stoves' has recently developed a new burner, with a central reservoir and jets that make an impressive flame from such a small stove. This comes with a spill-proof carbon material in the reservoir and 20ml of fuel will soak up entirely into this medium.   It is much hotter than its predecessor and as the fuel heats inside the wicking, the pressure will force the flames to the jets in less than a minute. Again, air temperature and wind play a large role when trying to measure efficiency. 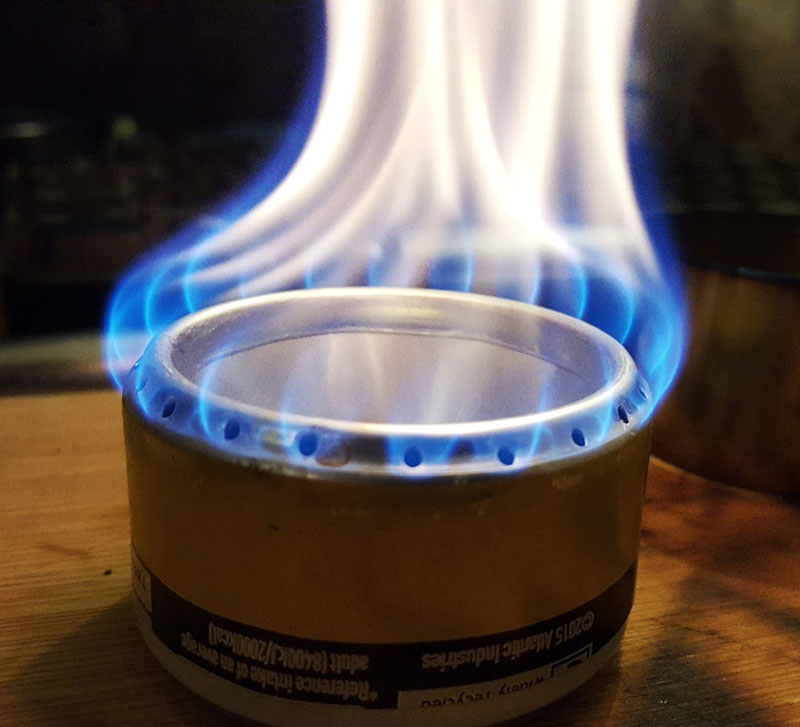 In this article I'm trying to spare some of the more dry technical data, but I've boiled 500ml of water in 5mins 40secs on a camp this autumn with air temperature of 5 degrees C, which is a distinct shift of up to five minutes on the previous burner on offer. Indoors, you can expect a boil time of about 5mins 10secs by my testing.

You don't get the rapid boil times of gas, but personally I'm happy to wait for longer while wild camping as long as in temperatures above zero, due to there being always something to sort out with while you wait or an amazing view to look at. The new burner has certainly been speeding up boil times while not creating a drastic increase in fuel consumption. I can manage three nights away, eating trail meals and carrying 350ml of fuel and it's highly likely I will return with some unused. You will possibly need more fuel if you're a brew monster.

Added to this new burner is a titanium 'simmer-ring'.  It simply slides around the edge of the burner and you need to mark the sweet spot to slide it to, thus impeding the flames and calming the jets. 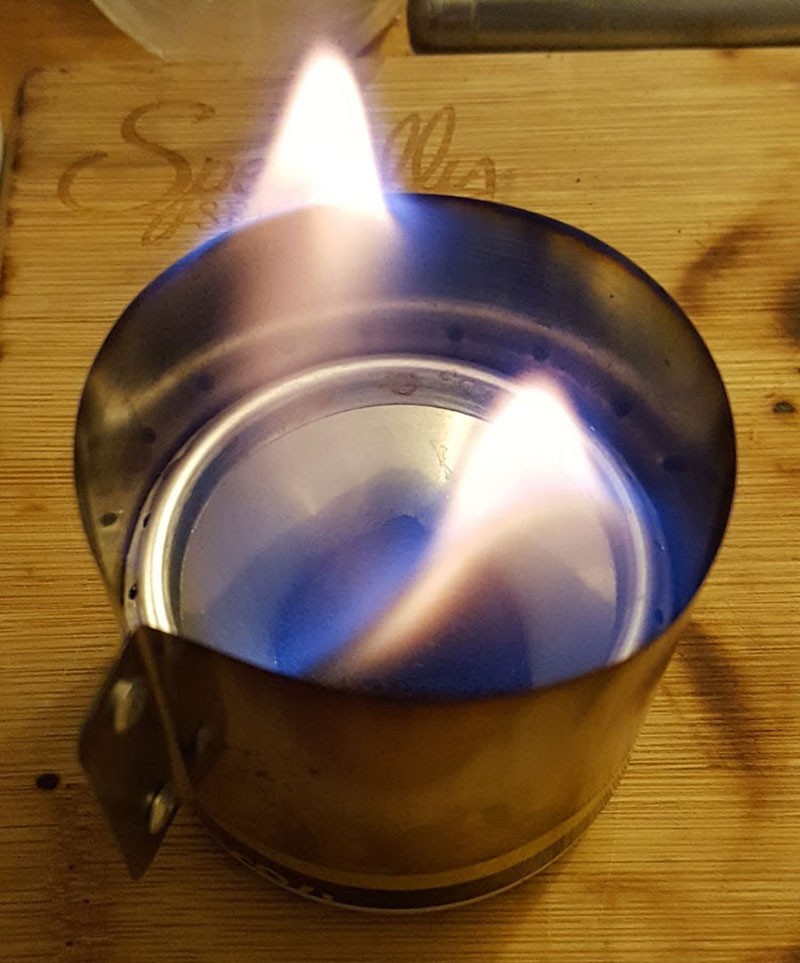 This enables you to slow simmer dried meals such a pack of rice or cook more complex one pot dishes with fresh ingredients for example. You can make a 'bain marie' and heat pouched wet food over the simmer option. I even heat up too chilled red wine at night with this method. Used without a simmer ring, the stove will create a vigorous rolling boil.

Both burners are made from 'up-cycled' G&T style drinks cans, so sit nicely with anyone looking to minimise waste and this helps the manufacturer keep costs down. Avoiding using gas canisters is also more eco-friendly.

As mentioned already; the emphasis on this stove hasn't been to reinvent something and there are plenty of examples of drinks can stoves for alcohol. It just works well, is tiny and comes in its own watertight plastic tub that helps preserve fuel if you haven't burnt it all off. As far as fuel choice goes, I only use bio-ethanol in this burner, as it is cleaner in smell and leaves no residue from the minerals found in methylated spirits.   Bio-ethanol also burns hotter and more efficiently in this stove system

The real test is to get it to ignite efficiently in winter temperatures and I am going to try this winter season. The trick will be to keep the ethanol warm in a pocket and to heat prime the stove, so more on that in coming months. 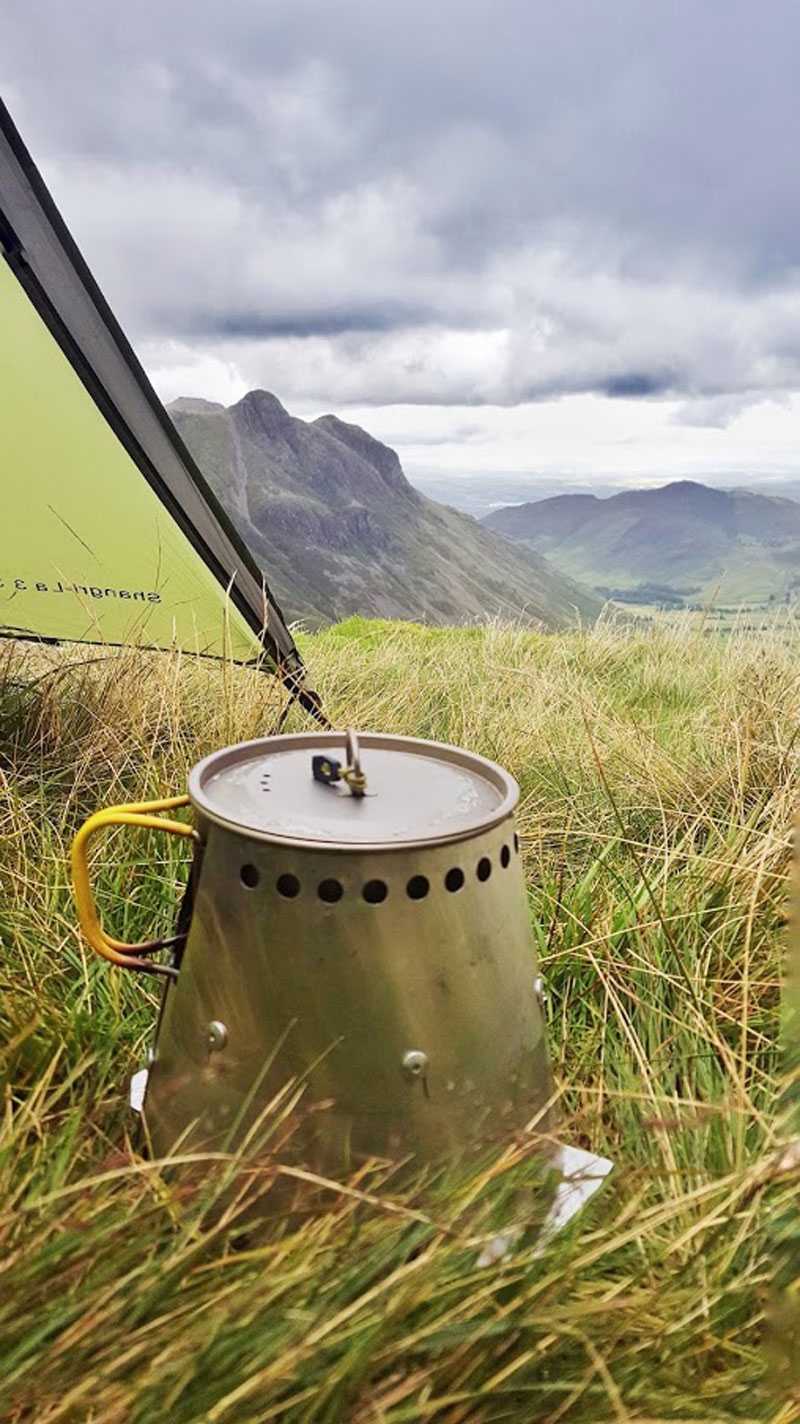 Many lightweight backpackers on longer trips are eating dried foods. If you like a massive fry up or a steak while camping or other, then this stove isn't cut out for that. It is primarily designed and perfect for boiling decent amounts of water for drinks and pouched foods. You can also reheat wet food of course, straight in the pot if you don't mind washing up.. That said, if you think out of the box it is possible to cook fresh food on the Stormin cones, especially as the new burner kicks out a lot more flame. I have successfully made a prawn noodle stir fry while out in the hills, by carefully using the lower section of cone as a frying pan stand. While it lacks the sheer heat of a larger burner, it's ample to cook certain easy foods in sheltered conditions. This all depends on your culinary skills or inclination of course, but unless you're on a weight saving mission it's nice to take fresh ingredients and plan a meal.

I have spoken to some people about alcohol stoves and to the uninitiated or 'gas-phile' they can be a bit intimidating or just a bit of a 'faff'. Any cone based burner is more of a fiddle to set up, compared to a Jetboil or similar, but what you get with this stove is a really cheap option to go ultralight with your cook-set and it works; be it in a tent or just having a brew at a summit while out walking. With little practice it's easy to establish a routine using this type of stove. What you don't get is an unbreakable or extremely robust , so if you're a bit clumsy they're best stowed away after use, because one foot in the dark is all it takes to make breakfast a difficult proposition. Cared for properly, there's no reason why a Stormin Stove won't last years though. 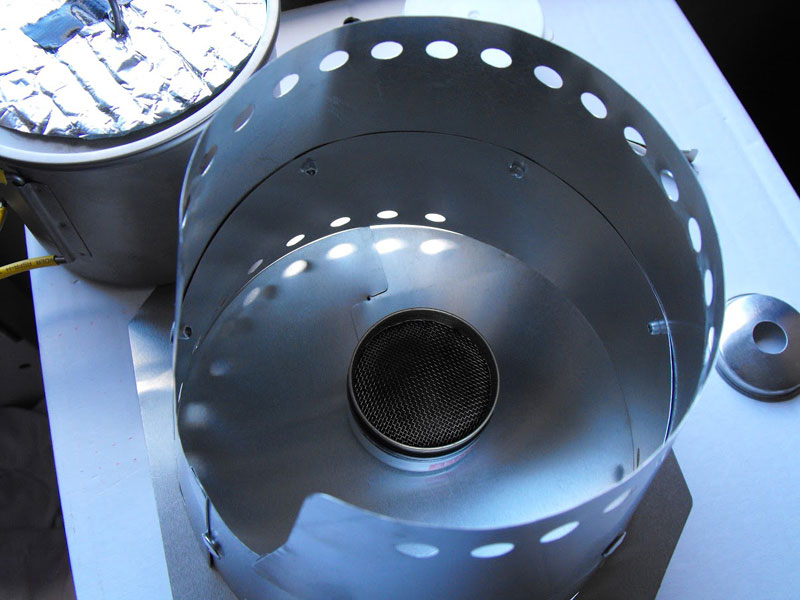 Overall I like the Stormin cone and it is an essential part of my ongoing kit for backpacking.   It has its limitations; as I mentioned it is not super strong due the light materials and it will struggle to cook effectively in lower winter temperatures, but it was not designed primarily to do that job. Another consideration is; If a newbie, you need to get used to a stove of this type and a learning curve is definitely on the cards to a degree. It's really simple though; As long as the burner is clean it will just work and the system lacks any of the maintenance issues of a multi-fuel stove. What you don't get is an unbreakable or extremely robust system.

My basic set up, minus fuel and sundries, weighs 230g grams and is a decent foray into ultralight cooking on the move while staying on a great budget. For me, it has helped make the perfect transition from heftier gas set ups to a 'one pot' solution.

"I just think he's a crazy person that you tend to like"....Quote of year by @alanhinkes' grandson in @terrybnd's biopic