Highland Kings, a premium events company, were on the Isle of Arran last week and the ripple of their event has been heard across social media as images emerge of the markings left on the rocks used to guide their participants. 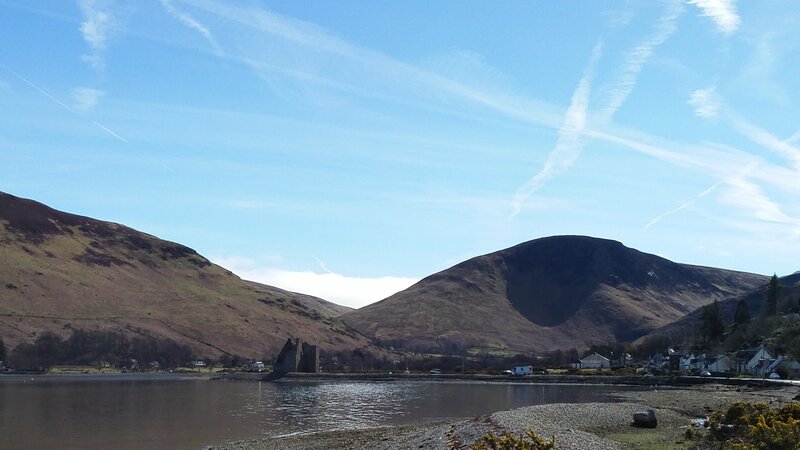 The event took place between the 25th – 29th April, started in Glencoe and finished on the Isle of Arran. The reported entrance fee of £15,000, which gives you a 7 month preparation, with access to personalised coaching to prepare for the 4 day adventure. Only 40 participants are due to start next years event.

The Highland King website boasts a substantial team roster, from ex-special forces, performance coaches from premium motorsports brands, to Michelin-starred chefs. Transfers to the islands are by speedboat and the accommodation at the end of each day ‘luxury’. Sir Ranulph Fiennes, an event ambassador, has a testimonial on the homepage : “A pioneering Ultra. Bringing together the best of Scotland to deliver a unique luxury, endurance and immersive wilderness experience.”

Over the weekend the legacy of this years event has started to unravel. Images emerged of yellow markings showing the route used across Arran. The event organizer has put out a statement that they marking have been removed. 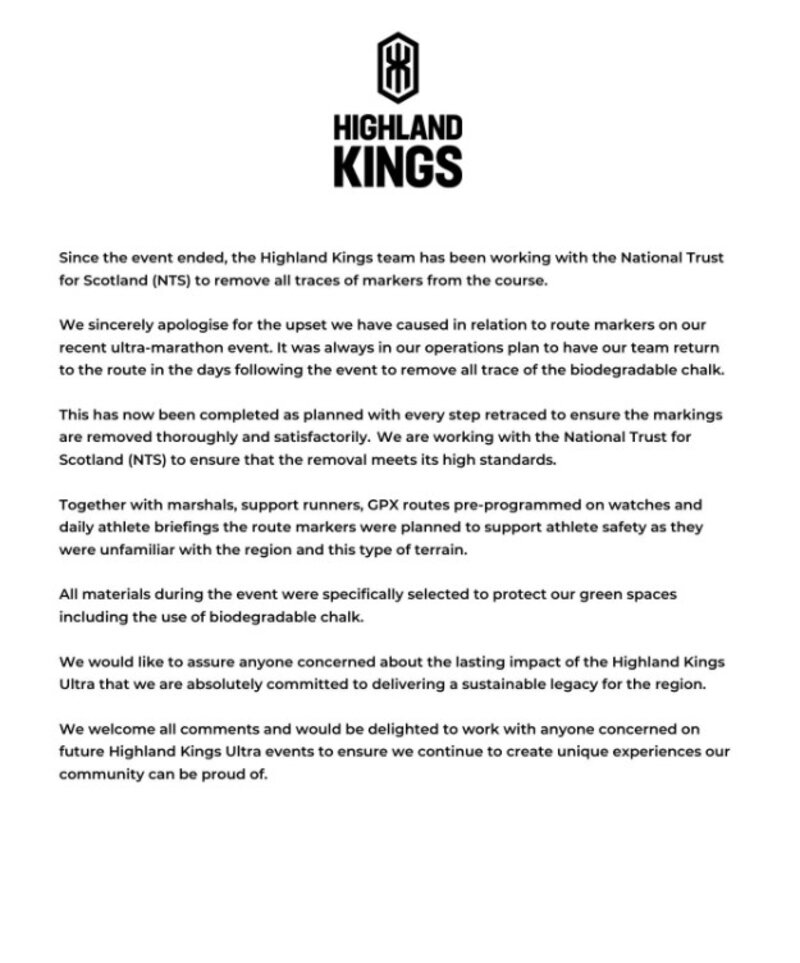 "As previously expressed, we were concerned to hear that the organisers of last week’s endurance event at Goatfell had applied chalk caulk to rocks as route markings.

“Unfortunately, the Land Reform Act 2003 gives us no authority to control the use of open landscapes for events of this type and scale. Nevertheless, we were very disappointed given that we had made prior contact with the organisers and had asked them not use signs or drones on the hill and were told that there would be no signage at all but people marshals only. We also made it clear to them that we expect all events on Trust land to be operated on a 'leave no trace basis.' We were subsequently in touch with them to remind them of this and to say that our expectation was that they will take steps to remove the markings and ensure no damage to flora and fauna.

"Since then, some of the markings were removed but it seems not all. Our local team has been in constant touch with the organisers and our solicitor is contacting them once again with a request that they ensure the job is completed.

"Lately we've heard that the organisers have said that all markings have now been removed. Our Ranger teams will be going out to verify this over the next day or so."

The north end of the island is a National Scenic Area, which is a conservation designation by Nature Scotland and the Scottish government. The Highland King website says that “the organising team are committed to minimising all impact from the event making it one of the most sustainable endurance events in the world.” This is a big claim for an inaugural event, especially as they are using speedboats to transfer participants. The biodegradable chalk reportedly used for the yellow markings is what has highlighted the event to the forefront of social media at the moment. It would be interesting to know what brand was used? Any biodegradable marking paints I found online have no clear details of what potential impact they could have on flora and fauna as they are washed off naturally or during the course of the clean-up.

Assuming the description of the substance used being chalk based, that also creates questions of its effect on both lichen growing on the rocks and and the soil.  Chalk is a base, with a pH of 9.1 and is almost totally insolubale in water. This means any runoff from rainwater or from attempted cleaning would raise the pH of the soil and impact on the local micro-environment. If the chalk is gypsum based, a common alternative to Calcium Carbonate, it won't raise the pH as much but is more dissolvable. Either formulation has the capacity to impaqt on fauna and flora.

The only area highlighted at the moment is Arran, however, there were three days prior where the participants travelled across other parts of the West Coast of Scotland. Although in the statement from the NTS, they were told it would be marshalled by people only. The images online are definitely to the contrary.

The bigger issue will be to the reptation of the adventure sports industry as a whole. There are several events organisers doing great things and having very little impact on the environment they are operating in.

We watch on in anticipation as the Rangers of the NTS inspect the National Scenic Area over the upcoming days.

More in this category: « Wild camping - a fight or flight dilemma
back to top