Day three was the longest of the 2015 Berghaus Dragon’s Back Race, with competitors facing around 68km to complete when they set out from their campsite.  Although the route took in some serious climbs (six peaks), it also included plenty of stretches of runnable terrain.  However, the cumulative effect of the previous two days and the sheer distance of the third leg took their toll on competitors. 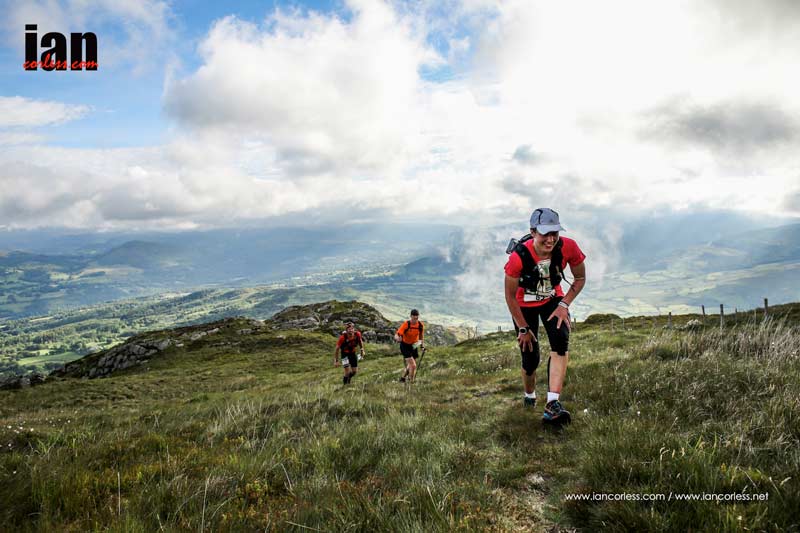 At the front of the field, Jim Mann (25:01 hrs) continued to run strongly and extended his overnight lead.  There is now a gap of over 90 minutes between Mann and the second place runner Jasmin Paris (26:36), who herself is almost an hour ahead of third placed Konrad Rawlik (27:24).  Third in the men’s race is Damian Hall (28:12), while there are two other women in the top ten, Beth Pascall (28:18), who was the fastest lady on the day, in fifth, and Lizzie Wraith (30:30) in ninth.  Many of the women in the event ran very well on day three and there are now six in the top 20.

Jasmin Paris commented: “It was all about staying in one piece today, as two days is still a long time to get through.  If you’ve got the energy left, then you can put in a challenge or try and push yourself harder in those last two days, but I think that today was a little bit more about conservation.”

Jasmin Paris, going strong on day three of the 2015 Berghaus Dragon's Back Race

After day three of the 2015 Berghaus Dragon’s Back Race, only half of the original competitors are still in the full race, as one of the hardest mountain events on the planet continued to live up to its billing.

Race director Shane Ohly comments: “The race certainly confirmed its reputation on day three with the longest stage reducing the number of competitors by around 25 at the last count, all in just one epic day of mountain running.”

Runners have now started day four, with the first competitors setting off at 6:00am this morning.

For full accounts of the action to date in the 2015 Berghaus Dragon’s Back Race visit www.dragonsbackrace.com/news and for more updates and images, along with a selection of short videos fronted by Helene Whitaker, go to the Dragon’s Back Race Facebook page.  Follow live tracking throughout the race here, and keep an eye on Twitter for updates from @DragonsBackRace and @TheRealBerghaus, using #DragonsBackRace.