The sun shone on day two of the 2015 Berghaus Dragon’s Back Race, which presented competitors with a slightly longer distance to cover than on day one, but with less ascent.  The runners had to get from Nant Gwynant to Dolgellau, via the Moelwyn and Rhinog hills.  The heat, and fatigue following the first day, were major factors in how the racing played out, as was the fact that there were a lot more route options on offer, particularly between the fourth and fifth checkpoints.  This, along with the fact that the slower runners from day one set off first, resulted in a fascinating day for those following the race, as the consequences of the navigational choices that were made started to manifest themselves on the live trackers and leaderboard. 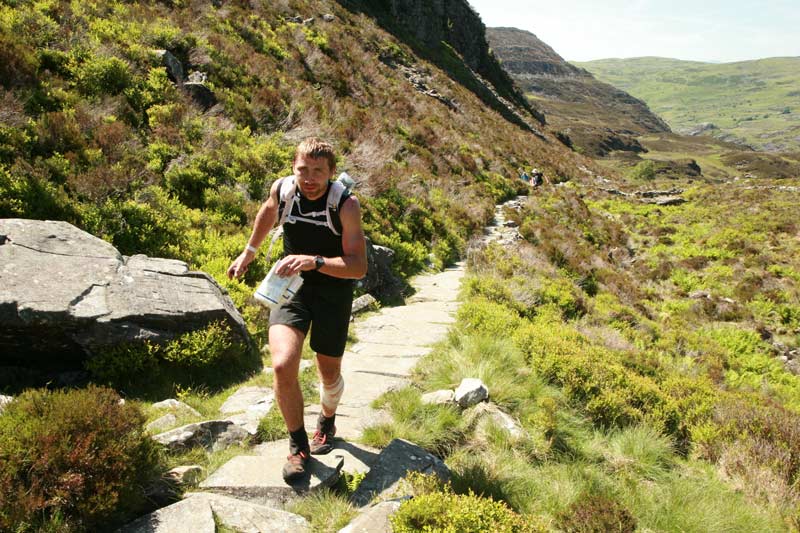 Leader Jim Mann once again set the fastest time and so increased his overall lead.  Jasmin Paris, who finished the day with Mann, moved up to second place overall.  Some of the women in the field had a very successful day, with Beth Pascall and Lizzie Wraith also gaining places.  After two days, six of the top 20 runners are women.

Although he lengthened his lead, Jim Mann did have difficulties, which he outlined to Rob Howard of Sleepmonsters at the end of the day: “At one point I lost the path and took a bearing but found cliffs blocking the way.  In the end I threw my bag and jumped down!  I think I’ve paced it well so far.  I don’t enjoy running in the heat so much and suffered a bit at the end of the day, but am told the forecast is more overcast for tomorrow, which would suit me.”

Jasmin Paris adds: “He (Jim) helped lead me over the Rhinogs and at the end when he was struggling more I encouraged and waited for him, helping him through to the finish.”

The event is starting to take its toll on the competitors.  There have now been 17 retirements from the event and, as was the case in 2012, there are also some who have not completed the full course and are therefore non-competitive, but are continuing to run.  Among the 17 who fall into that category is one of the pre-race favourites, Pavel Paloncy.  After a nasty fall on day one, Paloncy had his leg stitched and continued to run – he finished 11th on the day, very impressive in the circumstances.  A second leading contender was forced to retire on day two - Ed Catmur had a fall on the Rhinogs, suffered a bad cut and could not continue.

The runners stayed overnight at the Vanner campsite just outside Dolgellau, with the tents set up beside the ruins of Cymer Abbey.  Day three is now underway and the first competitors set off at 6:00am this morning.

Shane Ohly comments: "I expect day three to be the pivotal point of the whole race.  It’s going to be a very long, attritional day and I think we’ll have a better idea by tonight of who will be the potential winners.”

For full accounts from days one and two of the 2015 Berghaus Dragon’s Back Race visit www.dragonsbackrace.com/news and for more updates and images, along with a selection of short videos fronted by Helene Whitaker, go to the Dragon’s Back Race Facebook page.  Follow live tracking throughout the race here, and keep an eye on Twitter for updates from @DragonsBackRace and @TheRealBerghaus, using #DragonsBackRace.