It seems that no trip report or gear review is complete these days without some GoPro footage, so we asked one of the UK's top photographers, Henry Iddon, to put the latest, all-singing, all-dancing offering from Kodak to the test.

After the runaways success of Henry's Instanto project with a 100 year old camera it was interesting to find out what he made of Kodak's PixPro SP360 4K - which as the name implies can shoot full 360 degree video in up to 4K. 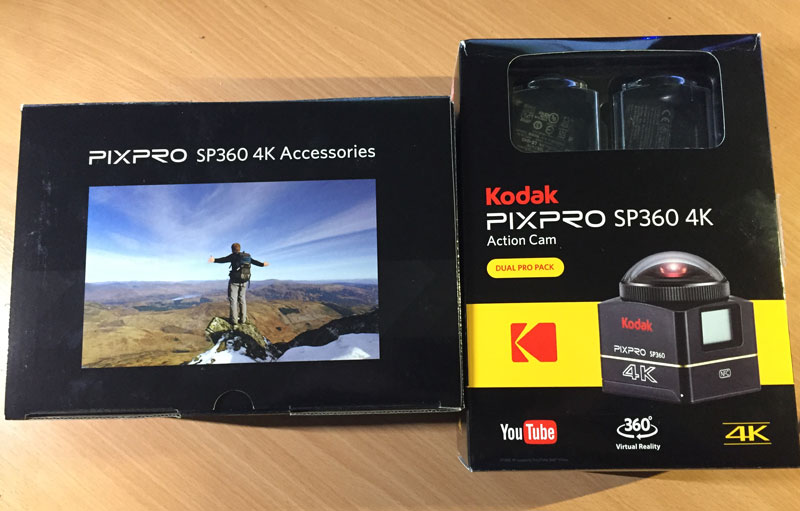 The term ‘panorama’ was coined in 1787 by English painter Robert Barker to describe his paintings shown on a cylindrical surface in his purpose built panorama building in Leicester Square, London. Visitors would step on to a central platform surrounded by a continuous painting depicting views such as the City of London or Edinburgh. The name panorama comes from the Greek word pan (‘all’) and horama ( ‘view’).

In 1843 Austrian Jospeh Puchberger invented the hand cranked swing lens panoramic camera, alas it only recorded a 150 field of view not a full 360. The invention of flexible film, as opposed to heavy glass plates, in 1888 allowed greater technical freedom and numerous systems were developed. One of the most popular was the ‘Cirkut’ produced from 1904 by the Rochester Panoramic Camera Company, which was eventual taken over by Kodak. By the 1980’s panoramic cameras were literally in full swing, with high end optics, electrically powered drives and full manual controls. These systems were only a 360 pano on a horizontal plane however, and were very expensive.

Fast forward to now and we have 360 monoscopic (2D) video available from lightweight cameras a few inches square, that since Youtube launched 360 viewing in March 2015, can be viewed world wide not long after being filmed. A concept that would have no doubt baffled Robert Barker.

So over one hundred years on from the ‘Cirkut’ Kodak know have the PixPro 360 4k camera. Well Kodak licensee JK Imaging. 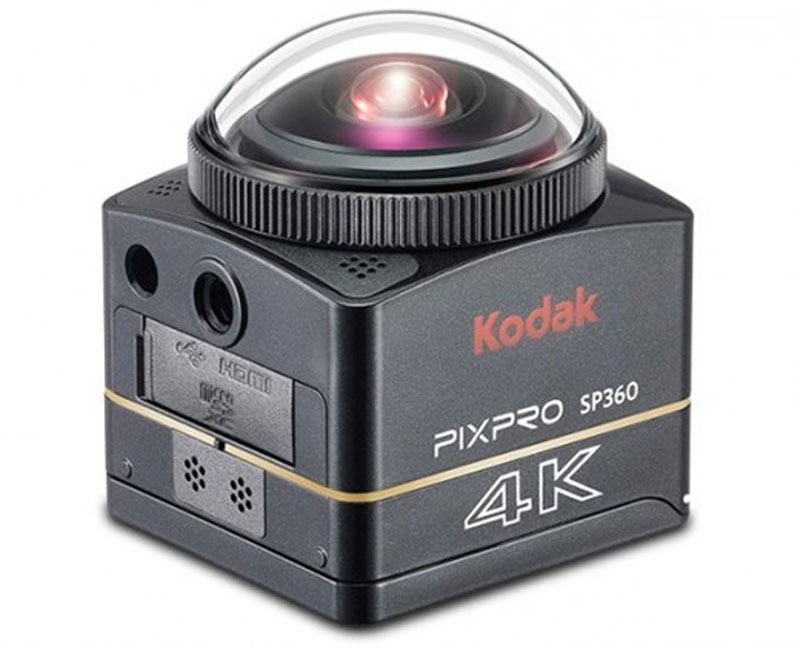 On the face of it the camera is packed with features - 12 megapixel CMOS sensor; dome shaped f2.8 lens, Wi-Fi and NFC to allow control from Android and iOS apps; 10 viewing modes, LiveView, Dome, Panorama, as well a motion detection. Content capture includes time-lapse video and image burst. 4k video is 2028x20128 pixels at up to 50fps, and 1280x720 clips at 120 fps , maximum stills resolution is 8 megapixels in 1:1 ratio. The unit itself supports numerous attachments and mounts including a waterproof housing. The info states it is targeted at the pro market, but I’d take that as those wishing to shoot interiors - estate agents, holiday companies etc. more than professional adventure film makers. Not that it doesn’t have applications for the outdoors.

So, what’s it like in use. Well the unit I was sent was boxed and good to go, all that is needed out of the box is a micro SD card for each unit. The cameras work independently giving 180 degree view, or various width settings, and for the full 360 experience are positioned back to back using the supplied framework. At pretty much 5cm square the units aren’t big until you put them back to back, by which time you’ve a reasonably sizeable unit. The weight of the units 127.7g each, is noticeable as well when they’re paired up for the 360 degree experience. Pretty hefty if you were to mount both on a helmet, but fine if using a light stand or the ‘selfie stick’ which come with the unit. 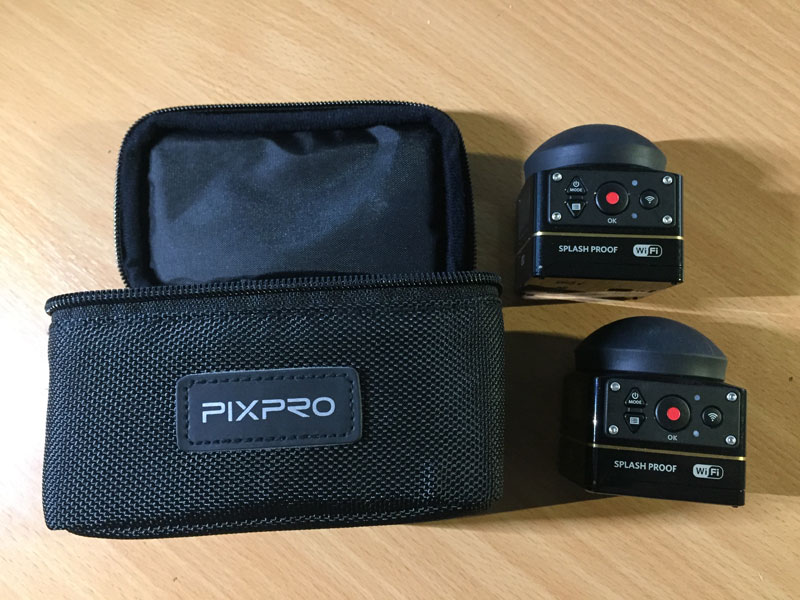 A quick start guide is included in the box (alas a previous tester had snaffled the one from the test unit I was sent ) so I was left having to download the pdf on line. Personally, I find such manuals hugely frustrating - often filled with flow charts on menu selection and instruction on how to carry out obscure and rarely used features it would be far better if a hard cop was included. I’ve often found the best way to understand new equipment is to put the kettle on and sit on the sofa. brew in hand reading the manual. With pdf download you’ve either to sit with laptop, at a desk or print of reams of paper. Having wrestled with the instructions I came to the conclusion that trial and error was the best way forward, supplemented with a google for some online tutorials.

The small info screen on each unit gives you info as to where you are in the menu and what setting you have live, that said the buttons are tiny making things fiddly There is a remote control wrist strap which seems superfluous and it was far easier to set things up via the phone app on my iPhone.

Field of view is obviously one of the main settings, and varies slightly depending if the image stabilisation (EIS) is turned on or off.

There is also a global or front setting.  ‘Front’ images and videos have the look of a standard POV camera. 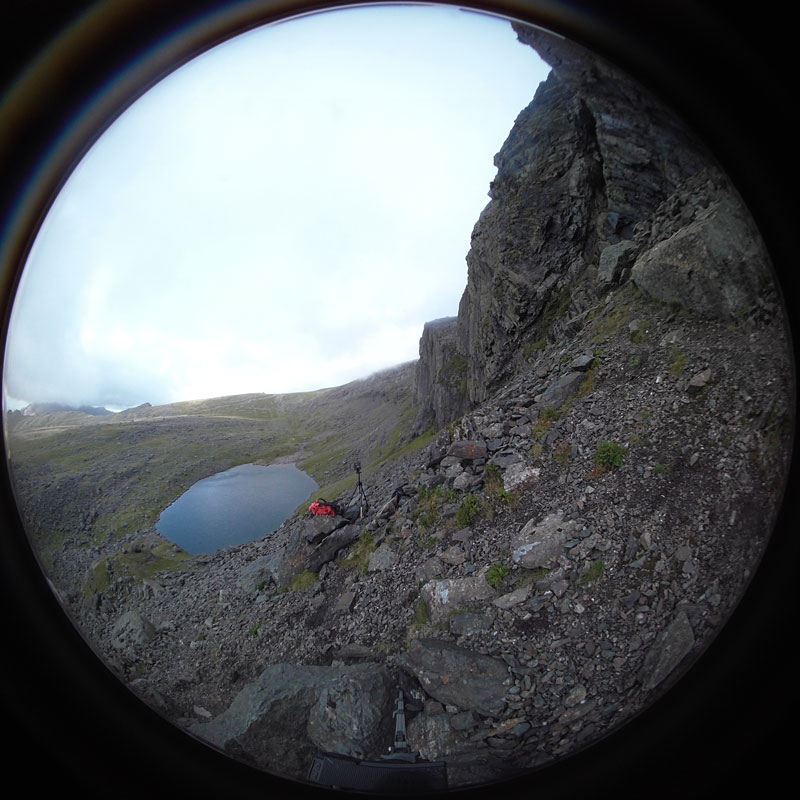 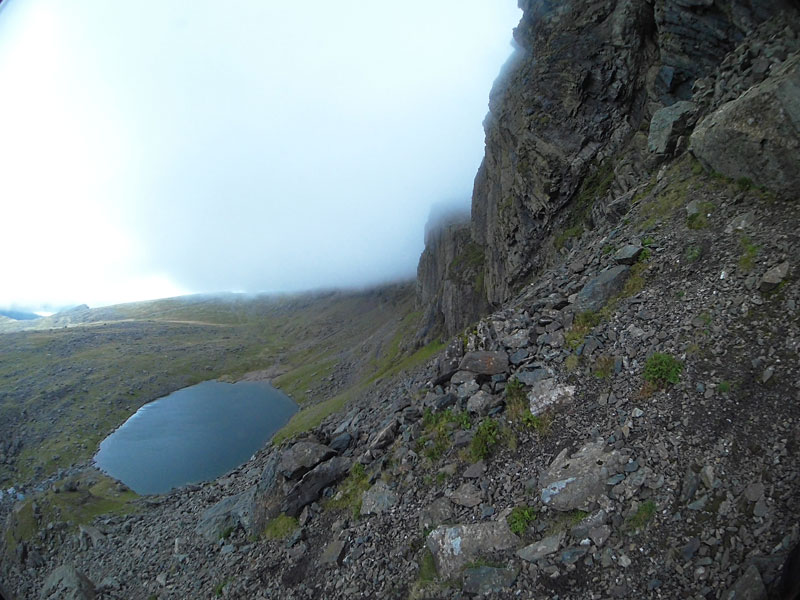 The same applies for video as seen with these screen grabs with the camera helmet mounted while doing a double polling roller ski session: 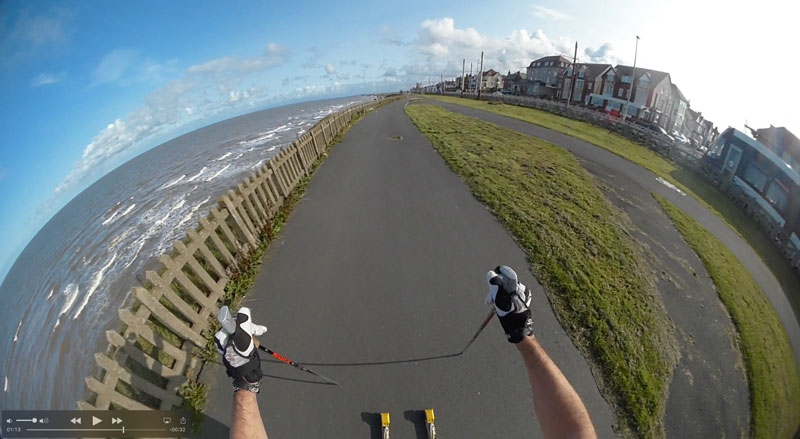 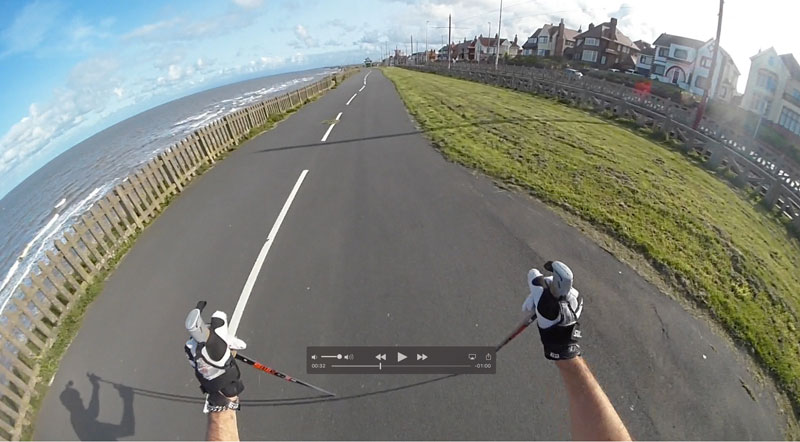 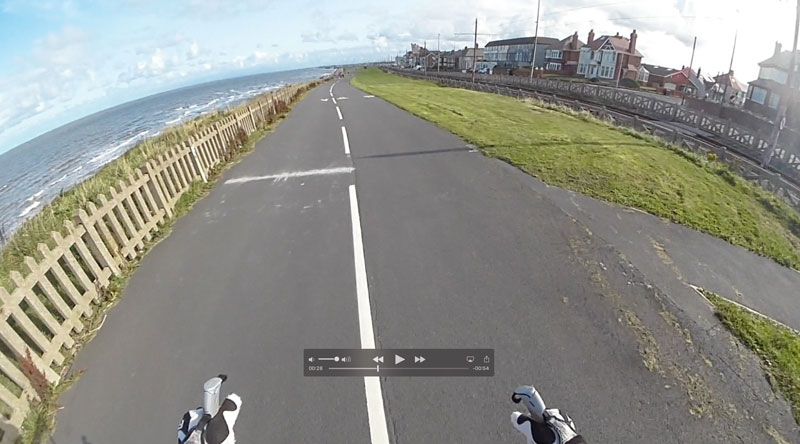 And this video on Ultra-wide which also indicates the microphone in use:

Full 306 videos are created by operating two cameras back to back and stitching together in the Kodak Pixpro 360 Stitch software. The software isn’t the most sophisticated and could be described as entry level, it does link directly to Youtube though which makes things convenient.

Other high-end editing options are available.

This 360 degree shot below Clogwyn Du'r Arddu on a dull August afternoon gives some indication of the quality and results with a basic edit.

The POV market is undoubtedly ruled by GoPro but to involve yourself with 360 you’d need six of them and a specifically designed rig. The Pixpro is designed with 360 in mind and the only competitor is probably the Nikon Keymission, meanwhile it is perfectly capable of producing ‘standard’ POV footage in ‘front’ mode. It’s build quality is good with a drop proof rating of 2m and being splash proof without the need for the specific waterproof housing.

Negatives would be the fiddly buttons, but that can be overcome by simply using the app and a telephone. Should you shoot a lot you’d need to carry plenty of memory or big cards.

On the positive side it can be fun, gives you ultra-wide stills and can add some variety to a photo album or trip video.

From an outdoor perspective the 360 degree video feature would come in to its own in situations where normal footage would be unable to translate the environment or situation - thing kayaking narrow gorges, ghyll scrambling, climbing, ridge walking etc.

More in this category: « Coleman Kickback Breeze Chair on test Petzl Gully v Petzl Ride: 2 ice axes, so similar but so different »
back to top