Oman by UTMB - from oil to adventure

When I arrived in the port city of Muscat, Oman's capital that’s wedged between arid Hajar mountains and the Gulf of Oman, I am greeted by Omanis cheering and whooping out the back of a car.

They’re not celebrating my arrival for the inaugural 50km Oman by UTMB race however, but (still) celebrating the country’s national day - and their sultan, Qaboos Bin Said Al Said’s birthday on November 18th.

Sultan Qaboos has been in office for 49 years and since the commercial production of oil began in 1967, he’s ploughed the money from it back into the country, from building roads, hospitals and schools to constructing the impressive Sultan Qaboos Grand Mosque which contains a 14m high Swarovski crystal chandelier and a 60 x 70m carpet, both said to be the second largest in the world - with enough room for 6500 men (and 800 women) inside.

The country developed in a short period of time, but managed to maintain its identity, unique culture, traditions and heritage, despite its 4 million people being made up of 2 million expats. It’s also been ranked by the 2019 Expat Insider Report, by InterNations, as the number one country in terms of safety and security for expats, and a regional high of 3rd for "safety and security" by the World Economic Forum in 2019.

But Sultan Qaboos knows that oil money won’t last forever, so the country’s been targeting a whole new market - sports and adventure travel.

And Oman has the terrain for it. Being placed at the mouth of the Gulf at the south-east corner of the Arabian Peninsula, it began with sailing. Then there’s scuba diving with whale sharks, or for cyclists, there’s the Haute Route Oman and road runners can take part in the Muscat marathon - and now, what I’m here for - the Oman by UTMB - the only event of its kind in the Middle East. 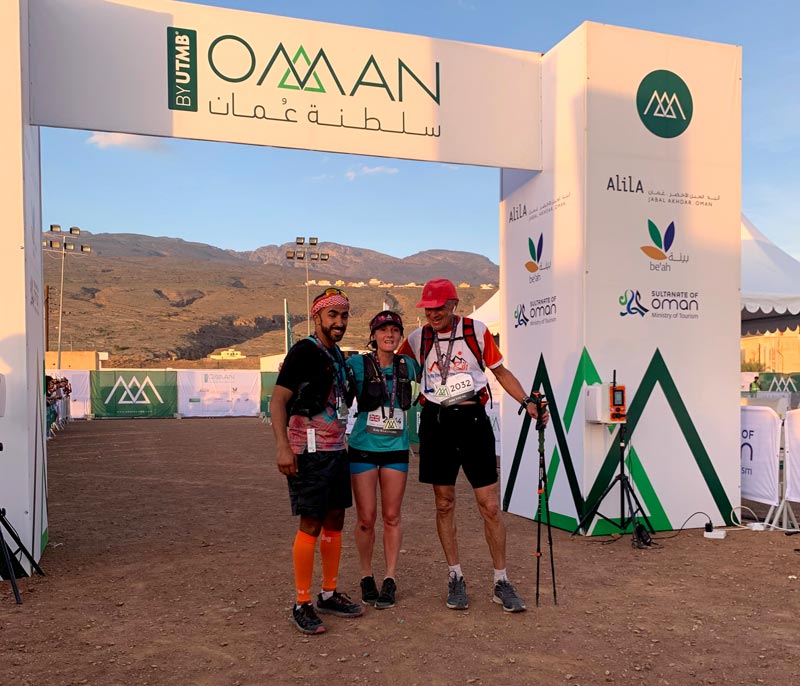 Running through the sheer-sided cliffs of the Western Hajar mountains, it’s a landscape that couldn’t feel further from the 583,000 square-kilometres of uninhabited flat desert plains of Rub' al Khali – the ‘Empty Quarter’.

But before I begin running, a bit of acclimating is needed. We are met for a hike just outside Muscat by last years winner of the 130km race (the only race on offer then) Jason Schlarb and his girlfriend, elite athlete Meredith Edwards, who finished third in 2018. 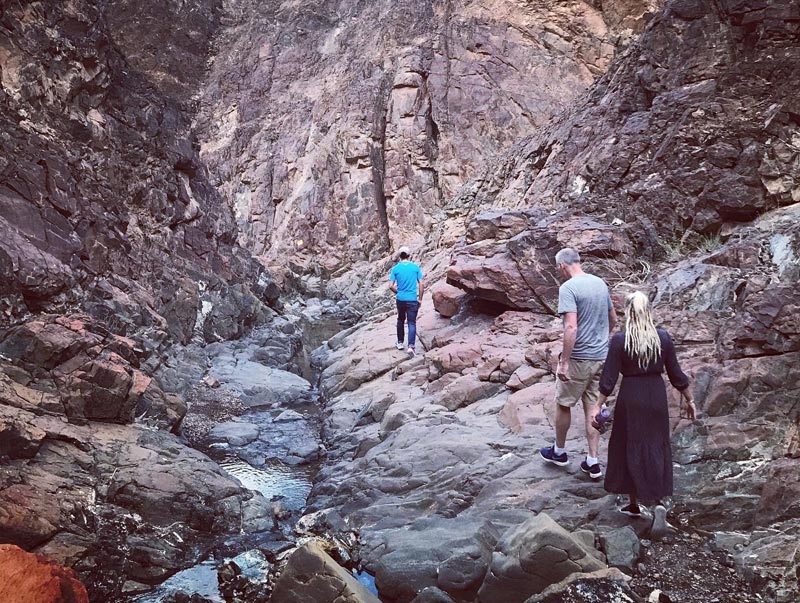 Meredith tells me she didn’t have such a good race then: “what is this?!” she thought at the time. But all the more reason to come back this year and battle it out again, this time coming in second in 26:18:06 - just minutes behind Italy’s Francesca Canepa who won it in 26:11:43.

As we scramble across the slippery volcanic rock, Meredith tells me her experience of running in the country. “It was humbling,” she says, in reference to the fears some Westerners may have of visiting a muslim country. “It changed my perspective and I was so mad when I got to back to the US. You need to be open minded..”

The next day we head to Wadi al Shab to take a dip in its tepid pools. Ellie Wall from Oman Sail, who organise the Oman by UTMB explains that this year, more than three thousand people have come to watch the race.

“At first people weren’t sure about it. But now it’s become the talk of the town. We had to take a delegation to see the race in Mont Blanc to understand what it’s all about and they came back with stars in their eyes.” 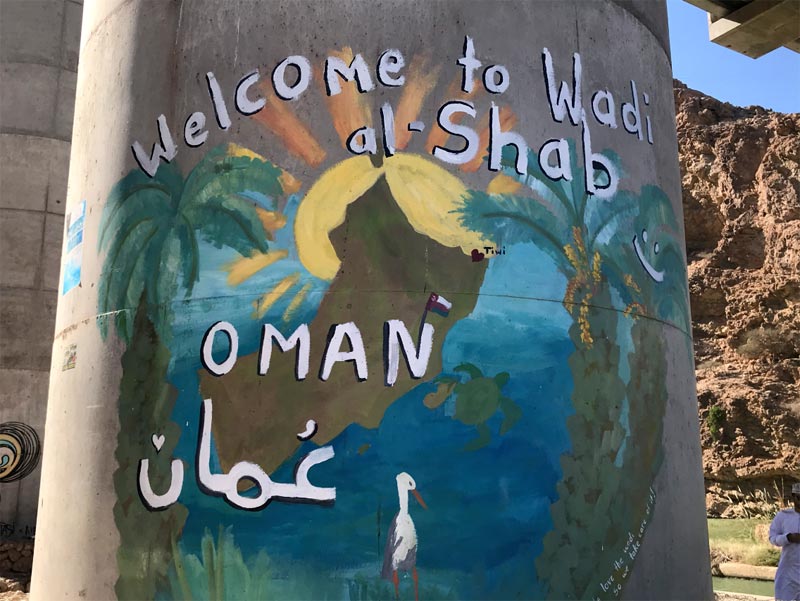 There are now about 900 Omanis taking part, including children in the new kids’ races and along the route at check points, around 200 volunteers - many from the local area - who hand out food and drink to runners, from sticky dates to bouillon soup. And they’ve been out in the mountains for months, marking the route out for the runners.

“When we created OMAN by UTMB with Oman Sail we knew one of the main objectives would be to get Omani people involved,” said UTMB co-founder Michel Polleti. “And not only will it help many people discover trail running but also for people all over the world the event is helping them discover this incredible country.”

Blurring the line between trail-running and climbing

Last year there was only the 130km edition. This year they added the 170km - arguably the toughest race on planet, the 50km and four shorter races designed to introduce people to the sport of trail running. 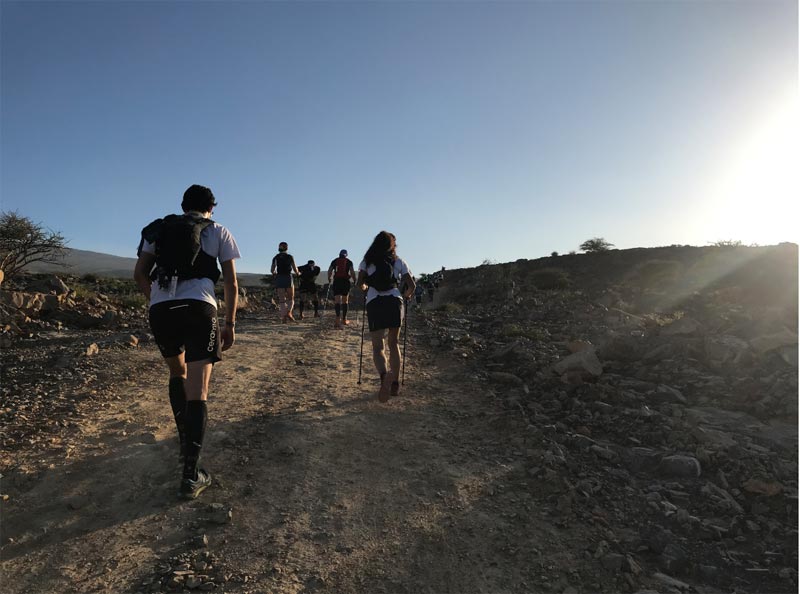 The 170km and the centrepiece 130km courses also take in the steep ascent of Jebel Akhdar, the Green Mountain and have a section up the country’s highest via ferrata (iron way) climbing route, leading up to the Alila Jabal Akdhar boutique hotel. Here some people, ground down, gave up and had a sleep or switched to the 130km. The 170km race finished off with the gruelling challenge of the 3,000m high Jebel Shams, one of the highest points on the Arabian peninsula. 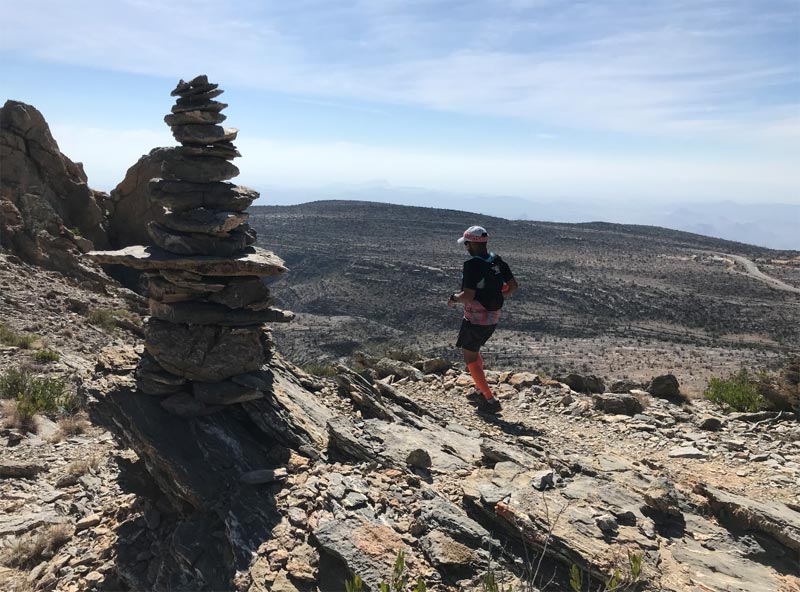 “I’m a runner - not a climber,” said one competitor, on this unique aspect of the race. Another said he was glad that section was in the dark for him, as he didn’t really have to take in what was going on around him!

At the finish line we are entertained with traditional Omani dancing, and we cheer the young Omani schoolchildren coming in from their races.

“Sport”, said Oman Sail CEO David Graham at the awards ceremony, “pulls together different nationalities and religions and this is an example of it.”

Oman by UTMB in Numbers:

More in this category: « Ultras at the double as iconic Cape Wrath Ultra and the Berghaus Dragon’s Back races will be held annually from 2021
back to top