It’s said to be the race made for Kilian Jornet, while others use it to train for the famous Grand Raid de la Réunion due to its similar profile.

Ahead of its tenth anniversary next year, L’Échappée Belle has introduced a new ‘small’ version of the race offering the best of Isere’s Belledonne region. And as Katy Dartford found out, it’s not the most forgiving of 21kms to come back to after a year of Covid disruption!

We’re guinea pigs for this is a new race, I’m told, as organisers don’t really know quite how hard it is yet. But how bad can the White Rock Skyrace (Skyrace du Rocher Blanc ) be?  What I hadn’t considered was that this course has 2000m of ascent squeezed into 20km - so it must be steep! I usually climb that much over at least a 30km distance. It’s also the first trail running race I’ve attempted since lockdown. That and a recently sprained ankle… But enough of the excuses - as I soon discovered, this new race of the L’EchappeeBelle series really is something else.

“How would you define your relationship with the rocks of Belledonne?”

Runners start at a ‘leisurely’ 9 am at the Fond de France in the Haut brada Valley and fortunately for me, I stayed overnight at Cévéo village holiday camp - located right at the starting line of the race. Over a thoroughly savoyard dinner at nearby Auberge Nemoz the evening before,  I’m told the race is steep, rocky and it never flows. I was also told that when (if?) I cross the finishing line I must ring the giant cowbell and write my answer to the question, posted on a whiteboard there: “How would you define your relationship with the rocks of Belledonne?”. I don’t really take this all in. I’ll be back in time for lunch, I estimate. 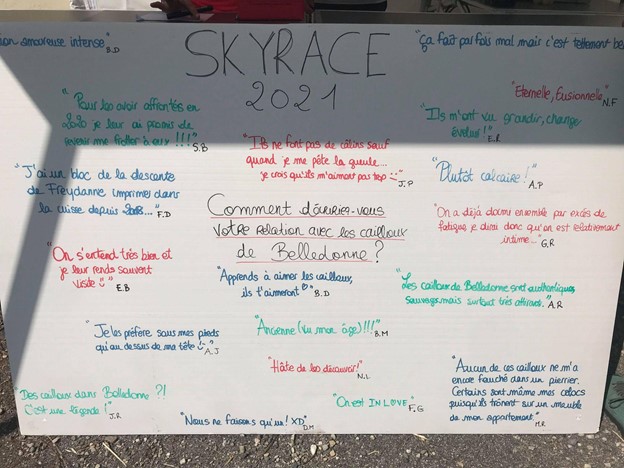 Unlike many of the races I’ve taken part in, the starting line wasn’t busy at all - just 135 runners for the Skyrace (including just 35 women) and a few locals to see us off. But I’ve learnt from experience that this usually means the competition is fierce, with mostly super fit locals taking part, unlike ‘bucket list’ races, which attract a much wider range of competitors. As we head off along a road then into a forest,  the steep climb begins immediately and I feel the impact of living at sea level straight away and curse my lack of ‘step machine’ training. Short legs are not built for these long strides! 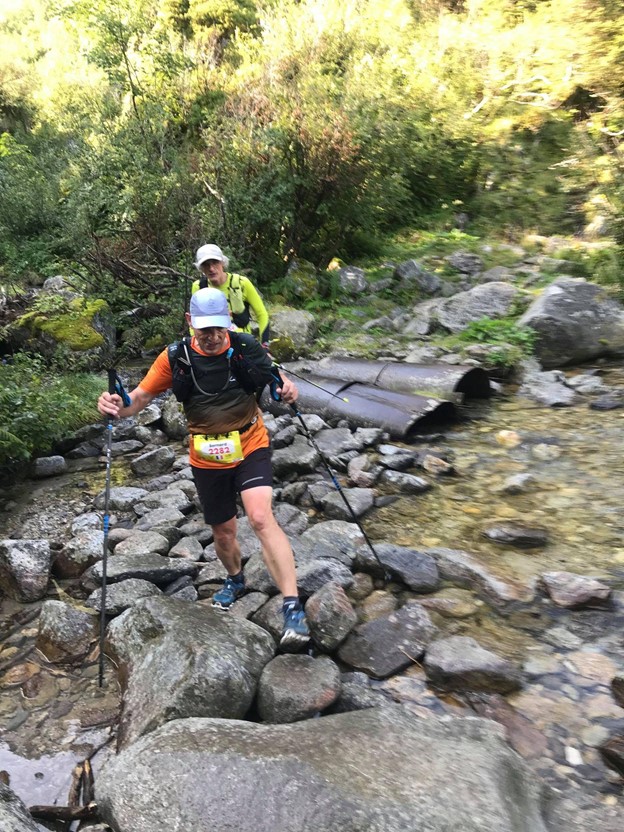 The climb through the trees is intense, and goes on and on. We follow the Breda river, which flows from the Belledonne range towards Isère, towards the 7 Laux (old French for lakes) where we traverse several of the beauty spots. 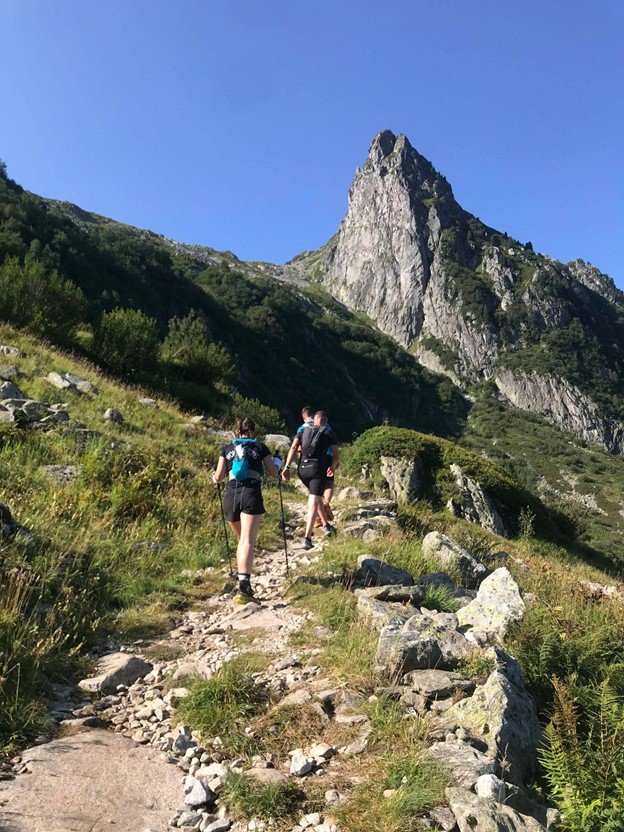 Here the boulder hopping begins and whilst completely absorbed in this, I barely notice I am completely alone. At least I’m not last, I’m sure of that - but I’m not far off. Surely not long ago I was on the heels of a small crowd I was sure I was going to pick off soon, I lament! 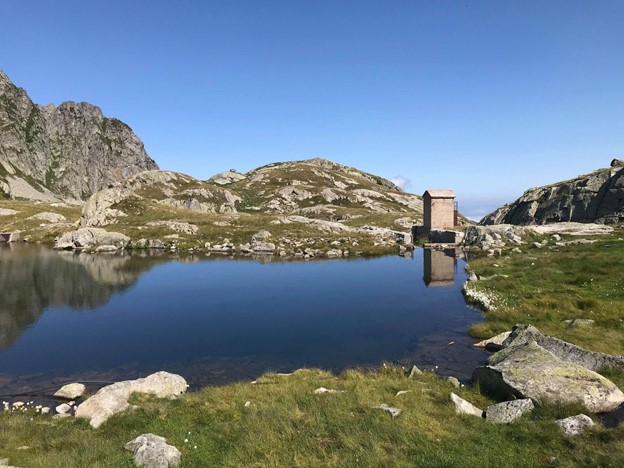 I try to follow the little red flags that have been placed between rocks to guide us along our route, but they are not always easy to spot. From time to time I start to head off in the wrong direction and have to slide back down through the rubble or névé onto the correct line. Unlike many races, we are not following an obvious walkers path, rather the route seems to have been made for us especially for the race. 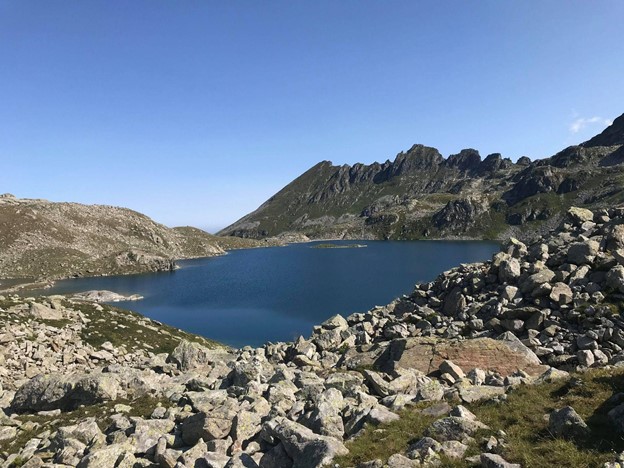 I hop and jump along and the boulders which begin to turn to scree on the Amiante pass, as I begin the ascent to the summit of Rocher Blanc (2928m). Along the way I see some of the flags stuck into the wreckage of a helicopter - an ominous sign, I think! 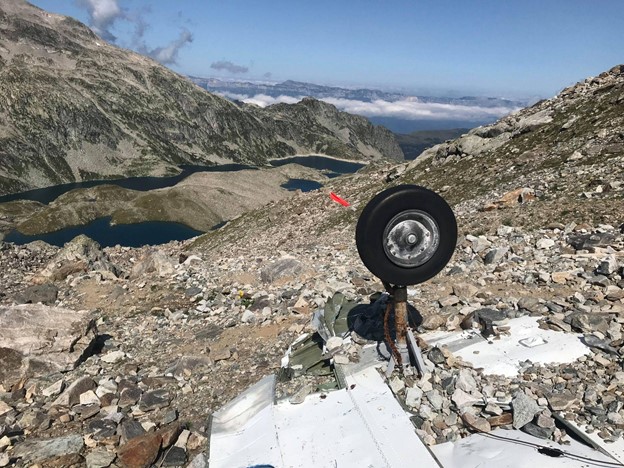 The altitude gain is very rapid and I feel like I have an elastic band wrapped around me that I'm fighting against with every step, trying to move forward. 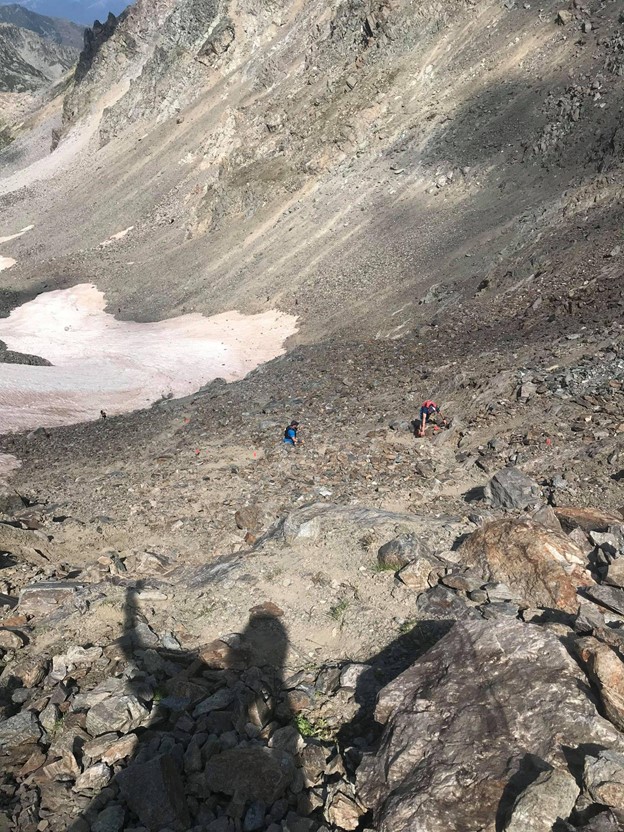 I put away my poles as I need my hands to scramble and eventually reach the top where I’m greeted with some stunning views across the lakes. I stop my clock to take time to absorb them. 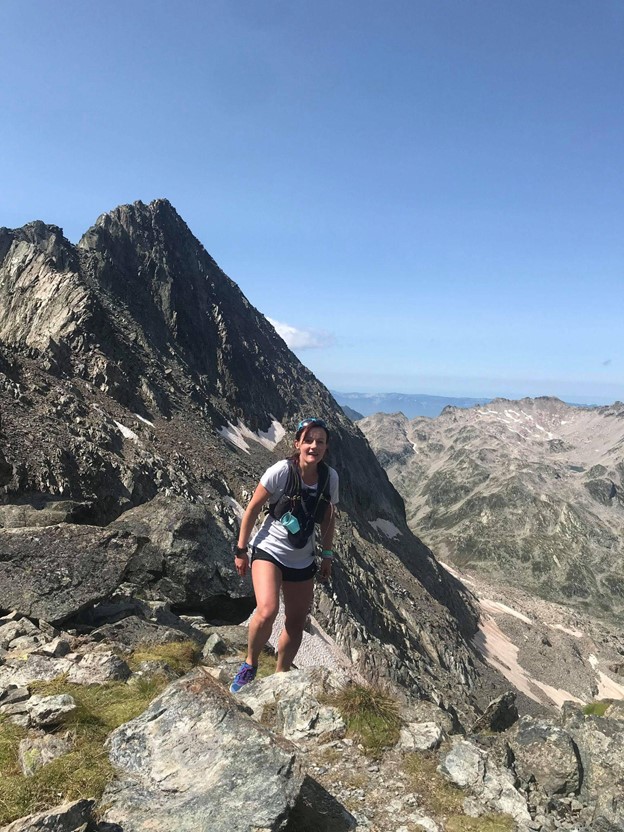 The mountains here really are very wild and remote with no signs of civilization, apart from the race monitor who takes some photos of me and hands me some fizzy water. 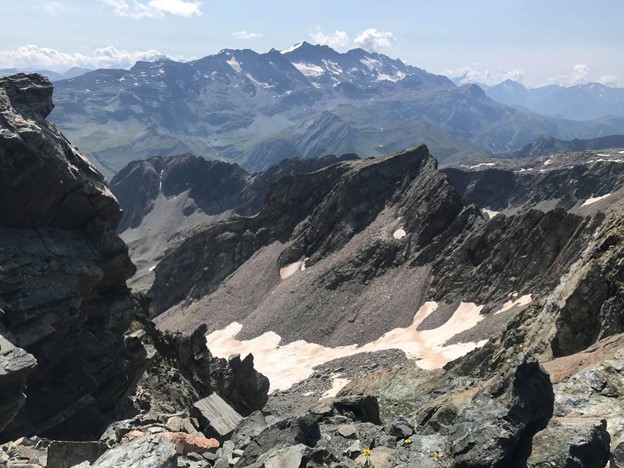 They wish me a ‘bonne descente’ as, relieved,  I begin to head down. I should make up some time here, I think, until I see the ankle breaking rock sharks jutting out below me. I put my poles away again as I’m still going to need my hands to get through this. 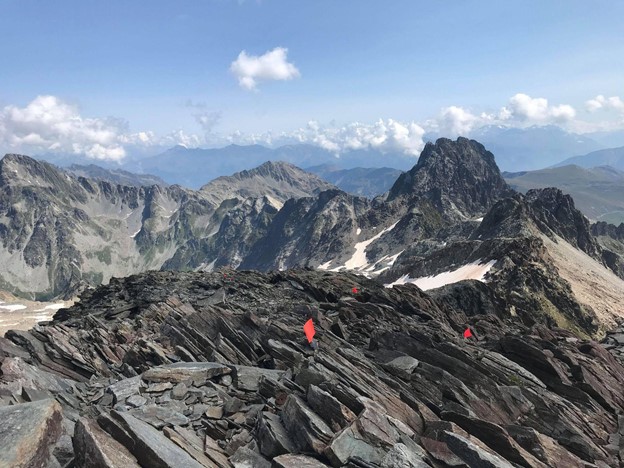 Going as fast as I feel comfortable, I reach a huge névé field, and start ‘ski-less’ cross country skiing through it. Feeling like bambi at first, I eventually give into the fact my feet are soaked, and start to enjoy the sliding a little, until I lose my balance and fall over, ‘burnt’ by the cold snow. I am then overtaken by a girl I thought I'd left for dust earlier. 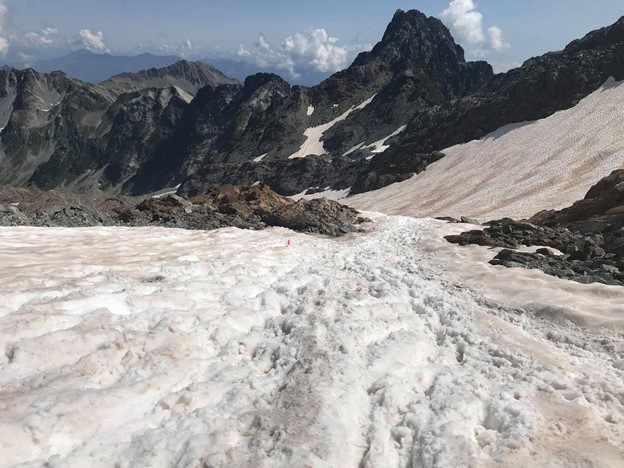 But there is nothing I can do as my balance is so tenuous. However we then hit a long steep rocky descent, the Combe Madame,  which is the nearest this race came to flowing -- although it was too steep to really achieve this. But I could at least pick up a bit of speed, and on the edge of control, I overtake her again. The route then mellows out a little and I traverse the mountain side, do a bit more rock hopping and overtake a few more people, until 17km through the forest again and my ankle gives up on me. The intensity of the downhill was too much for it in its weakened state and I hobble/run to the finish line - also at Fond de France. 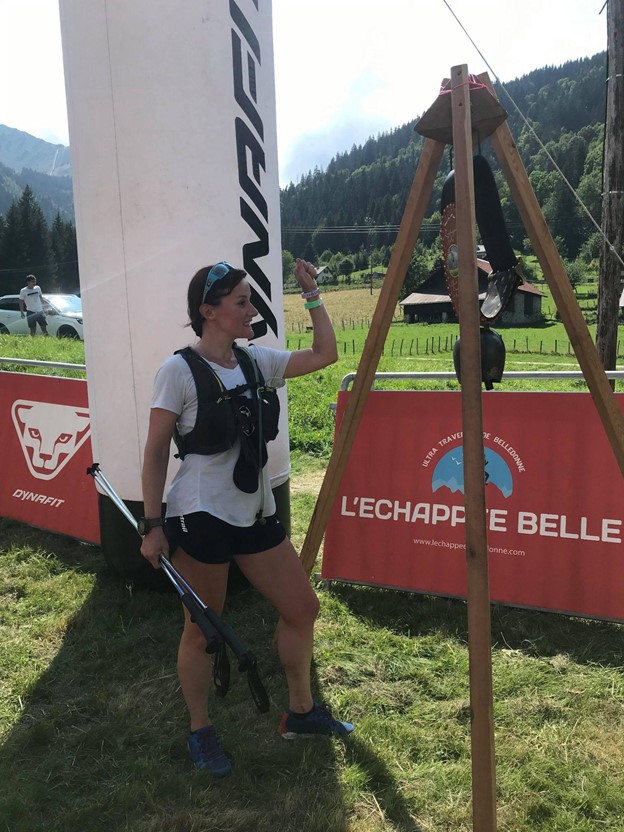 The race took a lot longer than any other 20km I’ve done before - more like my 30km time. However, I felt consoled when I heard that the winning male, Dynafit athlete Lucas Dupuy -- who completed the course in a mind boggling 02:38:00 -- said there was no flat part of it he could actually just ‘run’. It was all up … and then down. Crossing the finishing line I give the giant cowbell a tired ‘dong’ and consider my relationship with the rocks of the Belledone. Definitely a love hate thing...

More in this category: « Wales prepares to welcome ultra runners for world’s toughest mountain race 2021 Montane Dragon's Back Race - Day One sees almost a third of runners drop out »
back to top