The cycle of experience and judgement

The weather looked like it was playing ball so I organised a day out with Alan and Robert, permissions were granted and from then on the isobars were watched with interest to see where the day would take us.

Then Mother Nature changed her mind, all the white stuff that formed in the gullies recently was rescinded as quickly as it was given. So the day out crumbled too.

I am not one to let that stop me from getting out in some shape or form, I started on a new plan. I swapped 2 axes for 2 axles. At the beginning of the year I took ownership of a new Trek Xcaliber 9 29er bike. Around here I’m not the bike guy, I leave that to Stu. I’m the mountain guy so I took my Trek for a trek.

I looked for an easy Munro which was mountain bike friendly, good tracks and not too steep. I found a pair of summits that fitted the bill, Carn na Caim and A'Bhuidheanach Bheag. Forestry Commission tracks pretty much all the way to the summits. 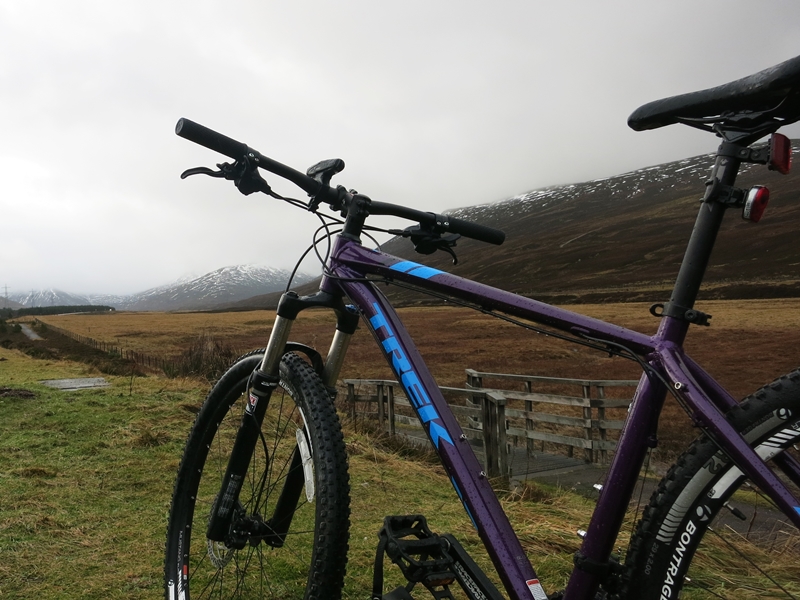 On arrival at the road side I could see that Mother Nature hadn’t been as harsh on the snow as I’d planned for. I’d gone lightweight, trail shoes and minimal waterproof protection. Its winter out there regardless of how it may have depreciated, anyway it didn’t stop me from setting off. I pedalled for a little while before my legs couldn’t deal with the incline anymore so I pushed for a bit, that bit turned into a little longer. Then I got to the intermittent snow patches as wide as the track, the patches turned into snow fields. 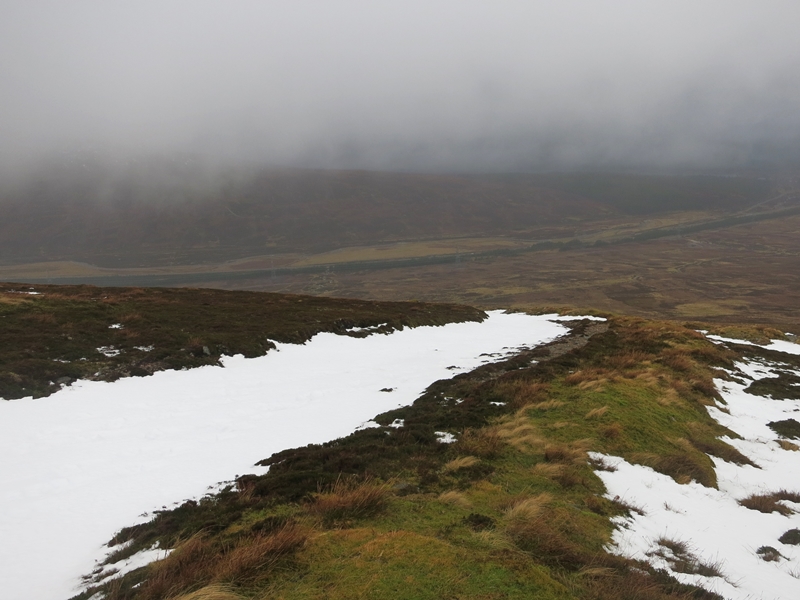 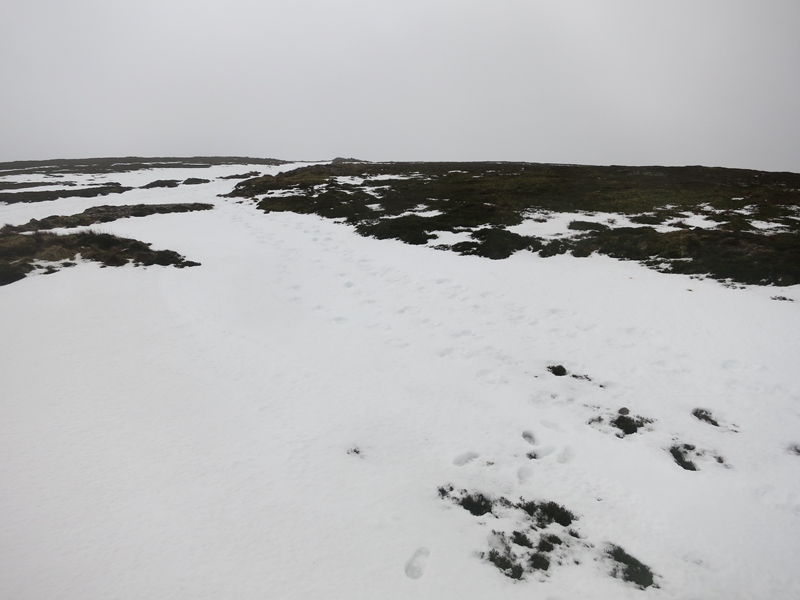 Pushing became tiresome but I had seen online mountain bikers carrying their bikes with the downtube of the frame across their shoulders. The next issue was traction, my old Merrell trail shoes had very little tread left but I had packed my Yaktrax. They gave me enough grip to push on with the bike on my back. Carrying stuff up a mountain is what I’m used to. 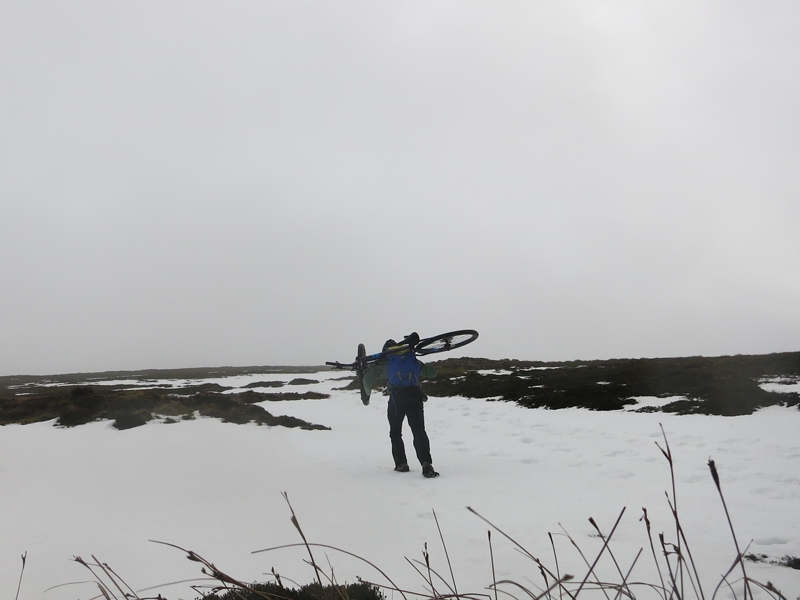 As I got higher the snow coverage became widespread, the quality was rubbish though. Slushy, deep in places, icy in others. It was too inconsistent to ride on when it started to get flatter in what is described as a bealach, more an unfeatured dip between the summits than a mountain pass. I tried though and ended up lying on my side with the bike on top of me. The snow was too crap to have the weight of the bike added to mine so I went back to pushing.

As I trampled through the rubbish ground conditions there were obvious tracks in front of me, when the wind blew stronger than normal and cloud cleared for a second I saw the group in front. I was starting to gain on them. I then became concerned what that group would think of someone who looked to be underprepared? If it was me, what would I think of me stood in the kit I looked down at? I’ve been on the other side of that conversation. 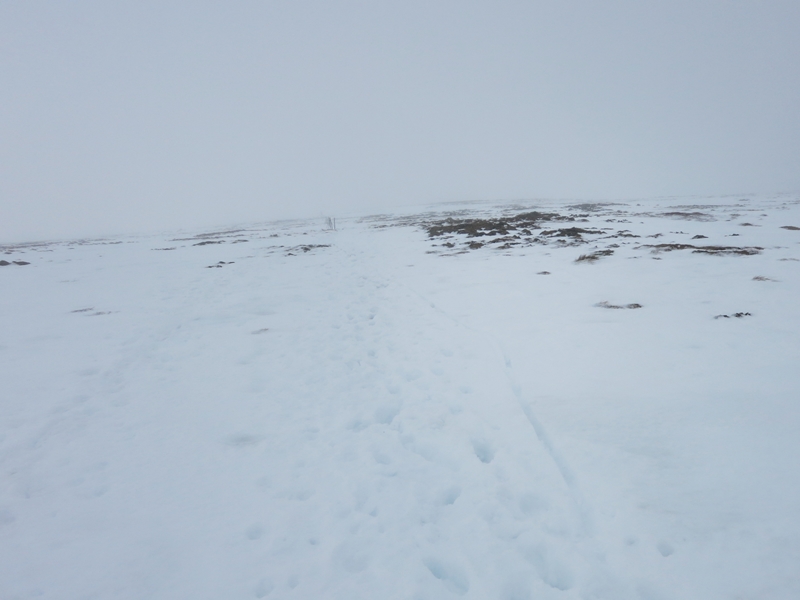 I saw the group stop at the summit cairn, I could see there were four of them as I approached. My experience in the weather battered hills of Scotland gives me, in my opinion, the right to be where I was at that point. So I roll the bike up to the cairn lie it down and in amongst the strong gusts blowing across the unfeatured peak I turn to the nearest member of the party and say “Windy up here, eh?”

The group were well kitted out, they may have looked me up and down or maybe they thought my bike was cool, I know I did. I threw on another layer and ate something. I was wet, feet particularly, but I had been colder before and I didn’t feel hindered by the temperature. And the group didn’t seem as ‘chipper’ as I would have been encompassed in their winter gear. 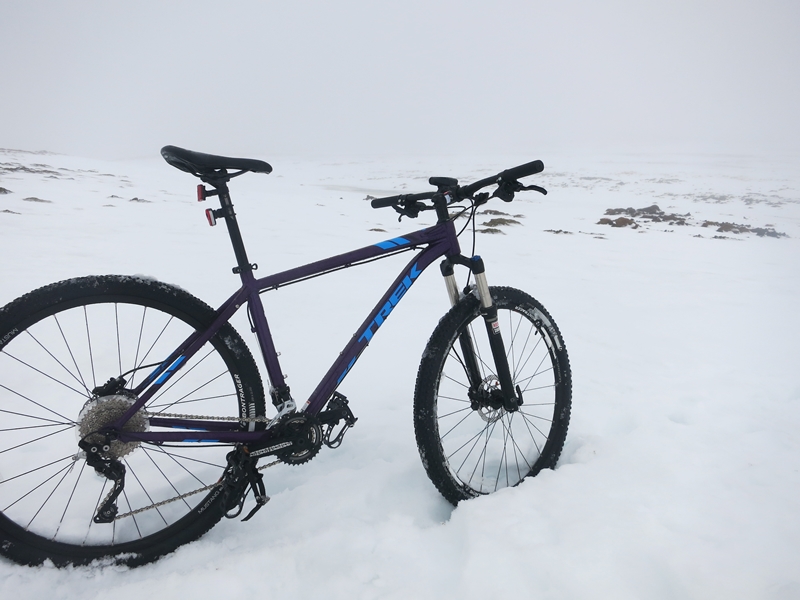 As they set off I realised that experience is what sets the bar. I’ve been out in all conditions in winter in different areas of Scotland. I’m not saying I know it all and there are guys out there who know and have experienced more. However my discomfort in what they think of me disappears, as I turn and head back to the T junction at the top of the track, I end up passing the group, using my wheels the same way they use their poles. At the pass I stop and have another go at my sandwiches, I see no need to go for the second summit so I decide to head back. 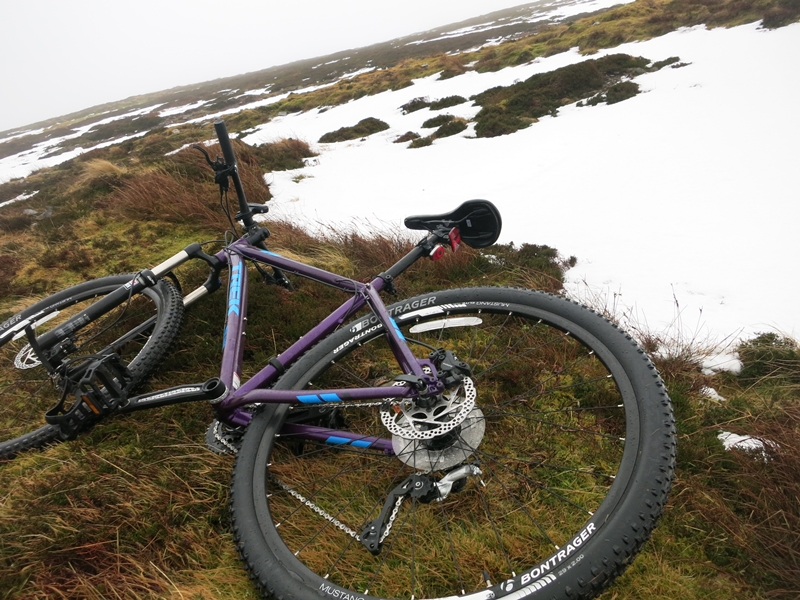 While I descend waiting to find the point to which I will roll down the hill I run through in my head all that has happened this afternoon. There is a saying that “Good Judgement comes from Experience, Experience comes from Bad Judgement!” In the end it’s all about experience.

This one taught me a couple. I need to improve my mountain biking, the Commonwealth Games 2014 Mountain Bike track being 15 minutes’ drive from my house should help with that. That and I need to strengthen my cycle legs, I had some cramp which I wouldn’t normally get from walking up that mountain. More time on the mountain and cycling on hills will need to be planned.

In terms of gear, the first thing that I’ll be looking for is better trail shoes. The shoes I wore had no grip left as they were old, also they leaked like a sieve as they were more broken than broken in. I was also thinking about waterproof socks, these would work in different scenarios too. The pack I was using ended up taking most of the strain of carrying the bike when it was across my shoulders, I’m going to keep an eye out for something that may improve the pack mule facility. That then led my thoughts to bikepacking and the kit involved in that, maybe Stu and I can get out for a weekend and he can show me the ways of the bike. There may be other things to help improve the experience but I haven’t thought of them yet.

The last stretch back to the car made lumping the bike up and down the hill worth it. I found a route most of the way down that allowed the wheels to turn and not be caught up in white quick sand. The getting down is normally the pain, this time I rumbled to the bottom with minimal effort and a lot more enjoyment. 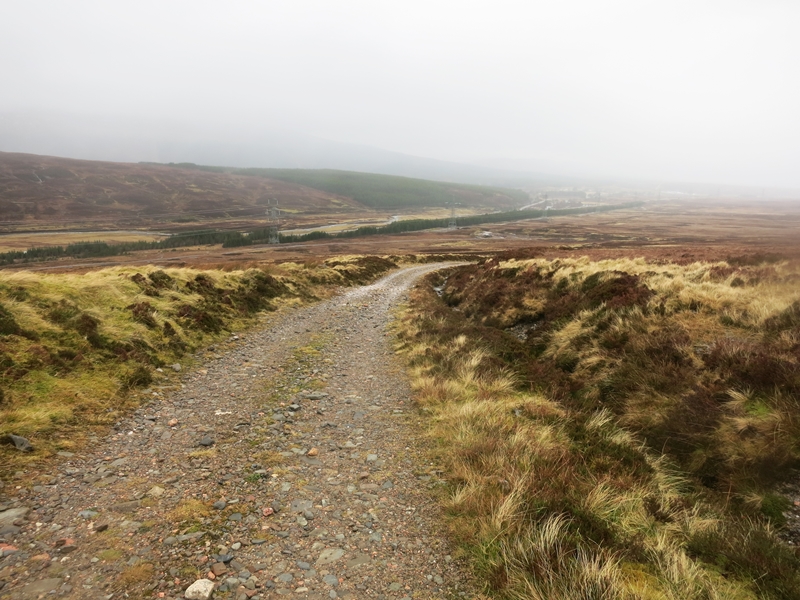 So the in the end the day went well, I learnt a bit more, I had fun and realised it’s all about the experience.

More in this category: « Let your dog share the load in the hills A Winter Week in the Alps »
back to top