There may be an odd summer storm, but that doesn't stop the colourful cocktails flowing and toes being dug into the white sandy beach as people relax to the tropical island Reggae.

Surrounding me, however, is not a blue horizon stretching as far as the eye can see, but some of the Alps’ highest peaks and a glistening lake.

Set on a wooded, south-facing plateau above the Rhône valley at 1500 metres, the Swiss alpine town of Crans-Montana is an extraordinary location; and here water provides some of the adrenaline thrills in the summer that the snowy peals offer in winter.

I plop into the – I am assured – 20 Degrees Celcius waters at the Etang Long lake and am soon I am skimming across the lake on a wakeboard, trying to keep my speed up so I can propel myself around the buoys at the ends of the new 120-meter line. 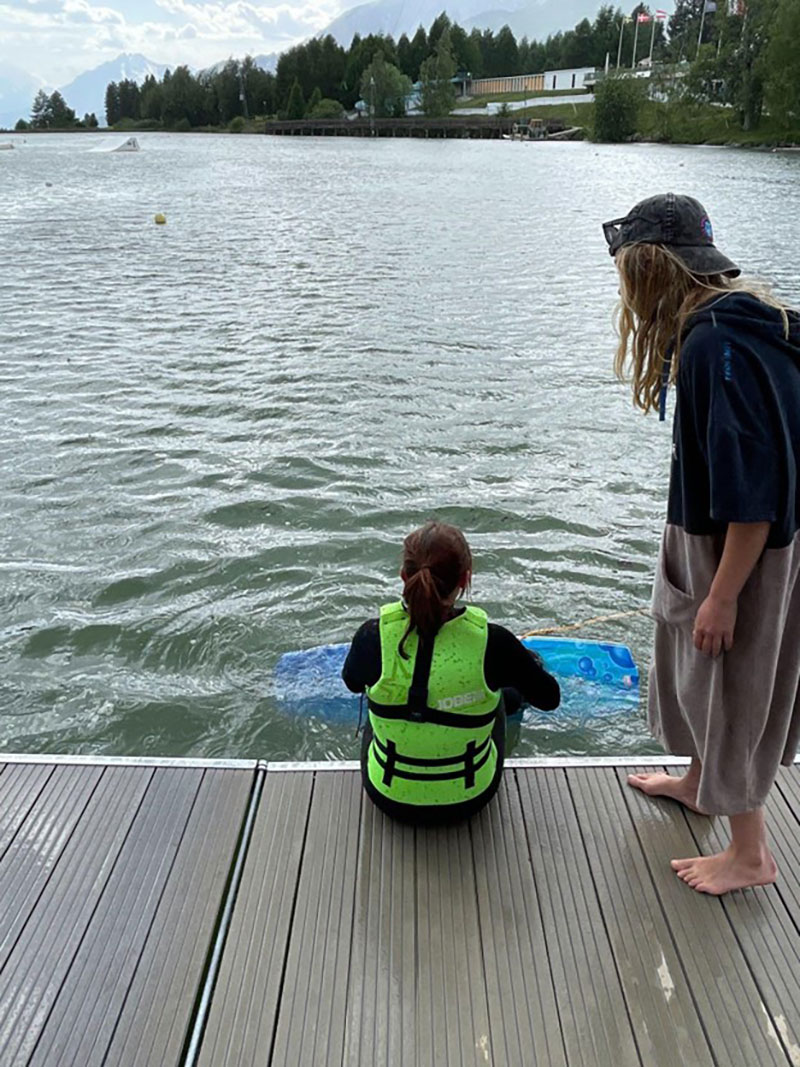 Wakeboarding here is far easier for me than on a river being pulled by a boat; standing up isn’t a problem and there is now wake caused by the boat so I’m managing to carve a bit too. 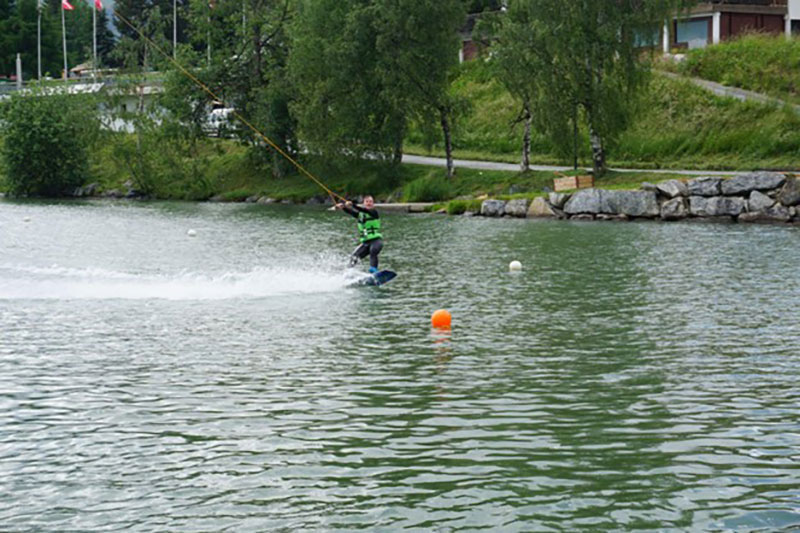 The Beach Club of Etang Long lake offers a spectacle of wakeboarding, water skiing monoskiing, wakeskating and even wake surfing. Next to me, experts are slaloming on mono-skis or landing flips on their wake in the ‘pro’ 170m line. The water sport is so popular here there is a festival in August. 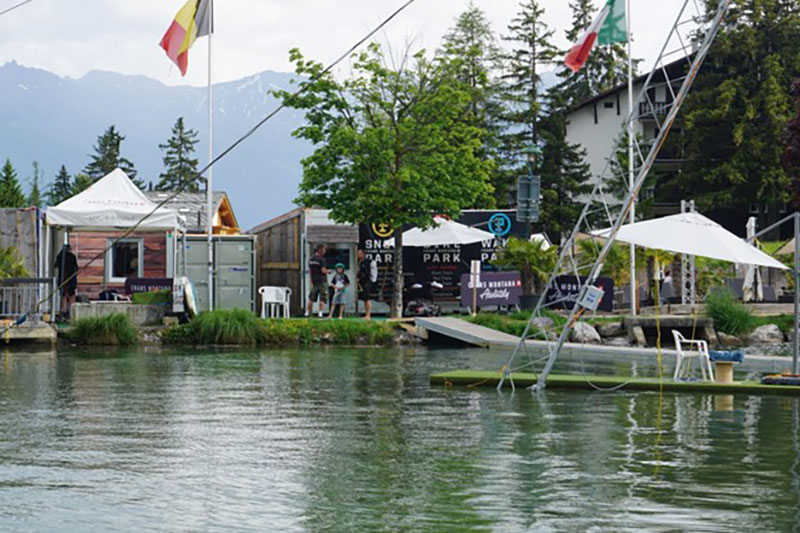 From swamps to sanitoriums

The resort of Crans Montana owes its existence to its lakes. There are five main swimming ones located in the heart of the resort (Etang-Long, Etang Grenon, Icogne, Chermignon and Moubra ) and a ten-kilometre-long walk around them is possible.

Crans Montana was born when two friends from the valley, Louis Antille and Michel Zufferey, fell in love with the plateau during a hunting trip.

“They saw the nice water and the view and there was nothing else here so it was a perfect place for a hotel,” says Pierre-Henri Mainetti, the Sales and Market Manager for the Crans Montana tourist office.

“The area is flat as it was created when two glaciers collapsed,” explains Pierre “and thanks to its high plateau, Crans-Montana offers many lakes and ponds.”

The lakes used to be swamps, but “they were sort of damned up to keep the water.”

The friends built Le Parc hotel in 1893, overlooking Etang Grenon. The air quality and sunshine (Crans Montana has more than 2100 hours of sunshine a year, and enjoys a Mediterranean-like climate) then gave rise to sanatoriums for people suffering from tuberculosis from 1896 onwards.

Now surrounding Etang Grenon is a youth hostel which was once the sanatorium and hotel “Bella Lui” meaning “beautiful light’ in the old Valais dialect and the brewery “La Marmotte” based at Hotel du Lac. Here you can learn how the beers are brewed and taste some of the ten varieties on offer. 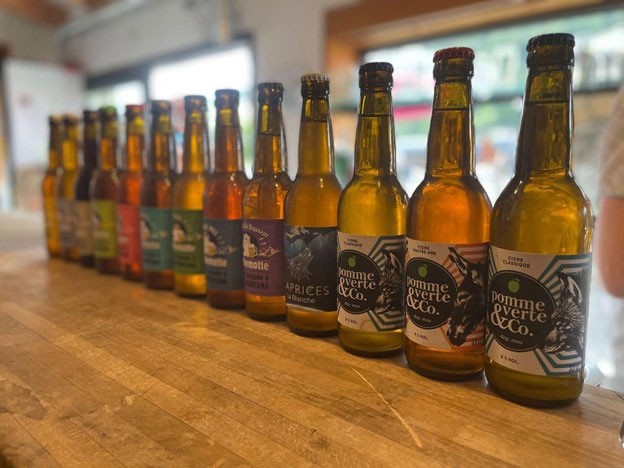 Before the hotels, Crans Montana consisted of several small villages, pastures and small alpine chalets called ‘Mayens,’ a typical Valais building where mountain farmers stayed when they brought their flocks to spend the summer on the mountain pastures.

To water these arid pastures, waterways were built to channel water from mountain streams. Known as bisses - they were often built along daring routes and now accompany numerous walking trails. 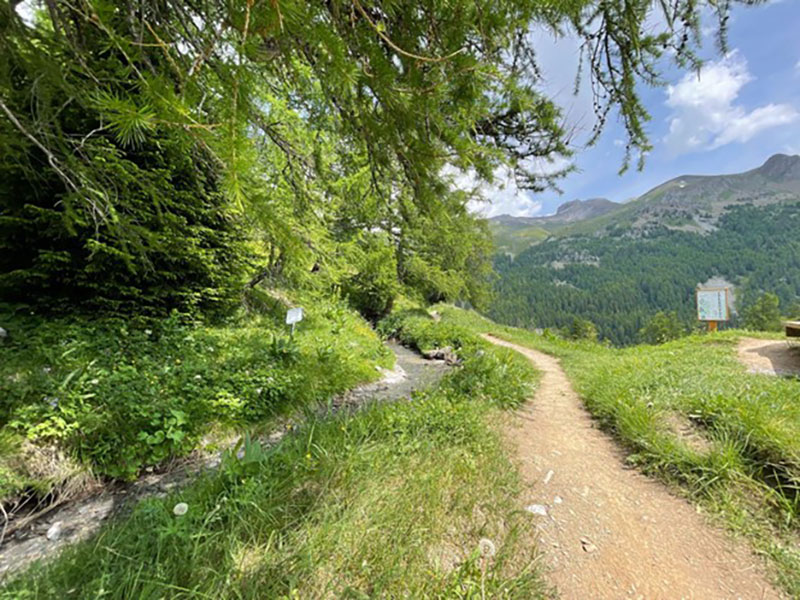 Located along the Tsittoret bisse at 1850 metres is Colombire. The Hameau contains three perfectly reconstructed mayens, which form an ‘eco museum’. Inside are the furniture and implements used by the ancestors of those from this part of Valais. 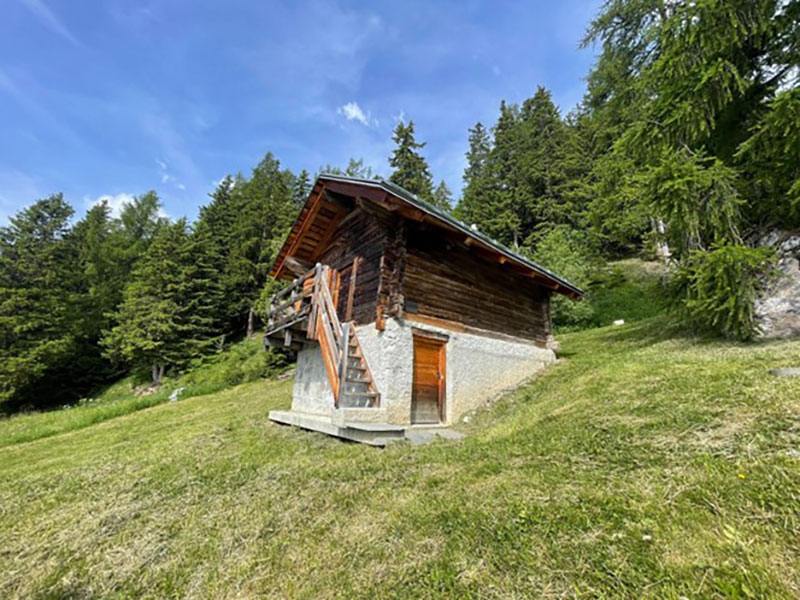 Colombire is the perfect location to learn how to make traditional swiss cheese, which was a way of making use of excess milk, explains walking guide Etienne Jaccottet.

“The cheese was always made in the morning,” says Etienne. “It's fresh so it doesn’t taste like milk in bottles, and there is more fat and more taste as it's not pasteurized.” 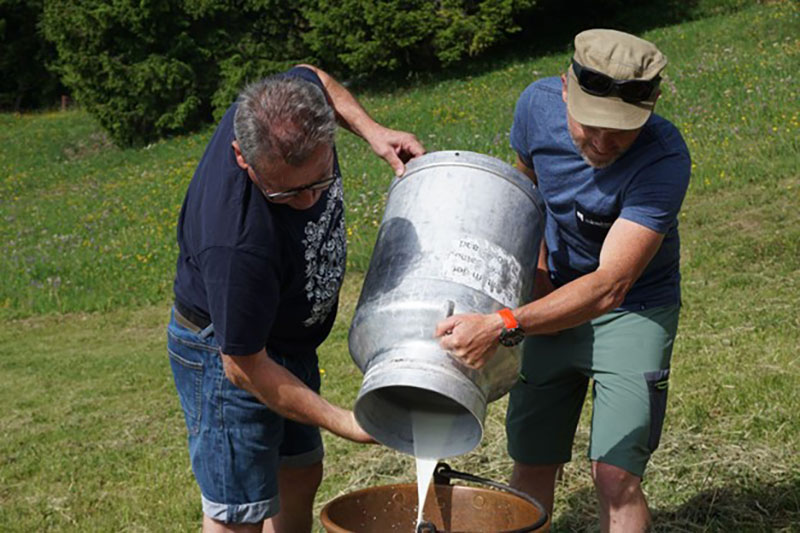 We start by gently warming 20 litres of fresh milk from the nearby black cows, which should make 2kg of cheese.

“The black cows are smaller and have more muscles, but give 25 per cent less milk –  the taste of the milk comes from the flowers the cows eat.”

The milk is poured into a metal pot where it is warmed to 35-36 degrees and stirred using a large traditional whisk-like tool. 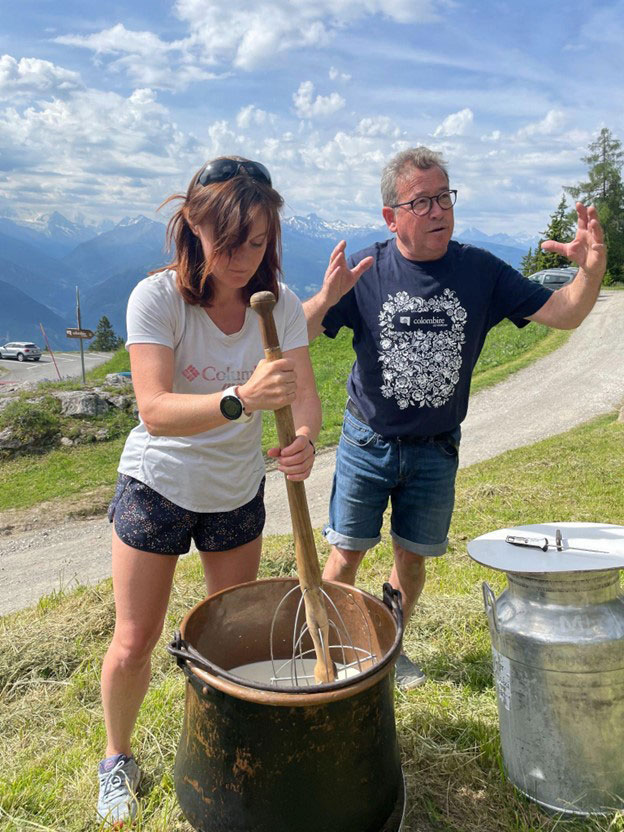 A drop of rennet is then added which causes the milk to separate into curds and whey.

After about 30 minutes the milk forms a yoghurt-like consistency and is stirred again using another razor-like tool which slices it up.

If the slices are bigger they will have more water in them - which gives a Raclette or Tomme cheese, explains Etienne. Gruyere needs less water inside and is cut into smaller pieces.

The whey - or  “little milk” liquid that is left behind can then be reheated to 90 degrees to make Swiss serac cheese, ( similar to cottage cheese). Nowadays its also used to make the popular Swiss soft drink, Rivella.

The fresh cheese is then poured into a mould with holes in it and weight is dropped on top to squeeze out more water.

The wheel of fresh cheese is then removed from the mould and is ready to store. As we are making Tomme it will be ready in six weeks. A raclette would need about two months and a Gruyère, is stored in a cellar for between five to 18 months to mature. 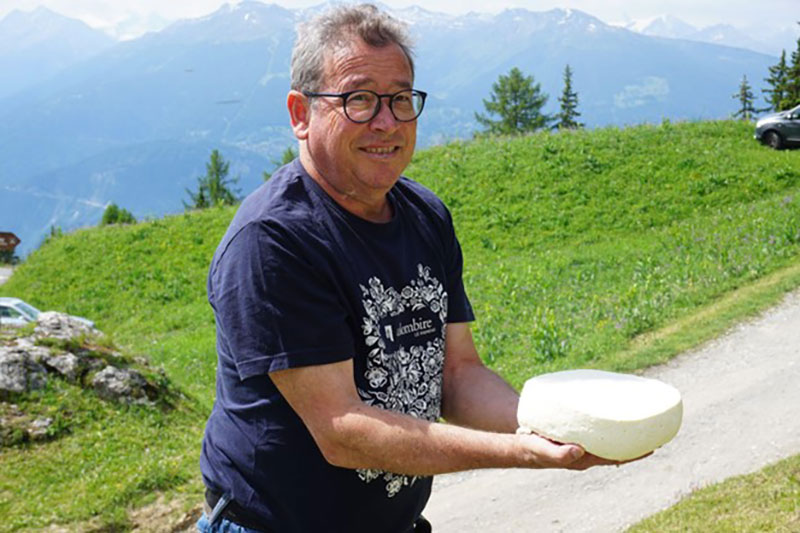 After all this swiss cheese, it's time for a walk along the Tsittoret bisse. Along the way, Etienne tells us about the local wolves (they don't attack humans) and the fighting of the local Heren cows to determine who will be the Queen of the herd. 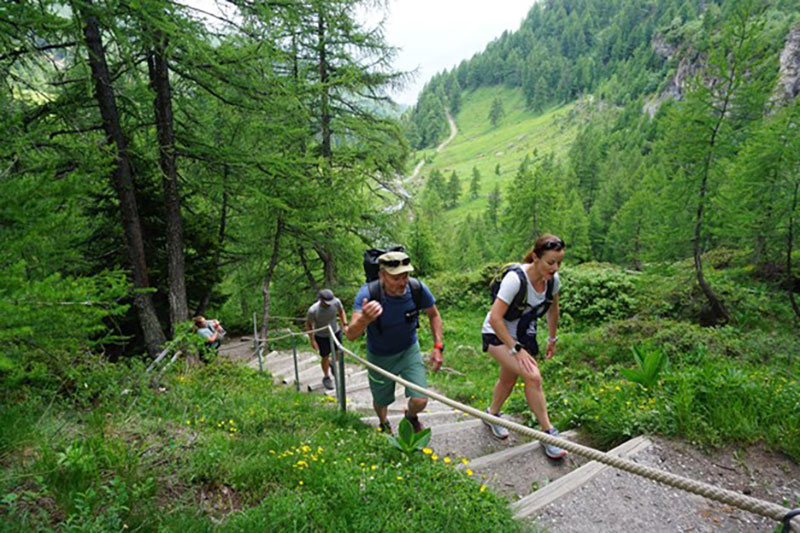 We stop for a picnic of Tomme cheese and local Cornalin wine. Etienne says Cornalin in French meant Pagan suggesting that the wine here existed since ancient times.

The walk is gently rambling as it passes by several waterfalls. As La Tièche river widens the path steepens. I am beginning to wonder if the climb is worth it when we turn a corner and reach a thundering waterfall that feeds the river and the bisse. 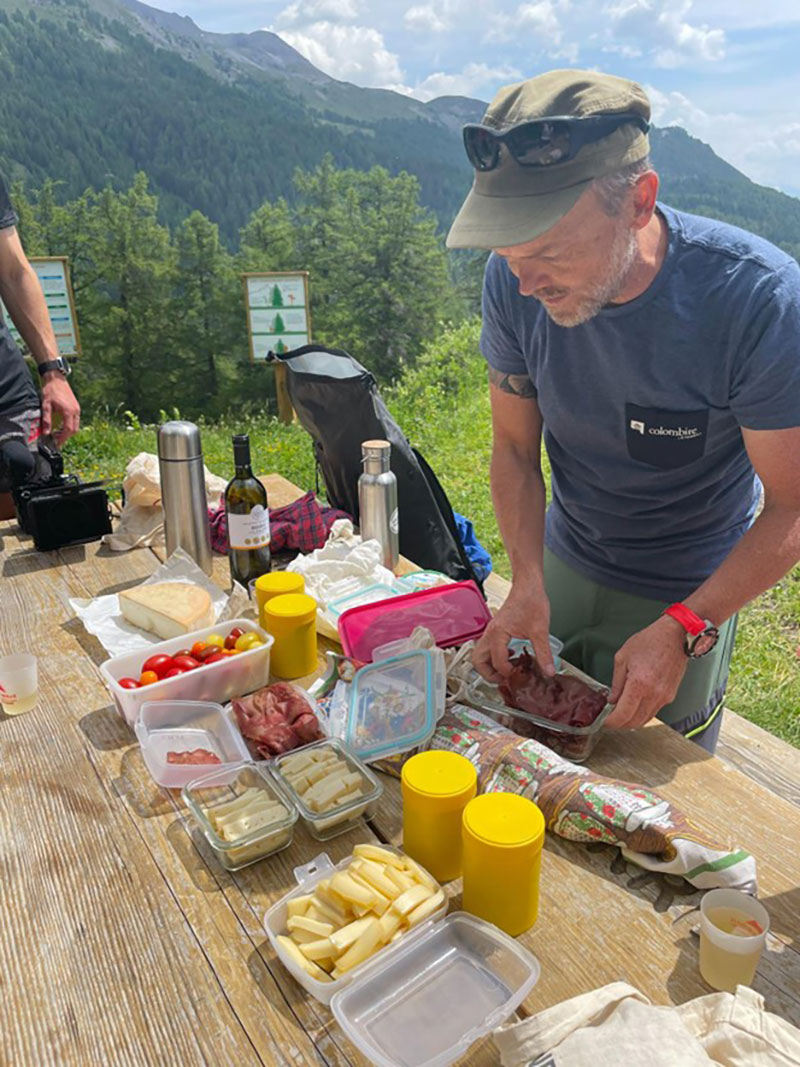 The river can also be reached using different trails via mountain bike. We made an epic journey around Crans Montana’s five lakes to the river much easier using e-bikes, allowing us to cover much more distance as well as tackle the challenging runs of the bike park to get back into town, with guide Julien Paganelli giving me tips along the way. 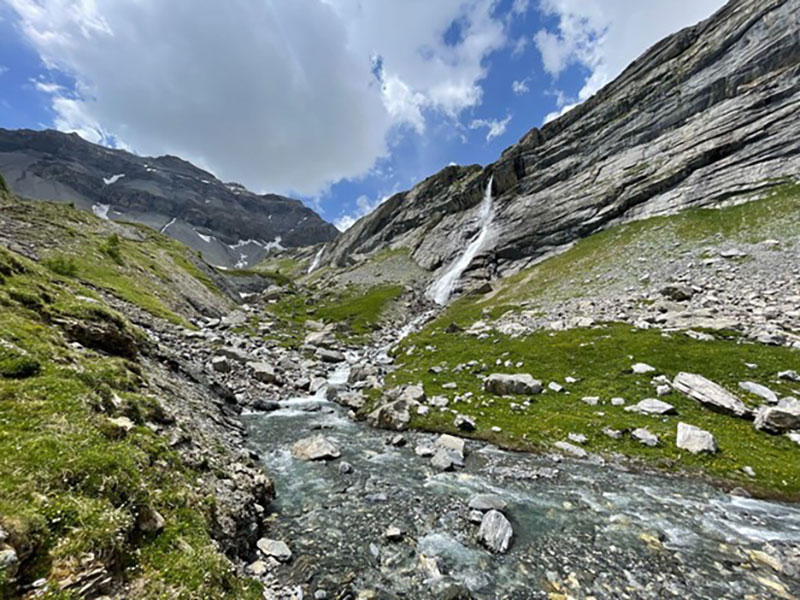 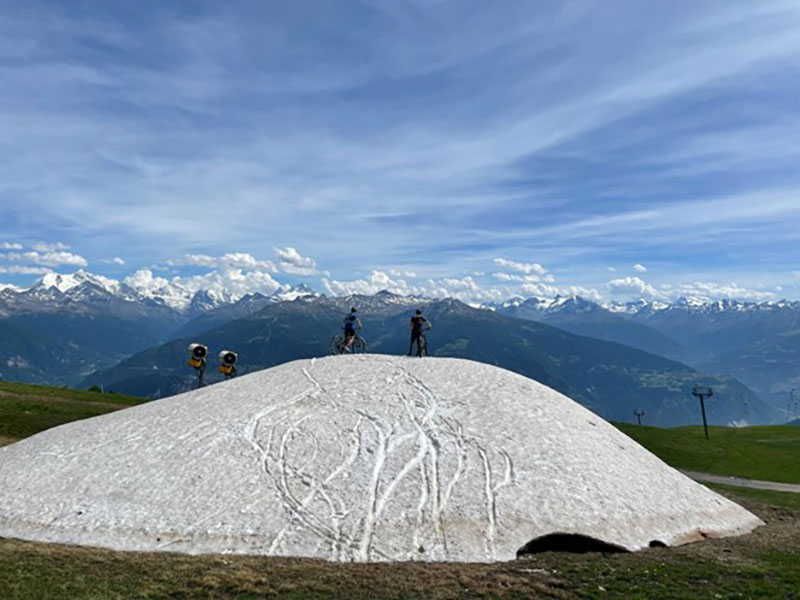 Apart from the traditional bisses, a most unexpected water-based attraction can be found in the area.

In 2015 Adam Bonvin was surfing in Hossegor when he lamented the lack of surf in Switzerland.

So in 2019 they opened Alaïa Chalet in Crans Montana, Switzerland’s biggest action sports centre where you can train for skateboarding, freestyle skiing, snowboarding and BMX.

This was followed by Alaia bay surf park in May 2021 in nearby Sion.

Bringing watersports into an alpine setting certainly seems to be the way to make a wave in the mountains. 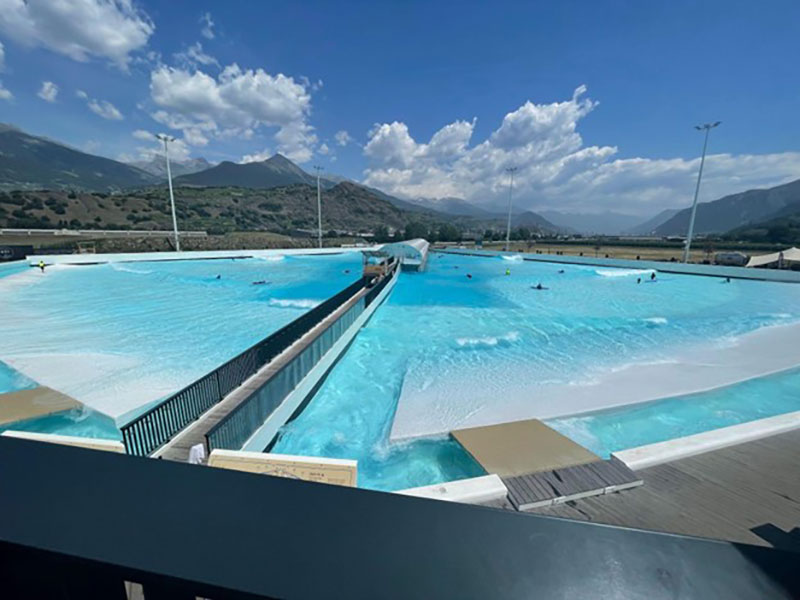 More in this category: « 10 Steps to becoming a more responsible traveller A guide to Norway in the summer, as told by experts »
back to top