In the heart of the Lake District there is a town that holds the biggest outdoor event in the UK: Kendal Mountain Festival. Whether you are an outdoor athlete, adventurer, brand or weekend warrior you are welcome and included at the festival. 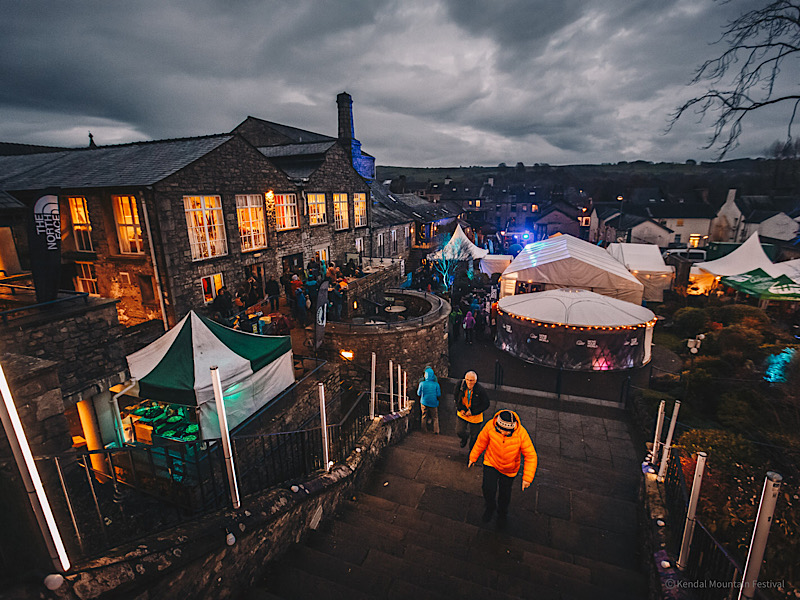 This years theme was “openness” and I couldn’t think of a better word to describe how this festival feels to me. The festival press pack defines the theme as “freedom and creativity”, however I think it can be open to interpretation. Walk up the street or through the basecamp tent and you will see outdoor personalities, like Sir Chris Bonington, Matt Helliker and many more that will quite happily stand and chat to you. That’s how inclusive and open the festival is.

My normal festival is a bit of networking, chatting about the outdoors and quite a lot of “refreshments”! This year was much of the same however as there was a smaller team from MyOutdoors I took it upon myself to fly the flag. 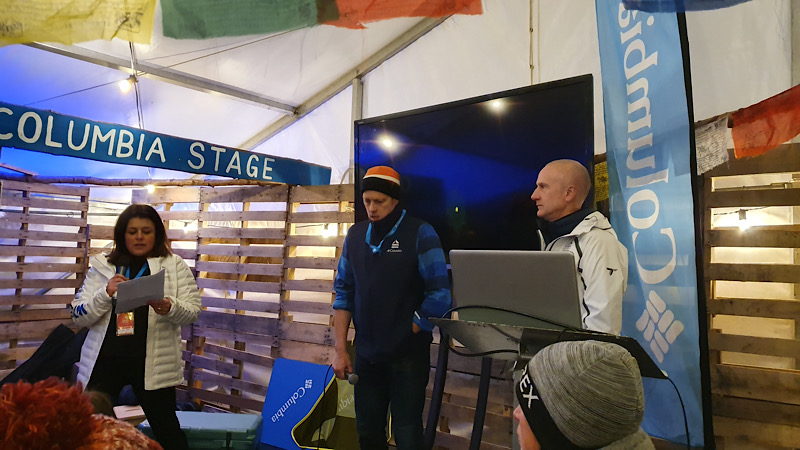 I headed down for the opening ceremony on the Thursday, I followed the procession up the High St to basecamp and watched as the festival directors opened the event. KMF has included a number of the bars this year as screening locations so it has stated to spread out a bit along the Main Street instead of being focussed on the Brewery Arts centre and the associated bar. So I sampled some of the new locations like the Ye Old Fleece Inn and the Shakespeare Inn, it would of been rude not to. 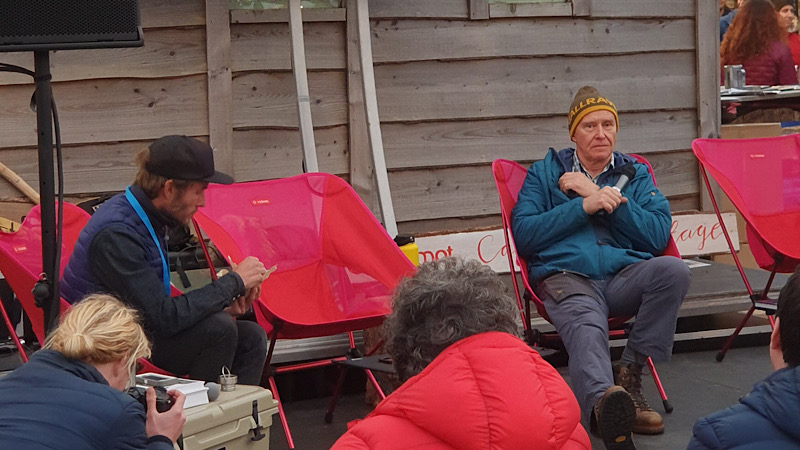 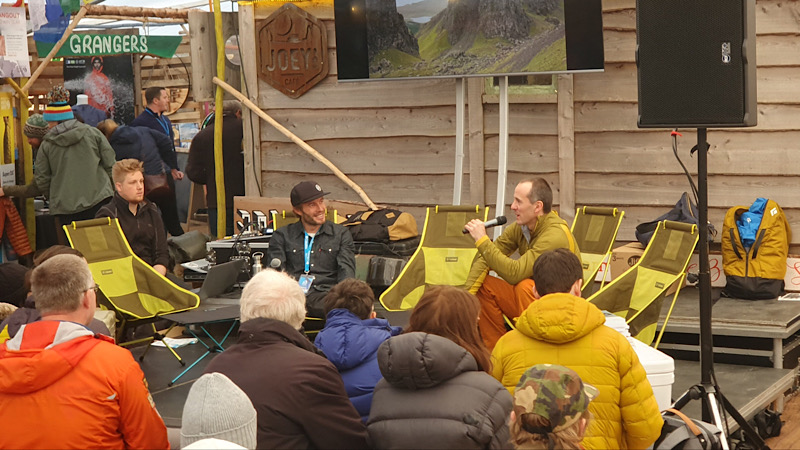 Friday was a day for catching up with folk whilst it was “quiet”, it was anything but. The basecamp tent felt pretty busy, and it’s not surprising with the draw of all the free talks. The programme is always great , in all honesty you could spend the weekend in there and hear about more adventure than any one person can handle. I listened to Dave MacLeod, Alan Hinkes and on Saturday listened to Leo Holding speak to Sir Chris Bonington from his expedition in South America. The main thing for me that was missing was the usual host of basecamp, Liam Lonsdale. There were a mixture of presenters, some in my opinion not quite to the same standard. 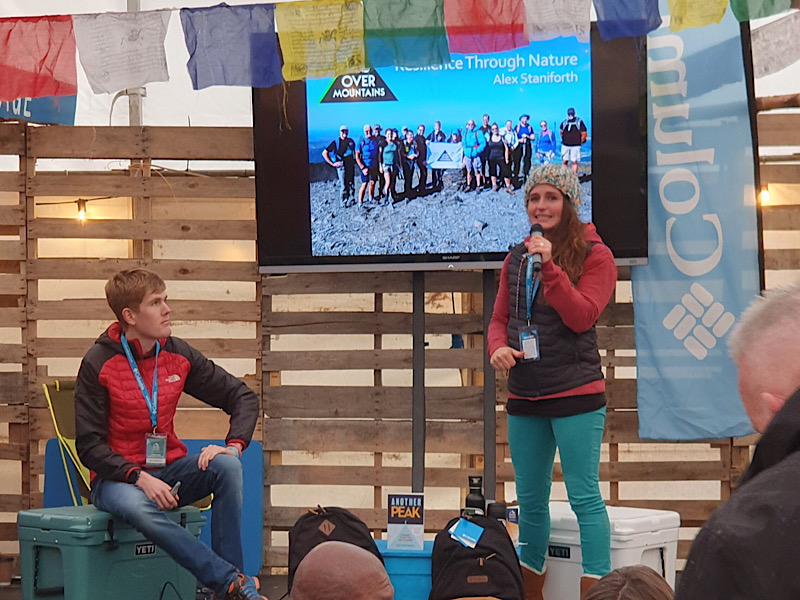 On top of that there is another free stage presented by Columbia with equally as much content, here I saw Alex Staniforth talk about his Mountains of the Mind project. Like I say more than enough free stuff going on without paying for one film! 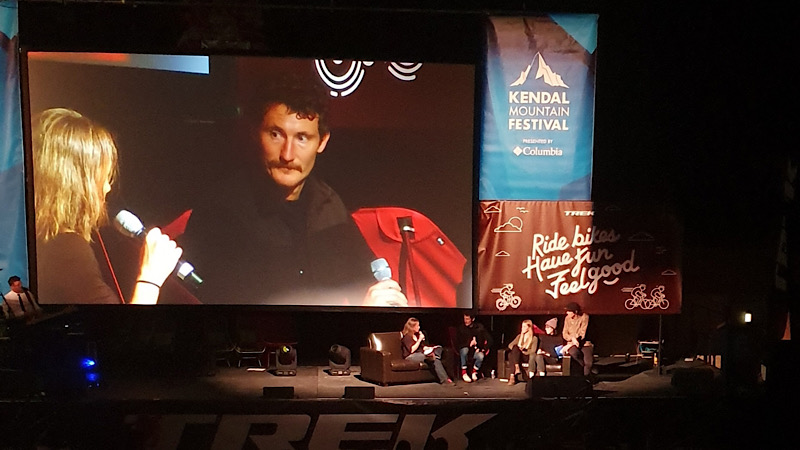 The offering for the films and talks this year was immense! I didn’t get to see everything I wanted to, mainly due to the fact if I did I’d never see the light of day (or night). Friday evening I went to Bike Night, held at the Leisure Centre which is most remote but biggest venue of the festival. It is known to be the most raucous event. My first time there however, it wasn’t as crazy as I expected. This may be due to some drunken antics from last year I was told about. The format of the night is a mixture of films and chat about mountain biking in all forms. I was especially interested in the interview with Dom Ferris from Trash Free Trails. A great night with a mixture of content for bike lovers. 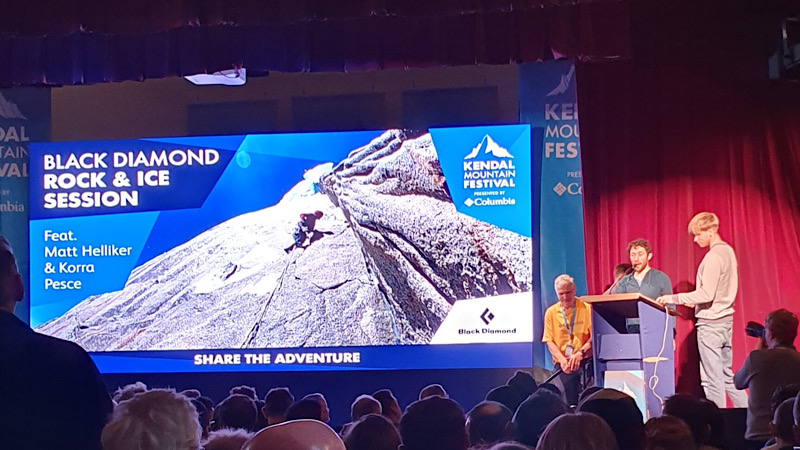 Saturday morning started early with the Black Diamond Rock & Ice Session, with Matt Helliker & Korda Pesce. Great stories of Patagonia ascents from Korda and Matt’s exploits in the Alps and Scotland. I think he was making a point about the early ascents in Scotland this season by laying out some of the ethics of Scottish Winter climbing. Always a great session, but a little early in the day after Friday night socialising. 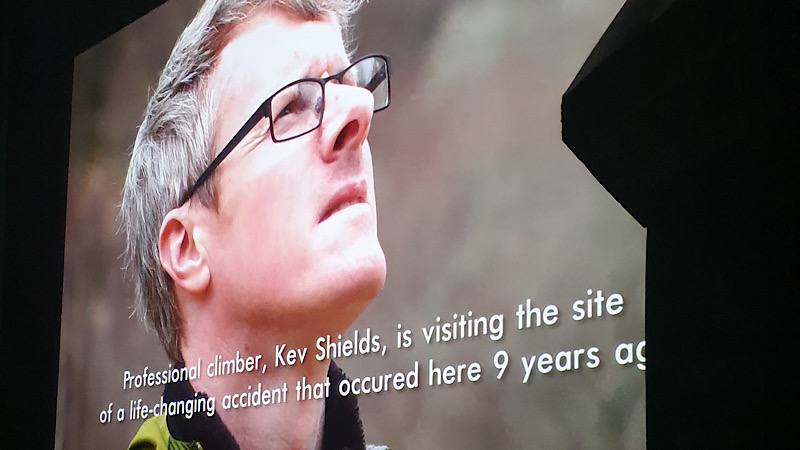 The next session was the Climbing films, a brilliant mixture of films. From Deep Water Soloing with Tim Emmett, battling injury with Kev Shields to the first UK female 9a by Emma Twyford. There were a couple of other shorter films which complimented them, all in all a brilliant collection of films.

The afternoon on Saturday was for catching up with friends and making new ones. Initially I stuck my head in to Basecamp tent again and it was jam packed, it needed a one way system. If you tried to go against the current you might as well be back stroking in a tsunami. It was good to see how popular the festival has become, all the people coming to check out what the festival has to offer. It was just a little busy for me that afternoon, so I did what any normal person would do, heading for the bar!

I spent most of the afternoon networking! Hopefully some of that will help bring content to MyOutdoors in the future but mainly it was good to catch up and hear the stories of the past year up close instead of on a social media stream. 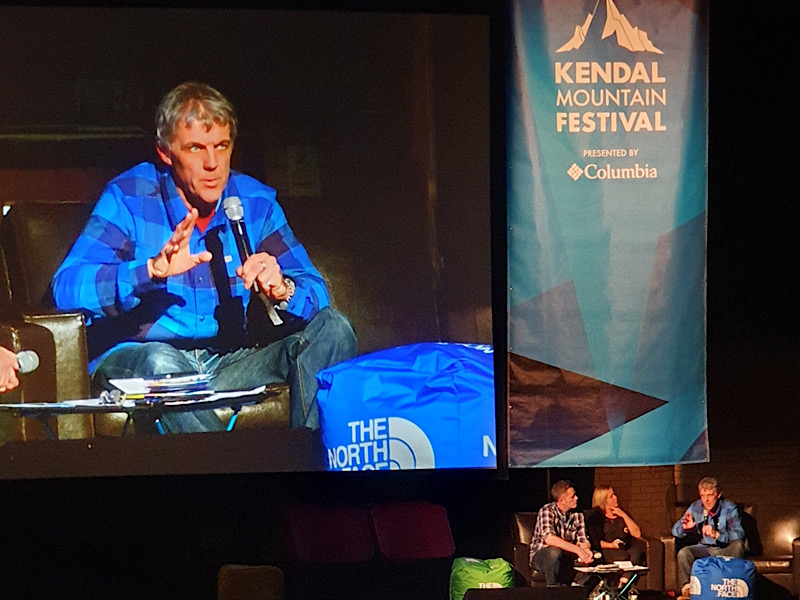 After a relaxing afternoon it was time to make my way back to the Leisure Centre for Snow Night! The night was hosted by one of the directors Steve Scott, and Jenny Jones, Olympic medal winning snowboarder. The structure of the night was the same as Bike night, a mixture of guests, including MyOutdoors very own Henry Iddon, (he’s also part of team who brings the Literature side of the festival) and films. It was jam packed and due to the amount of content over ran by nearly an hour. I really enjoyed it, especially as I am looking to get back on the planks this season, it gave me that inspiration that everyone refers to whilst Kendal Mountain Festival. 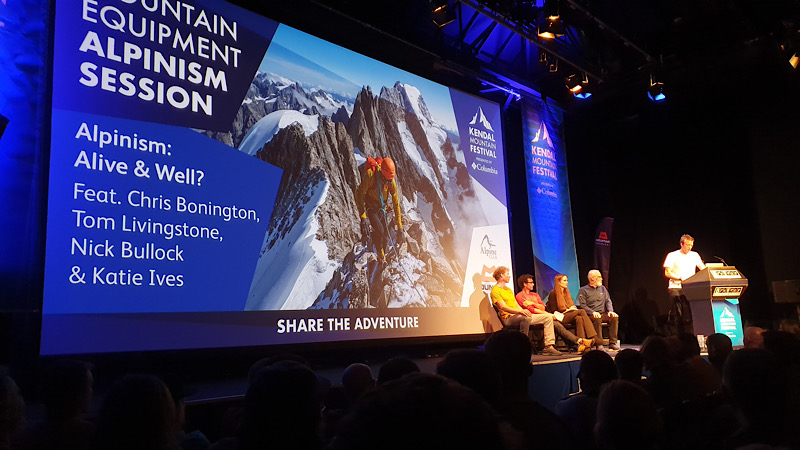 Sunday morning was a slow start and thankfully the only show for me was the Mountain Equipment Alpinism Session which started closer to lunchtime. The panel was made up of some well known faces in the Alpinism community. The question posed was “Is Alpinism alive and well?” The atmosphere felt a bit tense, if I’m honest. All the panel got the chance to put their opinions forward, topics raised were the effect of social media and brand sponsorship on the athletes goals, environmental impacts on darting around the globe and how the risks take the lives of so many Alpinists. I’m not sure there was an answer but I do think some athletes are considering their carbon footprint and it was good to here that there are brands that aren’t pushing their athletes to be fool hardy.

During the festival I caught up with a couple of outdoor folks and did a Three Question interview. Below you can see the interview with Tim Emmett, Jesse Dufton, Jenny Tough, Alan Hinkes and Dave MacLeod.

There is an extended interview with Tim Emmett and Jesse Dufton on the MyOutdoors YouTube channel. 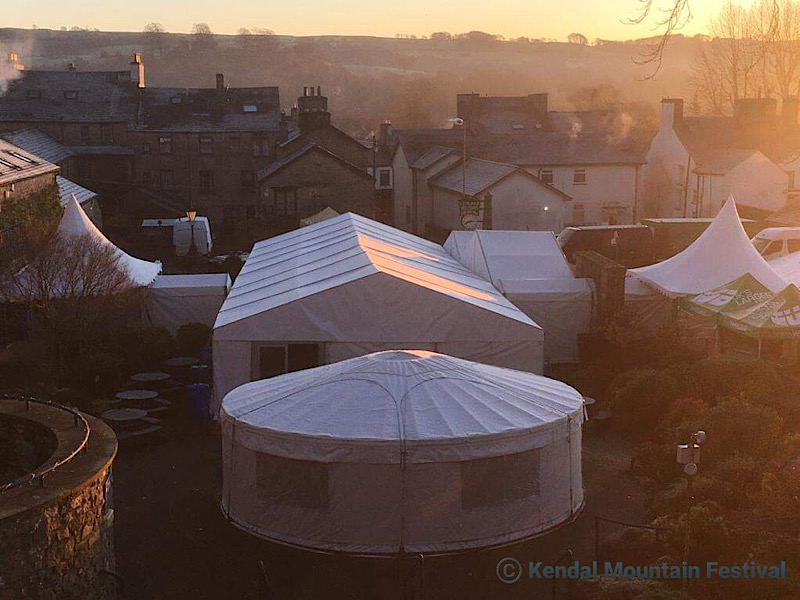 All in all another great festival, what I saw was a drop in the ocean to what is put on over the weekend. Between the all the venues that show films and talks, basecamp and the Columbia stage and the Literature programme (that is almost a festival in itself) Kendal Mountain Festival has grown into the main place for the outdoor world to flock to, spread the word and enjoy each other’s stories. That was year 39, next years landmark event might have some changes I am told. We look forward to finding out the exact details and enjoying it again next year.