As 2016 comes to a close it's time for our annual look back at the best of the year's Social Media in the MyOutdoors Awards.

While The Great Outdoors Magazine and the Outdoor Industries Association have their annual awards looking at the best products, brands and even personalities we look at the best service providers from PR companies to festivals and events. The news we bring you quite simply couldn't appear without the services these individuals and businesses provide, from gear tests to event news and podcasts to videos. We have no desire to compete with TGO and the OIA but our awards are a way in which we can give due credit to important contributors to the outdoor industry who rarely get the recognition they are due.

Although social media has been with us for a decade it's only over the last year or two that business, and brands, has finally got a handle on it. For far too long Facebook and Twitter, in particular, were seen simply as a further, free, advertising platform without reference to the "social" component of social media. Tweets and posts consisted of little more than a stream of "Sale" and product notifications with very little interaction between poster and user beyond the occassional reference to the number of "likes" or "ReTweets".  Social media, however, doesn't obey the usual laws of marketing and the ROI (Return On Investment) is much harder to quantify. Where social media does work for brands, however, is in interacting with customers and for Customer Services. These are the areas in which brands can differentiate from each other and the areas where some excel.

Best Use Of Social Media By A Brand

Social Media can be a double-edged tool for brands, with the likes of Facebook and Twitter providing an instant platform for consumers to express evrything from praise to condemnation and all in the immediate glare of millions of people. At a Customer Service level social media provides a valuable tool to not only deal with complaints but, equally importantly, to be seen to be dealing with any problems. As a marketing tool social media provides an unprecedented opportunity, in the right hands, to reach an audience of millions at low cost and a build brand awareness.

Looking back just a couple of years there was a tendency, particularly amongst the "big players" to see social media as little more than an extention of the traditional advert. Posts were predominantly self-obsessed with little direct interaction with their audiences and content was often limites to a breif notification of a product, or products, along with a price, and the results were almost predictably disappointing in terms of ROI. It's been refreshing, therefore, in 2016 to see the output from the likes of GoOutdoors and Cotswold Outdoor become less self-focussed and more conversational, with individual stores developing their own dedicated social media streams.

Selecting a Winner in this category was probably the hardest of all the categories and honourable mentions must go to Tentipi for their output which combines brand awareness with a recognition that consumers don't buy products for the sake of the product but for the experiences the products can open up. Their output of inspiring images across a range of adventure sports reflects a consumer base that is often interested in multiple activities beyond the reach of the products the company produces and embraces it.

The Winner of the Best Use of Social Media By A Brand 2016 goes to Inov8 who've combined an almost perfect mix over the year of quality customer service, elite advice and personal interaction. A pioneer of the "guest host" their coverage at events like the 2016 UTMB demonstrated social media at its best with output combining unique access to world leading endurance athletes with stunning up to the minute images that honestly reflected to experience of one of the world's greatest mass events. 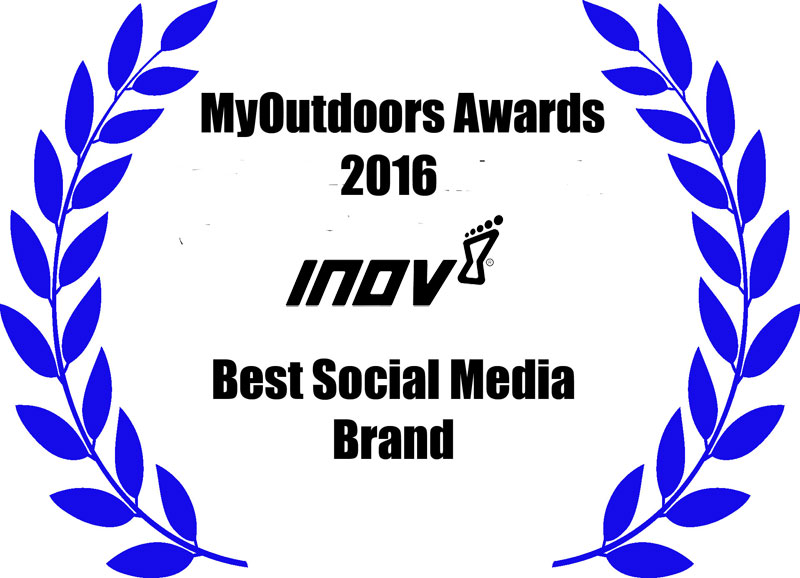 Best Use Of Social Media By A Public Service

The "Public Service" category covers Government, local and national, and public bodies such as National Park Authorities. It's also probably the category with the most constraints and the biggest gap between the poor and the exceptional. Yorkshire Dales National Park has to be commended for the regularity and diversity of it's presence, combining information with a willingness to engage on subjects not strictly within its boundaries, an area where many others fail. The Ordnance Survey are also regular social media users and have to be commended with the way it uses social media to highlight the #GetOutside campaign, though it does tend to be almost exclusively self-publicising at the expense of any non-OS originating news or discussions.

The Winner of the Best Use Of Social Media By A Public Service for 2016 goes to Cheshire East Ranger , part of Cheshire East Council. Cheshire East Rangers use social media extensively to provide the public with information ranging from its own courses and events to practical advice for those venturing into the outdoors and useful safety advice. 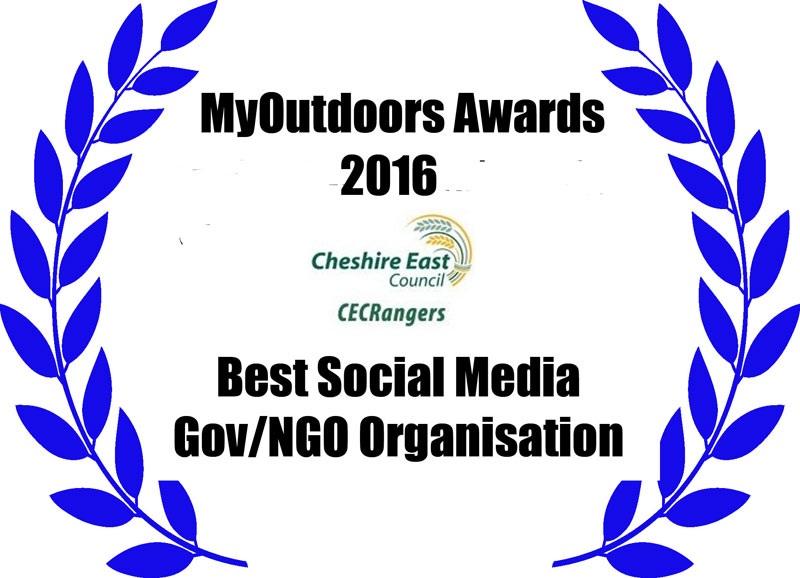 The Blog is probably the most recognisable use of social media nd the internet in the outdoors community. The range, and reach, of blogs are enormous, from geographically specific offerings to "embedded" blogs which add a personal touch to a brand's presence. Highly commended in this category and  Great Escape by Nick Bullock for it's honest, down to earth, portrayal of life at the cutting edge of mountaineering and the Berghaus blog where guest bloggers give unique insights into the real world performance of equipment in the hands of everyday adventurers.

The Winner of the Best Blog 2016 goes to Fiona Russell for Fiona Outdoors. Although primarily focused on Scotland and perticularly female athletes in Scotland Fiona provides a nearly non-stop stream of well written, well researched, news and reviews that appeals to an audience far beyond the boundaries of Scotland. 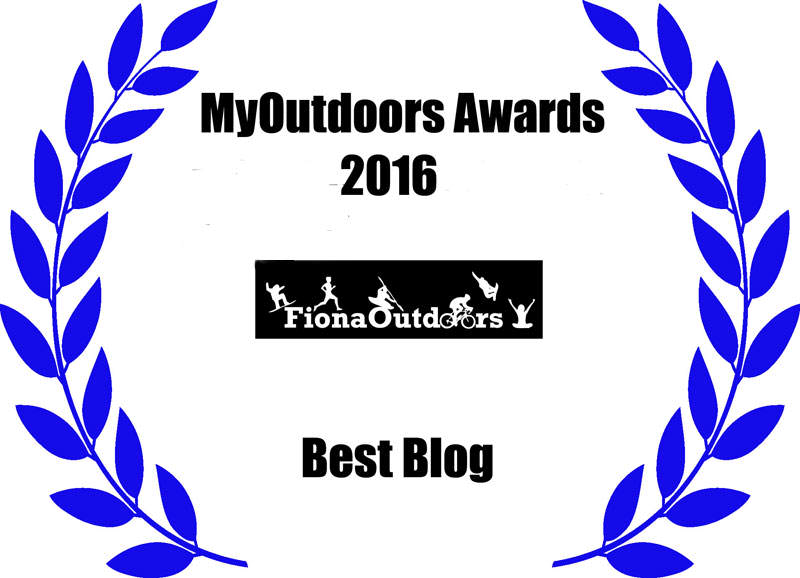 In the last decade the number of outdoors orientated festivals has exploded. From Basecamp Festival to Sheffield Adventure Festival there's something for everyone. Alpkit's Big Shakeout deserves an honourable mention for its family and activity based weekend that has come to signify the end of the summer and the start of Autumn. Likewise Keswick Mountain Festival has to be commended for its diversity and the way it engages everyone from beginners to seasoned athletes. With sponsorship from the likes of Lexus it's grown consitently year on year and 2016 undoubtedly marked its highest point to date with a full spectrum of celebrity speakers, brand presence and activities for all abilities.

The Winner of the Best Festival 2016 has to go to Kendal Mountain Festival. As the biggest event of its kind in the World, Kendal has raised the bar again in 2016 with a new layout that's more inclusive and accessible than at any time in its long history. The new themed sessions, an increase in free events and its ability to attract the finest speakers from around the world have seen Kendal cement its place as the UK's premier outdoors and adventure orientated festival. 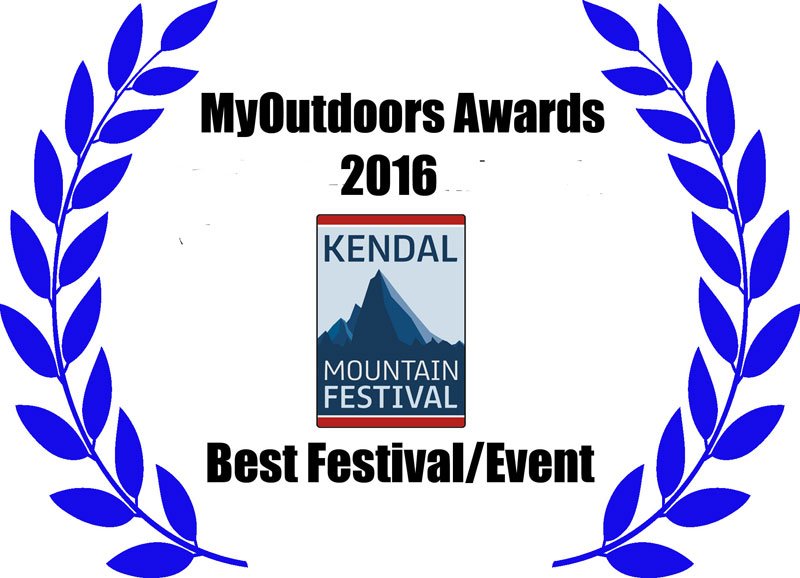 Best Use Of Digital Media

The technological advances of the last few years have seen an exponential growth in the breadth and depth of video produced every day, with social media providing a launchpad and distribution centre. At the same time affordable computers and software have enabled a new generation of producers across both audio and video with some of the leading proponents breaking through into mainstream broadcasting. Crowdfunding has seen niche films produced that would never previously have seen the light of day while the combination of digital cameras and the web sees our senses stretched daily with an array of stunning photographs.

While Terry Abraham has to be highly commended for his visually stunning Life of a Mountain: Blencathra and making the beakthrough into mainstream media on BBC the Winner of the Best Use of Digital Media 2016 has to go to Andrew White. Almost un-noticed Andrew has accumulated millions of views for his 3, so far, series of Walks around Britain through Community TV channels while at the same time producing a continuous stream of engaging podcasts and a social media presence that has attracted tens of thousands of followers. 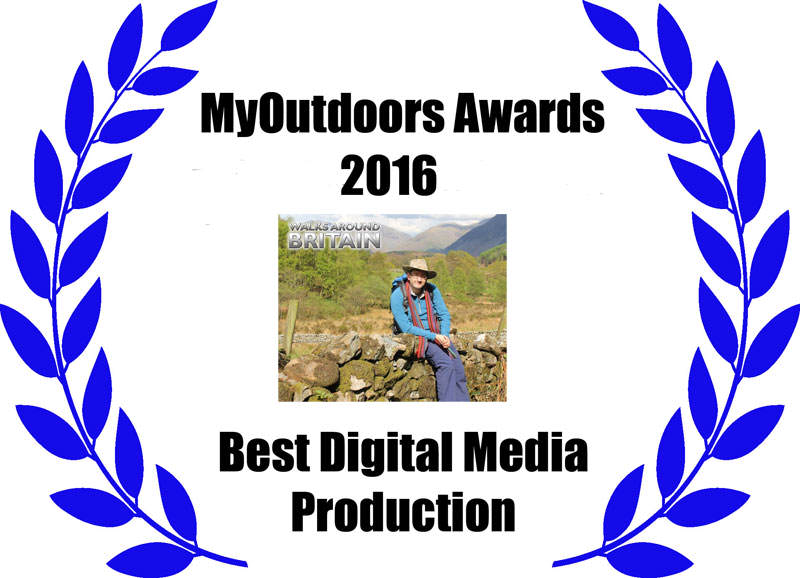 Podcasts have seen a revival in the popularity of audio and 2016 has seen the emergence of several new major productions. Chris Sleight has transferred the skills learned during years of broadcasting with BBC Radio Scotland to an impressive new series of podcasts under the name of Mountain while, as mentioned above, Andrew White has continued his popular series of Walks around Britain podcasts.

The Winner of Best Podcast 2016, however, goes to Niall Grimes for his irreverant, but enormormously humorous and informative series of Jam Crack Podcasts. With access to some of the world's leading adventure athletes and personalities Jam Crack was initially a short term "experiment" but its success has seen a one-off podcast develop into a regular series that's rapidly gained cult status. 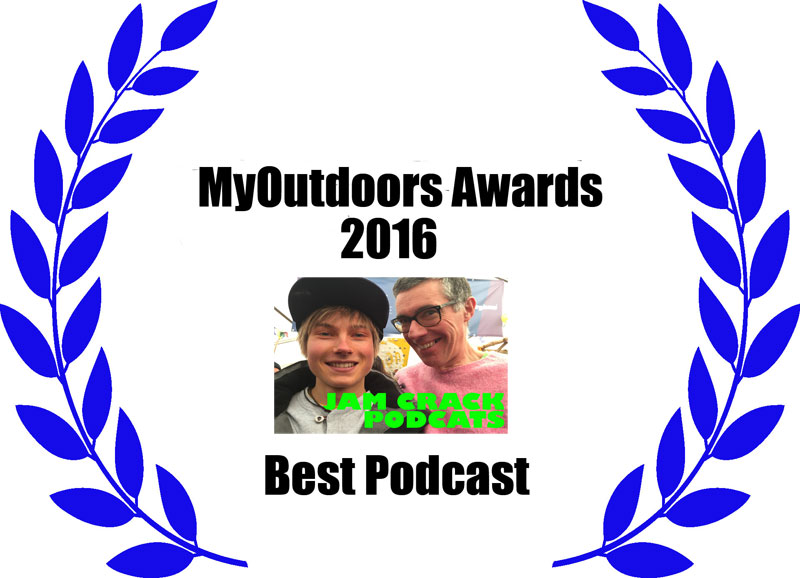 Often maligned the PR company is actually the lifeblood of the outdoor media industry. Quite simply without the "PR" we couldn't bring you the news and reviews that we do. Over the last few years the PR has had to make major adjustments from a print media dominated platform to a predominantly digital output, and it's not been an easy transition. In a fast moving world the best PRs have learned that Editors and Publishers don't have the time to extensively reformat content or chase complimentary images, but instead provide content that's ready to go live within minutes of being received.

East River have consistently provided ready-to-go copy with complimentary images and have combined it with a service that makes the journalist feel the two disciplines of journalism and PR are a team. In the last couple of months Spring PR have completely revamped their output to journalists to boast what are probably the most comprehensive press releases in the industry and have raised the bar to unprecedented levels. The Winner of Best Public Relations Business, however, goes to Right Lines Communications.

The foundation of Right Lines' output is clear, concise and publishing-ready content that makes the work required from Editors minimal, but beyond that the company combines industry leading response times for enquiries with a personal touch that makes every individual Editor feel as though they're getting preferential treatment. With a client list that includes top names like Berghaus and Keswick Mountain Festival alongside cutting edge manufacturers like Helinox the output from Right Lines covers everything from product development to sponsored athlete expedition news at a consistently high level, and does so in a way that not only produces some of the most read copy but produces it every single time. 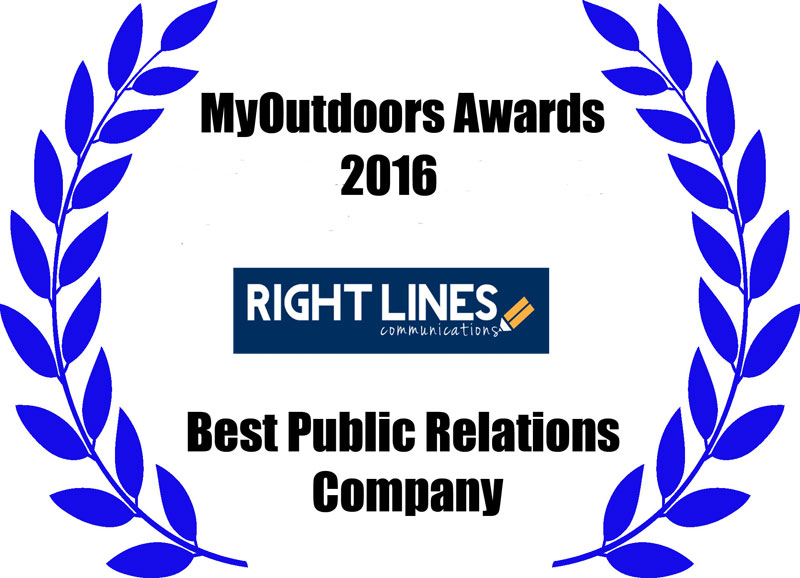 Best Use of Social Media

Each of the individuals and businesses mentioned above have embraced social media, and they're not alone. Vertebrate Publishing have to be commended for their use of e-publishing alongside their multi-award winning print output while Viewranger have evolved from one of several digital mapping companies into a world leading adventure portal. Chris Townsend continues to produce both authoritative and engaging content across a range of publications and the British Mountaineering Council have really embraced the full range of opportunities available through digital and social media.

The Winner of Best Use of Social Media, however, goes to Terry Abraham for his innovative use of social media in creating an audience for his groundbreaking films. Through a combination of regular teaser trailers and crowdfunding Terry has transitioned from YouTube clips to best selling documentaries while retaining a touch that's made many of his followers feel a personal connection. Through his Life of a Mountain series Terry has redrawn the boundaries of what can be achieved through individual dedication and social media has been a key to that success. 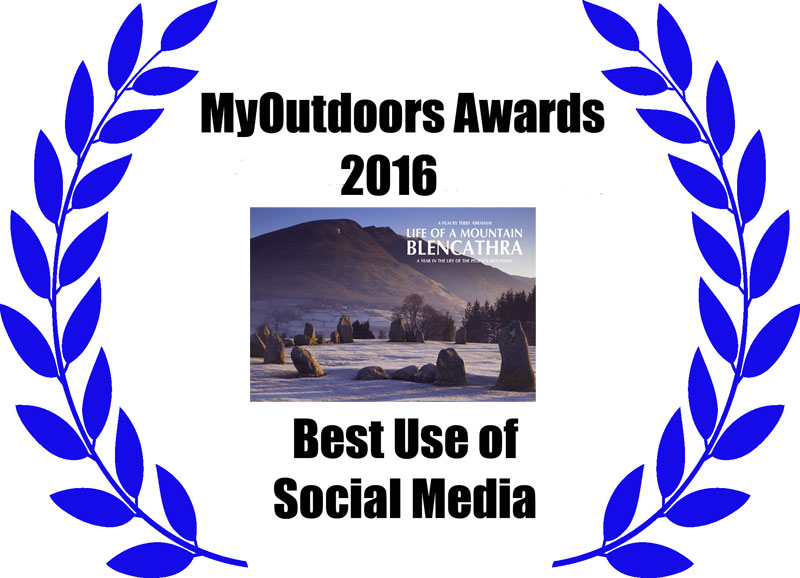 More in this category: « Berghaus wins national award for HQ refurbishment Outdoor industry giants join forces to launch the It’s Great Out There Coalition »
back to top