A sector alliance that was formed to tackle issues relating to microplastics has completed the next phase of its project to develop a harmonised industry standard for the supply chain.

The Cross Industry Agreement (CIA) has revealed the results of a fibre fragmentation trial that has been carried out in advance of establishing a CEN Standard (from the European Committee for Standardization). Once confirmed, the standard will also become an ISO standard under the Vienna Agreement, providing apparel manufacturers and policy makers with a vital tool as part of wider work to reduce microfibre shedding into the environment. 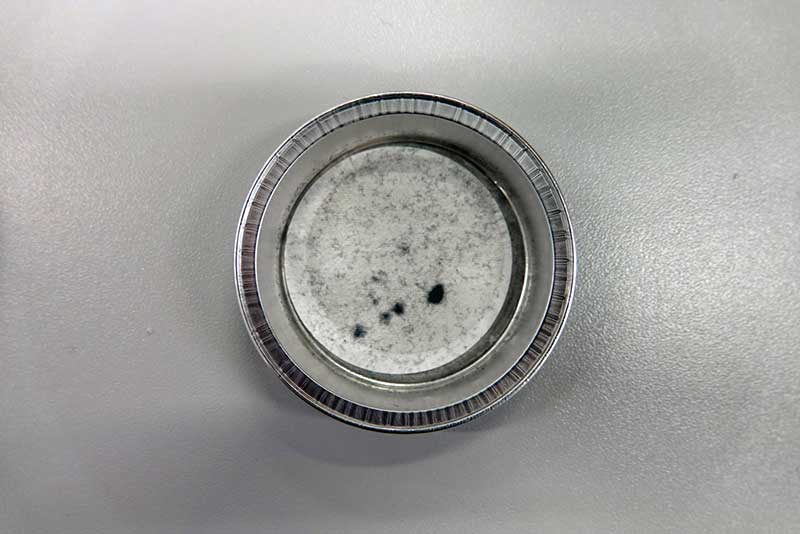 In 2018, five industry organisations agreed to join forces to proactively tackle the issue of microplastics, and signed the Cross Industry Agreement. The initial signatories were European industry associations that represent the European and global value chains of garments and their associated maintenance – the International Association for Soaps, Detergents and Maintenance Products (A.I.S.E.), European Man-Made Fibres Association (CIRFS), European Outdoor Group (EOG), EURATEX the European apparel and textile industry confederation, and the Federation of the European Sporting goods Industry (FESI). Together, the five organisations understood that the very first step to enable global action around the topic, was to agree a harmonised test method which would allow the collection and comparison of globally generated data, to aid the identification of solutions. Details of what the CIA involves can be found at https://euratex.eu/cia.

The microfibre shedding test method was developed thanks to the joint efforts and cooperation of experts from 28 European, American and Asian organisations; the result was handed over to CEN in 2020. Since then, representatives from the CIA have been working with CEN to fine tune details in order to meet the requirements for a CEN Standard. To verify the reproducibility of the method, the partners have carried out a round robin trial (RRT)[1] to determine if the method could be replicated in different laboratories and produce similar results. 10 organisations participated in the RRT, which was co-ordinated by the CIA, sending fabric samples to all of the laboratories involved and then collecting and analysing the data. 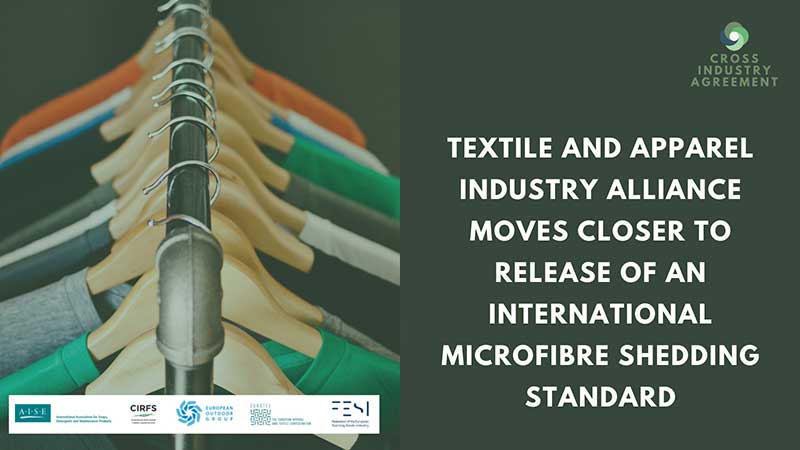 The results from the RRT show statistically significant consistency, both within, and between, participating laboratories, which demonstrates that the method is both repeatable in the same setting and reproducible in other laboratories.

The CIA has submitted the results of the RRT to CEN, with the intention that the CEN Standard is confirmed in the near future. Once that has happened, it will be promoted throughout the apparel industry and will become a key tool for researchers, businesses and governments as they accelerate efforts to reduce microfibre shedding associated with garment production.

Jan Robinson, scientific and regulatory affairs director at A.I.S.E., comments: “A.I.S.E. is delighted to see the harmonised method developed by the Cross Industry Agreement progressing towards a European standard.  This will provide a robust and recognised basis for a wide range of research, to characterize microplastic releases from textiles and to test potential solutions from industry partners on all sides.”

Frédéric Van Houte, director general of CIRFS, adds: “The standardised test method will be a major step forward. Not only will it help to correctly assess microplastics shedding from textiles, but it will also allow the industry to explore measures to reduce it.”

Dr Katy Stevens, head of CSR and sustainability at the EOG, adds: “A standardised test method has for a long time been the missing puzzle piece that has prevented significant progress in this area. We are delighted that the standard will soon be available to enable the industry to progress in both understanding, and mitigating the shedding of microfibres from textiles.” 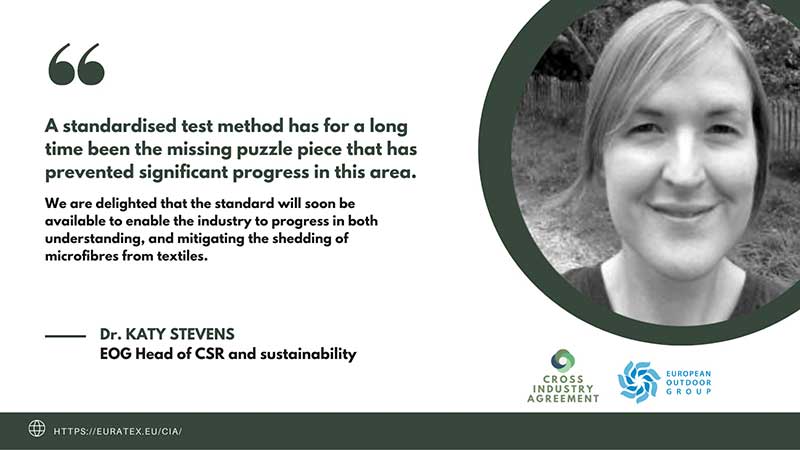 Mauro Scalia, director sustainable businesses at EURATEX, comments: “With the Cross Industry Agreement, industry and researchers have now accomplished a lot to shed light on microplastic release from textiles. EURATEX looks forward for the next phase: we need to find feasible and enforceable solutions to tackle such a global issue and use sustainable textiles in the EU.”

Jérome Pero, secretary general of FESI, comments: “Our members have been impatiently waiting for a standardized test method for microplastics shedding from textiles which will shed light on microplastics emissions. Thanks to the efficient and collaborative efforts of the Cross Industry Agreement and the research community this will soon become a reality, allowing companies and policy makers to make relevant choices to ultimately tackle microplastics emissions.”

[1] RRT test were carried out thanks to the support of Aitex, Centrocot, Eurofins, Henkel, Hochschule Niederrhein, Hohenstein, RISE, TMC, Tüv Süd, UL, and the University of Leeds.

More in this category: « EOG urges businesses to address the global supply chain challenge with unity and tolerance Jungfrau Railways appoints Ski Press to run its UK and Ireland PR campaign for 2021-22 »
back to top

MyOutdoors @MyOutdoors
RT @thealpineclub: This is tomorrow! https://t.co/yHVRAzHbSa Follow this link to sign up for a notification when the event goes live ➡️ ht…