When it comes to closed road sportives Prudential Ride London is the biggest. With thirty thousand riders attempting either 46 miles or, as nearly twenty five thousand do, the 100 mile version. A legacy event from 2012 the event is massivly over subscribed and just like it's sister event the London Marathon , it can be difficult to get a place. This year I was lucky enough to be invited to ride so I headed to that London to see why eighty thousand apply every year to ride through a city.

Like many sportives today, riders are required to attend registration in the preceding to days to pick up their rider packs. I'll admit this is a pain when you live in South Wales, but I understand the reasons. For closed road events it provides much needed custom for local hotels  and restaurants and also for a huge event like Ride London the logistics of getting every rider dealt with would be a nightmare, besides with the first cyclists setting off from 5am, perhaps staying up there is a good idea anyway. 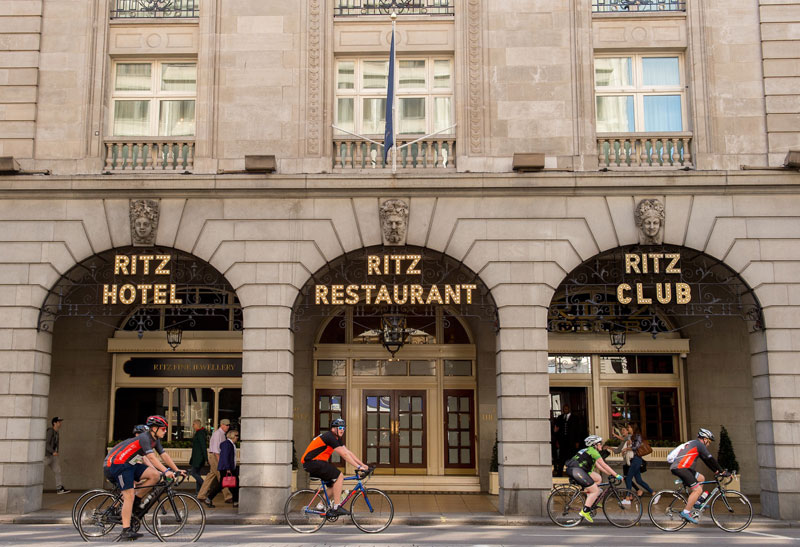 Starting from the Queen Elizabeth Olympic Park in East London there is also the issue of getting all the riders to East London with the extensive road closures the event requires. The organisers are really on the ball here. About six weeks before the event a pack is received with different transport options, these include river boats, the cable car from the O2 to the Excel, LDR options, drop odd points or doing, as I did, prebooking  a car park and riding to the start. I booked at Grosvenor Hill in Mayfair at a vastly reduced price and I'll be honest, my Citroen Cactus looked a little odd amongst all the Ferraris and Bentleys.

The ride from the car park to the start was clearly signposted and although the seven miles turned out to be ten it was a good warm up before the event proper. Or it would have been other than the eighty minutes in the start pen. A necessary evil though to thin the peloton out and keep safety to the fore.

Starting out from the QEOP the route bombs along the A12, through underpasses and along the dual carriageway. This is actually more fun than it sounds as the tunnels make a great noise and I got the chance to flick the finger at the HQ of my former employers at Canary Wharf. The dual carriageway also gives the willy wavers a chance to get it a little out of their system on a nice big road before things get technical, which is nice. 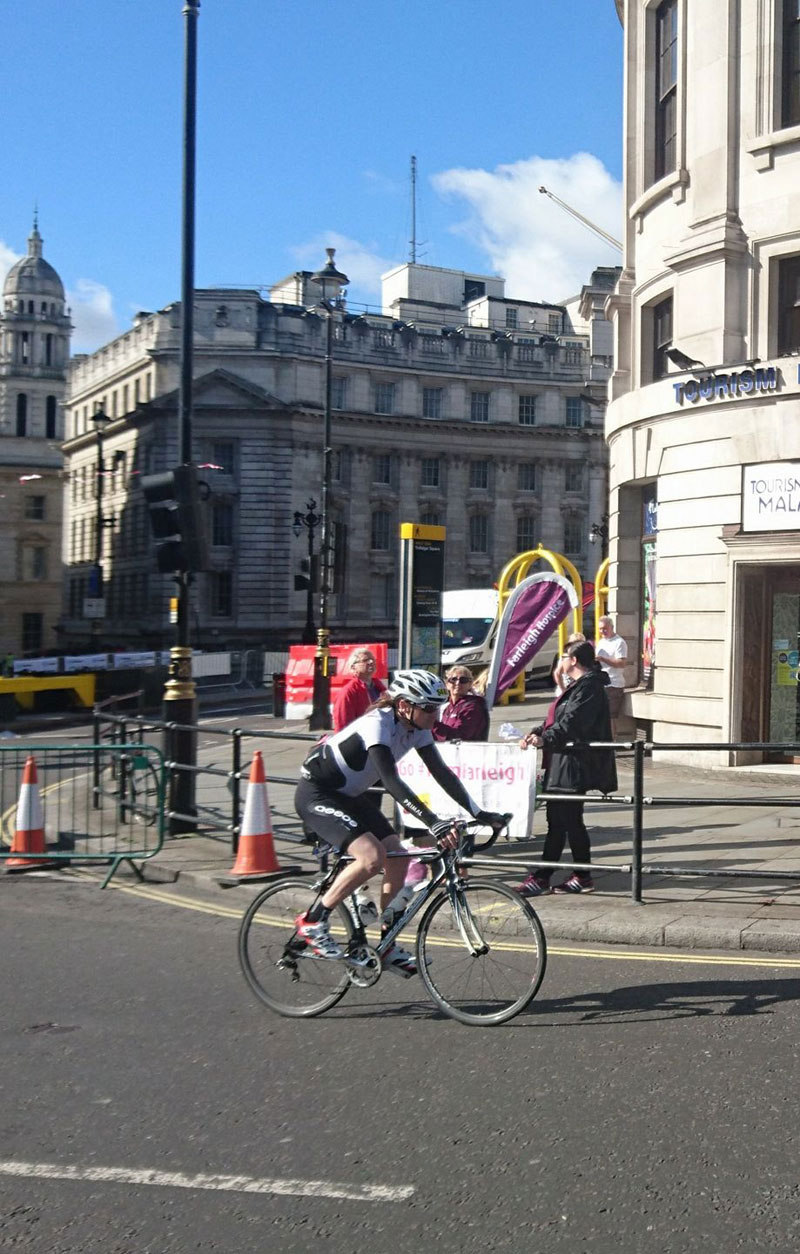 Soon you start hitting landmarks and Tower Bridge, Trafalgar Square pass by in a blur and before you know it Piccadilly is buzzing under your tyres free of traffic. Heading out of London towards Chiswick and on to Richmond Park the miles quickly tick by and the rag tag peloton of charity riders, club racers, ex pros, celebs, tandems, wannabes and those who aren't quite sure what they've signed up for colourfully snakes its way south to Surrey.

Huge crowds were developing in the towns and villages as the sportive went through even at the early morning times. Kingston Upon Thames was a particular highlight, music blaring, huge cheers and plenty of roadside support. Onto the picture perfect Hampton Court where the 46mile route split off and we moved into the countryside and soon the hills of the route. The famous Box Hill, used in 2012, compared to Alp D'Huez and mythical in these parts, but before that the steeper and higher Leith Hill, the highest point in South East England.

Newlands Corner provided a surprisingly steep warm up before Leith Hill and I got ready for the challenge. I'd done a little research before the event and I'd read some horror stories. I balanced this up with the fact I usually train in the Brecon Beacons and had an open mind.

Leith Hill is a nice climb. Steep enough to challenge but not too hard. The usual problem of riders pushing in the middle was there but a shout of on the right and it was easy enough. It was way easier than my usual stuff but I really enjoyed it. The descent however due to the inclement weather was a greasy, horrible and muddy nightmare. But that's cycling. 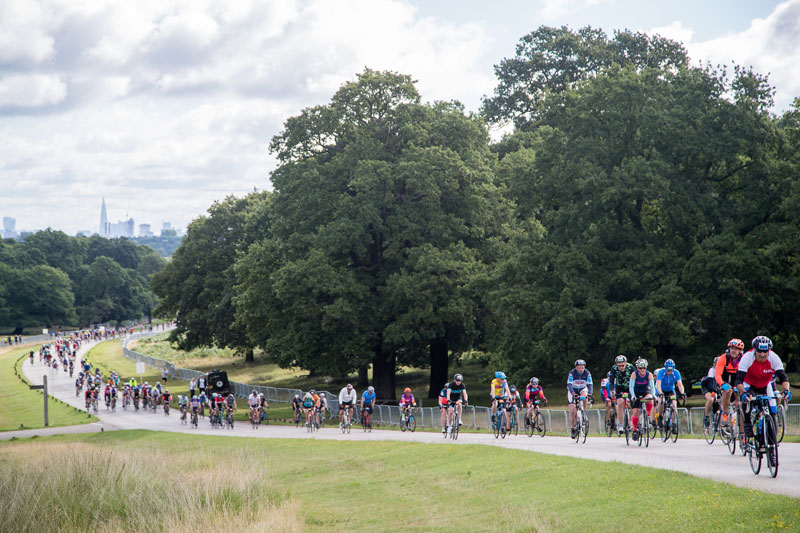 The bottom of Box Hill was marked by a Karaoke version of seminal Dolly Classic, 9 to 5, followed 100m later by the blasting out of Immigrant Song. Well as you do. The climb is lovely and picturesque but I'll be honest. It's actually really easy. OK I admit that's easy for me to say and I'll not damn anyone for pushing but the way media outlets have talked about this climb is overhype. Seriously though I loved it and now I know it I'll really attack it next time. The climbing done and a lovely following descent and the route led back to London. 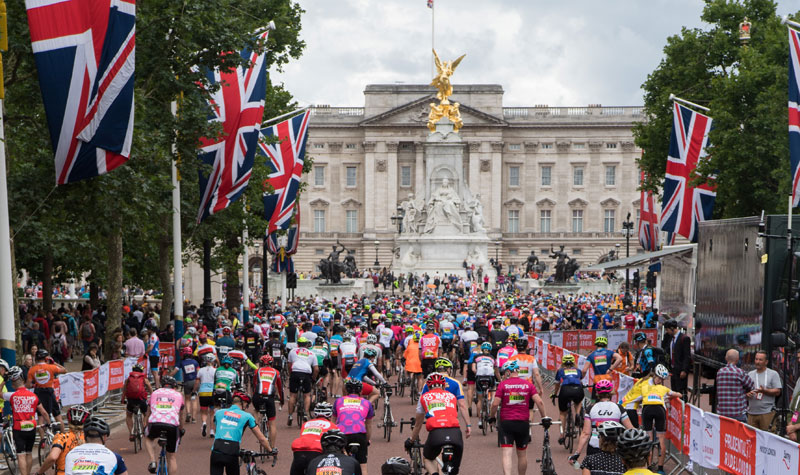 The run into to London is a joy. Those who have energy left can build up a bit of momentum and as the crowds build through Leatherhead, Esher, Kingston(again), Wimbledon and Putney it's easy to feel like one of the Pros that will riding this same asphalt a short time later. Riding along the Embankment before turning at Westminster up Whitehall and the final leg through Admiralty Arch and finally a sprint finish on the Mall the route is done and picking up your medal in front of thousands and the waiting media the ride is done.

So about Prudential Ride London Surrey 100. I'd heard a lot of negativity about it being a crash marred nightmare. Yes there were a few crashes but in my experience no more that any other sportive I've done. The route is by far the easiest I've ridden but it makes the most of what's available and anyway too many sportives are about steep and the challenge. A hundred miles in a challenge in itself and perhaps it's nice to have a sprinter friendly route for once. Riding through London on closed roads is an experience that every cyclist should try to. The ballot opens soon and I recommend applying. 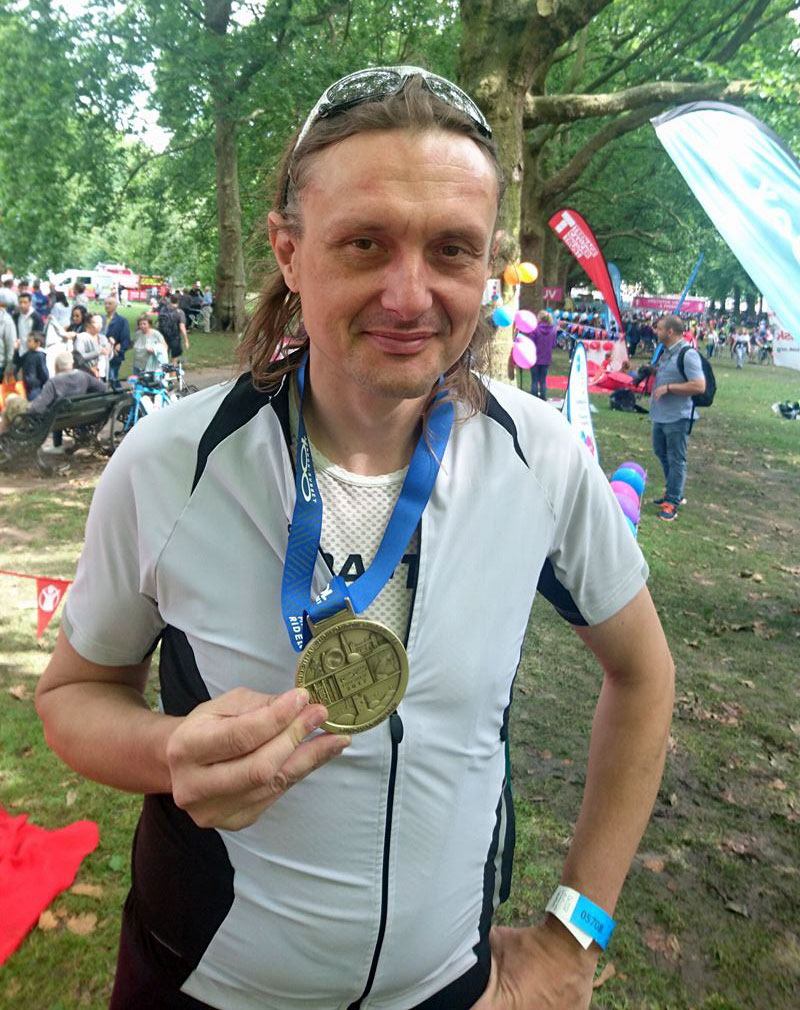 Thanks To Naomi Dufee of London Marathon Events for the invite to ride the Prudential RideLondon-Surrey 100 and all your help.

More in this category: « Ahead of Le Tour - A Morzine Road Ride A Day with Anna Frost - trail running Coed y Brenin »
back to top