Organisers have unveiled full details of Salomon Skyline Scotland® 2020. This year’s schedule offers two days of mountain running that includes races for all ages and abilities, ranging in distance from 5k to 52k, plus trail runs for children.

From Kinlochleven, Salomon Skyline Scotland® will give runners the opportunity to race in the heart of the stunning scenery of the Scottish Highlands on 19 and 20 September. Entries are now open for all of the events at www.skylinescotland.com.

Salomon Skyline Scotland® 2020 will deliver a combination of ‘skyrunning’ and trail races, with varied opportunities to take part in the growing festival. Among the returning races will be the Salomon Ring of Steall Skyrace™ and event organisers have confirmed that it will be the final event in the UK’s new Golden Trail National Series, making it a qualifying pathway to a global series. 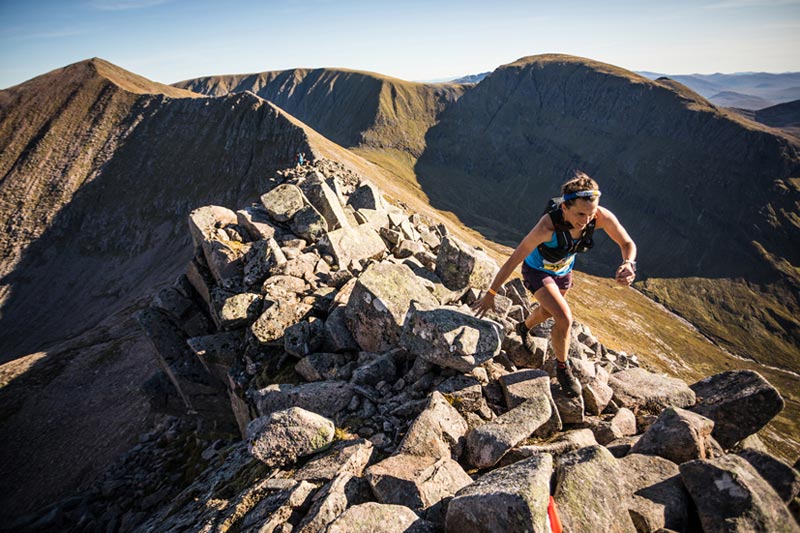 Presented by Salomon, Skyline Scotland® 2020 is also sponsored by EventScotland and Ellis Brigham Mountain Sports, and each organisation will have a strong presence in the Event Village in Kinlochleven. The village will be open throughout the festival, featuring catering, inspirational speakers, live music, big screen entertainment, and exhibitor stands.

Governed by the International Skyrunning Federation (ISF), the growing sport of skyrunning is the most extreme form of competitive outdoor running, as defined by altitude, terrain and technicality. The simple logic of the sport is to reach the highest peak in the shortest time from a town or village and participants are likely to encounter technical running terrain, including scrambling sections. The Salomon Skyline Scotland® 2020 programme includes four skyrunning events.

First out of the blocks on Saturday 19 September will be the Salomon Ring of Steall Skyrace™. Launched in 2016, the race has already established itself as a classic skyrunning event, attracting some of the best mountain runners in the world to Scotland. The route of 29k and 2,500m of ascent incorporates two lofty ridges within the Mamores (an east-west series of mountains), including the Devil’s Ridge, with Glen Nevis visible ahead, a yawning drop far below, and Ben Nevis towering beyond and above.

Already part of the Golden Trail World Series (GTWS), this year the Salomon Ring of Steall Skyrace™ will be final event in the new Golden Trail National Series (GTNS) in the UK, which aims to bring the strongest and most ambitious off-road runners into a single national ‘super circuit’. With qualification for the GTNS Grand Finale in the Azores and the chance to compete in the GTWS up for grabs, the race is expected to attract a very competitive field of athletes. 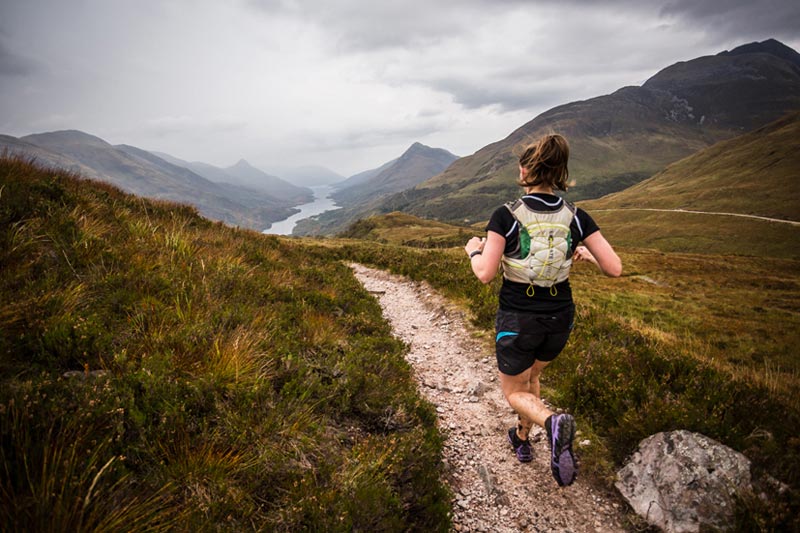 Also on Saturday 19 September, the Salomon Mamores VK will follow the well-established ISF Vertical Kilometer® format, in which participants follow a marked course, gaining 1,000m of height in less than 5k. Participants are set off at timed intervals with the winner having the fastest overall time to the summit. Although physically arduous, the Salomon Mamores VK™ does not require scrambling or rock climbing experience and is therefore suitable for any runner who is up for the challenge.

The most demanding race of the weekend starts early on Sunday 20 September. The Salomon Glen Coe Skyline® follows in the finest tradition of the most prestigious skyrunning races, fusing mountain running and alpinism in a pure test of speed, endurance and skill on an uncompromising, world-class course. The route features long and sustained sections of scrambling (roughly equivalent to ‘Moderate’ standard rock climbing), traversing high and remote mountainous terrain. The event is only suitable for highly experienced competitors, with all entrants strictly vetted for experience. Starting at 7:30am, the race will cover 52k, with 4,750m of ascent.

The Sunday schedule will also include a second 52k race, the Salomon Ben Nevis Ultra™. Featuring remote Scottish glens, technical single track, airy ridges, and high mountain passes, the very challenging course is designed for the boldest all-round ultra-runners. With almost 4,000m of climbing and great variability in the terrain, the race includes a traverse of one of Scotland’s most famous ridges, the Càrn Mòr Dearg Arête, leading to the summit of Ben Nevis.

Salomon Skyline Scotland® 2020 will present a variety of trail races that will give even seasoned trail runners a genuinely tough challenge amidst the spectacular Lochaber scenery. After strong demand in 2019, a line-up of 5k, 10k and 18k events will return this year, all on terrain that is trickier, and involves more height gain, than the average trail race.

Billed as Britain's toughest 5k, the Grey Mare’s Trail Race will start at 10:30am on Saturday 19 September. The route shares some of the same terrain as the Salomon Mamores VK, which is an indication of the short but very sharp challenge for participants. 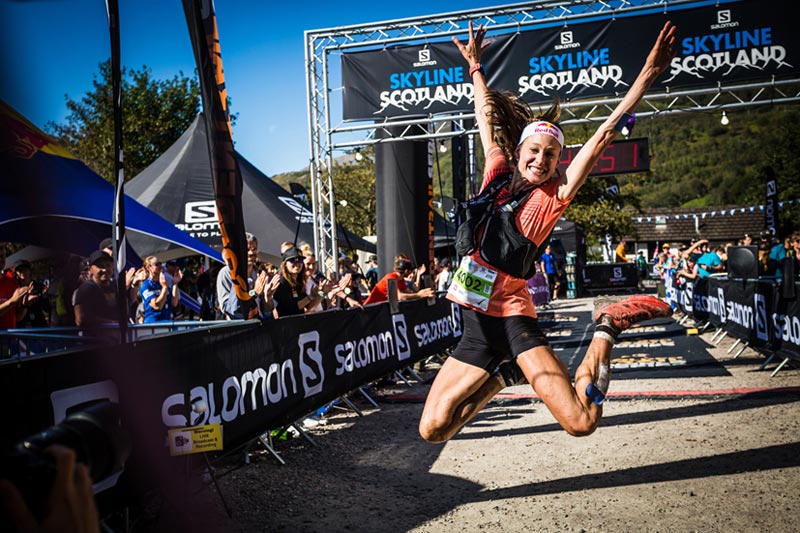 Starting at 10:30am on Sunday 20 September, the Loch Eilde Mòr Trail Race is 10k and will take runners into beautiful remote terrain near the River Leven. Held on the same day and sharing some of the route, the Three Mealls Trail Race is a challenging 18k event that will take participants to stunning locations and breath-taking views.

Organisers hope to attract junior trail runners to the 5k and 10k races, offering places at half price for participants aged under 18. Runners from the age of 12 can take part in the 5k and the 10k event accepts entries from those aged 14 and over. In addition, on both Saturday 19 (10:05am) and Sunday 20 September (12:45pm), young athletes will be able to tackle a ‘Fun Trail’ run, starting and finishing at the Ice Factor in Kinlochleven. The runs are aimed at youngsters aged 6-12, but adults who wish to run with their children will be welcome to join in.

Open throughout the festival, the The Skyline Scotland® Event Village will be located next to the Ice Factor in the centre of Kinlochleven, and will provide the chance to mix with some of the leading athletes and local adventure heroes. There will be a full schedule of speakers and Q&A sessions, including the team from Girls on Hills, Scotland’s only guided trail running company for women. The event’s retail partner Ellis Brigham will be on hand with the latest kit and advice, and visitors will be able to find out more about leading outdoor brands, with Salomon, Petzl, La Sportiva, Harvey Maps and many more in attendance. The event village will also host live music and show a live race leaderboard and footage on a big screen. 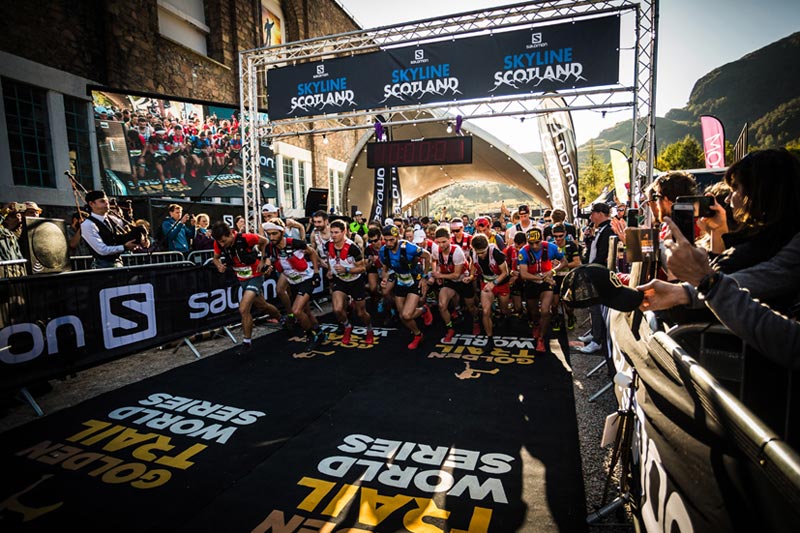 Race director Shane Ohly, of event organiser Ourea Events, comments: “Salomon Skyline Scotland is now firmly established as one of the ‘must do’ events on the international mountain running calendar. Not only do we put on enticing, iconic races that attract some of the world’s very best competitors, but we also offer a great variety for runners of all ages and abilities. Add in all of the attractions in the Event Village, plus the stunning setting, and we will deliver a unique and compelling festival of mountain running.”

Additions to the Salomon Skyline Scotland® 2020 programme are being planned and will be revealed in due course. Entries are now open for the skyrunning and trail races at www.skylinescotland.com. Races have sold out quicker year on year and organisers expect the events to fill up fast again in 2020. Keep an eye on the website and follow @skylinescotland on Twitter for the latest news from Salomon Skyline Scotland®.

More in this category: « Oman by UTMB - from oil to adventure
back to top