The Chalet Experience in The Diamond of the Alps

As I've become a more accomplished practitioner of sliding down hills on planks with a dramatic flourish on stopping at the bar, I've found that one week a year may not be enough. The problem is that with Skiing being such a social activity it can be difficult to get the time together or organise a group. So I had the idea of travelling alone after all I'd done with it my bike could I do the same with my skis.

A meeting with a friend at a trade show produced the suggestion of a Chalet break in the Austrian resort of Obergurgl. The chalet mmm well. I wondered about that. I'm quite prepared to be the sad loner sitting alone at dinner in a hotel, as a writer you get used to it but how would I fare in a chalet with families and/or stag trips and for a notoriously fussy eater (if you ain't chips then you ain't coming in) what if I didn't like the food. Finally who would be there on the piste to take my dramatic action shots, which are always natural and not posed, an effect you just can't get with a selfie stick. 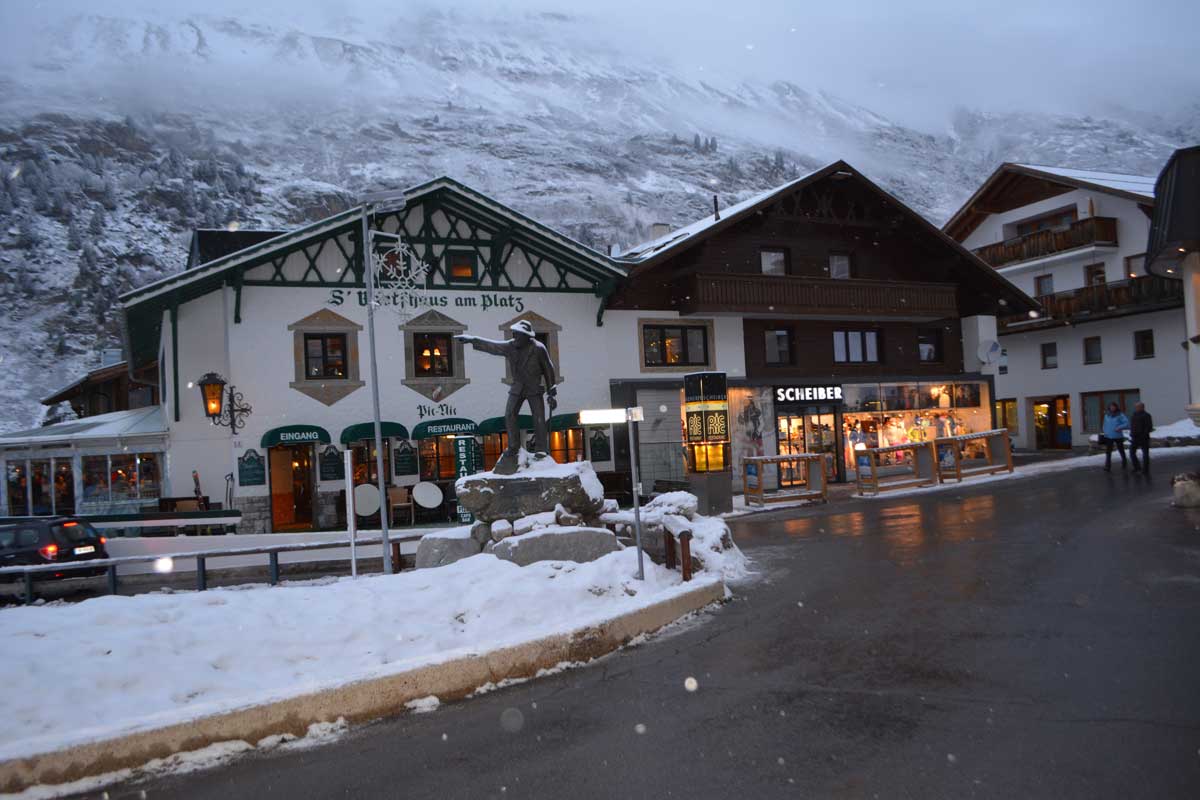 Bravely I entered this and challenge and as I started down at the snow capped peaks of the Tyrol on the approach to Innsbruk I became excited about the coming days. After being left in the dark on a mountainside by a certain company in Borovets a few weeks earlier which wasn't exactly a "diamond" service I was expecting a lot more of my hosts, Ski Total on this trip. A smooth transfer on a comfortably heated bus wit a bonus of the driver not using his mobile phone once during the entire journey, I was happy to have the chance to just view the, well view without the need to engage with other humans. My lift pass was to be provided by Obergurgl/Hochgurgl tourist board so that would come later but I watched as the reps smoothly dealt with the passengers and made sure all information and paid for services were provided.

At the chalet Steph, she told me off for calling her a host so I'll just call her The Boss, sorted out the rooms and gave us a brief rundown of events after which I went off for an explore of Obergurgl .

Maintaining an authentic charm whilst also having a modern resort convivence and buzz is a difficult balancing act. For a 40 something like me I felt it was just about right. Maybe a younger party animal would prefer somewhere a bit more hedonistic and certainly the prices at the resort may be prohibitive for some but for a mature chalet guest. Yes probably right.  With some nice restaurants and decent pub thers's a good range and If it's a bit of raucous apres ski you're after then there's the Nederhutte. Dancing on tables in ski boots IS compulsory and with the choice of either a floodlit ski down an easier piste or a skidoo taxi (free) back to the town and your chalet hotel it's worth doing. 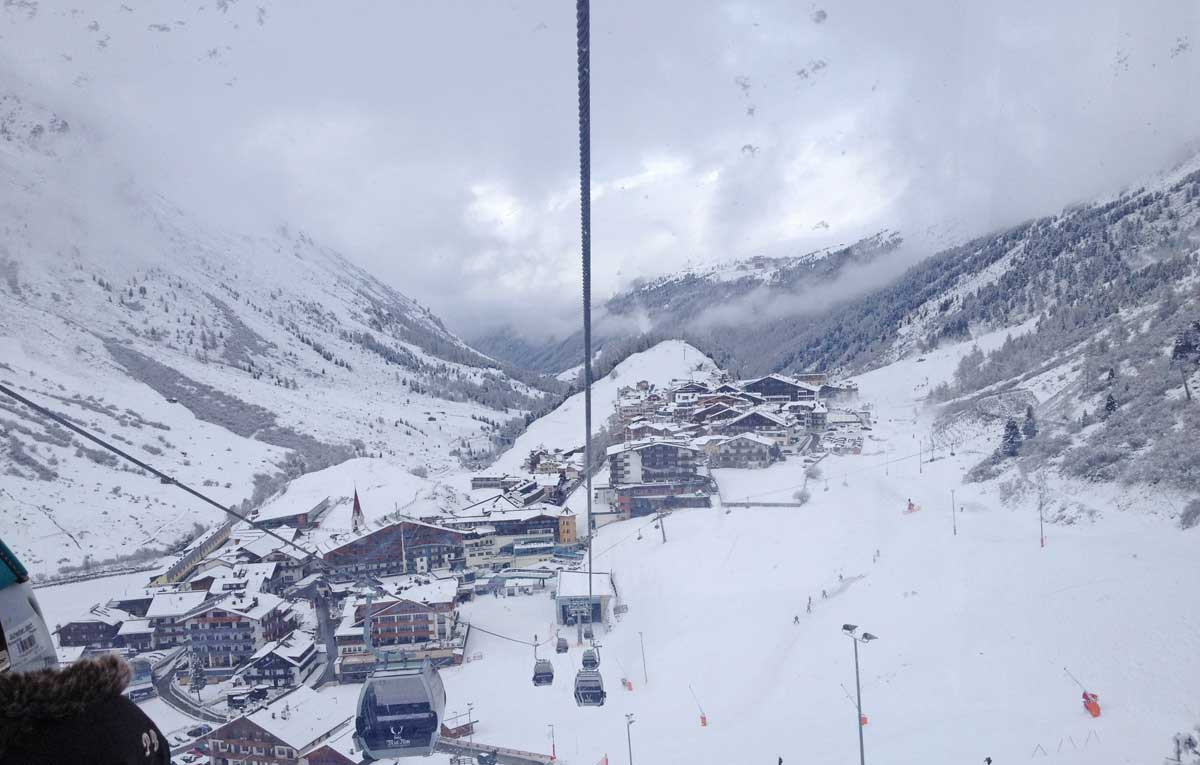 Obergurgl is a few kilometres from Hochgurgl where your pass will also be accepted. Linked by free ski buses or the Top Express gondola there is access to 112km of slopes of varying difficulties. In my opinion the runs might be undegraded a little especially for novices but with mostly good light and fantastic snow the skiing was extremely good. The pistes are extremely well maintained and groomed and the Austrians seem to have the lifts down to a tee. I can't remember once somebody skiing over my planks in a queue or an instructor pushing a class of 48 kids through in front. After France and Italy this much appreciated.

When you get bored of skiing or even a little cold there are plenty of places to get a beer or a coffee or even a Bombardino almost as good as across the border in Italy and fancy a change completely? You could pop down the road to Solden and try some wellness treatments or do what I did. Hire an old fashioned wooden toboggan and try the specially created run at Hochgurgl. When I was a young lad picking leeks in South Wales the once every 27 years event of getting enough slush to go sledging on meant we didn't have such things as proper toboggans and so we "borrowed" plastic safety hoarding from road works. These were much, much easier to control than a toboggan. If I crashed once on the 2-3km run I crashed 20 times. Covered in snow and giggling like a small child I got to the bottom and jumped on the gondola to go again and was even worse. Not as good as paret but a fantastic laugh I'd really say give it a go after all you're supposed to be on holiday. 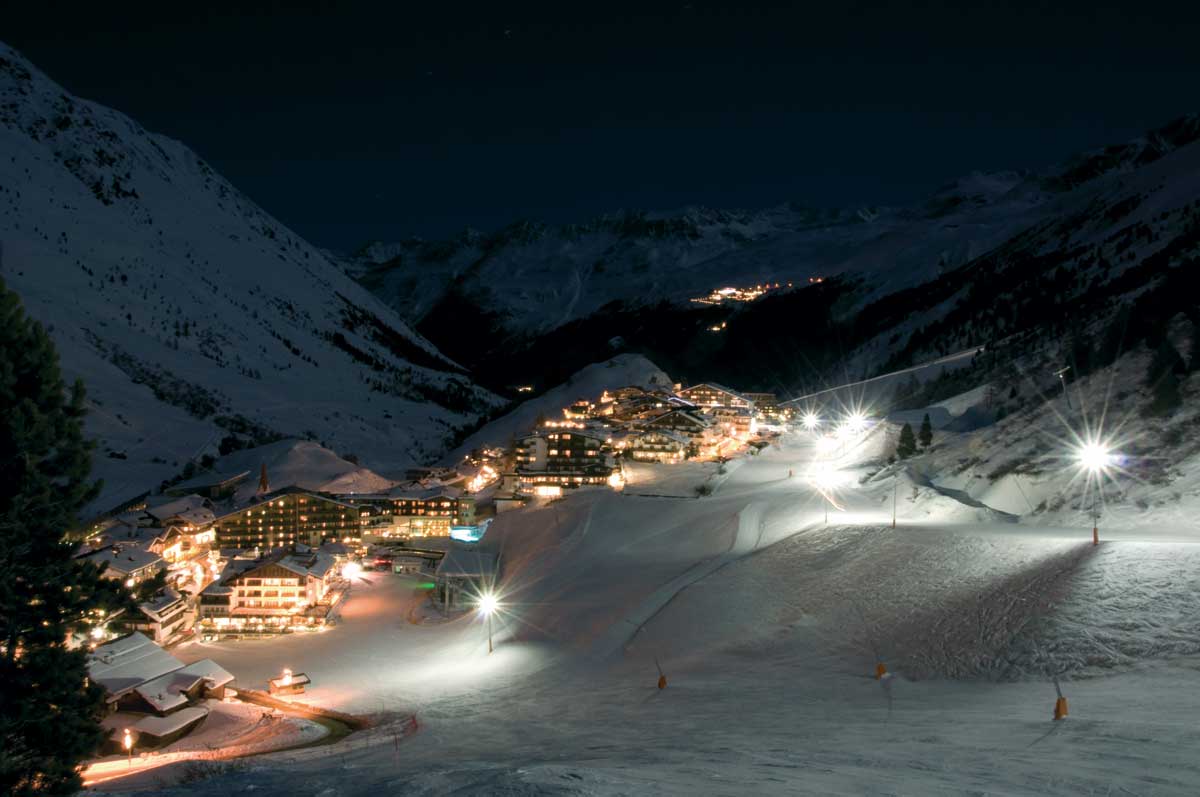 Obergurgl had certainly produced the goods but what about the whole chalet experience? I'd opted for a trip with Ski Total which would be a child free chalet. Great for me. I love my daughter but barely tolerate other peoples kids. With the pice point at he chalet being what it is it was unlikely to have attracted the stag party crowd so that felt good but would I actually enjoy it?

I'll admit that beforehand it can be a bit daunting beforehand if you think about it too much. Sitting down to dinner with a group of people you've never met sounds strange but most of us have probably done that at some point on a work training day or conference. Ski Total had arranged plenty of ice breaker events for the early part of the week such as a quiz (and I'm sorry Isobel but I was right about that question the film was Empire Strikes Back) and ski hosting. I regret that I didn't partake of this but felt, probably wrongly, that I wouldn't be a competent enough plank slider. Reports I heard back certainly were glowing and Kudos to Isobel our rep for that.

Not deliberately I sat with various groups during the week at breakfast and dinner and found a relaxed easy going group. Different types of people with varied vocations listening to people was great and even a Brexit debate remained sensible and friendly. Being a Swansea boy naturally the epic film Twin Town came up in conversation and was quoted almost word for word. Fatty Lewis would have loved it. Chalets are great for this, meeting people and hearing there thoughts and experiences is something that is too often neglected. Social media should be about this but too often is about getting your say in but if nobodies actually listening then what's the point. Living in a world of soundbites, memes, snapchat filters and emojis the simple act of sitting with someone and discussing life, politics, beer and flat light on the piste over a carafe of red wine has been lost and that's a real shame. 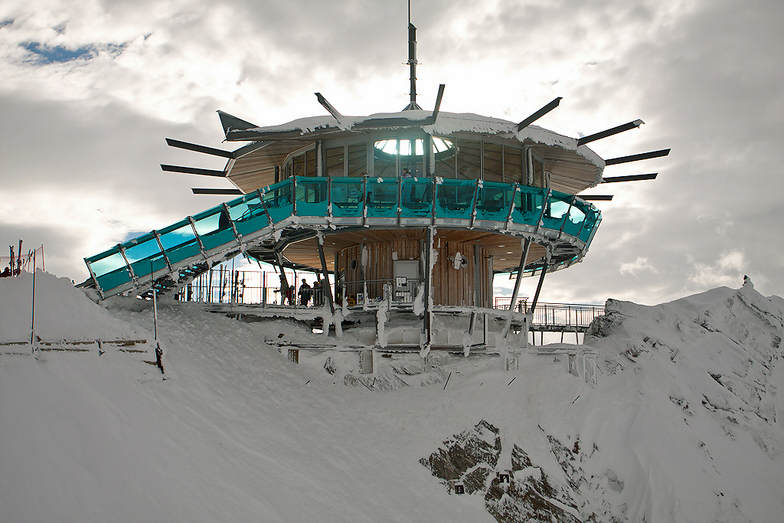 Food wise, I pretended I wasn't half Cornish for a week and abandoned my pastry and potato based diet. Ski Total have actually employed proper chefs. At previous place dinner has been by gap year students who although try don't have the experience or skills to produce good food. For example instant coffee in Italy!!!! Raspberry Cheescake actually being jam on a digestive. No not good enough but in the chalet in Obergurgl with Ski Total I ate food that's normally only for travel writers. I even ate Sticky Toffee Pudding, which I usually hate, in fact I had two portions.

So did I enjoy the chalet experience? On the whole yes. Perhaps having a set timetable is a bit restrictive but to a certain extent that's my choice. I was free to go out for dinner but perhaps the thought of having already paid for it influences that choice. Having said that the tripe served up earlier in the year ws paid for and I still went out. having a group of people is great and there's enough space to get some peace. Not having the big hotel gives a degree of comfort and certainly the room was far nicer and homely than an equivalent hotel room.

Whilst Britain suffered the Beast from the East I was sliding down hills alone. I'd do it again in a heartbeat. I could ski in Obergurgl & Hochgurgl for many years and still find new runs some of which may just take me to the front door of a chalet with conversation and good wine.

More in this category: « Telegraph Ski & Snowboard Festival turns 45 How to get ski- fit and avoid injury, tips from Olympic skier Rowan Cheshire »
back to top