Danny Bent, founder of Project Awesome and The London Relay, selected a small group of men and women, of varying fitness levels and ages, to accompany him across the scenic length of Iceland, in its first ever known multi-marathon attempt.

Previously, Danny has organised a host of events and projects to bring people together, to raise awareness and raise money but this event surpassed itself.

“The silver-grey landscape of the Icelandic desert was utterly endless. The weather was horrendous. The isolation was beautiful, but brutal, not least on the mind.”

The 209 mile route was scuppered by road closures, due to heavy rain making river crossings impassable, but they decided to risk wading through the freezing water, regardless. Setting out in Akyeria, very few knew each other. Six runners had never run a marathon. Most hadn’t run over 26.2 miles. None had completed a multi-day event. Despite that, and extremely tough weather conditions, mostly at heights of 3300 ft, they completed the 209 miles in just over 10 days. By the end of their amazing feat, they had all become lifelong friends. 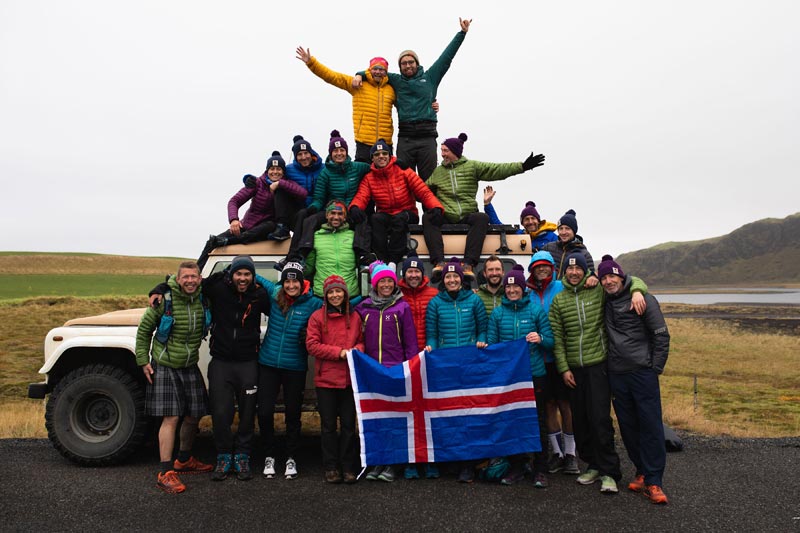 The aim of the run was to see what the human body is capable of. An enormous amount, they discovered. They spent 9 days, running approximately a marathon a day, through hard winds, rain and relentless ‘black’ desert, and camping at night in freezing temperatures. Their only support was a two-man team to help them set up the mess tent and other affairs, and their only significant rest was on day 7. 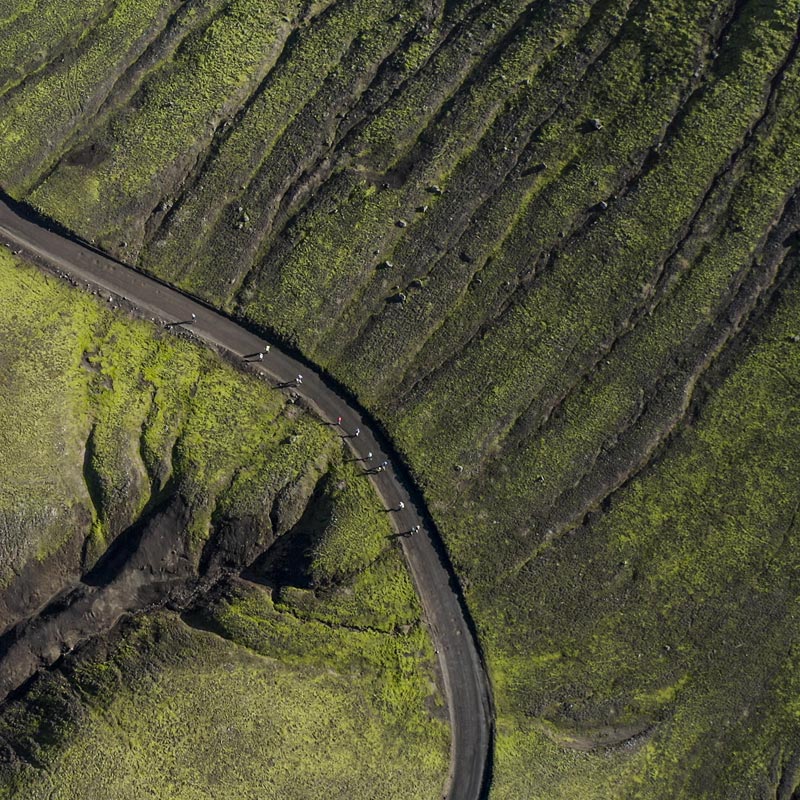 On the third night, it was already raining heavily, when a huge sandstorm whipped up. The sand battered the runners, filling their eyes, ears and noses. That night, they had to sleep in the mess tent as the ground wasn’t compact enough to hold down their smaller tents. 24 people were crammed together, with no space to turn. 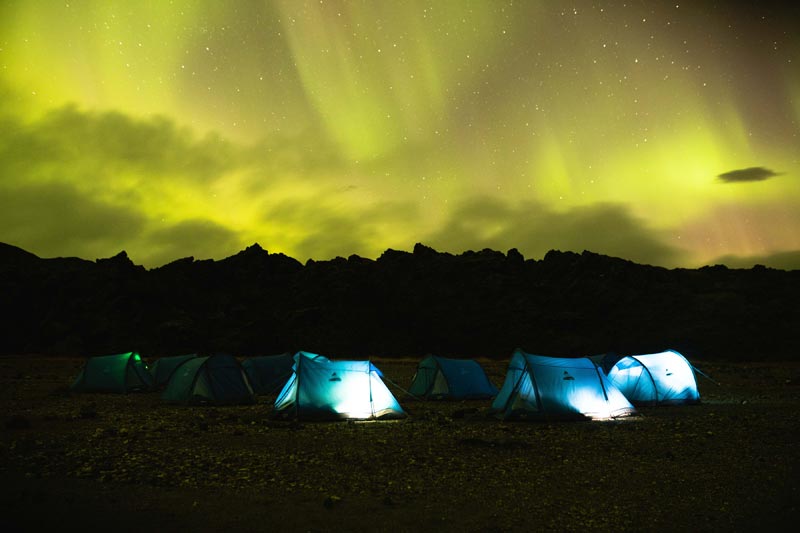 “Occasionally, you’d feel someone whip around as their leg went into spasm, or cry out as cramp kicked in. Going to the loo you couldn’t help falling over or treading on people.”

By day five, in the desert, their bodies were physically spent, swollen, held together with tape, and rattling with painkillers. But they knew that, together, they would be able to overcome it. As they shuffled along, sometimes questioning their ability to carry on, stumbling over from time to time, the others would be there to help to pick them up and keep them going. Despite dizziness, hallucinations and tears, mentally and emotionally they clung together in their joint goal. Surviving on only ration packs of dried food mixed with water. 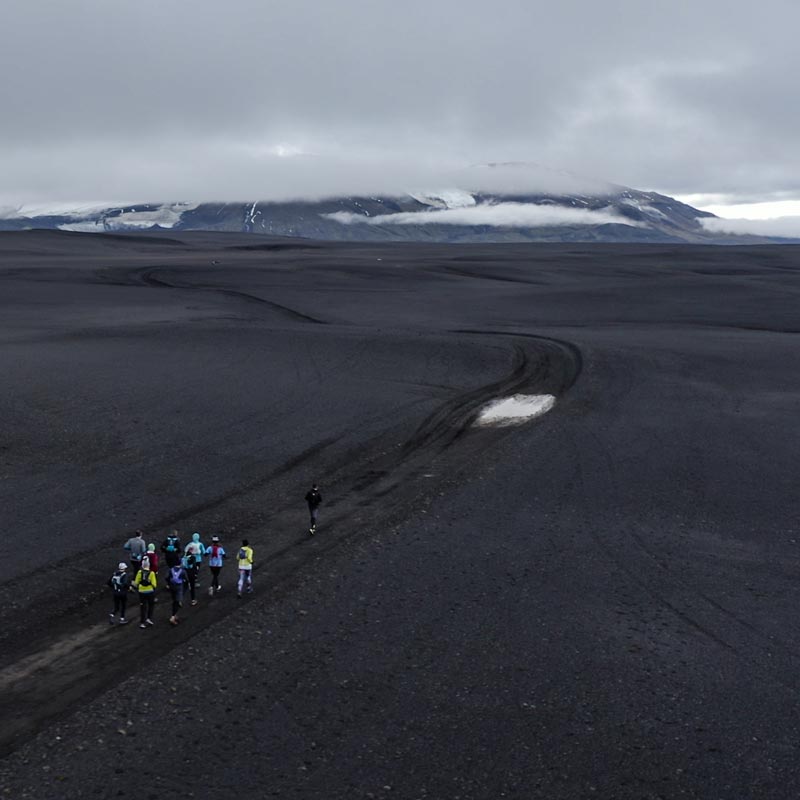 “The sun burnt our faces even as our lips and skin cracked under the cold. To keep spirits up we sang, danced, joked, cajoled, dragged and bantered our way to the end of each day.”

On the rest day, a wonderful thing happened. One of the runners proposed to his partner. He’d carried the ring in his running vest the whole way.

The last two days, they ran through glaciers, volcanoes and lava fields of the national park. They saw waterfalls, vistas and the Northern Lights three times.

“The last time was ridiculous. The lights filled the sky; swirling and weaving together as if celebrating our run. It made your heart skip a beat. Mother Iceland just kept on giving.”

18 out of 19 people finished this mammoth event (including all six ladies). They experienced the highs and lows of extreme survival. They learned to appreciate the basic, essential values of warmth, food, community, and simply being alive. 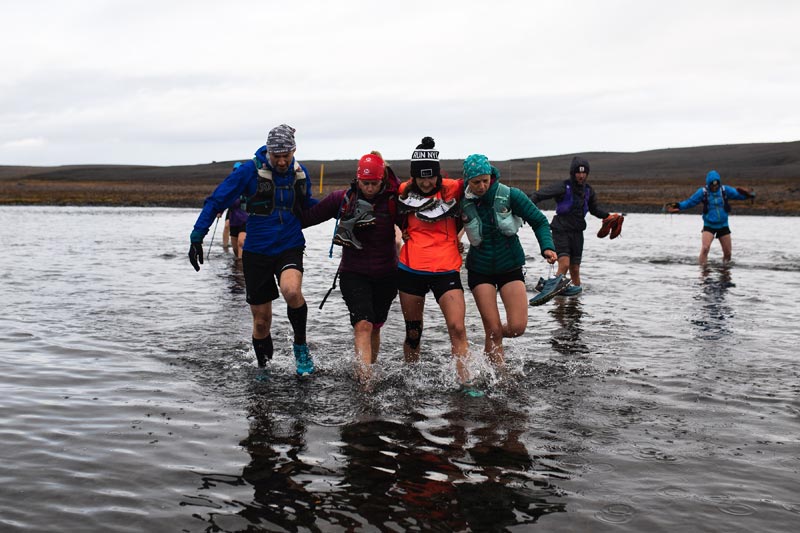 “We live in societies where we’re constantly striving for more – or worrying about the future, or the past. When you’re out in the middle of nowhere, you simply just want to survive, and so you pull together. In our societies, you can’t get all that sorted yourself. You need community and friends. You need your tribe. In these extreme conditions, our group became super tight; it became a nomadic, self-reliant community. It was magic.

We got to know each other intimately and I know 100%, that, when we’re 80, we’ll still be talking about this adventure – mainly because no words can ever describe what we went though. Just these 19 people know what happened in these 10 days. And that knowledge, understanding and bonding make us a tight family, filled with love and humour.”

More in this category: « Cycling a Continent: an Irishman's Adventure through Africa What's the French for surfing? Katy finds out in Biarritz »
back to top