What's the French for surfing? Katy finds out in Biarritz

It’s been a summer of mostly (work), running, a little climbing and a few trail races. But lately, I’ve been wondering else what I could achieve if I put as much effort into other activities as I do these.

Both learning to speak French and surfing have been a bit of a bane for me. People often assume I’m fluent having lived in France for several years, but that’s unfortunately not the case. Having worked slowly to improve my French over the years, I still have a very British muteness/lack of confidence when trying to speak it. And as for surfing…well, I’ve fantasised about being able to do it for years…but have largely failed to in reality, despite trips to Hossoger, Fuerteventura and even apparently the worlds most consistent wave location- the Mentawi islands, which were flat when I got there. Not to mention what I thought would be the final nail in the coffin - breaking my wrist whilst skateboarding in Moliets, in between surf lessons!

So in order to get over my mental block with both, I decided rather than my usual autumn escape to Greece for climbing, I’d put my efforts into a combined surfing and French week in Biarritz - the French capital of surf located on the Atlantic coast. And it’s not far from the mountains after all… just incase I get withdrawal symptoms. 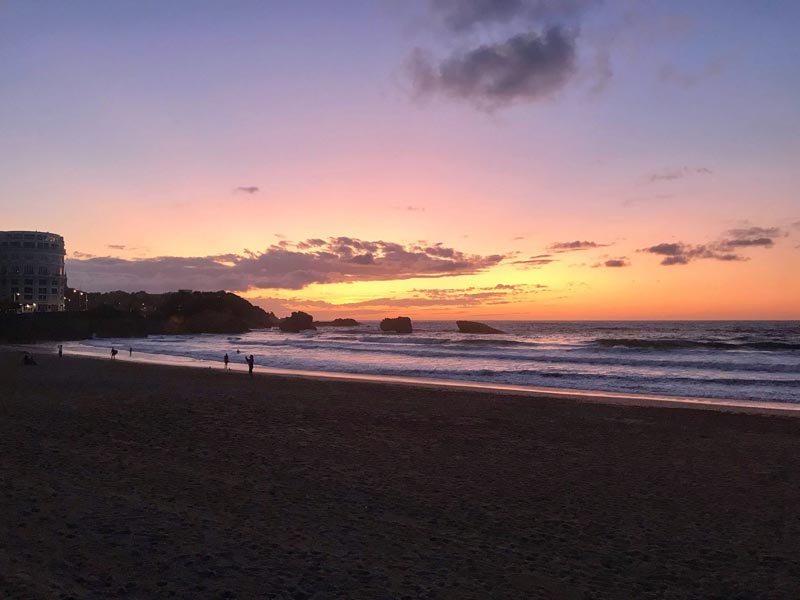 And there’s nothing better than testing your body (and mind) in a different way to brush off the cobwebs and give the tired old running legs a proper chance to rest…. Plus a chance to speak French away from people who know me, which I always find inhibiting, seemed to be the perfect solution.

At France Langue Biarritz you get 20 hours of French lessons per week, spread out over the mornings, then surfing in any of the nearby beaches in the afternoon or early evening, depending on the weather.

The school, based a beautiful house typical of the Basque Country dating from 1850, is just ten minutes walking distance from the world-famous surf spot at the Côte des Basques beach and, 5 minutes’ walk from markets, restaurants, cafés and boutiques in the lively Halles district – perfect if you are a bit of a ‘ sports gourmand’ like myself.

Despite its small size, Biarritz has a strong cultural identity, being part of the pays Basque - and the school offers chances to explore this, from guided tours to trips to neighbouring areas, white water rafting, to trying out the local sport, Basque Pelota, which is played with a very hard ball and either a racket or a basket to catch the ball.

Classes started at 9am - which got tougher and tougher as the week went on as I found that surfing completely drained me - in a good way!

On day one I’m welcomed to the school and given a quick test of my speaking level, before taken on a little tour of the town. Then straight into class with a range of people off different ages and nationalities. Through quizzes, videos and exercises our skills of speaking, reading, writing and listening were built on, as well as improving our vocabulary and grammar, without too much focus on knowing our conjugations - it was more about getting us talking. 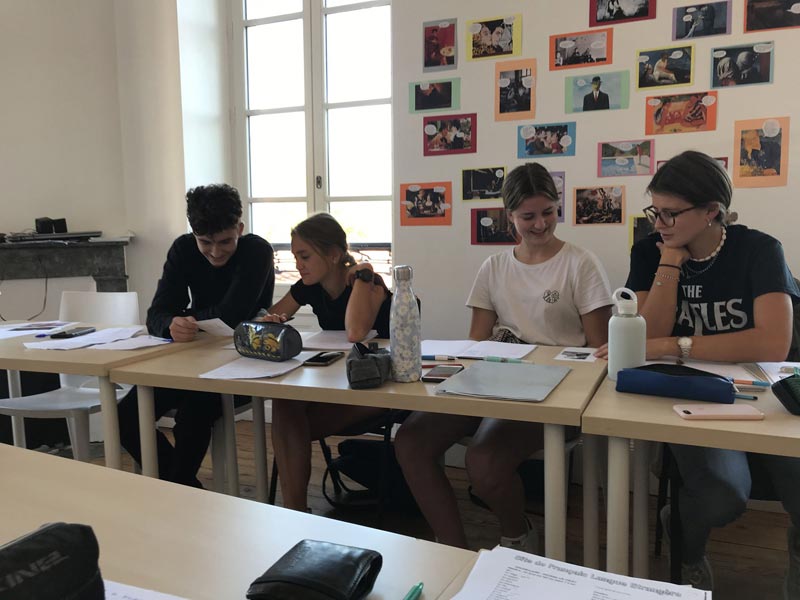 Our surf lessons happened at anytime from 5pm to 2 pm, for about 2 hours in the water, so enough time for lunch at the market or one of local basque restaurants not far away - or of course - a nap!

September proved to be a great time to go as the weather was still pleasant with the ocean not too cold. Heading for the beach the most suitable waves for ‘false’ beginners, we are collected from the school and driven to the Place de a Milady, about ten minutes away, and given our shorty wet suits, along with our foam surf boards before heading to warm up on the beach. 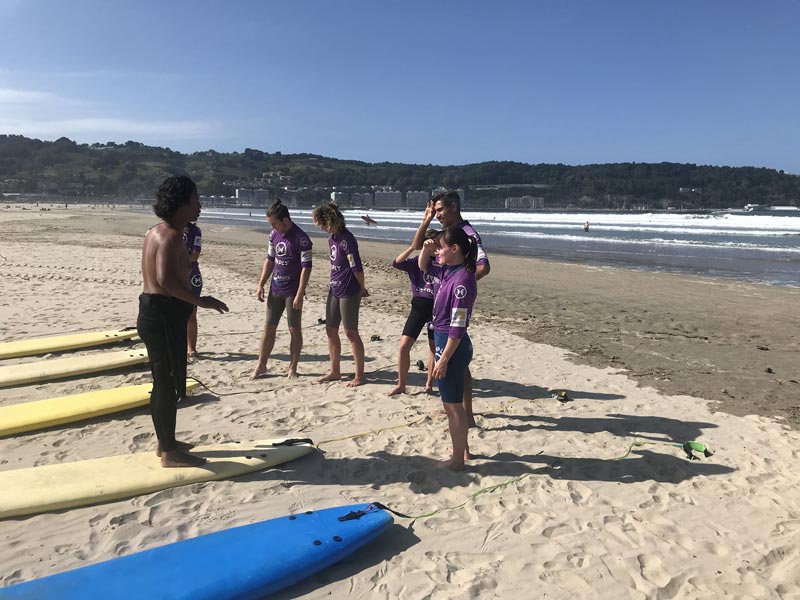 On day one the white water waves were frothy and fairly regular, without being choppy with too much backwash. After some exercises and instruction given in franglais, I just headed straight in hoping to remember what I’d learnt in holidays gone by. To my utter shock, I stood up second go- and did it again, and again, which goes to show that having the right conditions is the key. If the waves are not there- or are too big, then forget it- so learning to select the right beach is important… and the feeling of the power of the waves lifting you and its energy carrying you along is really quite addictive. I could see that i was now going to be hooked on this again!

But I was worried it was just a fluke – I did have a super wide board that probably even an elephant could have balanced on after all. But as the days of surfing went by I became more and more consistent, with just a little bit of knee to help me from time to time.

On day 4 and 5 we headed off to Hendaye, not far from the Spanish boarder. It almost seemed like it was man made because of its wide sandy beach and regular waves that weren’t too big…

On the final day I was even trying to steer the board- or planche. It wasn’t quite like snowboarding as the weight transfer is different, but you need to point where you want to go and apply pressure so the board will follow. 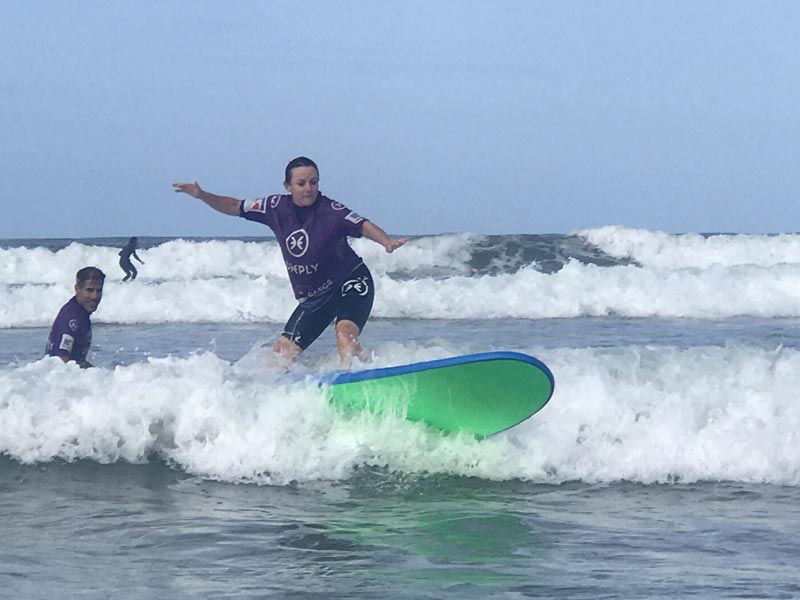 By the end of the session I was even trying to catch a green wave ( vague verte), with the help of he instructor lining me up and shouting allez allez when it was time to be brave and stand..

Surfing- like skiing – is a sport you really need to ‘ live’ if you want to get good at it. A week here and there will only move you two steps forward and one back…. much like trying to speak french really.

It was also good to do a sport lesson in French - although when any panic set in we’d revert to English – because along with the physical demonstration of what you have to do, you can make sense of the language and follow what is going on.

If only I’d done all my skiing lessons in French, I thought, given the amount of time I’ve spent on them, I’d be fluent by now!

email: This email address is being protected from spambots. You need JavaScript enabled to view it.

More in this category: « The Great Norse Run - 19 people run the first ever multi-marathon across Iceland Return to the Swiss Via Alpina »
back to top