Ed Jackson, Berghaus ambassador and a quadriplegic former professional rugby player, has revealed details of his plan to walk the Pennine Way in August and raise funds for two spinal injury charities.

In ‘Walk The Spine’, Ed, who broke his neck in 2017, will tackle England’s oldest national trail from north to south and aims to complete the 268 miles in 16 days, faster than most able-bodied hikers. The project will raise money for the Millimetres to Mountains Foundation and Wings For Life and is being supported by Berghaus, which has equipped Ed with some of its latest specialist kit, along with expert advice to help him prepare for a multi-day hike.

Starting in Kirk Yetholm on Saturday 15 August, Ed Jackson will head south along the Pennine Way, aiming to complete an average of around 17 miles a day, a hugely challenging task given his disability. Through Walk The Spine, Ed is keen to encourage others to venture outside and benefit from the physical and psychological benefits that getting active outdoors presents. With help from Ordnance Survey and its #GetOutside campaign, his progress will be tracked in real time via GPS on the M2M website.

Members of the public will be encouraged to join Ed virtually, picking one or more legs of the route and covering the equivalent distance wherever they choose, ideally raising money for charity in the process. Participants will be asked to record and share the route that they cover on social media using #walkthespine. The data will be collated and the efforts combined into a grand total of distance walked by all involved.

During Walk The Spine, Ed Jackson will be fundraising equally for M2M and Wings For Life, a research foundation dedicated to finding a cure for spinal cord injuries for which he is an ambassador. Anyone who walks a virtual leg will be able to join Ed's team on JustGiving if they wish to support his chosen charities, but the overarching aim of Walk The Spine is to get people outdoors and those taking part are welcome to use the event to support their own good causes too.

Ed Jackson comments: “The COVID-19 pandemic has shone a bright light on the importance of looking after one’s mental and physical health and Walk The Spine offers a prime opportunity to get outdoors as a community -  wherever you are - in the name of charity and wellbeing. I’ve been truly humbled by the support Berghaus have shown me since the accident. Not only have the team there helped me achieve my dreams of getting back to the great outdoors, but they’re playing a big part in my vision to inspire others to do the same. It’s an iconic British brand with a massive heart and one I'm extremely proud to be associated with. I’m also very grateful to Ordnance Survey for agreeing to track my progress and help everyone else to follow me and get involved themselves.” 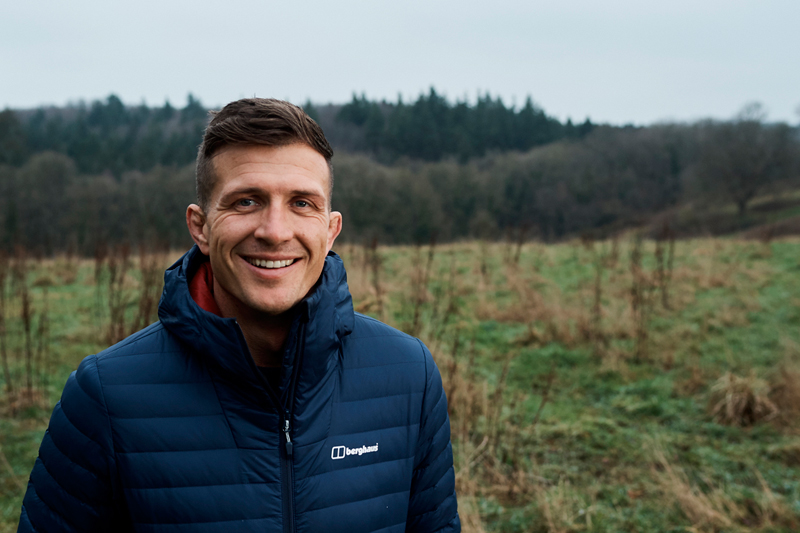 In 2017, Ed Jackson suffered a serious spinal cord injury and was told that not only was his rugby career over, but it was likely he would never walk again. After nearly a year in a wheelchair and despite still being physically affected by his injury, Jackson now regularly climbs mountains and undertakes other physical challenges to inspire others and support the Millimetres to Mountains Foundation (M2M), which he set up to help others who face similar to him to get active again in the outdoors. Walk The Spine is the latest in a series of fundraising initiatives that Ed has led. M2M has already organised successful fundraising trips to the Alps and Himalayas, raising £60,000 towards the construction of a new spinal unit in Chitwan, Nepal, and, during lockdown, Ed raised over £50,000 for Wings For Life and the NHS by climbing the equivalent of the height of Everest on his parents’ staircase.

To find out more and get involved in Walk The Spine visit www.millimetres2mountains.org.

More in this category: « Snugpak UK Made Face Covers Now Available Elliot Brown and Land Rover partner on new watch to support round GB rowing challenge »
back to top

MyOutdoors @MyOutdoors
RT @chrisjlines: Out and about on the Wainwrights with three ultra-running legends - Sabrina Verjee, Steve Birkinshaw and Paul Tierney. We'…