The mountaineering world has been shattered today with the news that Swiss mountaineer Ueli Steck has died in a climbing accident in the Himalayas.

The news broke early on Sunday (30th April) that Steck had fallen from near Camp 2 on Mount Everest while climbing alone. His body was identified and recovered by 6 climbers from the foot of the Nupse Face and has been is presently en-route to Kathmandu. An official statement on Ueli's Facebook says: "Ueli Steck was killed while trying to climb Mount Everest and the Lhotse. His family has learned of his death today. The exact circumstances are currently unknown. The family is infinitely sad and asks the media builders to refrain from speculation about the circumstances of his death due to respect for Ueli.

As soon as there are reliable findings on the causes of Uelis Steck's death, the media will be informed. The family asks the media for understanding that they will not provide any further information at the time." 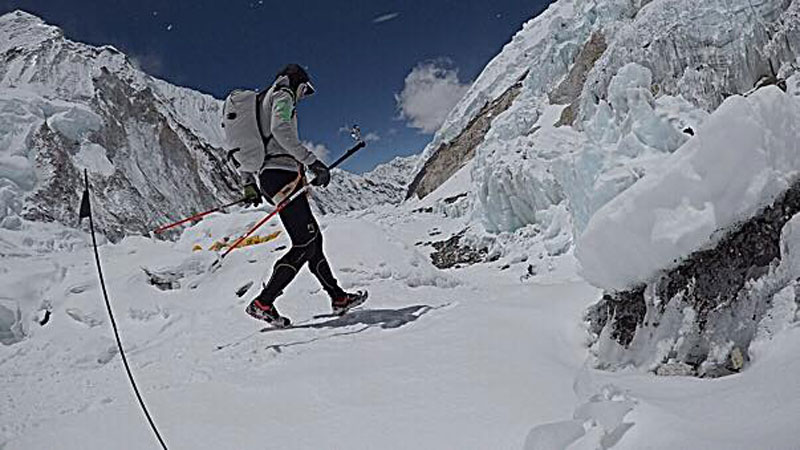 Earlier this month, Steck announced that he was training for a new record: to climb Everest – descending via the South Col and re-ascending via the Lhotse – without supplemental oxygen.

In social media posts in the days before the accident Steck said  “Quick day from base camp up to 7,000 m and back. I love it, it’s such a great place here. I still believe in active acclimatisation. This is way more effective than spending nights up in the altitude.”

Ueli Steck was renowned for his solo speed ascents from the Alps to the Himalayas, with his 2010 film The Swiss Machine bringing him to the attention of the world and providing a nicname that stuck.

Born in 1976 in Langnau, in the Bernese Emmental Steck completed his first solo ascent of the Eiger north face in 10 hours in 2001 and by 2003 had beaten the record of four hours and 30 minutes. In February 2008, Steck set a new solo climbing record on the Eiger North Face by summiting in 2 hours, 47 minutes and after losing the record to compatriot Dani Arnold again brought the time down in 2015 to 2 hours 22 minutes 50 seconds.

On May 18, 2012 Ueli Steck summited Mount Everest for the first time, without supplementary oxygen In April 2013 he was famously involved in a fight at Everest base camp along with Simone Moro and Jon Griffith

Steck set a speed record  with the first solo ascent of the South face of Annapurna in just 28 hours bringing him the second of two Piolet d'Or awards following his 2009 award for his North Face Trilogy speed records in the Alps and for his 2008 first ascent of Teng Kang Poche's northwest face, with Simon Anthamatten.

In 2015, Steck completed a "human powered" traverse of all 82 4000m peaks in the Alps in 62 days, combining running, cycling and speed climbing.

Steck along with Tenzing (Tenji) Sherpa were attempting attempt to climb Mt Everest by the notorious West Ridge/Hornbein Couloir with a plan to make a descent to the South Col before switching their attention to Lhotse. Speaking in 2012 before his first Mt Everest summit he said “I never risk my life. I’m a control freak. When I did the solo speed ascent of the Eiger North Face, I was probably safer than those parties roped together – I know that I am not going to fall. It is like walking down the stairs. You never think about falling when you just put one foot in front of the other. However, you have to be honest with yourself – you can only do this for a certain period of your life.”

Asked about the risk prior to the Everest-Lhotse expedition, including an overnight camp in the “death zone”, Steck said: “When I’m on Everest I can stop at any point. The risk is therefore quite small. For me it’s primarily a physical project. Either I get through or I don’t have the strength.” Of course I want to climb Everest and Lhotse. But that’s a very high goal. Failure for me would be to die and not come home.”

More in this category: « Appeal launched as Andy Parkin's Chamonix studio is destroyed by fire The global alpine community reunites in Chamonix for Arc’teryx Alpine Academy: 4-7 July, 2019 »
back to top