Hands on with Fjallraven’s 2016 tent range in the Cairngorms

I’ve always had a fascination about tents. From the outside they appear basic and  simple. A few poles, material and lots of string. What more is there to know? When I was given a last minute opportunity to fly to the Cairngorm to get hands on with Fjallraven’s 2016 range, I jumped at the chance. Literally! 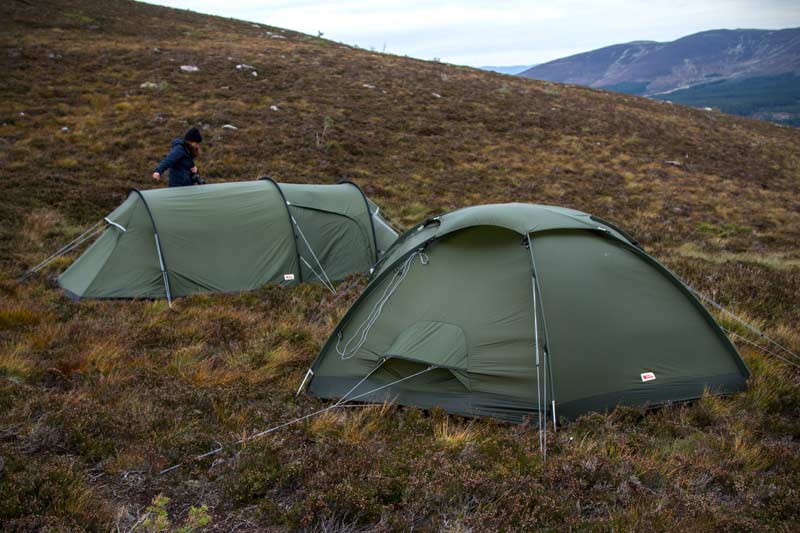 For many, you may associate Fjallraven with retro/traditional/different (chose as applicable) outdoor clothing and packs, which break away from the trend of ultra light materials. Instead they combine longevity, durability and well thought out details. However, Fjallraven’s first products were frame backpacks and tents. For 2016 they are re-launching their tent range, with 16 new tents and this is why I found myself flying into Inverness in a twin prop airplane.

After setting off on foot near Loch Morlich, we steadily made our way towards the Northern Corries. With trails lined with Scott’s Pine and Silver Birch, crisp unpolluted air and the scents of sap and foliage coated in morning dew greeted our nostrils. I may not live in London, having the fortune of living in a relatively rural location, but the difference in air quality was stark. Man and his machine were not present. Though a managed area, moving five minutes from the road felt isolated, wild and free. 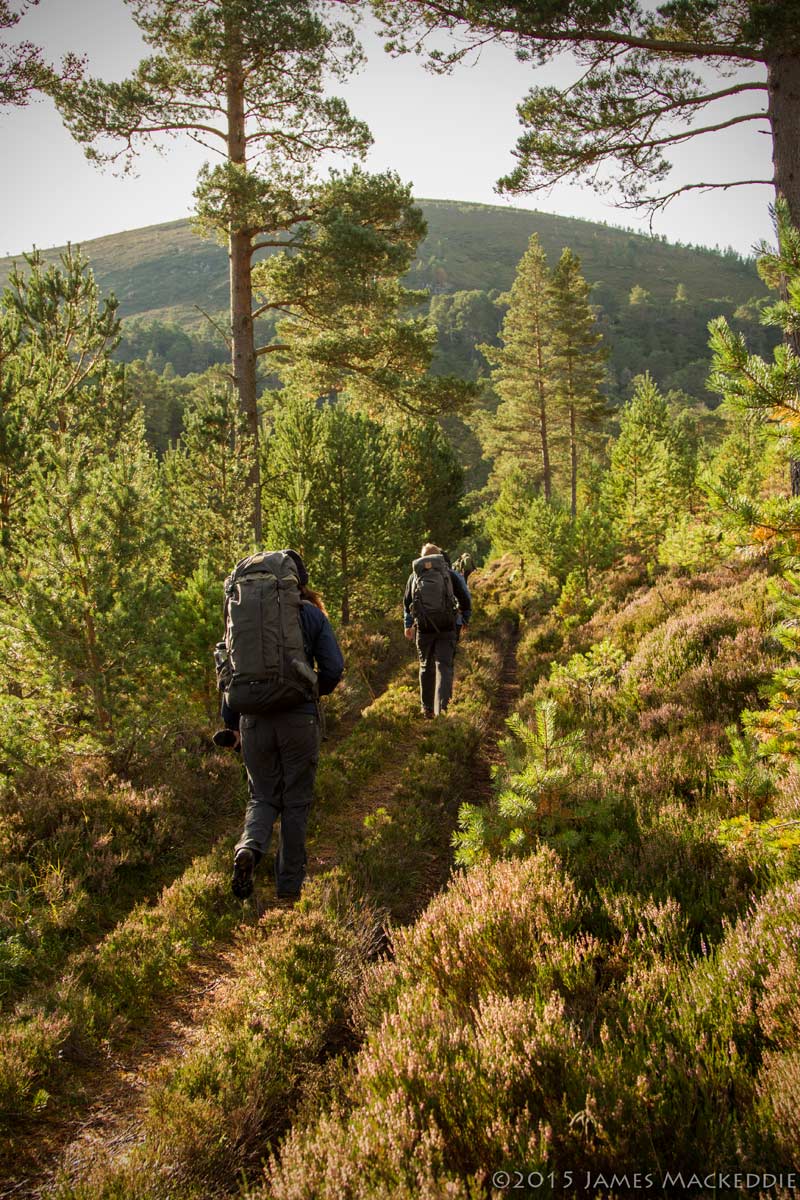 Meandering through trails, we eventually broke through the canopy and onto the expanses of the mountains. The plan wasn’t to go bag summits, but provide the group of varying experiences a night on the hill, whilst we got to see the range, hear from Svante Björkroth from Fjallraven and above all else have a good time. 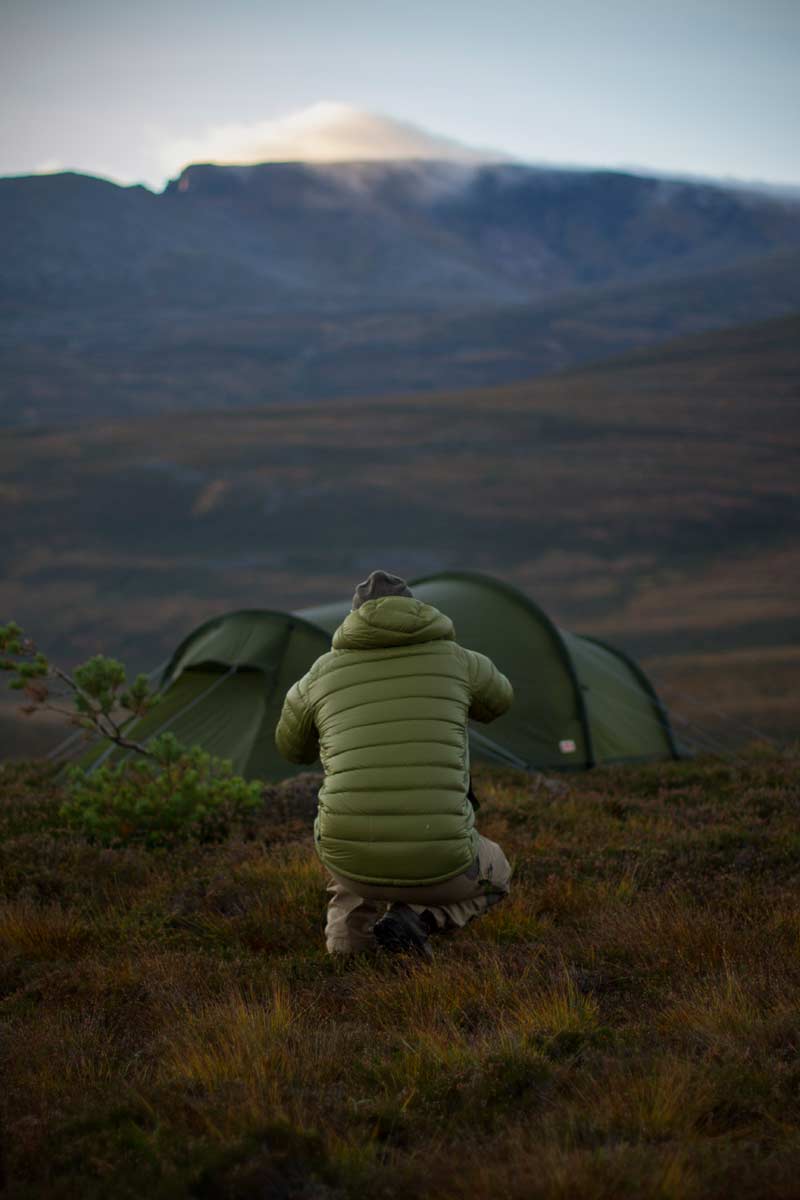 The team from Backcountry Survival, along with Ross from Rosker had made camp the previous night, hauling tents, stoves and gas up the hill….. this doesn’t do my credibility as a hardcore outdoor machine any favours!

Picking up the smallest tent I could lay my hands on (being a runner I have an obsession with lightweight kit) I made my way up the adjacent hill. We had been told to space ourselves out and jokingly Ross had mentioned going up the hill. Not one to mince people’s words I duly set on lugging my kit to the top, quickly finding out it was more of a slog than I anticipated. 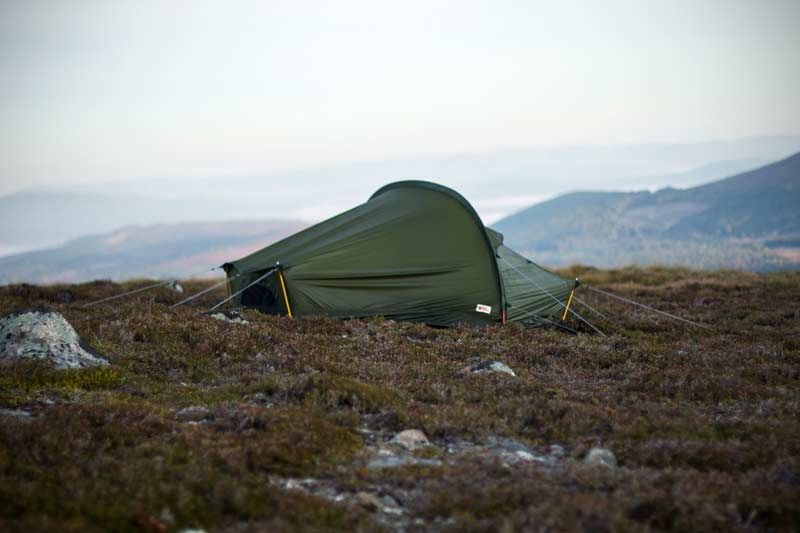 However on top the views were stunning, Aviemore was in the distance and I was treated to an un-spoilt 360 degree panorama. They say it pays to
be winner on hill sessions and this time it did! 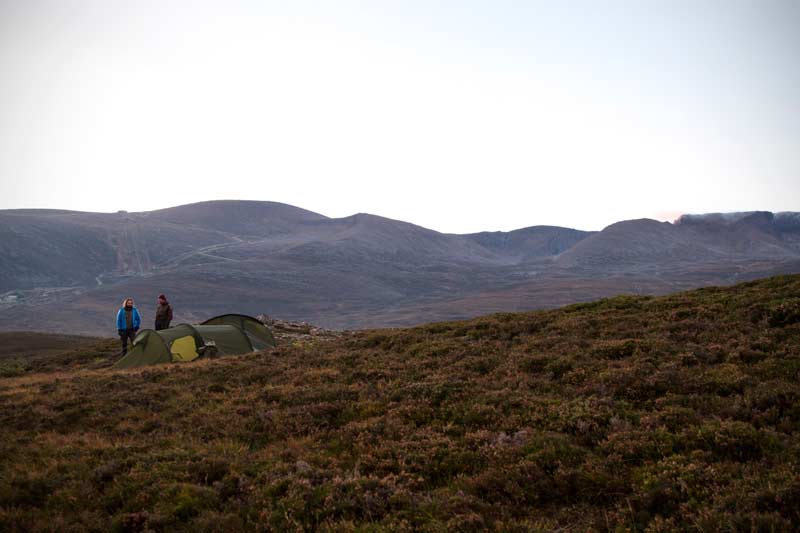 Now the tent, I had in my hands Fjallraven’s new Abisko Lite 1, a purpose built one man tent. Now I didn’t have my scales with me (perhaps an investment for future trips) but I wasn’t carrying a lead balloon.

Fly and ground sheet out, poles and pegs weighing all down as strengthening winds tried in vein to remove my shelter from my grasp. Once I had orientated myself with the tent, pitching was simple. One main pole, followed by two stubby poles at either end to provide a head and foot box. 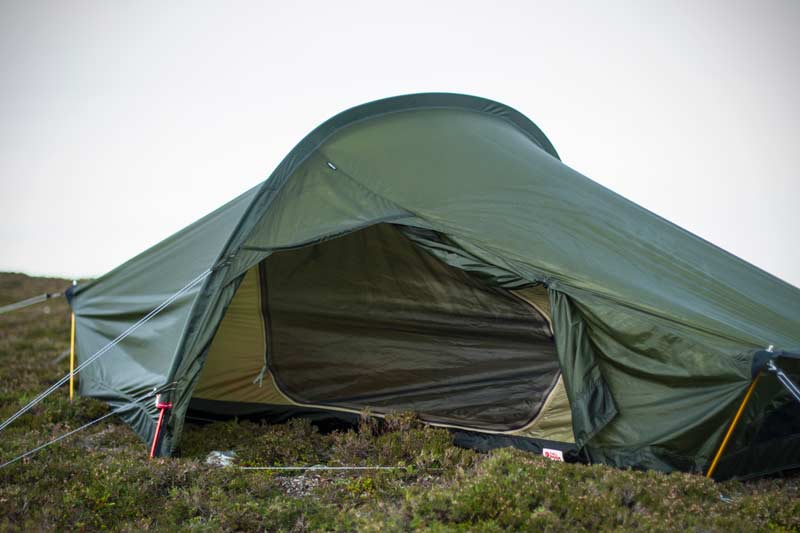 Once the main anchor points are pegged down, it is simply a matter of tensioning guys to give the Abisko Lite 1 structure.  It is not a free standing tent, having one main pole, so its best to spend a few minutes getting the tent tensioned properly and walking away before making your final tweaks. 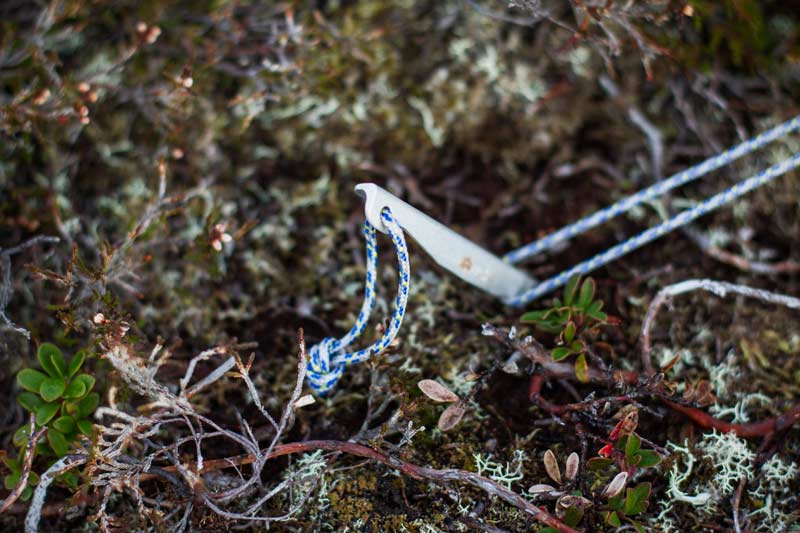 Now stood up, it is surprisingly strong and offers a lot of room. Internally I had ample room for a 50 litre rucksack and footwear in the porch. The living compartment had plenty of room for small kit and being only 5ft 7”, I could have got away with a small day pack at my feet. The twin poles at either end made a genuine difference. I could stick my gargantuan head at the far end, without a face full of fly sheet, which also bodes well for when it rains and you gingerly move around, determined not to touch the fly and allow water to cascade in. 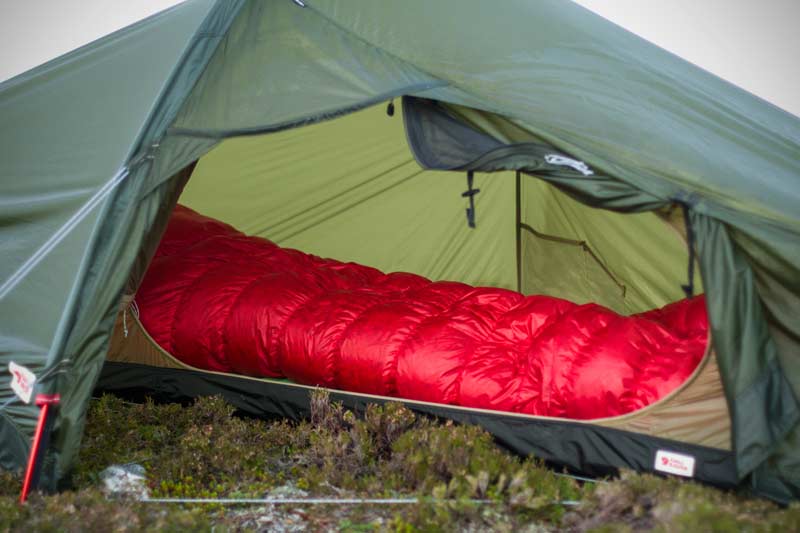 For mountain marathoners who are on good terms and lean machines, you could spoon the night way in a cramped restless embrace, though if you’re heading on a multi day hike…. Take a two man or one each! It is a one man, and as a one man, I could live comfortably in one for an extended period.

Of course one night is not enough to form a comprehensive review of any tent and we look forward to a full test in the new year. 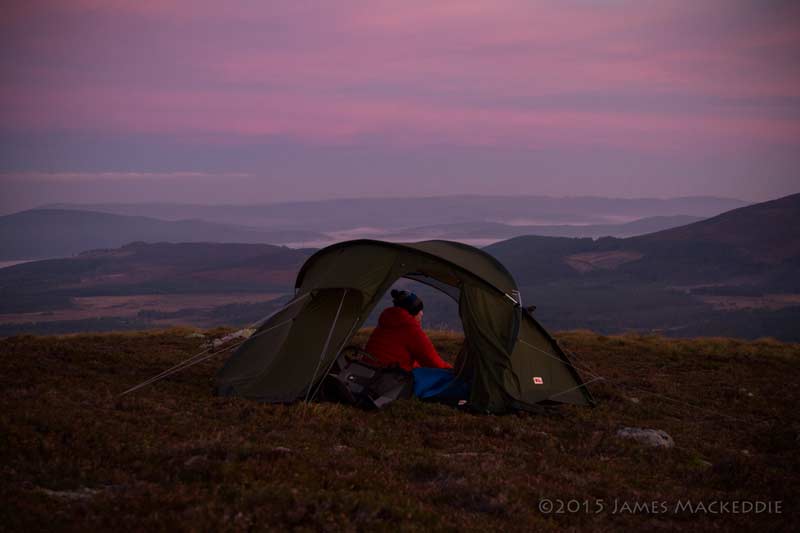 Having looked on the website, you may see that Fjallraven already have a range of tents and some of the names sound very similar. Well they are, but designers have gone to new levels of detail to improve upon every feature, looking at what works practically, rather than making sure it costs a certain amount for retail.

First of all there are two families, Keb and Abisko. Keb is the most technical, designed for extended us in tricky and demanding terrain, whereas Abisko is are lightweight, aimed at summer trekking, offering maximum ventilation. Metal zips are also lockable, to keep the weather and more importantly your tent buddy out when they have eaten your last biscuit!

The stand out feature has to be there are no taped seams. Instead the seams use a thread which expands when wet, sealing the two material sheets, making the tent watertight. The advantage of this is longevity. The greatest amount of damage to a tent is caused by UV, and the seams are a weak point. Without seam tape, the lifespan of the tent is increased. Now that’s clever! 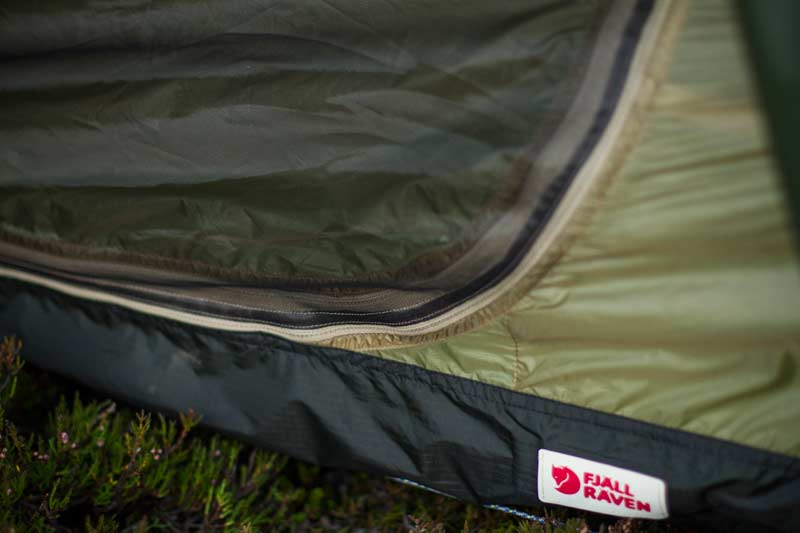 The flysheets Nylon has 4 layers of silicone coating, 2 either side, using a 20D Denier on top and a 40D at the bottom. The pole channels also have a silicone lined coating to aid getting the poles in and out effortlessly. Nothing worse than snagging your pole on a loose flap!

DAC poles are feather light, with thicker connection points, which provides extra strength. The pegs have a knurl near the top to stick into the ground and hold. The V shape provides extra strength and they all have a small piece of dynema attached to aid easy removal. Saves hooking pegs or pulling the exposed inch with your bare hands. 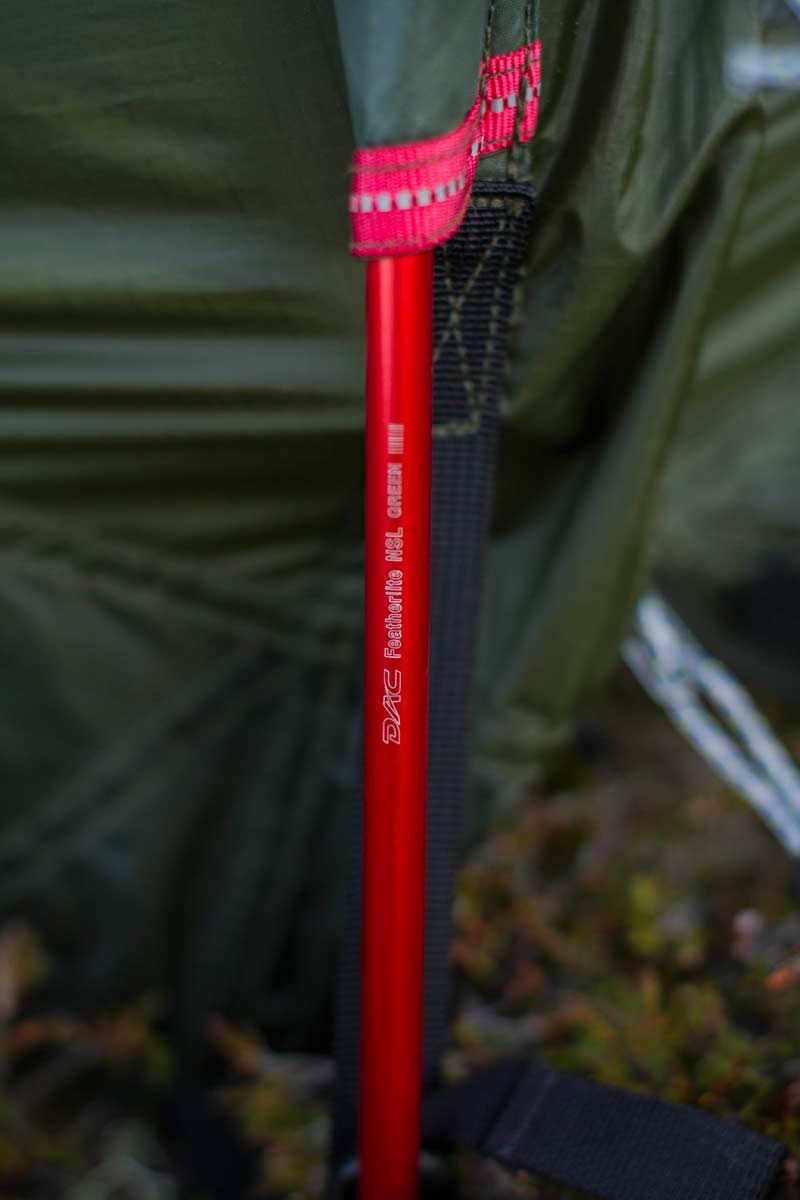 Dynema guy lines have a breaking strength of 160kg, so you can afford to repeatedly trip over them in the dark, provided you don’t lose your pegs. However, they are reflective, so you have a chance to avoid them. 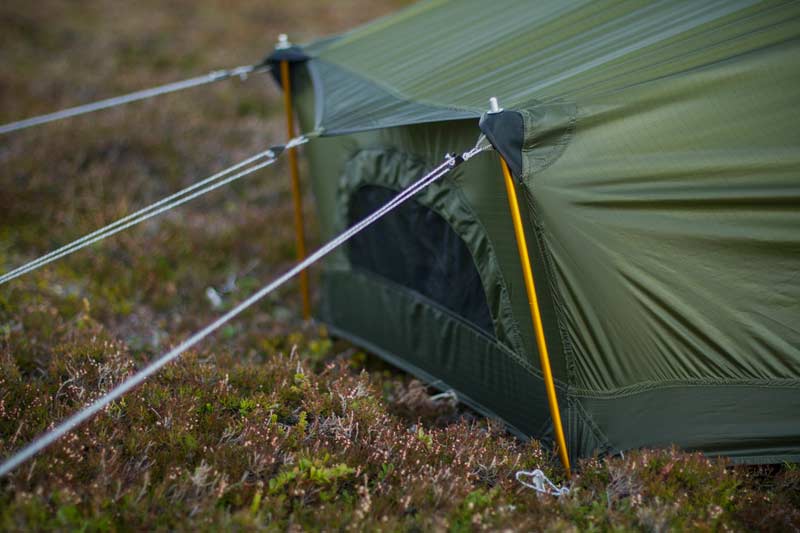 It features all of the above and more. The fly uses a combination of 40 and 70D Denier, with reinforcements at stress point and along the bath tub. The dynema guy lines have a breaking weight of 200kg, so unless you have a herd of elephants stampeding through the Yorkshire Dales, they should stay in place. The DAC poles are thicker than the Abiskos and you have the option of doubling up the poles in winter for extra strength. At the attachment points on the tent, there are two receiving ends for poles, giving you the flexibility to add to it. This is particularly handy when going above the snow line, giving the weight a good layer of snow puts on a tent’s structure. Extra poles are sold separately currently.

The Keb range also comes with longer pegs than standard, each with a length of dynema to aid pulling out of the ground. All adjustment points are glove friendly,

Oh. There is one more thing. There's a Polar range to come, for those of you who like strapping 80kg of sled to your back and pulling it across ice. If it didn’t cost £1.5 million to walk to the South Pole and back (ask Ben Saunders) I’d be waving my hands wildly to have a go.

Fjallraven have created interesting tents and they have greater heritage than most (I bet you didn’t know that).  Each feature has been thoroughly designed, then redesigned to make sure there are no compromises and that as clever as these features may sound, they ultimately work in real world scenarios. 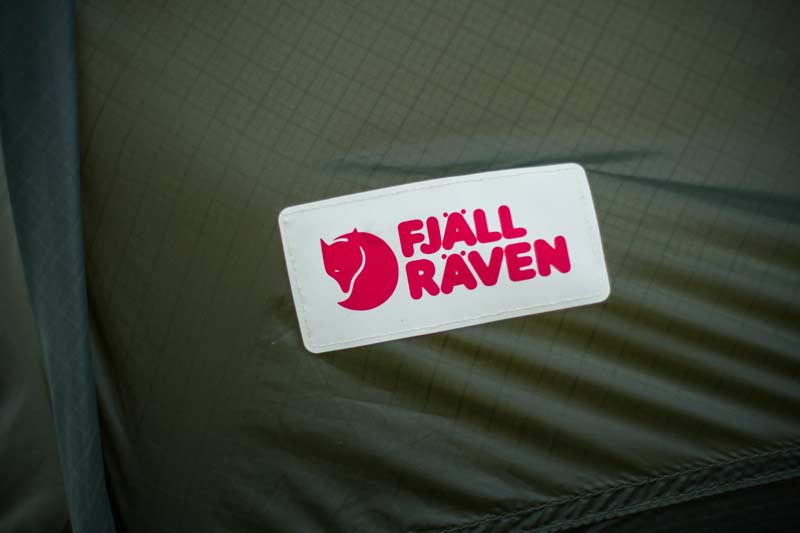 Look out for more reviews coming in the spring.

More in this category: « The MyOutdoors Guide to Chamonix between the seasons 6 tips for making your tent last longer »
back to top