Dufton Pike & Murton Pike are two prominent outliers clearly seen from the A66 en route to the Lakes.

They are both little gems & what they lack in height, they make up for in quality, interesting terrain, scenery & nearby delightful villages. Both can be done in a day parking in Dufton or Murton, or as two separate mini mountains. I often go up Dufton Pike, which along with Roseberry Topping & Castle Crag are some of my favourite small hills. I had noticed the Pikes for years travelling along the A66 to the Lakes and I first visited Dufton in 1991, but it was not until 2006 , after finishing all 14 x 8000m peaks in the Himalaya that I 'discovered' these two endearing Fells as well as High Cup Nick. 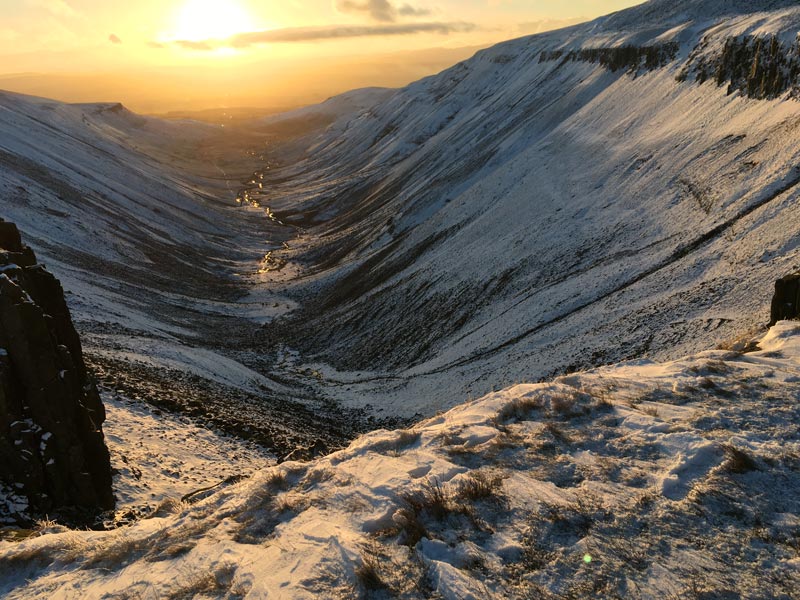 Geologically Dufton & Murton Pike are volcanic & metamorphic rock as opposed to the sedimentary rock of the North Pennines, which is limestone, sandstone & gritstone. High Cup Nick has a dramatic black cliffs of Whin Sill, an igneous intrusion of Dolerite. The same intrusion that forms High Force on the River Tees & the provides the natural raised core that Hadrians Wall is built on in its central part.

The Pikes look like mini mountains, not too far from a road, and probably get underestimated. If an accident happens it is still a Mountain Rescue Team scenario. A call out will be necessary, as although within sight of a village it is a bit arduous for an ambulance crew to access. 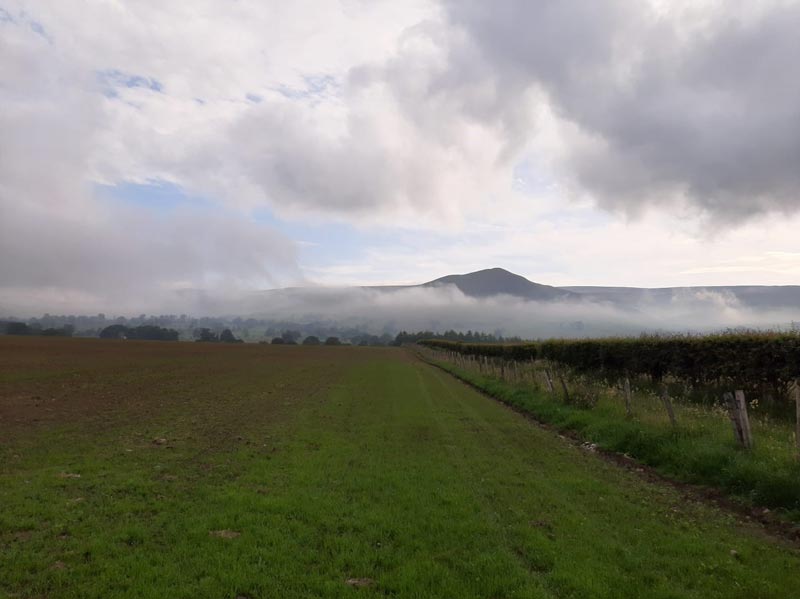 The car park in Dufton is a good starting point, although due to its popularity it can get busy, but you can often find roadside parking in the village. Park responsibly as big farm vehicles regularly need to pass. It is possible to arrive by train in Appleby on the Settle to Carlisle Line leaving a pleasant four mile walk to Dufton. For accommodation there is a YHA in Dufton, a small campsite, and a selection of B&Bs. Many walkers know this village from doing the Pennine Way. Opposite the car park & toilets is a bus shelter, which in Spring often has Swallows nests inside.
Dufton Pike is the obvious pointy peak; it's difficult to resist taking a photo from the village green with its old fountain, it's such a good looking 'mini mountain'. The steep slope to the top is on Access Land with no public footpath, although there is an obvious path up the broad ridge worn on the ground but It's always a good idea to take a local OS map to check your route, even though it is obvious where to go. 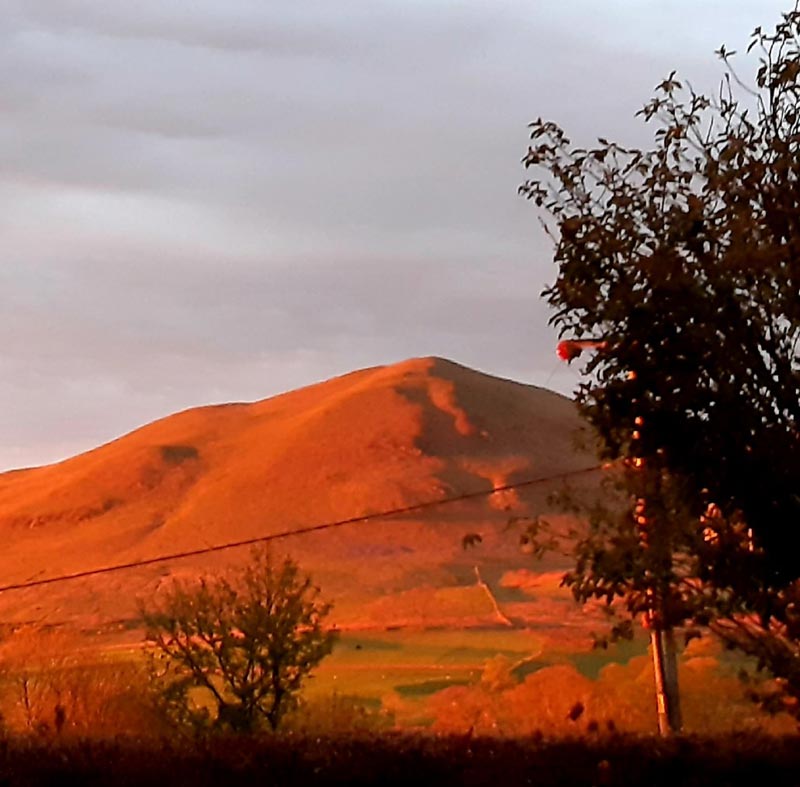 Dufton Pike Sunset
The shortest route is to turn right, follow the curve round to the left on the road and then head straight ahead up the farm track to Pusgil House. An alternative, interesting, route is to turn left, walk out of the village along the Pennine Way route, and after leaving the tarmac bear right on a delightful path behind Dufton village which leads back to Pusgil Lane.
Carry on beyond Pusgil to the access gate leading to the open Fell & Dufton Pike. This is a straightforward, steepening, grassy climb which ends abruptly at the flat topped summit. I've often wondered if it has been flattened by humans as it is level & a great vantage point. There are fabulous views to Great Dun Fell, Cross Fell, Blencathra & the Lake District Fells & SW to Mallerstang & Wild Boar Fell. From here you can return by the same route or continue down the opposite ridge, turn right at the bottom & skirt underneath Dufton Pike to return past Pusgil House.  A fast, fit, fell runner may run up & down 'The Pike' in less than an hour. If you wish to enjoy the experience, take photos & maybe a picnic I would allow 2 - 4 hours.
Murton Pike is a little higher & accessed from the carpark in Murton. This area is also access land although there is a public footpath up Murton Pike, and the route is obvious. Again there are magnificent views. 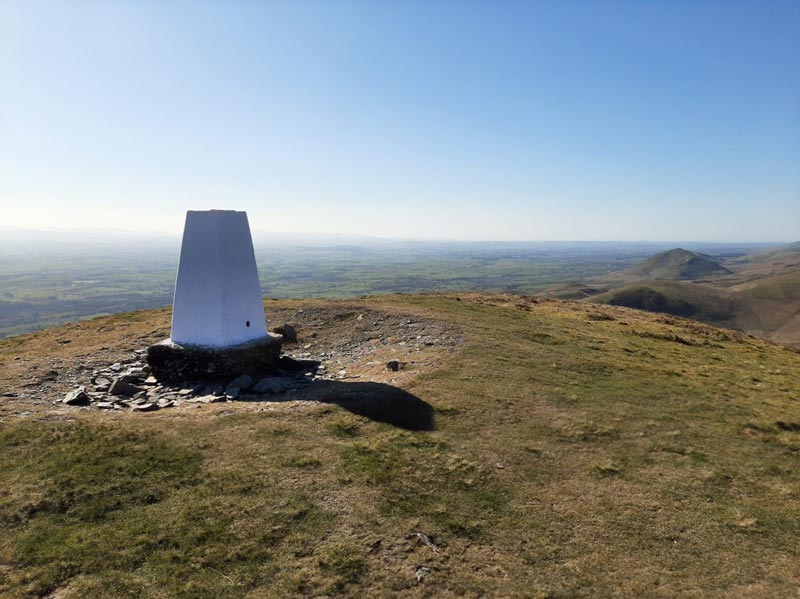 Interestingly the next outlier Roman Fell is the same height as Murton Fell. Roman Fell is on MOD land & only possible to access & climb on a few days a year when there is no live firing. Another hidden gem worth visit while you are in the area, or after returning from the Pike is Dufton Ghyll Wood. Managed by the Woodland Trust, this is an idyllic ancient woodland, with mostly deciduous trees & open access. There are imposing outcrops & quarry faces of St Bees Sandstone. These vertical rock faces are lichen & moss covered & too overgrown & friable for rock climbing. In winter huge sword of damocles like icicles can dangle down. It is a Red Sqirrel sanctuary & if you are lucky you may see one. If you see any Greys please report them. I often bimble through, or just sit, contemplate, listen to birdsong & breeze & generally recharge by soul. At the end of winter the wood if full of Snowdrops & later a carpet of lucious Bluebells. 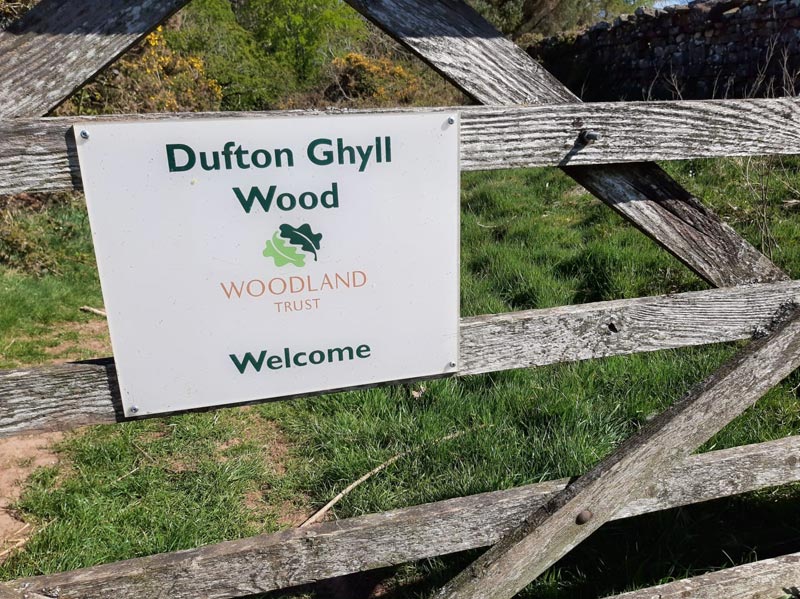 One interesting local phenomenon is the Helm Wind. This is the UKs only named wind. From Dufton to Gamblesby there are many good places to observe this phenomenon. A classic location is Dufton & just outside Dufton where you can look west along the Fellside to beyond Cross Fell. It is a fohn-like wind blowing from the NE that accelerates & roars down the hillside battering the trees, walls & buildings. If there is a Helm up, I would not recommend climbing Dufon Pike as the wind can be locally ferocious. Down in Appleby it will be calm, the Helm is very localised, often with a distinctive cloud cap on Cross Fell - The Helm & sometimes a bar cloud to the west with clear blue sky inbetween.

High Cup Nick has always been one of Britain's best kept secrets; a mini Grand Canyon. Pennine Way walkers and Wainwright afficionados will be aware of it along with geographers & geologists. Recently it has become more well known & popular through TV & magazine coverage and on a fine weekend the small carpark and toilet block in Dufton can become full with cars & coaches parked on the roadside in the village. 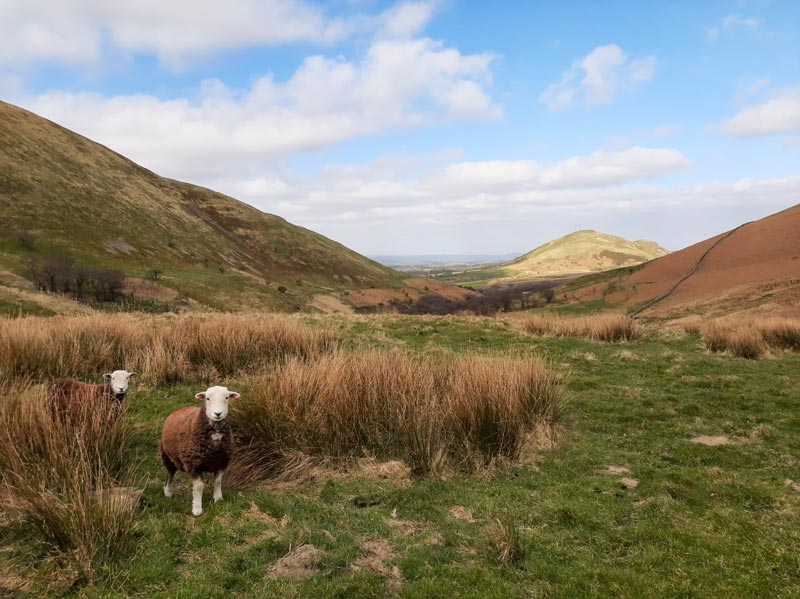 Knock Pike from back of Dufton

Dufton has an accessible 'hinterland' of around an hours drive or less; from Darlington & Teesside in the east with easy access along the A66, to Carlisle and the north-west with easy access with M6 & A66. Dufton also attracts its fair share of cyclists with plenty of bridleways for offroad/mountain bikers;  High Cup Nick proves a popular goal. The lanes around this area are also great for cycling with expansive views of the North Pennines & Eden Valley. and the option of a challenging ride to Hartside and Alston. It's a quiet, lesser known, spot in the national consciousness but for those who know its secrets Dufton and High Cup Nick is a real gem with unforgettable views and iconic landscapes.

More in this category: « James Forrest sets "self-supported" hiking record for Wainwright's round
back to top