Statement, by Ed Douglas, tells the remarkable story of the highly respected climber Ben Moon. It is the result of meticulous research by Ed who spent many hours discussing climbing and life with Ben, and talking to Ben's family and friends. Statement describes how, at a young age, Ben found climbing, and how his love for the powerful emotions he experienced was instantaneous. At that time he thought nothing would ever match the strong feelings and sensations that movement and shape on rock gave him. 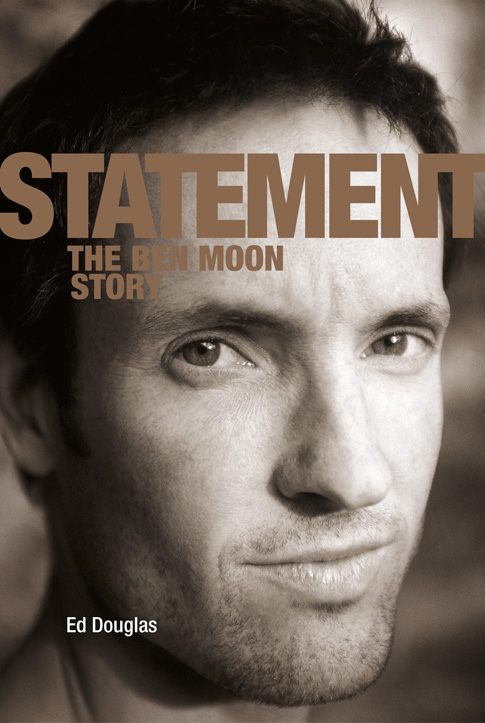 Ben was brought up in Kingston Upon Thames. His grandfather, Jack, shared his passion for climbing. He explained to Ben that the climbing of his day was all about being part of an enthusiastic group of all levels of climbing ability, and simply appreciating the joy of sharing the mountains. Ben loved Jack's tales of these pioneering days. Their private world of climbing dreams was like a rope that would always bind them together.

Ben's father, Jeremy, was an abstract painter and his mother, Beth, was a full-time mum. He had an elder brother, Rob, and a younger sister, Georgina. One day in November 1973 the family were informed that Jeremy had been involved in an accident on his motorbike and was recovering in Kingston Hospital. Beth and Jeremy's brother, David, quickly went to visit him but by the time they arrived at the hospital Jeremy was dead. Ben was left with 'fragments and ghosts of memories', and Beth was left with three young children to guide through life.

Ben attended Christ Hospital School where he pretty much conformed to what was expected of him, but he did help to form the band Bash Street Kids, whose lead singer was Jason Flemyng, later to star in Lock, Stock and Two Smoking Barrels, and Snatch. Ben loved groups like Crass and The Damned and modelled himself on Mark Wilson of The Mob. He grew dreadlocks, he looked a bit punkish and alternative but his thoughts were always channelled through rock rather than words. He took his O levels and recollects that as he did so, he received a letter from Jack telling him of the sad loss of two of Britain's finest climbers, Peter Boardman and Joe Tasker, on Everest. It was 1982.

Ed Douglas delights in cataloguing Ben's significant contribution to sport climbing in the 1980s. Sport climbing was a relatively new, intriguing form of movement which embraced the use of permanent anchors and even bolts for protection. The myths of climbing would suggest that it threatened to stifle traditional climbing but Ed reassures the reader that this was not true. The use of bolts did perhaps disturb some of the perceived climbing establishment but rocking the climbing establishment was what each generation of new climbers did! Ben used bolts on one of his first major routes called Statement of Youth. Some thought this name was a small rebellion but the route was actually named by Mark Pretty, and was a pun on the title of Vera Brittain's memoir, Testament of Youth.  Sport climbing was a revolution and climbers like Ben and Jerry Moffatt were impatient to discover what the human body could achieve when the spectre of fear was removed.

In Statement, Ed clearly pinpoints the keys to the stunning acceleration of the standards in this form of climbing. Ben had the greatest respect for some of his closest foreign rivals including Wolfgang Gullich, the Le Menestrel brothers and Jibe Tribout. At this time in his climbing development he felt he was always trying to catch up with these climbing greats. All climbing was moving towards being more professional and was losing its persona of being a 'counter cultural lifestyle'. The future was professionalism and sponsorship.

In France Ben created two new routes called Agincourt and Maginot Line and in 1990 he completed Hubble on Raven Tor, which at the time was the hardest sport climbing route in the world. It was given the grade 8c+ but is considered today to have been the first ever 9a route. Ben reflects,

"It is from climbing I draw my inspiration for life."

"It was the ultimate bench mark. It then gained a reputation over the years, it never became easier ..."

Ben never allowed himself to be satisfied with his achievements. He always looked for new training regimes and ways of improving the balance between power and endurance and ways to concentrate his motivation and focus. All these aspects of his life would enrich his ability to move on rock.

Around his thirtieth birthday Ben took time out from climbing to allow his battered body to recover, and when he came back he saw bouldering as his future. Bouldering was fast and gave immediate rewards and it was just what Ben was looking for. Bouldering was not better than sport climbing, it was just different. Bouldering was quality climbing without the hassle. In 2002 Ben started his second company which he simply called Moon, selling a range of equipment and T-shirts. Ben married his partner Jo and their daughter Sylvie was born in 2009.

Looking for another challenge Ben completed a bouldering project called Voyager. He then worked on making it more difficult and a few months after his fortieth birthday he made the first and only ascent of Voyager Sit Start. It was given a bouldering grade of 8B+ and is still one of the hardest routes in the UK.

Statement is an enthralling read, beautifully written by Ed Douglas. It very clearly describes Ben's relationship with sport climbing and bouldering, his ambition to paint abstract pictures on enticing rock and his ability to produce balletic, complex movement in order to fulfil his dreams. Ed's writing is empathetic and warm. He obviously has the greatest admiration for Ben and what he has achieved. The text is engaging and informative and reflects just how sport climbing and bouldering have influenced a whole generation of climbers. This book is not a light read but it is a very rewarding one. It is a fine testament to Ben and to Jerry Moffatt that even today the best climbers struggle to repeat their pioneering routes, and puzzling as to how so much was achieved during this remarkable period.

More in this category: Jon Griffith's Alpine Exposures reviewed »
back to top