A Welshman at Le Tour

I love the Tour de France but as a spectator sport road cycling is rubbish. On the television it looks amazing as the roads are lined with spectators waving flags, cheering on their favourite riders and taking selfies. Who can forget the scenes in Yorkshire last year as thousands attended the biggest free sporting event in the world but what you don’t see on the box is the real truth. 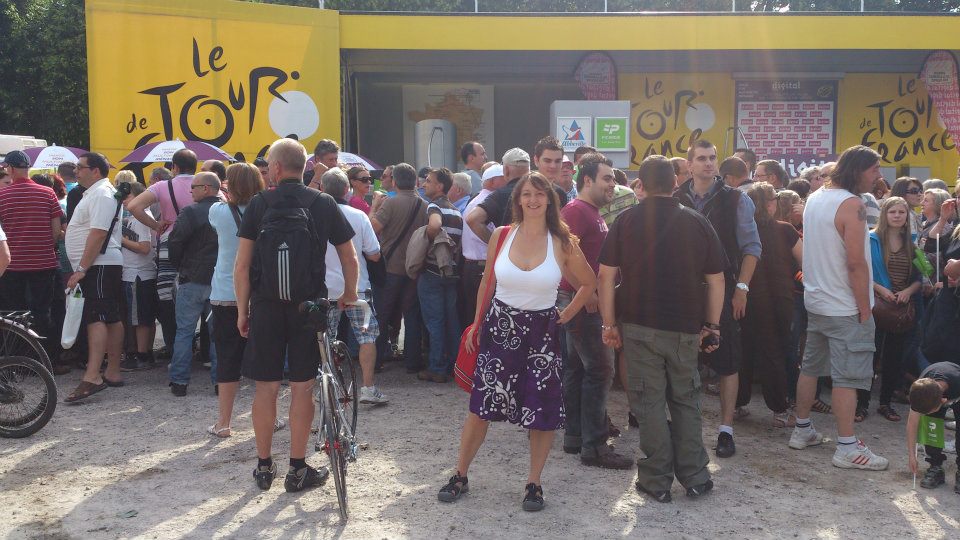 I went to France in 2012 to watch two stages of the race. Stage 4 Abbeville to Rouen and the following day Rouen to Saint Quentin. These were both listed as flat stages likely to end in sprints. I was very very excited on the journey and wanted to keep asking are we there yet even though I was driving.

2012 was the year that Mark Cavendish was riding for Sky and Bradley Wiggins was overwhelming favourite for the win. Cavendish was also sporting the rainbow stripes of world champion and was defending the green jersey for best sprinter he’d won the year before. It felt good to be a British cycling fan.

We arrived in the start town of Abbeville at about 7 in the morning, and unlike Britain we weren’t charged a small fortune to park, and walked down to the event village which in reality is just a bunch of stalls selling overpriced souvenirs and a VIP area, which of course is fenced off and mainly occupied by drunk sponsors. It was about four hours until the depart so the choice is wander around or lean on the railings until something happens so we chose the former. The highlight was seeing Raymond Poulidor or maybe the reaction of the local man by the side of me at seeing Poulidor. He was so happy you could say he was chuffed. Poulidor is a sort of French Tim Henman if you like never quite taking the big prize but loved in France. He’s also quite short.

The downside of this was by the time the depart was happening the railing were about 6 deep and we missed out on many of the freebies that were on offer. I did get a fetching AG2R cap which I later gave to a Vietnamese coach driver but that was it. As for the race the riders clipped in and ride off. It took less than two minutes. Four hours in Abbeville for 2 minutes of action.

No mind we set for Rouen to catch the finish. I was certain my favourite rider, Cav, would be in contention for the stage win. When we got there the race was still 3 hours away but the finish area was packed already. Having learnt our lesson from the morning we clambered up a wall and took up a position level with the finish line with as good a view as possible and we stood there for three hours, on a hot day and to quote Julie “I stood on a wall for 3 hours and the wrong bloke won” 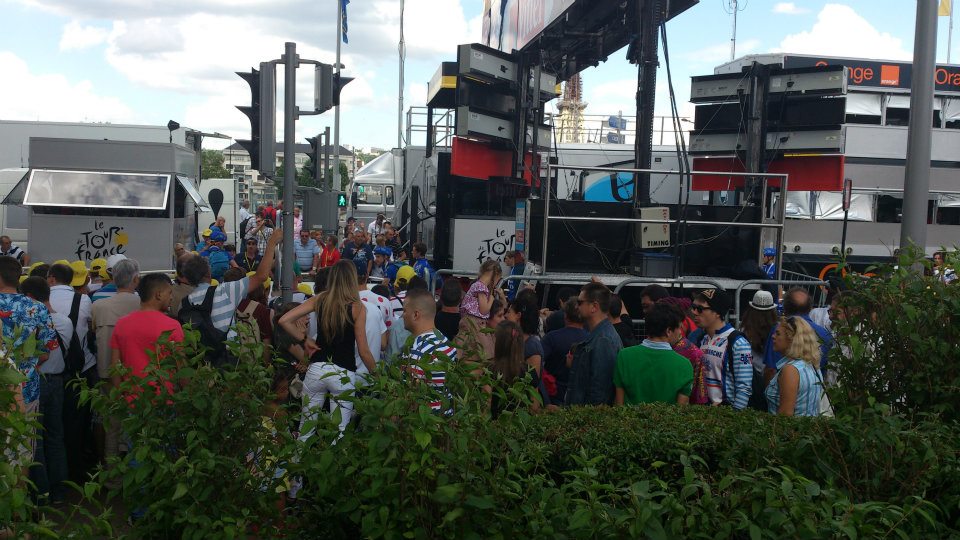 Cav crashed a couple of km out and the view we got of the finish was the top of two bike helmets at 30mph. Griepel beat Pettachi. Never mind that’s sport and tomorrow would be better.

We were going to go to the finish in Saint Quentin but driving along we realised we were actually on the route so we parked up in a little village called Bacouel. I wrote “come on Cav!!!” in the dust in the rear window and we popped down to the shop to get supplies. A couple of baguettes and some beers. Walking back a man chased us down and took the shopping off Julie and gave it to me!

Obviously a chauvinist!! Oh one note the beer was 8% 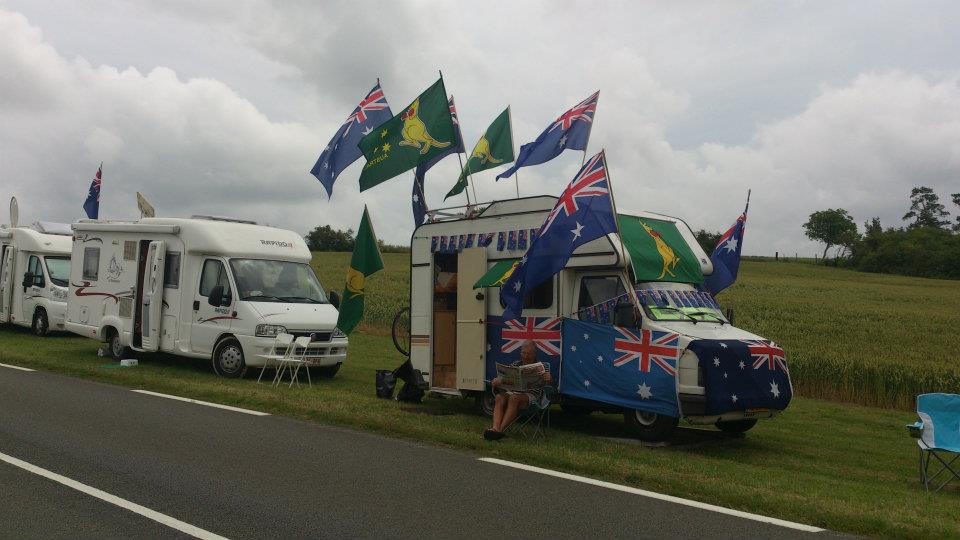 To sum up watching the tour by the side of the road is thus. You wait two hours. The sponsors caravanne goes past and throws you loads of free crap like hats, key rings, sausages and fabric conditioner. You wait another hour or so and the race goes past in a matter of seconds. You can’t even see which rider is which it goes so fast. Then you get stuck in traffic.

It is wonderful, the atmosphere is one of pure fun and celebration. The locals bring out the best silverware and dine on the pavement. The tackiness is so much fun and a free hat is a free hat. In many ways the race is incidental a day to have fun and enjoy life.

And where else can you jump up and down waving your arms about in the hope of a free inflatable pillow?? 8% beer optional

I’m booking my trip for next year as soon as the route is announced. Road trip anyone? 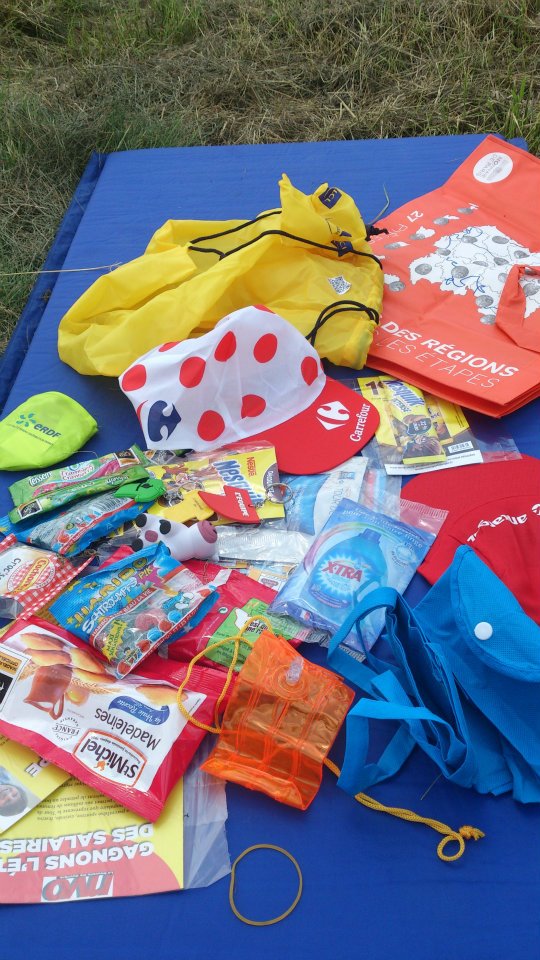 More in this category: « Adventures in Cycle Touring: Sibernik of Time Choosing the right mountain bike - the basics »
back to top