Things to do on a Bike: Cycle Touring

Last week whilst enjoying some amazing Trentino wines, I was chatting to a PR friend about travel. I know strange to be chatting to travel people about travel but one must be dangerous. The subject of Croatia came up and of course the obvious Dubrovnik. I commented that Dubrovnik is the Newquay of Croatia, what I should have said is that it's the St Ives. Overpriced, full of artistes wittering on about the light  and TV and film buffs who pretend they watch a certain program because of the stories and not the nudity and S&M. Luckily I've seen a lot of Croatia and know where the nicer, cheaper, prettier and better beered areas are so as I reeled off examples I remembered how I'd ridden to these places.

I love travelling because I love to discover new things. In a car you can discover a lot of new service areas and stress, as we did in Italy in 2007. Trains are great but 40 hrs on a cockroach infested choo choo can just be a little too much, even in Vietnam. No I want to be outside feeling the sun on my skin, smelling the plants, wondering what's going to be over the next rise, around the next corner or over the next mountain, or even when that that mountain road stops going up. 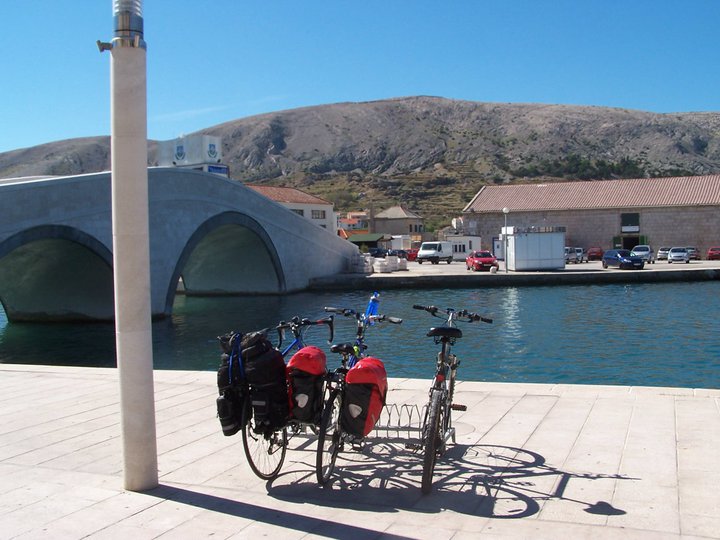 Bikes are instruments of transport but we seem to use them for going around in circles a lot. Touring brings back the simplicity of A to B. Book a flight somewhere and book the flight home somewhere else. If you're feeling adventurous then build your bike at the airport and go off to find your first night's hotel. This has been made easier by the numerous available apps and a little has maybe been lost from having to find places yourself, but still do it. If you don't want to fly then get a ferry or even ride out of your own front door somewhere. The options are there. 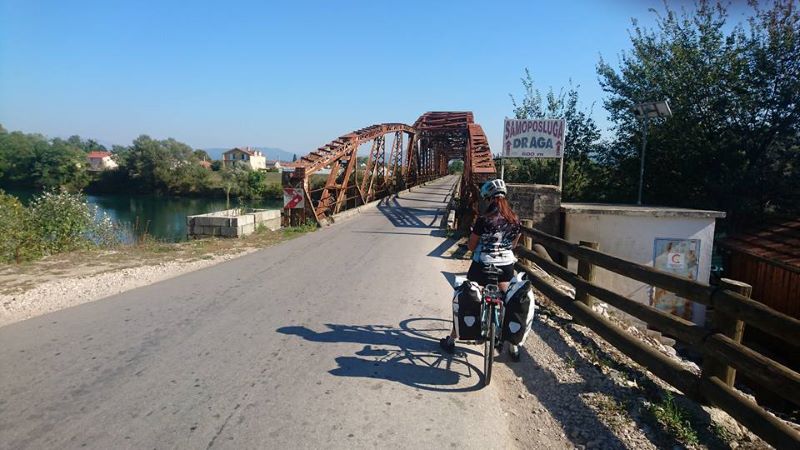 When I tell people about touring they often react with a look of amazement bordering on horror. Isn't it dangerous? No. What if you don't find somewhere to sleep? Carry on riding until we do. What about language barriers? Learn Beer, Chips, Thank You etc What about foreign drivers? Well I was nearly killed by a mirror on a cycle path so …. What if the bike breaks down and you can't fix it? Well let me tell you a tale...…..

On a 2 day leg from Belgrade to Cacak through the hills of Serbia, the weather had been tough. Wet and unseasonably cold. We'd been chased by packs of wild dogs, friendly farm dogs, other dogs and even chased by dogs. It was late afternoon and the hills had been tough. 1300 m of ascent and we had done 60km. We had twenty left to the nearest town and the best chance of a bed in Cacak. As we crested the last hill I heard a crack from Julies bike. The 16mm bolt in her sadlle clamp had snapped. Now we do carry a lot of spares.Tubes, spoke, chain links etc but it'd be impossible to carry every bolt for each bike an some spares aren't likely to be needed, such as seat clamp bolt.

There was nothing to cannibalize on either bike so I dug out the Zip Ties and gaffa tape but then fate intervened and an old bloke on a cart came along and like an old bloke on a cart should do had a lots of cigarettes but also a bucket of random bolts. Of course your average Serbian rural gentleman doesn't speak English but despite that ten minutes later a simple enough bodge job enabled us to ride the last 20km even though it was now dark. Booked a hotel and next day a local shop spent 2 hours looking for the exact bolt before having to reluctantly sell us a new seat post.

So what happens if the bike breaks down and you can't fix it. You get a great story to tell and perhaps discover the generous nature of a nation that has been much maligned by the western media the last few decades.

Like every hobby touring can be as expensive as you want it to be. Custom made titanium steeds are wonderful but a 26" old hardtail mountain bike can take you to many of the same places. Personally I started on a £300 alloy frame road bike. It rode like a Burmese python but it took me from Prague to Kotor of a number of trips, as well as the dirt roads of Bosnia and the Baltic states. 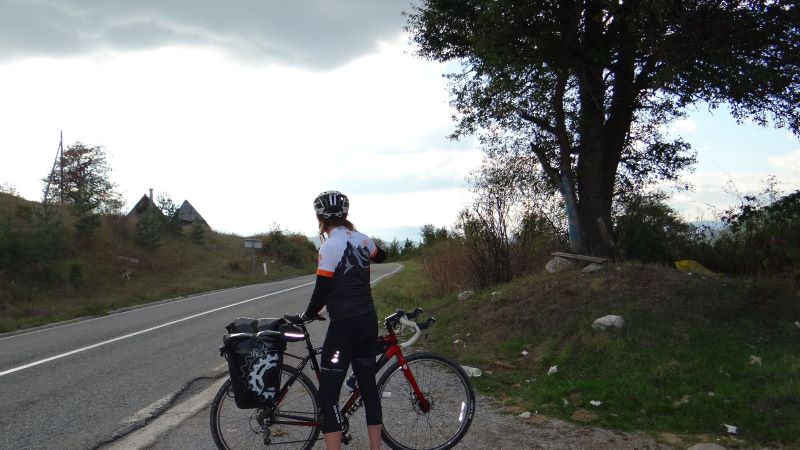 Luggage can be cheap and a for £60 a simple rack and panniers can be obtained. If you want you can camp or you can credit card tour.2 pairs of shorts and an evening outfit is all you need clothes wise and a tub of chamois cream is a godsend. Suncream and a waterproof and you're good to go.

Are you still doubting it? Maybe this can help. I've had many many great days. Seen vipers, tortoises, meteor craters, former Soviet bases, nudist beaches, the old iron curtain tank track, beautiful quiet towns, secret ski resorts and not heard English in days but there is one day that stands out. 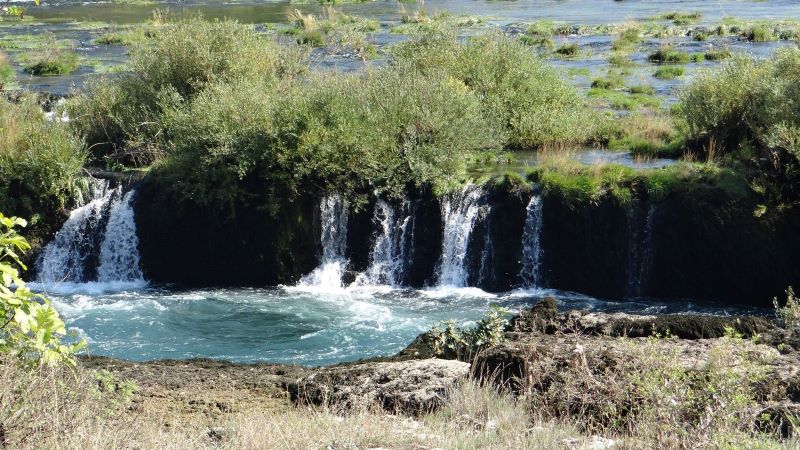 After a day of seeing the history of Mostar in Bosnia we set off back to Croatia. One side had the normal wide road and on the other side of the Neretva river. The first few miles were the front line of the tragic war of the nineties and once out of the town the trappings of tourism faded away. A gravel road/track remained mostly rideable and the peaty banks of the Neretva oozed a greenness of light. Small waterfalls, rapids  and endless variety of kingfisher and other birds. Coming across perhaps one or two cars always to be met with smiles and waves. A perfect day where the legs turn and the wheels hum. A cold beer on the Bosnian side of the border before the passports get stamped and we cross back into the EU and Croatia. More industrial now but the Adriatic sea is ahead and the road is easy. No Dubrovnik crowds another cold beer before a few last kms and a cottage to ourselves in a vineyard for the night. A glass of red with a fresh filling and much needed meal and finally watching the pink sunset 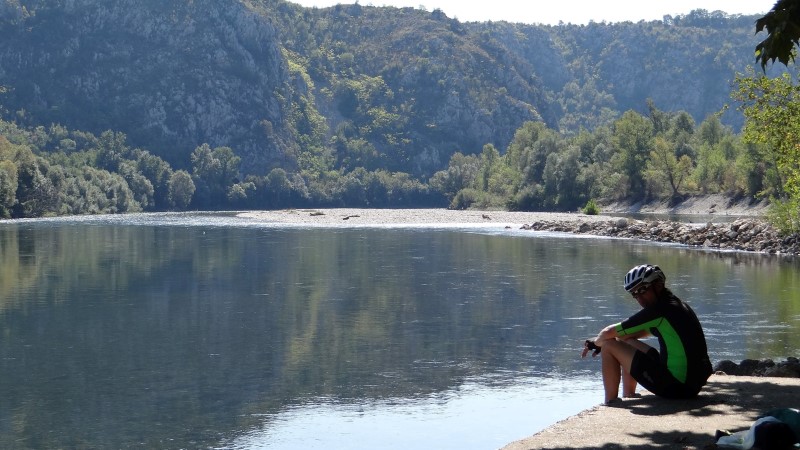 More in this category: « Top Five Reasons Innsbruck is Geared up for Bike Lovers Crankworx Innsbruck to feature 12+ hours of live MTB action June 12-16 »
back to top