As 2017 gives way to 2018 it's time for our annual look back at the best of the year's Social Media in the MyOutdoors Awards.

While The Great Outdoors Magazine and the Outdoor Industries Association have their annual awards looking at the best products, brands and even personalities we look at the best service providers from PR companies to festivals and events. The news we bring you quite simply couldn't appear without the services these individuals and businesses provide, from gear tests to event news and podcasts to videos. We have no desire to compete with TGO and the OIA but our awards are a way in which we can give due credit to important contributors to the outdoor industry who rarely get the recognition they are due.

Although social media has been with us for a decade it's only over the last year or two that business, and brands, has finally got a handle on it. For far too long Facebook and Twitter, in particular, were seen simply as a further, free, advertising platform without reference to the "social" component of social media. Tweets and posts consisted of little more than a stream of "Sale" and product notifications with very little interaction between poster and user beyond the occassional reference to the number of "likes" or "ReTweets".  Social media, however, doesn't obey the usual laws of marketing and the ROI (Return On Investment) is much harder to quantify. Where social media does work for brands, however, is in interacting with customers and for Customer Services. These are the areas in which brands can differentiate from each other and the areas where some excel.

Best Use Of Social Media By A Brand

Social Media can be a double-edged tool for brands, with the likes of Facebook and Twitter providing an instant platform for consumers to express evrything from praise to condemnation and all in the immediate glare of millions of people. At a Customer Service level social media provides a valuable tool to not only deal with complaints but, equally importantly, to be seen to be dealing with any problems. As a marketing tool social media provides an unprecedented opportunity, in the right hands, to reach an audience of millions at low cost and a build brand awareness.

Selecting a Winner in this category is usually the hardest of all the categories and there's no doubt that the competition has become harder over the last few years as brands take social media increasingly seriously. Last year's winners Inov8 have continued to excel with a well balanced combination of customer service, advertising, live event coverage and conversation. Vango have become serious contenders with their regular updates and Tentipi again kept us inspired with their daily images. Berghaus deserve special recognition for their use of social media through distributed releases rather than directly. Their branding of events like The Dragon's Back saw the Berghaus name consistently appearing on social media as well as the brand's own community channels.

The Winner of the Best Use of Social Media By A Brand 2017, however, goes to British Mountaineering Council. In a year when its branding was called into question the BMC made Social Media extensively and very effectively. The BMC brand has spread over recent years from being a representative and governing body to a major provider of digital video and information. The multiple sub-accounts covering everything from walking to competion climbing means the brand is constantly on-screen across multiple social media platforms. 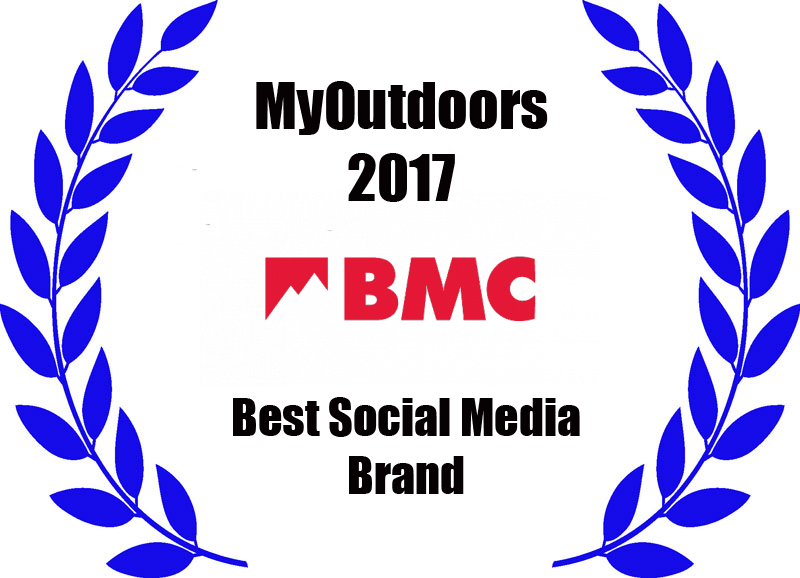 Best Use Of Social Media By A Public Service

The "Public Service" category covers Government, local and national, and public bodies such as National Park Authorities. It's also probably the category with the most constraints and the biggest gap between the poor and the exceptional. Yorkshire Dales National Park again shows the way for National Parks with its regular updates  and a willingness to engage on a wide range of subjects.

The Winner of the Best Use Of Social Media By A Public Service for 20t7 goes to Ordnance Survey. While predominantly advertising its products and services the OS has managed to keep its content interesting and inclusive. Maps and mapping can't be the easiest thing to sell, even among lovers of the outdoors; you can't just change the colour each year, the content generally remains the same for several years, but regular polls, quizzes and inside views have helped keep them visible throughout 2017. 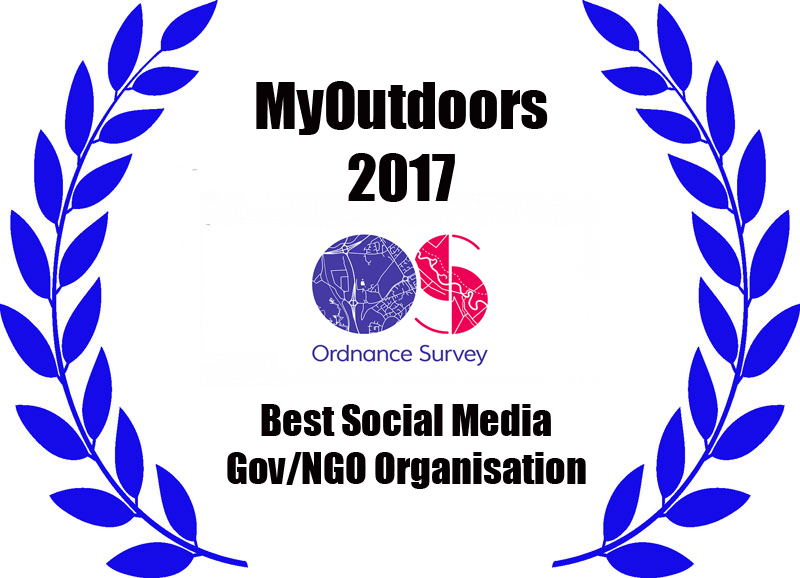 The Blog is probably the most recognisable use of social media in the outdoors community, but unfortunately the term "blog" has become increasingly corrupted over recent years. A blog is a personal, independent, recording of experiences and thoughts, but more and more "corporate" or "sponsored" blogs have been appearing as the industry tries to find a marketing angle in the process. Quite simply a corporate blog, or one by a sponsored athlete or ambassador lacks the independence of a real blog. As such we've excluded corporate and sponsored blogs, although there are many good contributions from the likes of Berghaus/Leo Houlding and the OS' #GetOutside Champions.

The Winner of the Best Blog 2017 again goes to Fiona Russell for Fiona Outdoors, winner in 2016. As a professional journalist of many years Fiona uses an extensive database of contacts to constantly bring new and informative content that's well written and presented. The quality of her content has seen Fiona become a regular contributer to thrid party publishers but her own blog is still the benchmark for aspiring bloggers. 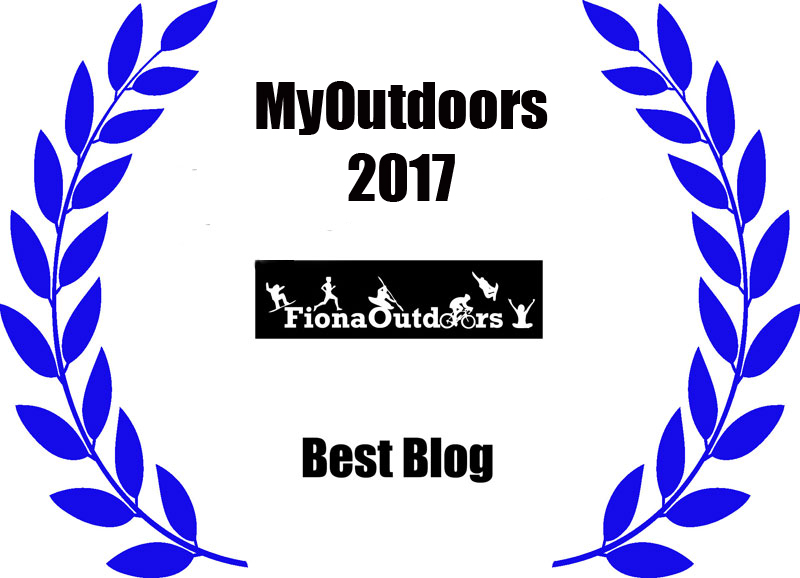 It's been a difficult year for outdoor based festivals with the UK's weather provining insreasingly unpredictable. Keswick Mountain Festival had to close its main venue for the final day due to strong winds. Sheffield Adventure Film Festival continues to grow and as it does it's becoming increasingly accessible with a series of free spectator events around the city centre over the weekend. Likewise Cliffhamger has taken adventure sports out to the public of Sheffield and is an example to the industry in mass participation.

The Winner of the Best Festival 2017 again has to go to Kendal Mountain Festival. Kendal still has some niggling little problems but it's been a real pleasure to see an increasing number of free events in the timetable. Kendal continues to attract A list speakers and film premieres like no other UK mountai festival and continues to be "The" social event of the year. Kendal also has to be commended for its year round outreach work, taking the festival highlights on tour around the country. 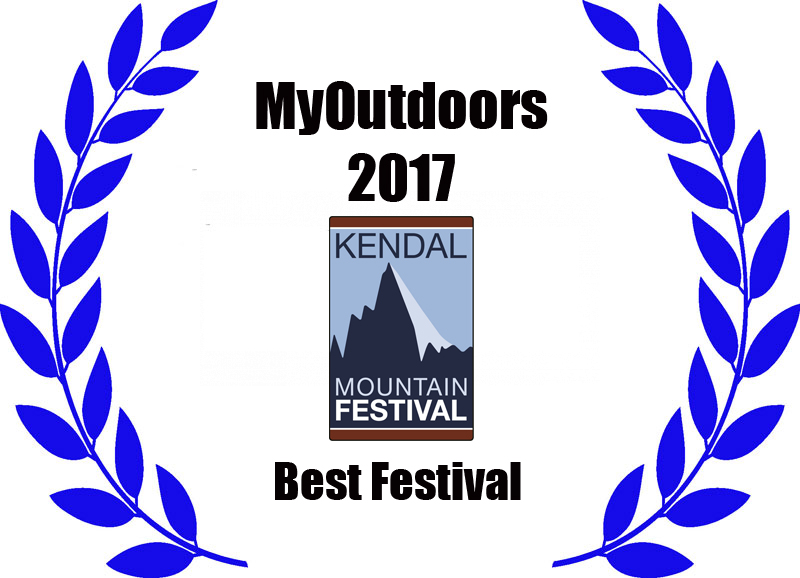 Best Use Of Digital Media

The UK outdoor digital media industry has never been in better health. A new generation of film makers and photographers, combined with ever improving technology, has given us unique insights into everything from Antarctic expeditions to Sky Races. In 2017 highlights included the Spine and Dragon's Back races; events which are as serious an undertaking for media teams as the athletes taking part.

2017 has also been a special year for outdoor and adventure film in the UK with 3 major biopics in a single year; Bonington, Pysochovertical and Alan Hinkes. Last year's winner Andrew White has continued to accumulated millions of views for his Walks around Britain which has been on-screen in the UK every single day of the year. While the majority of the industry concentrate on elite level sport Andrew constantly reminds people that you don't have to climb mountains or walk for tens of miles to gain the physical and mental benfits of walking. With the largest viewing figures of any UK outdoor production, a message that promotes walking to beginners, and a unique approach to marketing The Winner of the Best Use of Digital Media 2017 is again Andrew White and Walks around Britain 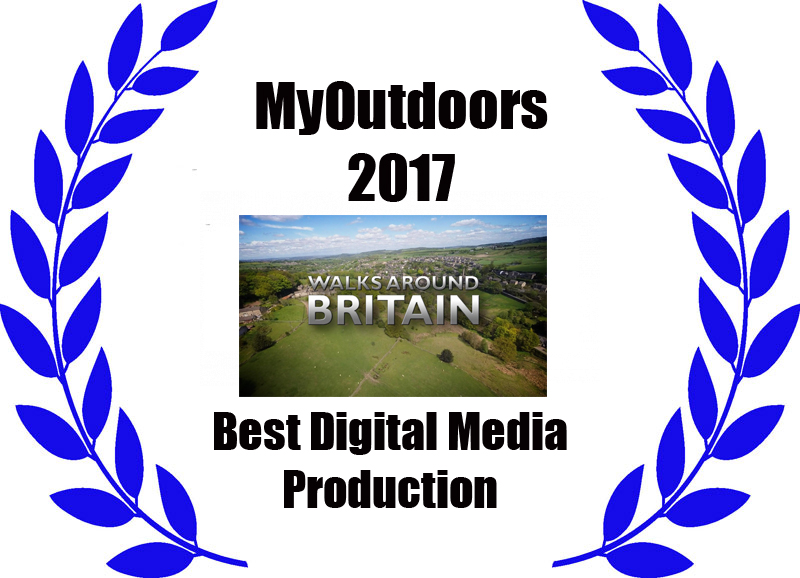 After a bit of a boom in 2016 UK based outdoor and adventure podcasts have slowed down a little. Last year's winner  Jam Crack Podcasts continues to entertain and has become essential listening for its ever increasing following. The Winner of Best Podcast 2017, though, goes to an old favourite in The Outdoor Station. Now approaching 450 episodes Bob Cartwright's podcast has passed 10 million downloads and always manages to find something different and engaging. 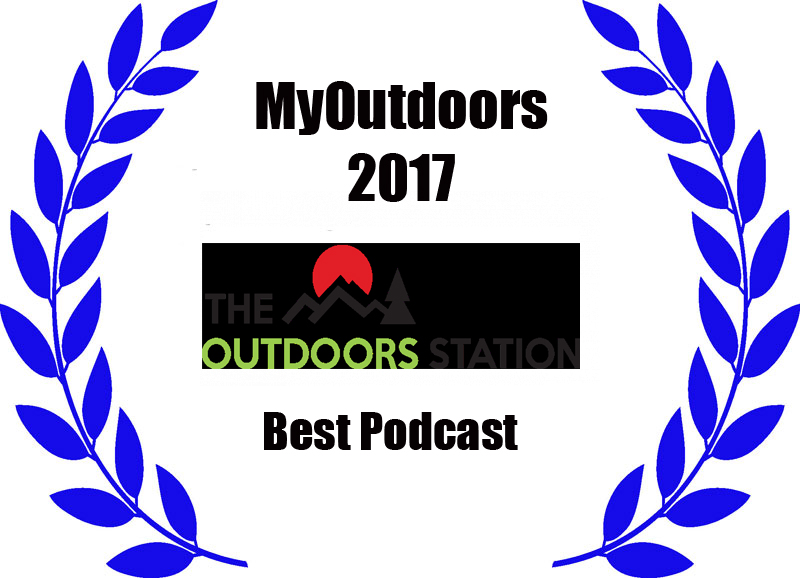 Often maligned the PR company is actually the lifeblood of the outdoor media industry. Quite simply without the "PR" we couldn't bring you the news and reviews that we do. Over the last few years the PR has had to make major adjustments from a print media dominated platform to a predominantly digital output, and it's not been an easy transition. In a fast moving world the best PRs have learned that Editors and Publishers don't have the time to extensively reformat content or chase complimentary images, but instead provide content that's ready to go live within minutes of being received.

Last year's winner Right Lines Communications continues to be a shining example of good practice, going way beyond what's expected with news updates even when Chris is on holiday, or late on a Sunday evening when everyone else is trying to forget a new week of work ahead. In any other year Right Lines would have undoubtedly retained the award.

Over 2017 we've worked closely with Swiss Tourism and their PR teams and their UK team have been magnificent. This year's Best Public Relations Companyaward, though goes to East River Public Relations. Sue and team pushed Chris and the Right Lines Team close last year and while last year's winners have excelled again East River have a knack of putting on truly memorable press events; they're infrequent but always memorable. With a growing client list East River have continued to supply copy-ready content in good time for publishing, always responded to questions with minimal delay and, as with last year's winner, is always a pleasure to work with. 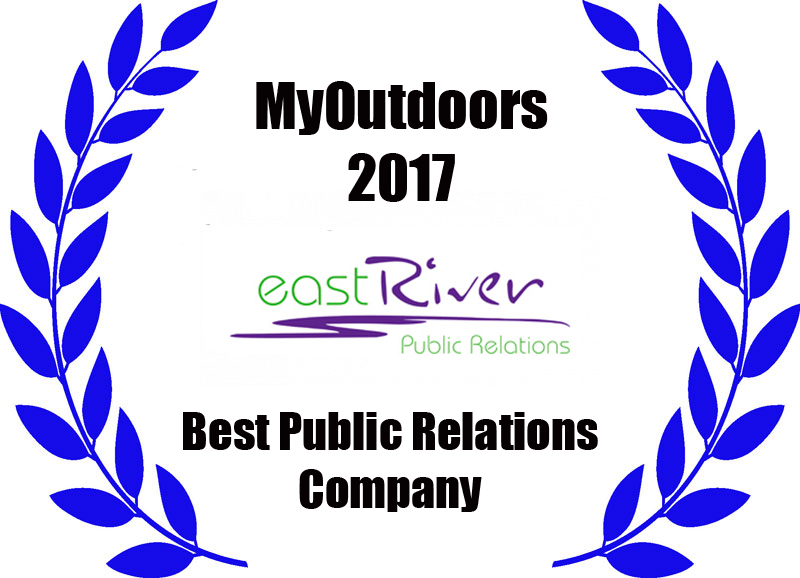 Best Use of Social Media

Looking back on 2017 it's been a year of consolidation and innovation. The explosion in platforms appears to have settled down to a core of Facebook, Twitter, YouTube, Vimeo and Instagram and the outdoor industry, after a reticent few years, have started to really embrace social media. There are brands now who send a dedicated photographer to cover events for social media and all the top level ultra races now have full live tracking and dedicated social media teams. Improvements in technology have made a real difference in the quality of both still and moving images as well as making filming possible in ever more remote locations.

The Winner of Best Use of Social Media 2017, goes to a proven expert in the field. Dave Cornthwaite provided one of the year's most enthralling stories as he took on a 1245 mile challenge water biking around the Nowegian coast. Dave's unique blend of humour and humility made his daily updates, across multiple channels, essential viewing. Few people have grasped the power of social media like Dave Cornthwaite, or used it so effectively. His posts are consistently amognst the most engaging, whether covering his 1000 mile adventures or promoting the Yes Tribe. What will be interesting to see is how the dynamic changes now he's engaged to be married. 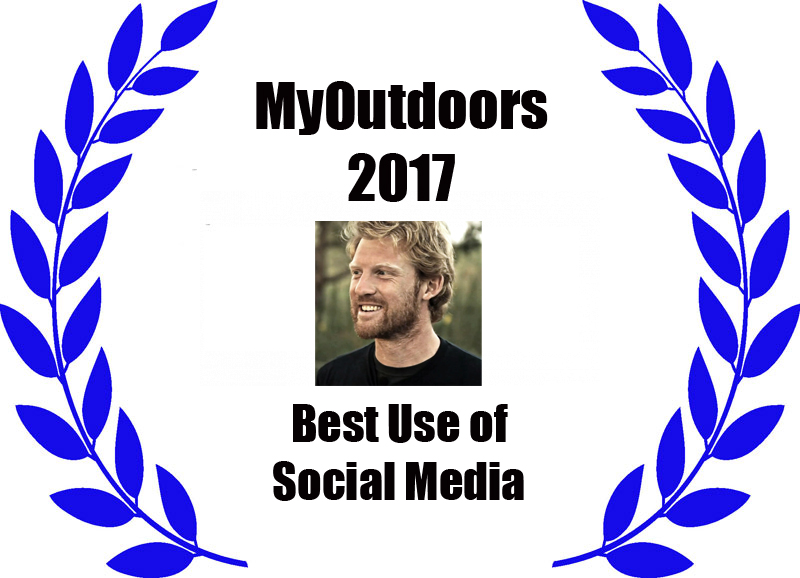 More in this category: « BMC and the No Confidence Vote We don't buy into products, We buy into experiences. »
back to top