The 2018 Heineken Race to The Tower

Threshold Sports are well known for their Trail Race Series, with their events Race to The Stones, Race to the King and Race to The Tower regularly topping the votes at awards ceremonies. We sent Giles Thurston, a member of our running editorial team, along to find out more.

2017 was a difficult year for me injury wise but with things looking up in 2018, I once again started to tentatively pull together a race schedule. When the Threshold Sports team approached me and offered me a place at one of their races, I was happy to take them up on their offer.

Looking through their Trail Race Series, Race to The Tower was my preferred option. Calendar wise, it fitted with my recovery and gave me enough time to try and get ultra fit before it started. Additionally, I had previously done a little bit of running along the Cotswold Way and I was keen to head back to the area and explore more of this beautiful national trail. 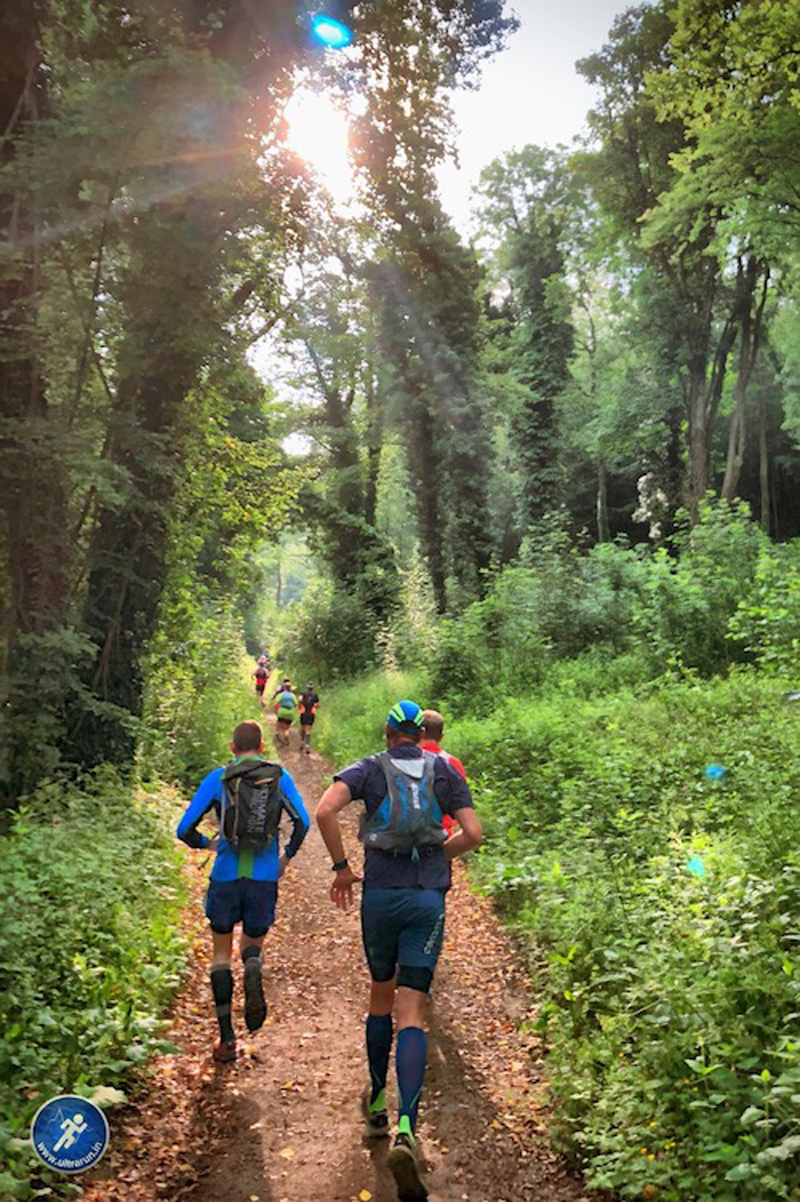 Thresholds events are really inclusive, offering competitors the opportunity to run or walk their routes, over one or two days. Race to The Tower was no exception and I opted to tackle the double marathon distance in one go. With over two thousand metres of ascent this was going to be a challenging course, especially considering my race preparation would largely be undertaken in the flatlands of East Anglia.

I had opted to park at the finish and take the bus laid on by Threshold back to the start. I arrived at Broadway Tower just before 6am, standing proud in misty skies, high above the village of Broadway. I boarded the bus with other excited competitors and headed south along the M5.

The start at The Bird in Hand was a slick and professional operation and after the usual pre-race rush queuing for the toilets and warming-up, the first wave was sent on its way just before 8am. 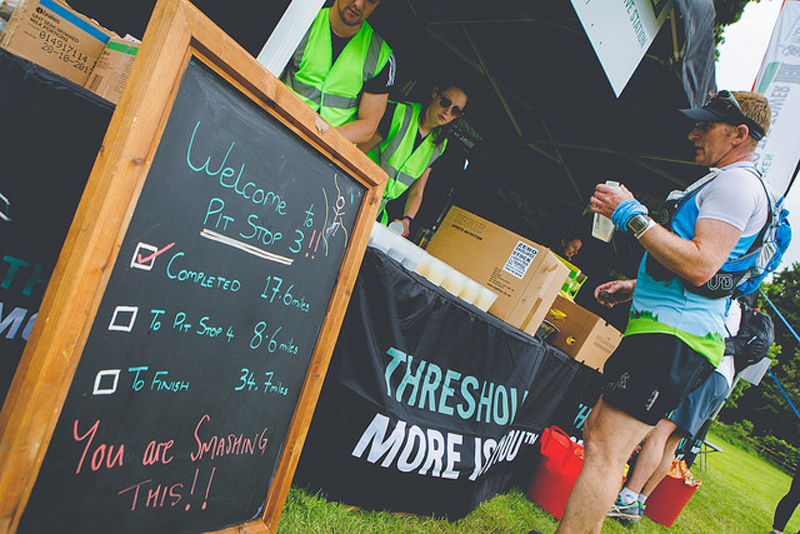 The course is broken down into eight legs, with distances ranging from 4.75 to 8.7 miles between each checkpoint. The half way checkpoint, is actually called The Base Camp and it is here that those competitors tackling the distance over two days will stop and party the night away, with tented accommodation, food and entertainment laid on by Threshold Sports. Every checkpoint is well stocked with food and drink, with a range of race sponsors and branded products available to suit the tastes of most runners. 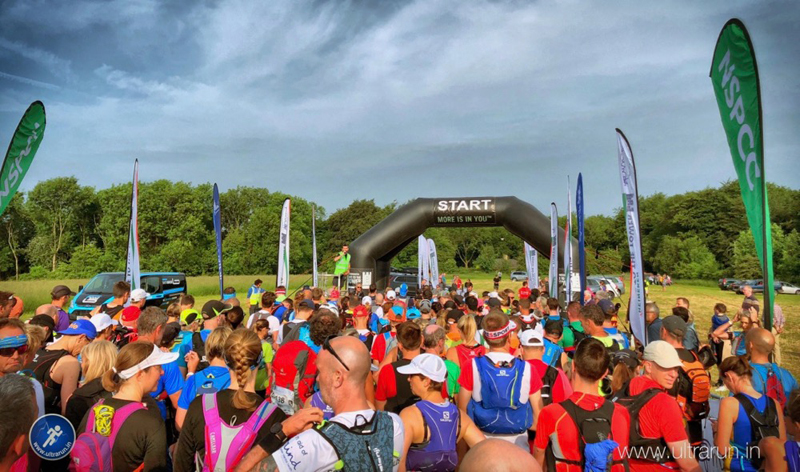 The first few legs are run mainly through woodland, on broad and runnable trails. The previous week had been largely dry, so the trails were easy going underfoot and any mud was easily avoided. The landscape was rolling during the first few legs, with just the occasional steep uphill section that necessitated a walk. The course was also extremely well marked, with over two thousand signs out on the course and each of the near 160 gates clearly numbered. There were also markers every mile, so you could tick off the distance, along with signage after junctions, warning competitors if they were going the wrong way. All in all the route was easy to follow and would be a delight for any runner who is concerned about map work or self navigation.

Unlike many ultra marathons, Race to The Tower has a recommended rather than mandatory kit list, with many runners taking advantage of this and carrying minimal kit. I had opted to take my usual pack and kit, although as the mist burnt off and the temperatures rose, I soon regretted that decision and looked jealously at other runners as I ran.

As we approached Cheltenham the race hit its first big climb up to Short Wood, where one of the official photographers was kindly waiting to capture our pain at the top. I wasn’t feeling it in my legs today and my mind kept over analysing every ache and pain, in case it was my injury returning. My stomach was also playing up and generally I was not a happy camper. 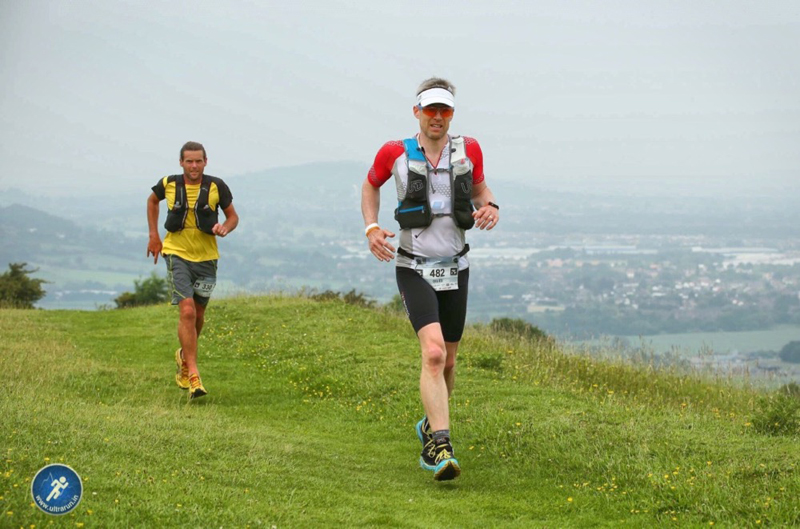 The route continued along the Cotswold Escarpment, through some beautiful countryside and across a mixture of terrain but mainly through woods and open fields. As the sun grew stronger we were increasingly grateful of the shade provided by trees, although the open fields gave us some magnificent views.

The half way checkpoint couldn’t come soon enough and I was graving food and also needed to attend to a hotspot developing on my right heel. In the distance we could hear music playing and eventually we entered the field, with the full half way Base Camp laid out before us for the two day runners.

One day competitors were funnelled right to a small tent offering water and cold snacks. The choice here was less than at any of the previous checkpoints, which was a surprise, but they at least had oranges, which I dived into to help my stomach.

Many runners were finishing here, which was a surprise, as I had expected the two day runners to start in a later wave. This meant that the second half of the route was going to be much quieter and with my feet checked and more oranges eaten, I headed back onto the course and on my way.

The next section was across familiar territory, namely Cleeve Hill and the countryside surrounding Winchombe, where I have run before. Cleeve Hill also marked the highest point on the course and while it was great to tick that landmark off, with more than twenty miles still to go, there was no time to dawdle and enjoy the view, so on I ran. 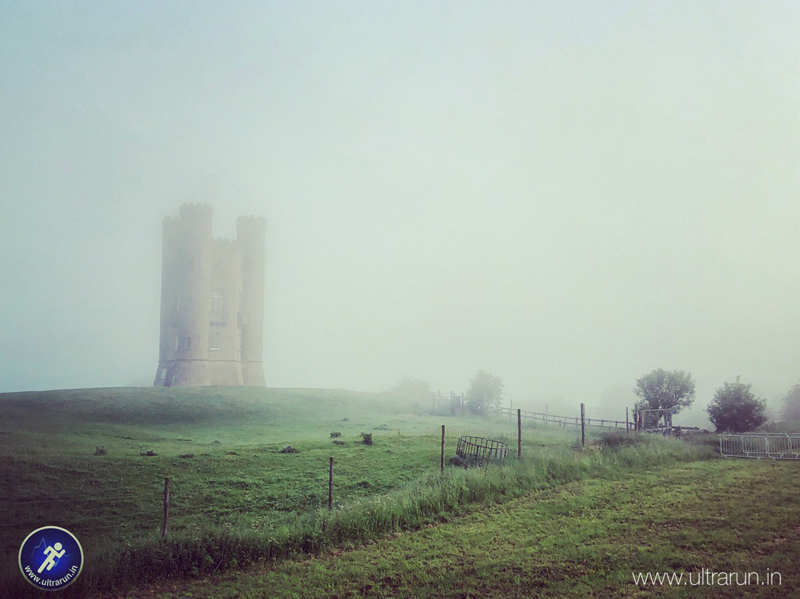 At around the forty mile mark I started to feel stronger and the stomach pains that had been troubling me for most of the day had finally settled. My legs felt tired but with the finish now just thirteen miles away I felt I could push a little more. On the climb out of the picture postcard village of Stanton, I focussed on keeping up a good tempo and caught and passed a number of other runners. From here it was downhill to the next checkpoint and with Broadway Tower finally visible in the distance, I forced myself to keep running, only allowing a walking break when the terrain kicked back uphill. 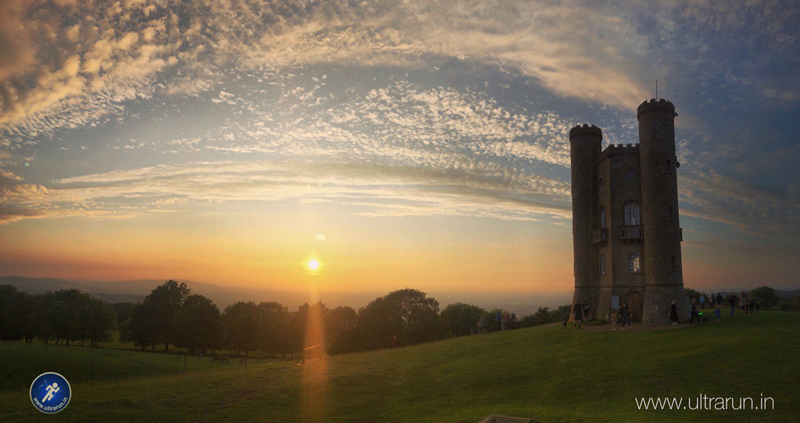 The final leg was just over five miles and the finish was tantalising close. From here the course took a elongated loop out along country lanes, across the valley floor, before turning back towards the village of Broadway and the races final sting in its tail, the mile long climb through fields to the finish at Broadway Tower.

By now the heat of the day and fatigue from running nearly fifty miles was really kicking in but I knew that one final push would see me to the finish. The route took us straight up the Main Street in Broadway, which was busy with people out enjoying the weekends Arts Festival. This portion was slightly uphill, something which I would have run earlier but was now just down to a determined walk. I was ready to finish and enjoy an ice cold beer (all be it non-alcoholic) that Heineken, the lead race sponsor, had on offer at the finish.

I finally returned to the fields one final time and started the climb the finish. In the distance I could hear the cheers floating down through the trees, which frustratingly didn’t seem to get any closer. Eventually I spied the tower peering over the top of the trees. At last I had arrived at the top and could see the Tower, with the finish line gantry just behind it in the meadow. 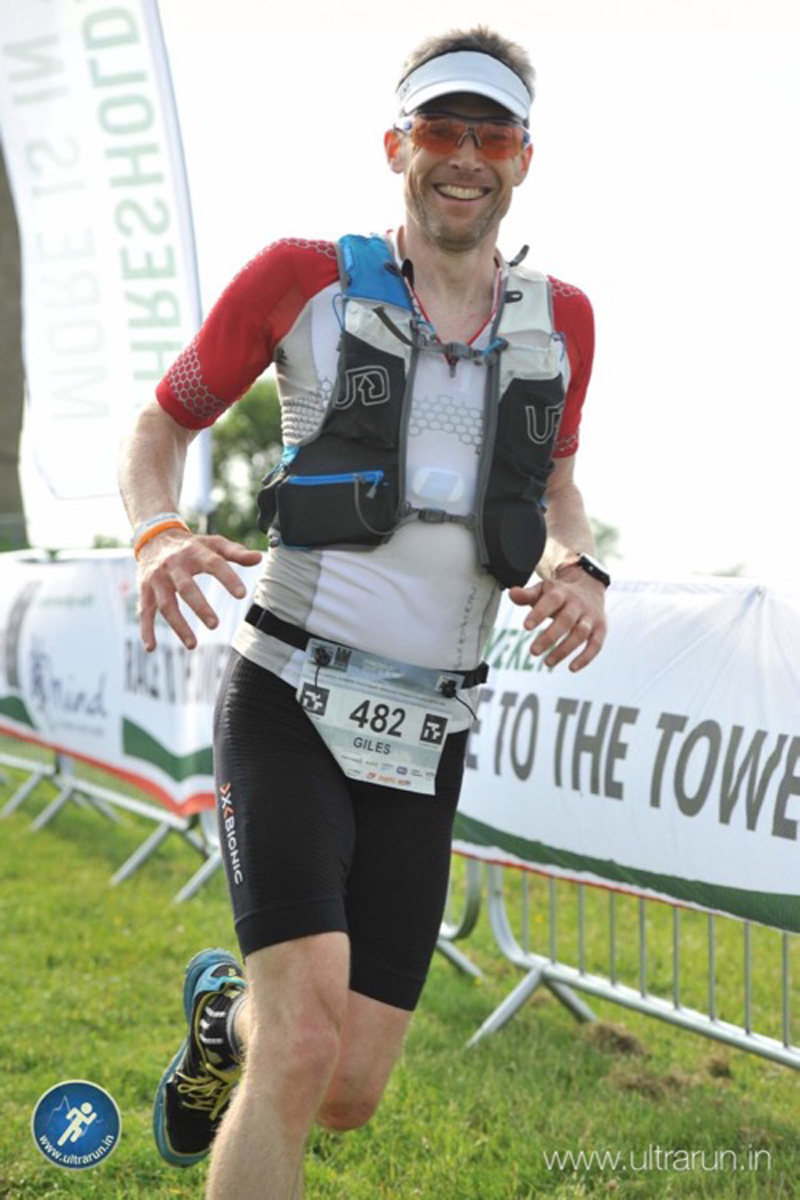 One last burst of speed saw me flying down the finishing shoot, taking the official photographer by surprise. A quick warning shout soon got the camera up. I crossed the line in 10:17, 24th out of nearly five hundred one day competitors. I was astounded that a race that felt like it had started so badly, had finished so well and the cold beer that was thrust into my hand at the finish tasted all the sweeter for it.

Reflecting a few days later I have to say that I was impressed by the HEINEKEN Race to The Tower 2018. It was a slick and professionally run operation from start to finish. The course itself was stunning and challenging in places too, with plenty of vertical and some technical ascents and descents to keep things interesting. 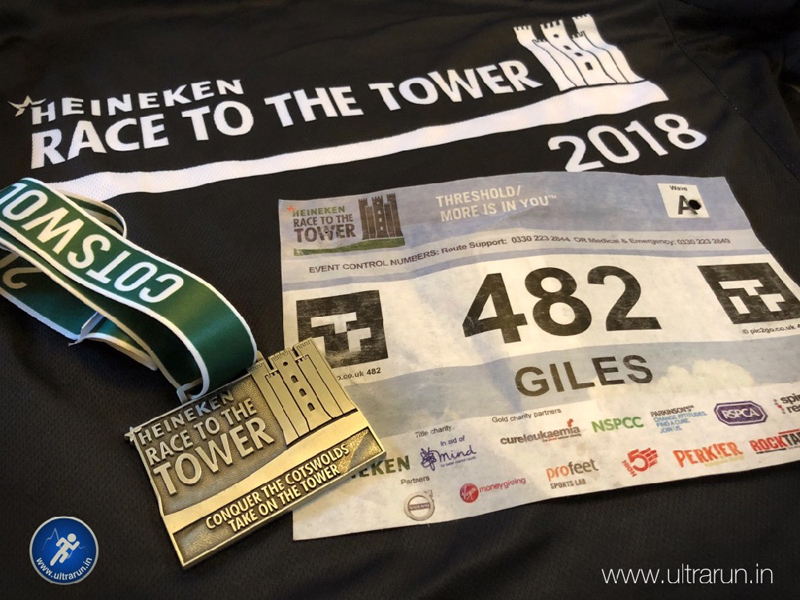 If you are looking for an enjoyable running adventure in a beautiful part of the country, then I can definitely recommend The HEINEKEN Race to the Tower to you. For further information about this and the other events laid on by Threshold Sports be sure to check-out their website. Next years race takes place on the weekend of the 8th and 9th June 2019 and you can register your interest to be notified when entries open.