So Kendal's over for another year, and tired, aching, bodies have redistributed themselves around the country. It was a year of changes at the World's biggest mountain festival and the consensus over the weekend was 2014 was the best ever KMF. After three years of consecutive good weather the rain returned on the Friday night, making life interesting at the school field campsite, but graciously holding off through most of Saturday and Sunday.

The Awards ceremony moved from Sunday to Saturday and both the Boardman Tasker and KMF People's Choice award had new names to add to their roll of winners. Kendal celebrated its international status with not one but two living legends flying in and under the guidance of Henry Iddon the cultural side of the festival took on a more prominent role. Yes there were a couple of minor issues over ticketing at one of the outer venues and some confusion over film categories but these really were minor blemishes. 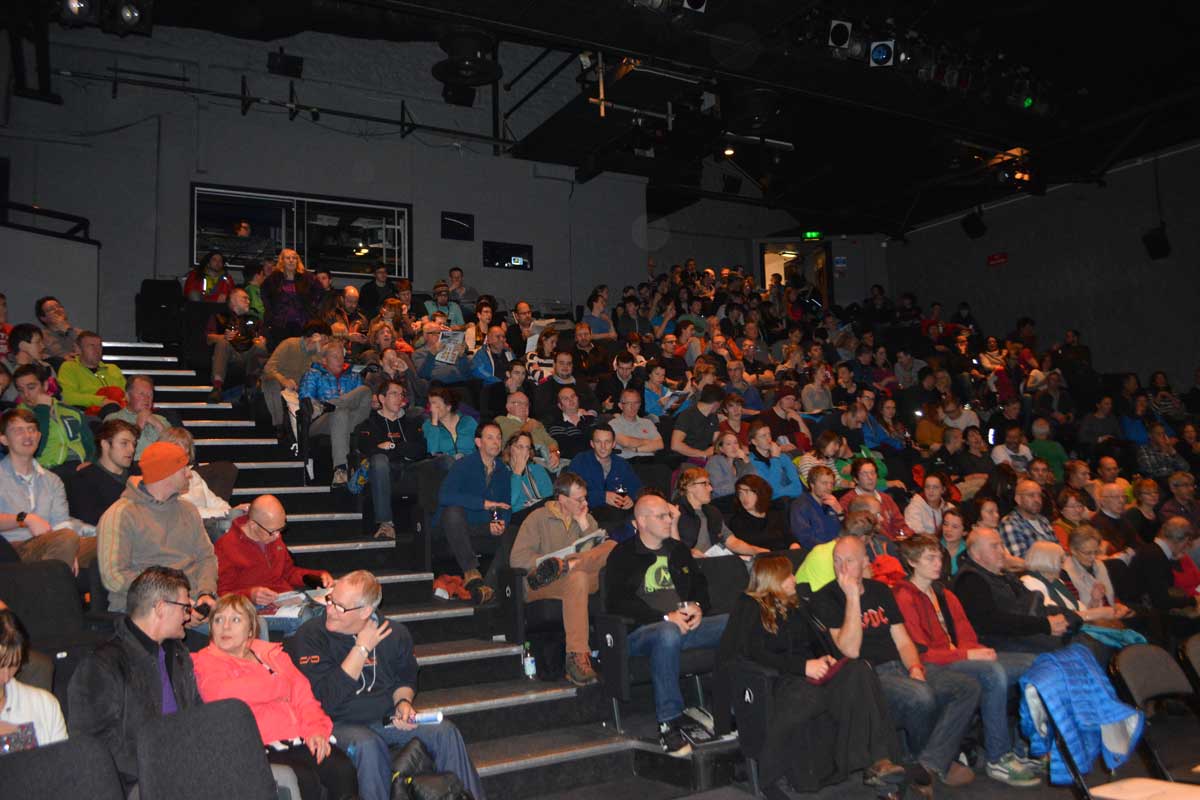 Another year of packed theatres for Kendal Mountain Festival

It's pointless saying that the 2014 Boardman Tasker Award had a very strong field; it's probably the most respected annual award in the field of mountain literature and every year's a strong field. Supeficially the shortlist looked typical for a Boardman Tasker list, with the almost mandatory volume on some aspect of Mount Everest and a healthy wedge of retrospectives along with an autobiography from one of today's leading lights but the appearance detracts from the reality that we're in a golden age of mountain literature and this year saw a record entry of over 40 books submitted. 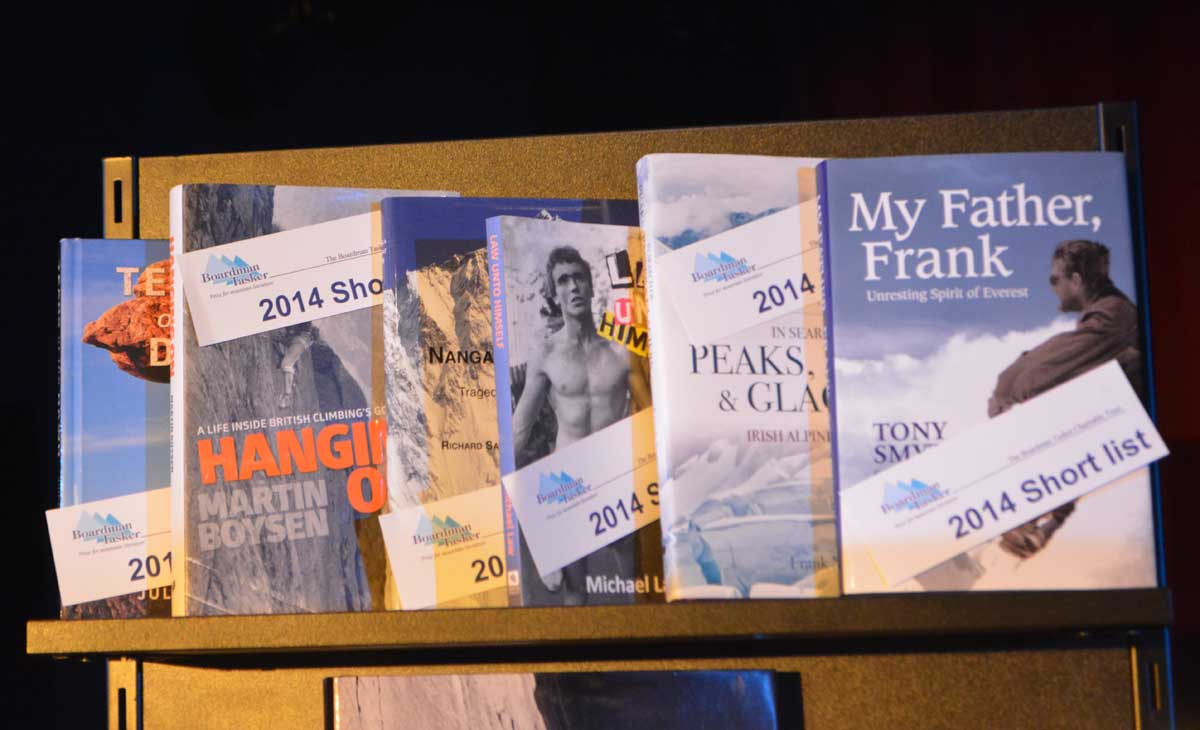 For some reason the Boardman Tasker Awards don't seem to appear on the "must see" list of the general Kendal audience and, being honest, there have been years when the 3 hour plus ceremony has dragged somewhat, but 2014 was definitely not one of those years. With four of the six shortlisted authors present and Ed Douglas conducting the post-reading interviews the time flew by. The length of the selected passages for the readings were perfect in terms of drawing the audience in and the interviews both illuminating and, at times, genuinely funny.

The second half saw two winners from last year accepting their awards, having been unable to attend in 2013. Sophie Miocevich collected her Young Writers Award and Jim Curran made a welcome return to collect his Lifetime Achivement Award. The 2014 Boardman Tasker Award for 2014 was then presented to Jules Lines for Tears of the Dawn. It was to to turn out to be a very memorable festival for Jules as Stone Free, in which he stars, going on to take the Best Adrenaline Film Award for Alastair Lee's Posing Productions. 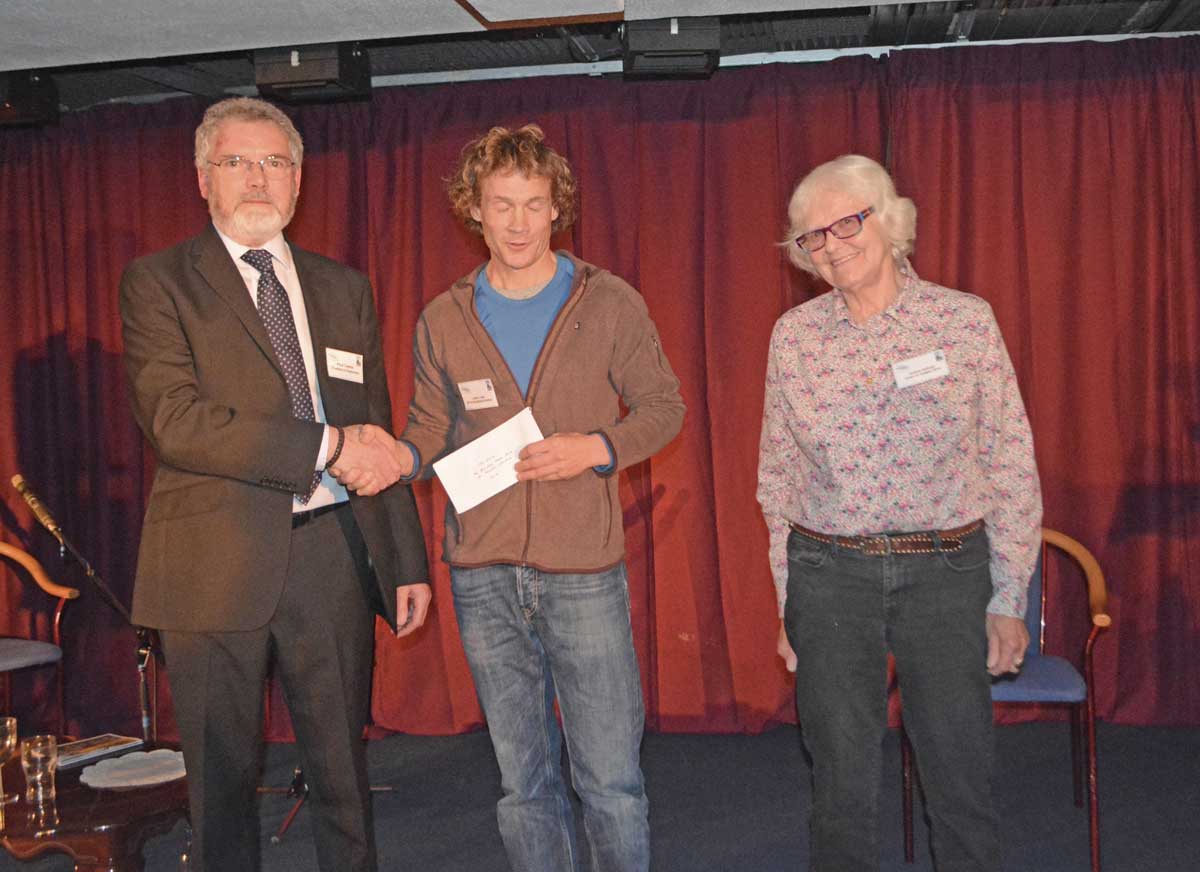 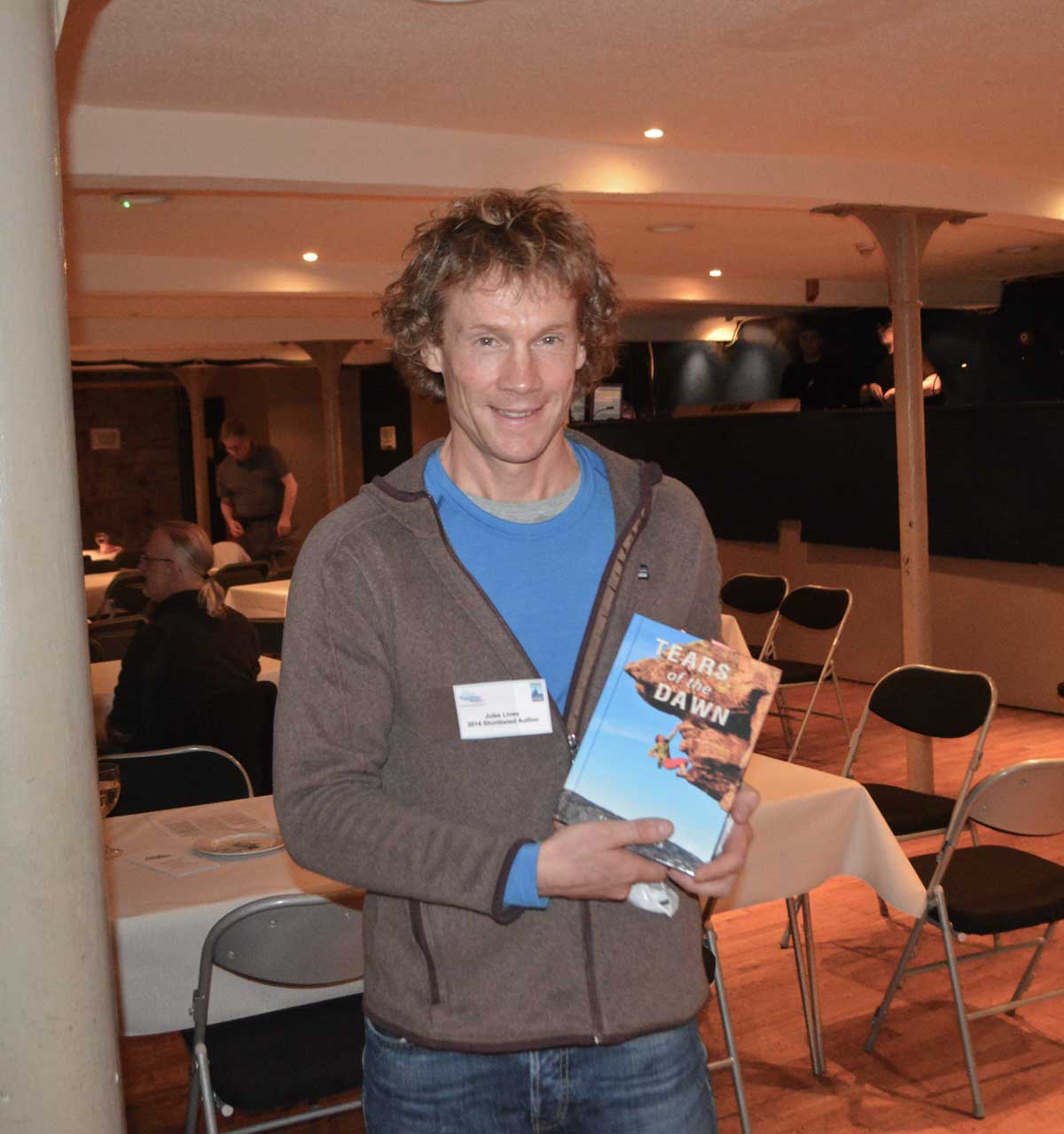 While Kendal has built an international reputation as a film and social festival it was good to see the cultural aspect taking a more prominent position. With Creative writing, film schools, book readings, a photo exhibition and Meet the Artists there was always something on hand to allow the film induced adrenaline rushes to subside. While the Boardman Tasker Judges had chosen their winner in the afternoon John Porter, co-founder of the festival 15 years ago, took to the floor a couple of hours later to read from his newly crowned Banff Grand Prize winning biography of Alex Macintyre, One Day As A Tiger; surely a strong contender already for next year's BT. The word from John is that next in his sights is a biography of Al Rouse, with work starting on it early next year. 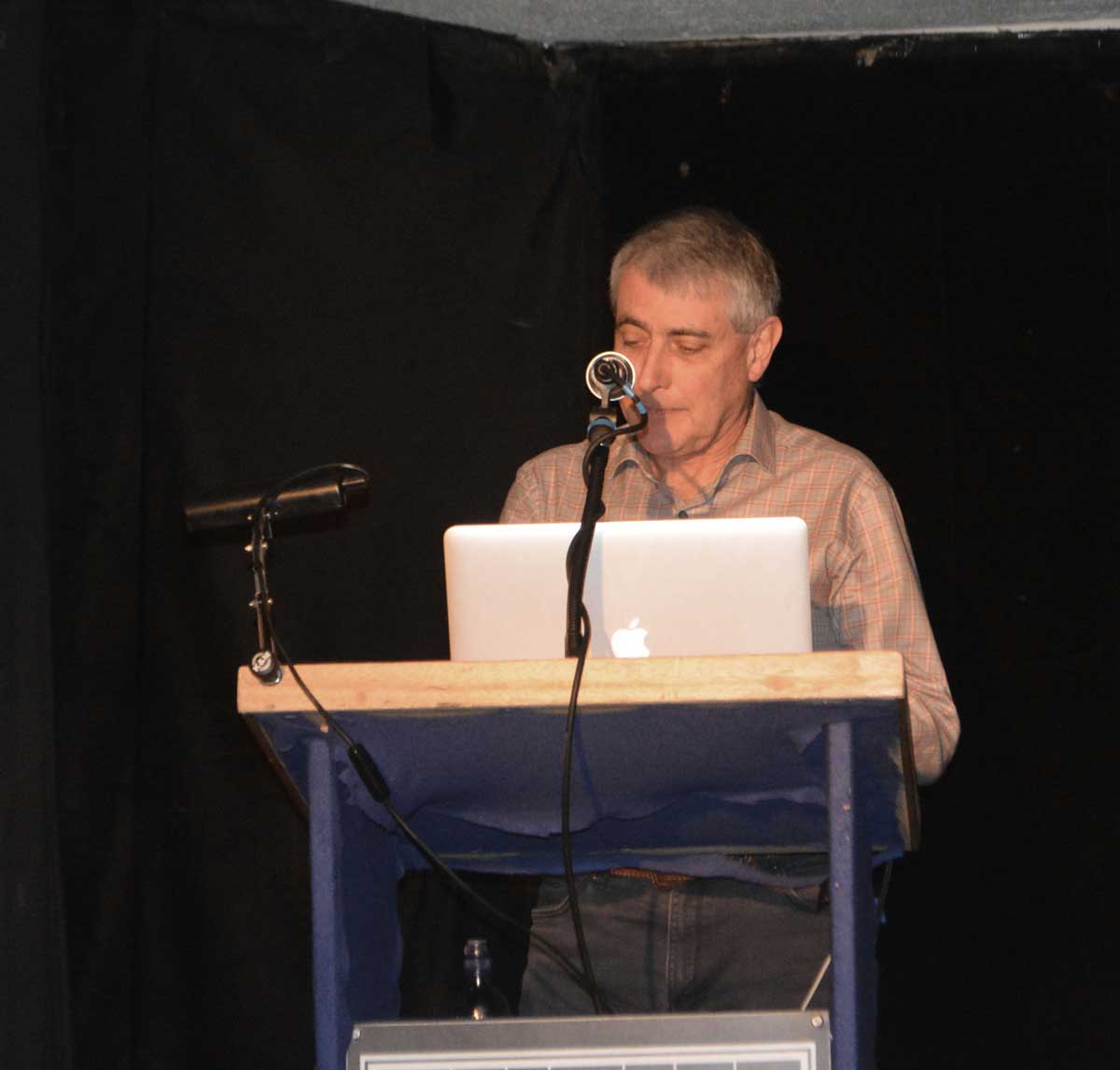 John Porter reads from One Day As A Tiger

The BIG speaker was, of course, The Swiss Machine Ueli Steck. From the moment he was rumoured to be on the M6 on Friday afternoon his was the name on everybody's lips. From book signings with Jon Griffith to interviews with a lucky Trek and Mountain reader he was suddenly everywhere; even joining the Saturday morning 10k race! Close on 900 people packed the Leisure Centre for his talk, presented so clearly it stands as a reminder of how poor we Brits generally are speaking foreign languages. Delivered with a wonderfully dry sense of humour the audience alternated between disbelief and side breaking laughter as he examined what really drives him to fast ascents and an acknowledgement that he's getting older and the time will come when his records will fall to someone yopunger and faster. Importantly, though, he revealed that while time is important to him it's a race aginst his own abilities rather than other people's and above all the ethos of fast and light enables him to make ascents that may otherwise not even be possible given the fleeting nature of weather windows at altitude. 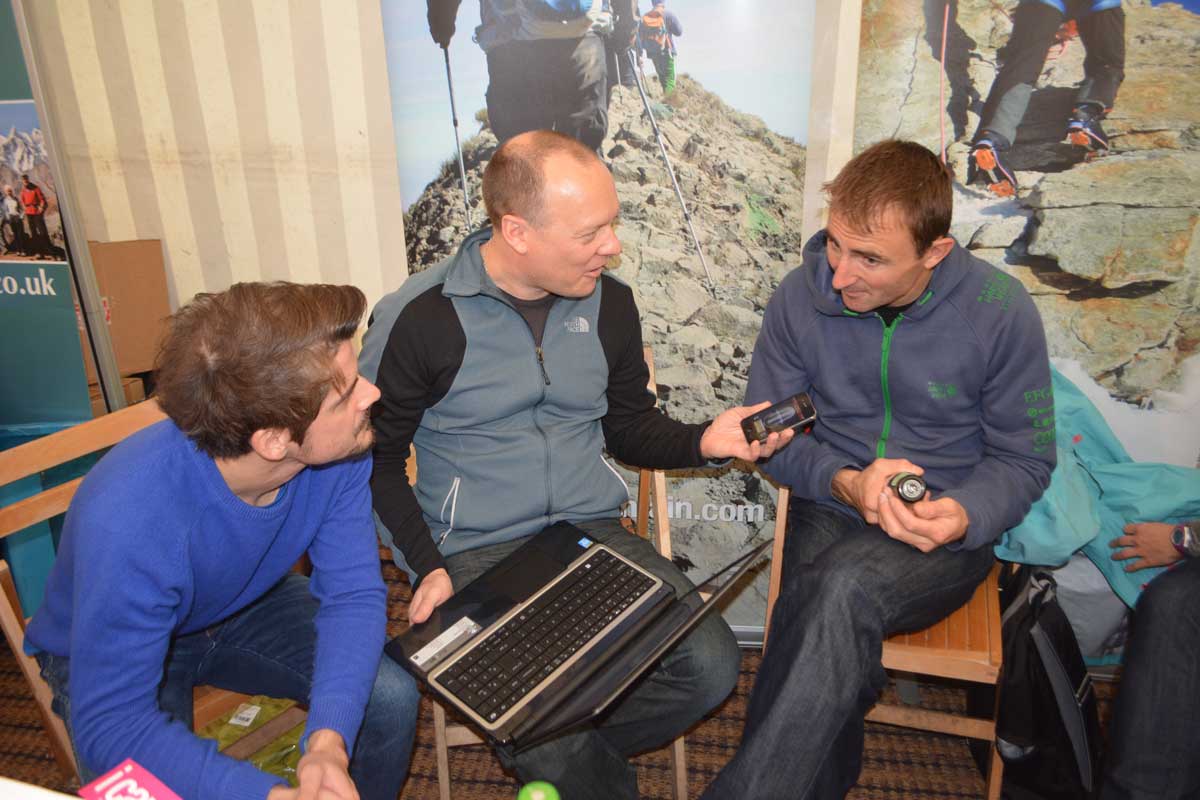 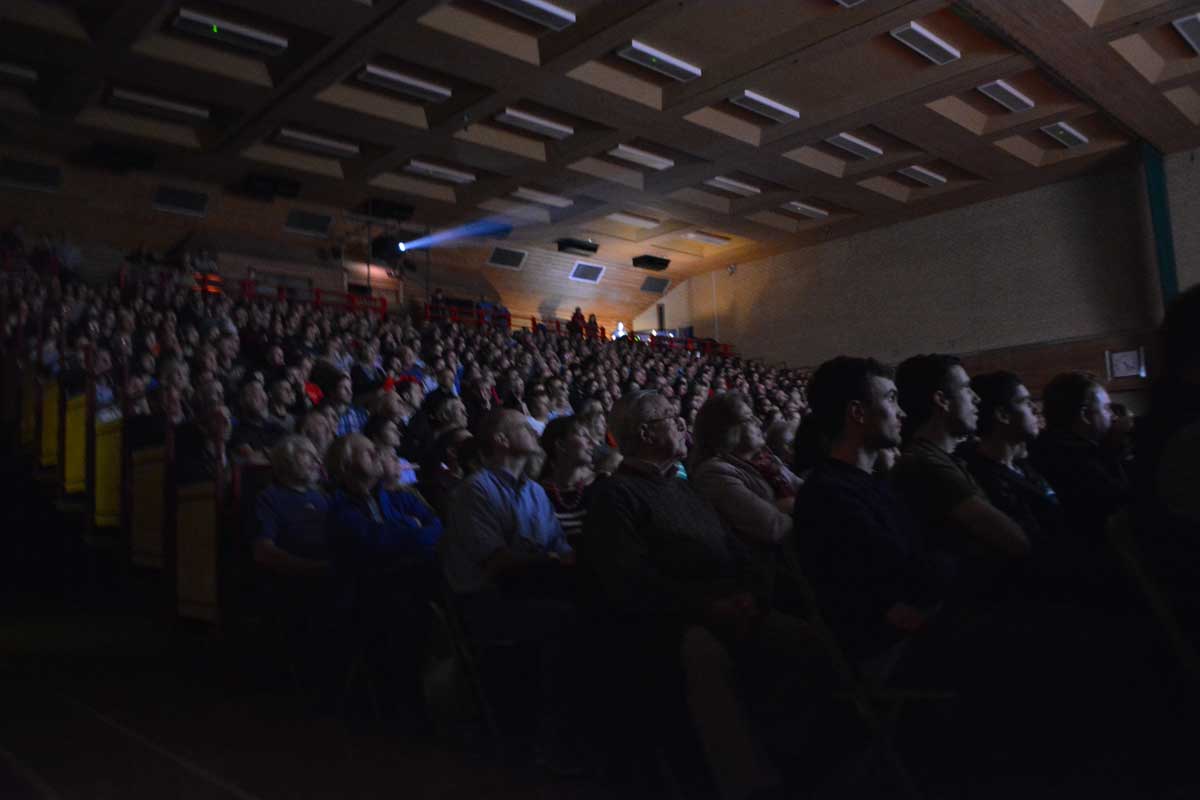 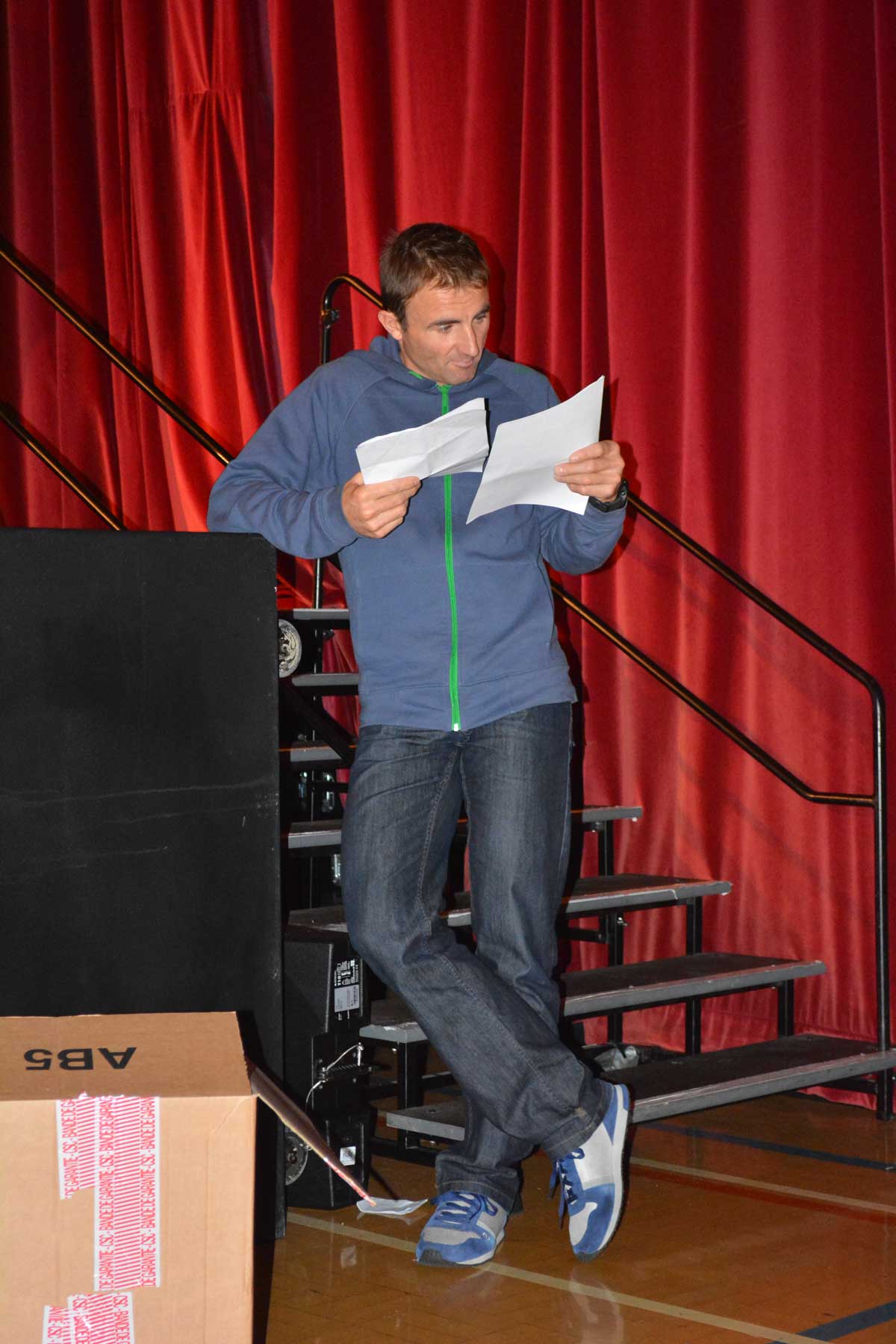 The Sunday morning slots can be something of a graveyard shift as people struggle to recover from the excesses of the Rab Party and and increasing amount of free, live music, options but Jon Griffith packed screen one for a wonderful 2 hours of thrills and adventures covering a decade at the top of his field as an adventure photographer. Coinciding with the release of his book Alpine Exposures Jon traversed the planet with a series of stunning images on screen, each accompanied by the story behind the picture. The delivery was entertaining, funny, humble and understated but above all made the audience think. Explaining how he realised that to be the photographer he wanted to be he needed to morph from a punter to a top-notch alpinist the audience followed his journey from the Alps to the Greater Ranges. Put simply, the Sunday morning session couldn't have been in better hands. 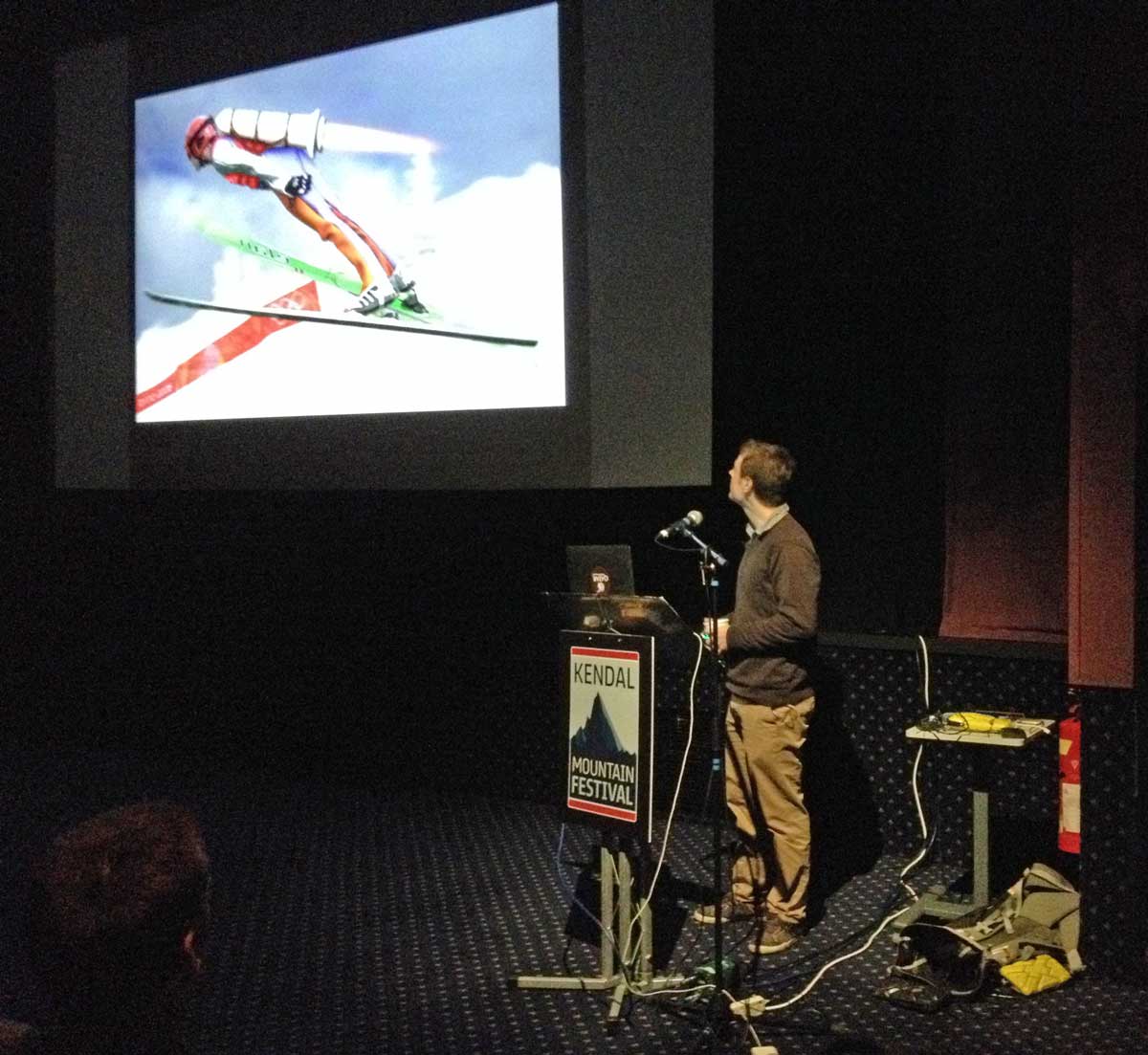 We'll be releasing some more in depth reviews on individual films from this year's festival over coming days but, in  short, the standard was exactly what you'd expect of the world's leading mountain festival. The breadth of content covered almost every aspect of adventure and the overall average technical quality just gets better year on year. Some of the categories for the film passes were a little unexpected with Adrenaline Films apparently being 50% running with a short slack lining filler and some confusion over where to collect tickets for the school venue, but with multiple screening across multiple days there was usually an option to catch any film you really wanted to see. 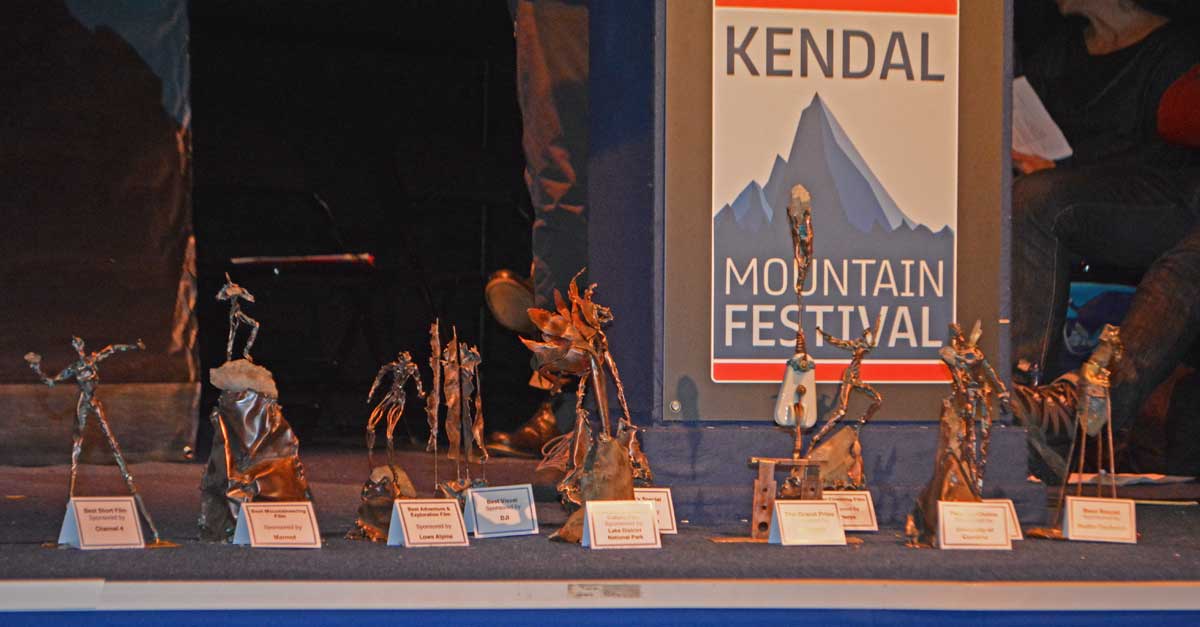 Back in 2008 Remy Tezier carried off the coveted People's Choice Award, since when it's been an annual duel between the heavyweights of UK adventure filming, Al Lee and Paul Diffley. Behind the scenes has often been a man who's spent 18 years in the industry and in 2014 he stepped into the limelight with his first film in his own right and broke the Lee/Diffley monopoly as this year's award went to Ian Burton for As The Crow Flies. Telling the story of the first ever Lands End to John O' Groats in a straight line As the Cow Flies followed the Beeline Britain attempt. Given the nature of the challenge there was no option for reshoots, everything was filmed live; day and night, at sea in a kayak or through the back of a van through the streets of Glasgow. In the same way that last year's winner, Distilled, had a sense of achievability to the average "man on the hill" As the Crow Flies combines inspiration with a sense of an adventure within the grasp of the audience - but it would require training, determination, endurance and more than a little fortune. In winning the award the film will undoubtedly provide inspiration to a host of producers and directors and a reminder that real time recording is a powerful tool in the right hands.

Where Walking Took Me

There was good and not so good at KMF 2014, but overall the good won the day by a very healthy margin. That may sound a bit unsurprising but in past year's I've not been short of things to criticise, whereas this year the gripes are smaller and the smiles are broader. The traditional crush as the main theatre was preparing to open its doors seemd a little lighter than previous years and somehow the schedule seemed a bit easier in terms of getting from venue to venue. Potential issues, like getting from Metanoia to Ueli Steck instantaneously were addressed, with the Metanoia audience advised to set off straight after the film rather than waiting for the Q&A. As a member of the media the difference from last year was both heartwarming and enabling in the way we were treated. We were constantly informed of the schedule for photo opportunities at the Boardman Tasker and KMF awards and given  early access to find a suitable position from which to get photographs. The Media IDs saved shuffling through a wad of tickets and the end result was for the first time the festival experience was one of enjoyment rather than just pure hard work.

Moving the awards from Sunday to Saturday was a strange decision and one that received a mixed reception around the festival. While knowing the winners on Saturday allowed people to plan better for the Sunday it did mean that by the time Ian Burton was announced as the winner of the People's Choice a lot of people had gone home. It would have been good to see him take his rightful place in the full awards ceremony alongside the other producers, but obviously this would have restricted the vote to those around on Friday and Saturday only. The awards themselves will always be controversial and opinions will sway one way then another. By their nature the awards and subjective and as many will agree with the choices as disagree. 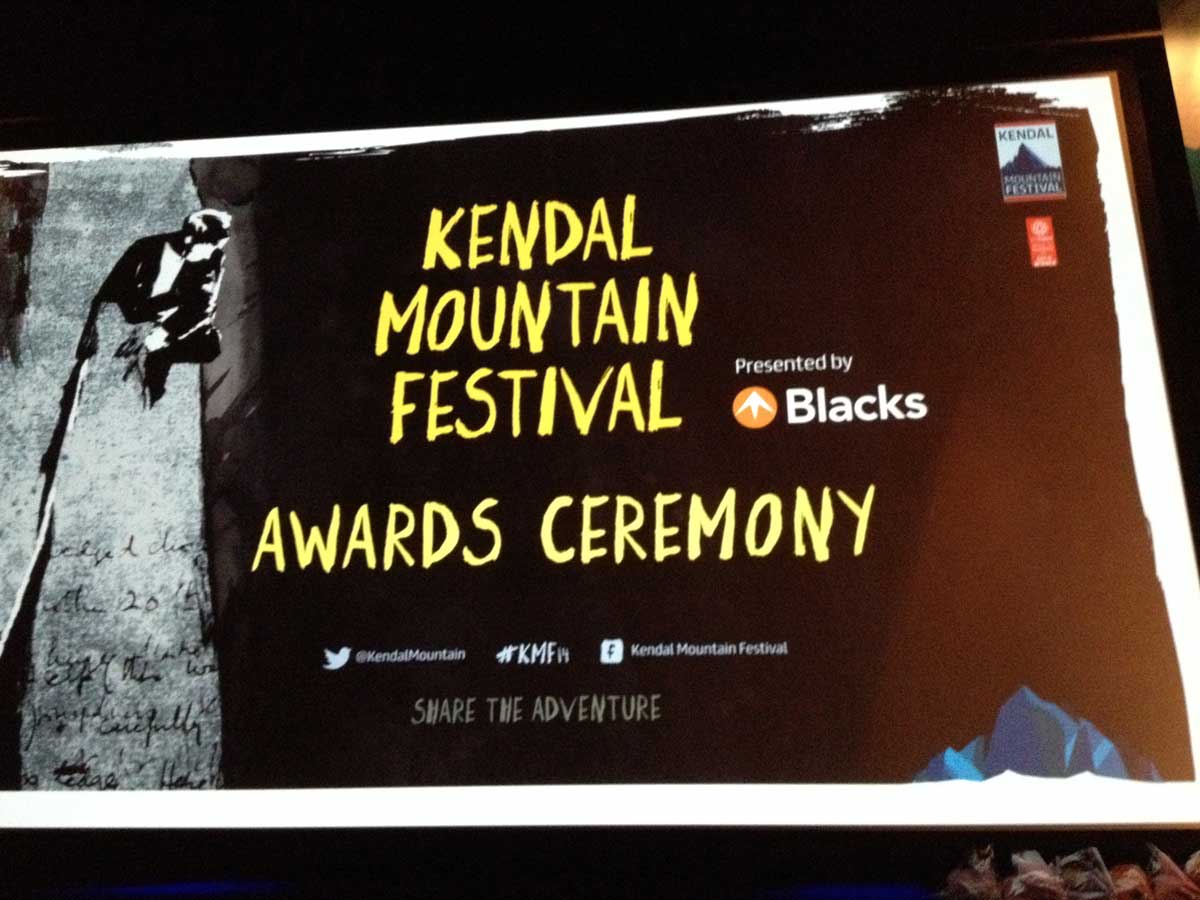 Andy Kirkpatrick delivered a performance of pure genius in presenting the first two awards, Ueli Steck had the whole festival talking, John Porter took the acclaim he richly deserved not just for his book but for an outstanding legacy and to have a terminally ill Jeff Lowe attend in person was an honour felt not just by the organisers but by anyone fortunate enough to be there for the UK premiere of Metanoia. Redemption, the James Pearson Story from ot Aches was a highlight somehow overlooked but is a very powerful film and the Arts and Literature sessions were the best yet. KMF seem to have picked up on the Sheffield Adventure Film Festival focus on the film industry and fringe events and in the hands of Henry Iddon the cultural side of mountaineering was pleasantly resurgent. Not so long ago Kendal was a necessary evil, in 2014 it was an absolute pleasure. 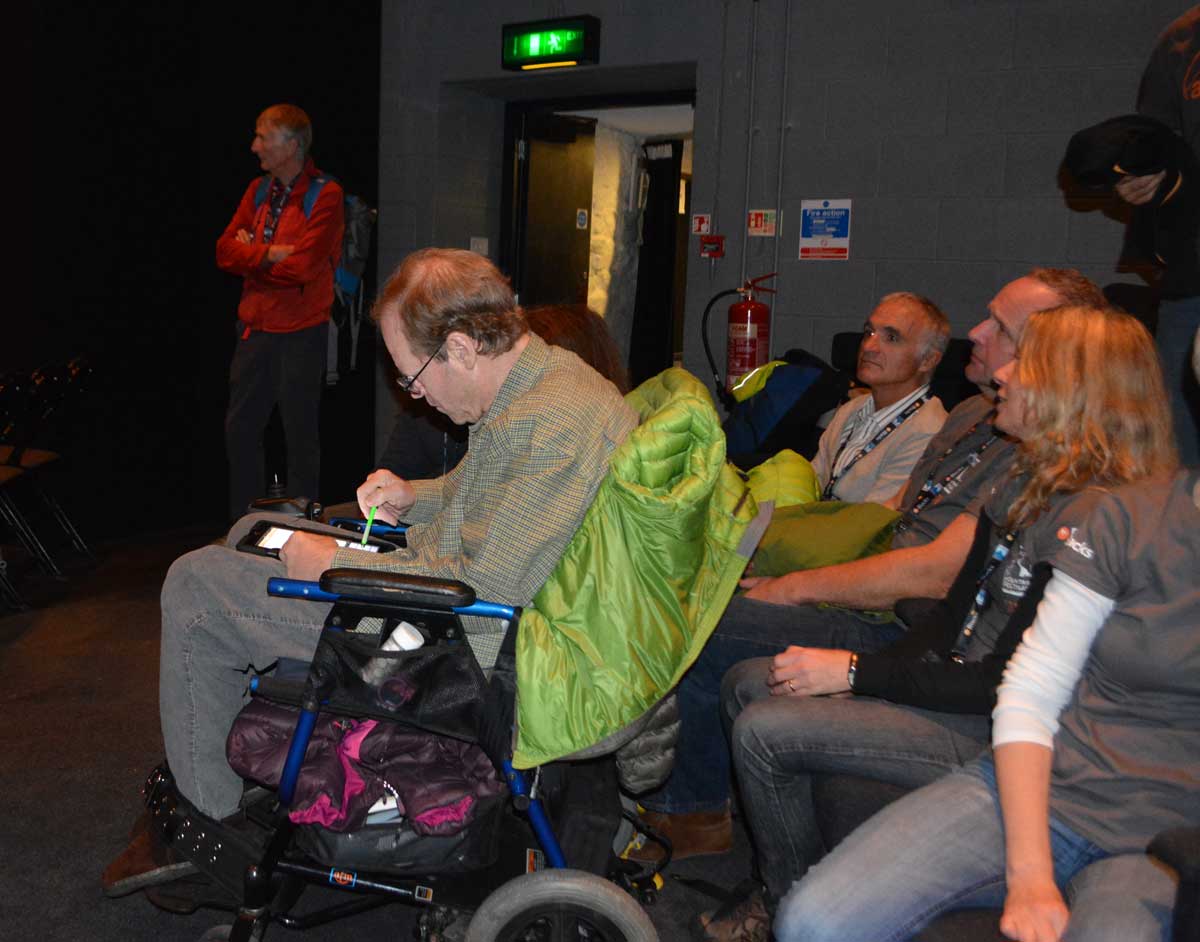