A stacked field and the fastest, “flattest” race of the Golden Trail Series, the 31km Sierre-Zinal, delivered a very similar result on Sunday in the Swiss Alps. Salomon athlete Kilian Jornet ran away from the competition in the second half of the race to capture his record sixth title here (and second consecutive), while Kenya’s Lucy Murigi won the women’s race for the second consecutive year and third time overall.

The famed race that gains “only” 2,200 meters from Sierre to Zinal is set amidst a majestic backdrop that brings five 4,000-meter peaks into view. The thoroughly loaded fields of talented men and women didn’t waste much time admiring the scenery, however.

Though Sierre-Zinal is traditionally a gathering place for runners from various backgrounds and disciplines—from road runners to marathoners to mountain runners to trail runners—Jornet once again proved he is in a class by himself. Over the second half of the race, he attacked the frontrunners and put a gap between himself and runner-up Robbie Simpson of Scotland, a fellow Team Salomon athlete. Jornet’s downhill running was another master-class over the final stretch and he won going away in 2:31:39, besting Simpson by 1:31, as he did a year ago. Kenya’s Robert Surum was third in 2:33:18. Francesco Puppi and Juan Carlos Carera filled out the top-5.

“I’m super happy because it’s always a great race and atmosphere with a big, super competitive field, and this was my best time here,” Jornet said after the race. “I know that when it comes to the downhill, I will be fine, but all these guys have some amazing times on flat ground. For me, it’s normally a struggle on the flat, but today was surprising because I was feeling good on the flats and I could keep with them. The last weeks I have been training more flats and it worked.”

Jornet and a group that included Davide Magnini, Francesco Puppi, Jo Gray, Rob Simpson and Juan Carlos Carrera arrived at the 7 km mark together, and the Catalan said he was feeling good. Simpson started to push the pace in the following stretch, with Jornet and Gray (Team Hoka) keeping contact.

“After Chandolin I was feeling good and I pushed the pace,” Jornet said. “It was me and Robbie battling together until just before the Hotel Weisshorn, where I took the lead. He is a really good runner and it’s a race in which all the moments are tense. You cannot rest for a second. You can have a bad moment anywhere, so you need to fight until the last meter.” 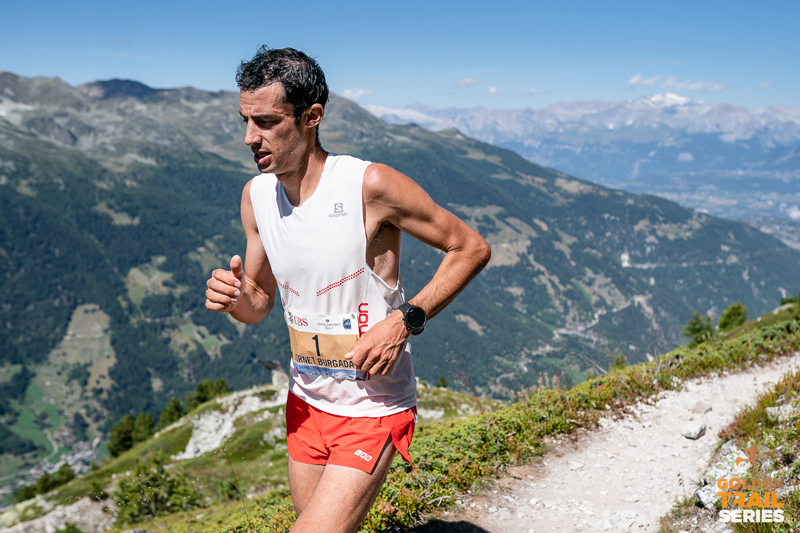 The women’s race was a repeat of the 2017 edition, with the top two places going the same way they did a year earlier. Murigi moved to the front early on and never seemed in much danger of being overtaken. She was the only women to break the three-hour mark, finishing in 2:57:54, three minutes and 35 seconds ahead of Germany’s Michelle Maier (Team Adidas). Swiss athlete Simone Traxler was third on her home turf. 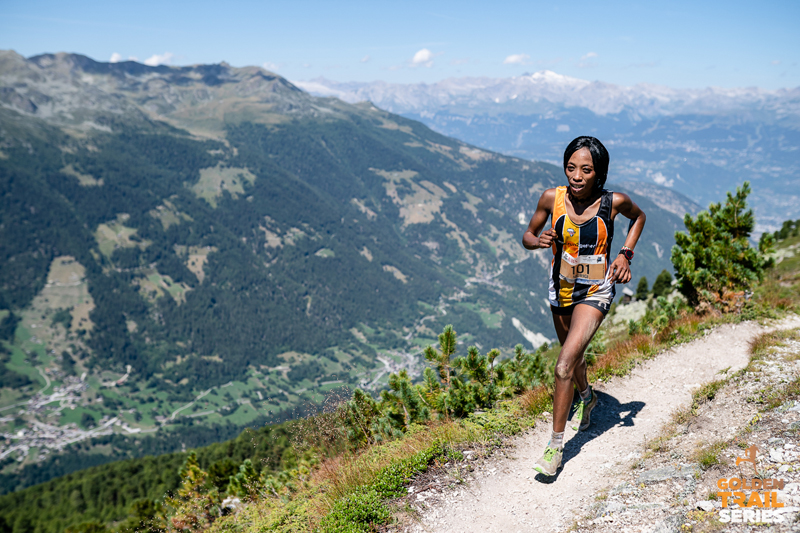 Team Scott’s Ruth Croft of New Zealand solidified her standings in the Golden Trail Series with another impressive run to finish fourth. In fifth was Elisa Desco of Italy, while Salomon athletes Megan Kimmel (6th), Eli Gordon (7th), Ida Nilsson (8th) and Laura Orgue (9th) were competitive again, with Nilsson besting Orgue in a sprint to the line.

The Golden Trail Series doesn’t take a break this week, with the next race taking place this coming Sunday at the Pikes Peak Marathon in Colorado. Another strong field with step to the starting line for the highest altitude race of the season.

ABOUT THE GOLDEN TRAIL SERIES

The Golden Trail Series combines five of the most iconic “short-distance” trail races on the planet into a dream tour for both athletes and fans. A €100,000 prize pool will be shared equally among the overall top 10 men & women at a Grand Final at the Otter Trail in South Africa in October. Each of the top 10 will travel with a friend or partner of their choice for the trip of a lifetime to compete for their chosen cause or charity.

More in this category: « The 2018 Heineken Race to The Tower Jasmin Paris dismantles Spine Race records in epic Pennine Way run »
back to top