In fact, I wouldn’t normally stop for lunch.

However, sat at 2340m at the Cabane Bella-Tola, overlooking the 3000 meter Bella-Tola mountain itself, and further afield the ‘Couronne Impériale’: the Weisshorn, Dent Blanche, and the iconic Matterhorn, their jagged peaks poking out above their glaciers, I allow myself a bit of decadence. After all, I’ve just completed a 12km trail run with a vertical gain of 1000 meters. And its not often that I get to spend several days running and hiking beneath Switzerland’s highest peaks, weaving in and out of wildly beautiful valleys, breathing in the clean mountain air. 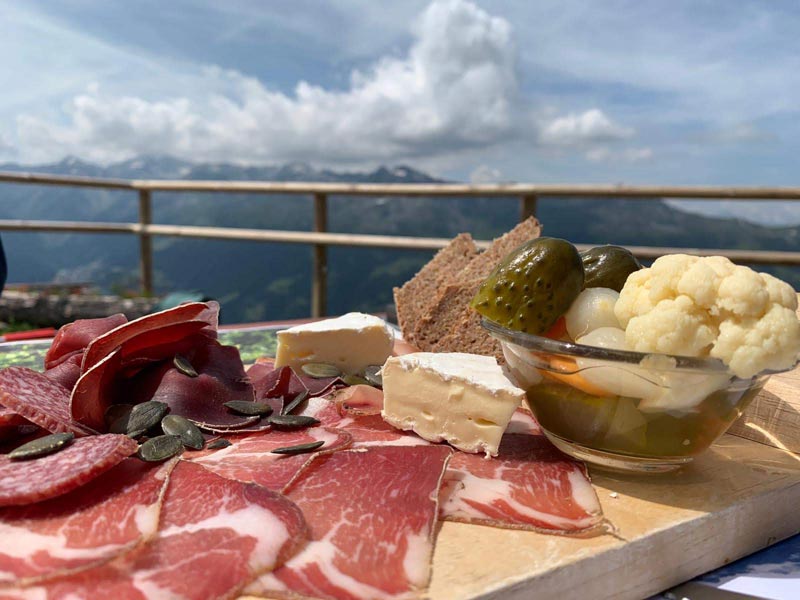 And it’s also not everyday I get to run with the likes of Jules-Henri Gabioud from AlpXperience, a local trail runner and coach… oh, and a winner of the Tor des Géants in Italy, a 330km and 24000m vertical race, considered one of the toughest endurance tests in the world.. 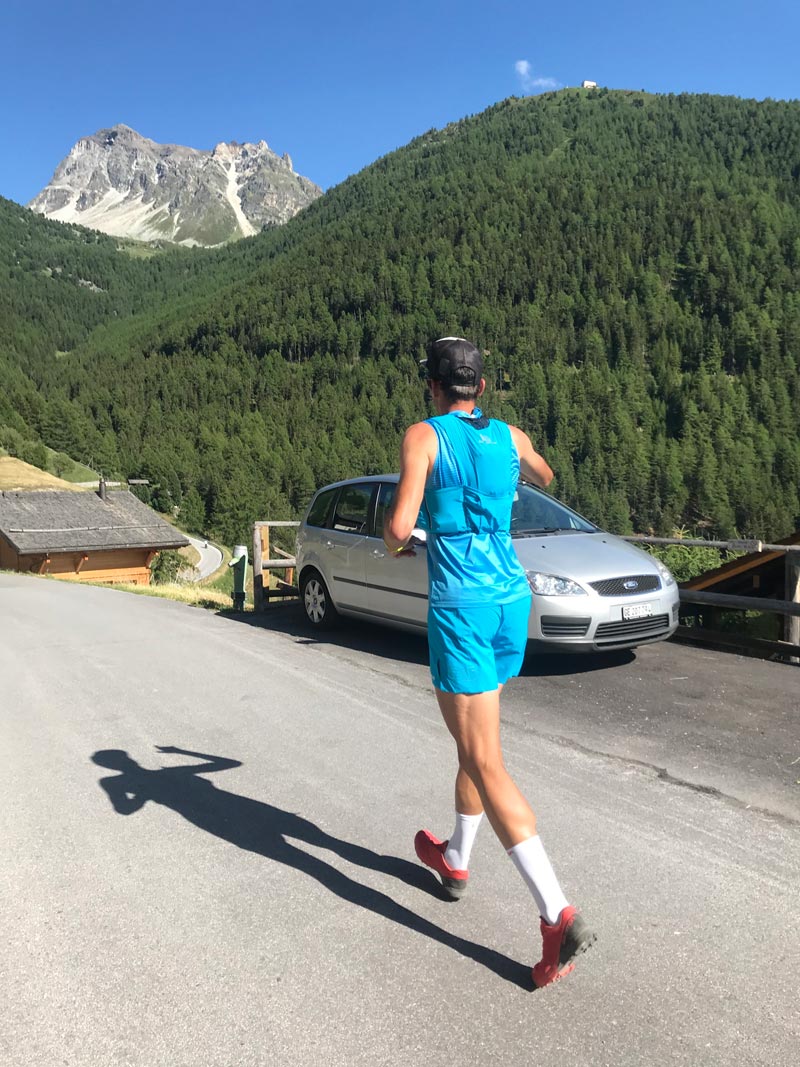 Hailing from the Swiss village of La Fouly, near Verbier, Jules-Henri is a real product of Valais; with legs like a thoroughbred racehorse he easily bounds up the trails he knows so well.

Jules-Henri is also a twice winner of his home race, the 111km Trail St. Bernard. He says it’s one of the best races in Valais, long and beautiful, one of the most technical and steep races there is.

I ask if he ever takes part in shorter distances.

Despite this, Jules-Henri says he’s not a pro runner, but a ‘pro guide’, and he only likes long tours where he can enjoy ‘lots of the mountain’. He tells us he has a 100km race at the weekend,  so the morning's 12km run followed by a 10km after lunch is a rest day for him.

I however, am concerned. I have the Eiger Ultra 51km at the weekend, so this week of trail running means zero taper for me. “You will be fine,” he says, “just don’t go all out on the downhills as it will destroy your legs.” This will be difficult, I think, as I’ll be getting a taster of the epic downhill that concludes the iconic Sierre-Zinal or “Course des cinq 4000” race tomorrow, a beautiful 31km mountain race with breathtaking views held every August.

We set out on a short run from the village of St-Luc along the Trail du Bisse, a ‘gentle’ 7km to get the legs moving after my 4 hour train ride to the Val d’Anniviers.

Starting in the village we pass by some alpenhorn musicians tooting their gigantic wooden pipes at the village fete. 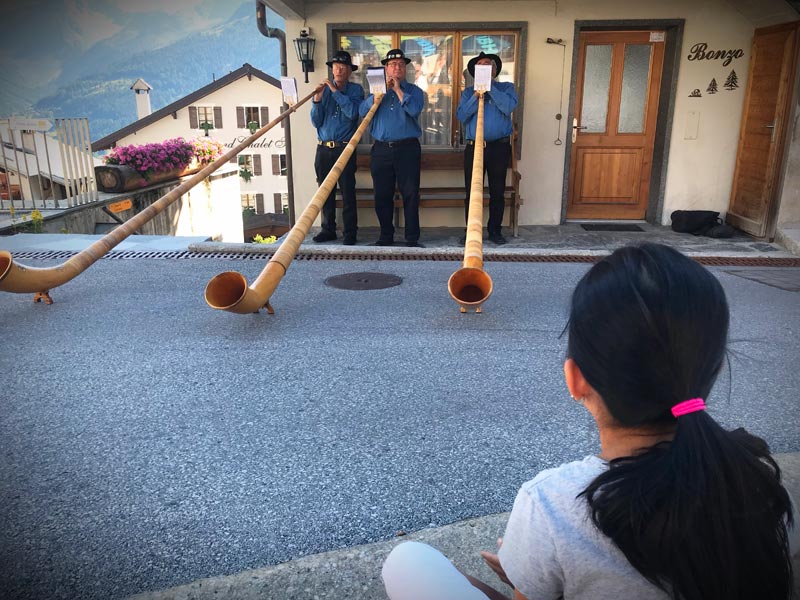 We then pass the funicular station and some cow pastures, to the start of a gentle ascent to Gillou, at 1829m.

Climbing the path that leads to the Hôtel Weisshorn, where we will stay the following night, we begin a succession of small climbs and descents in woodland alongside the bisse (ancient irrigation channel), accompanied by a thick smell of pine and the tinkling of cow bells. 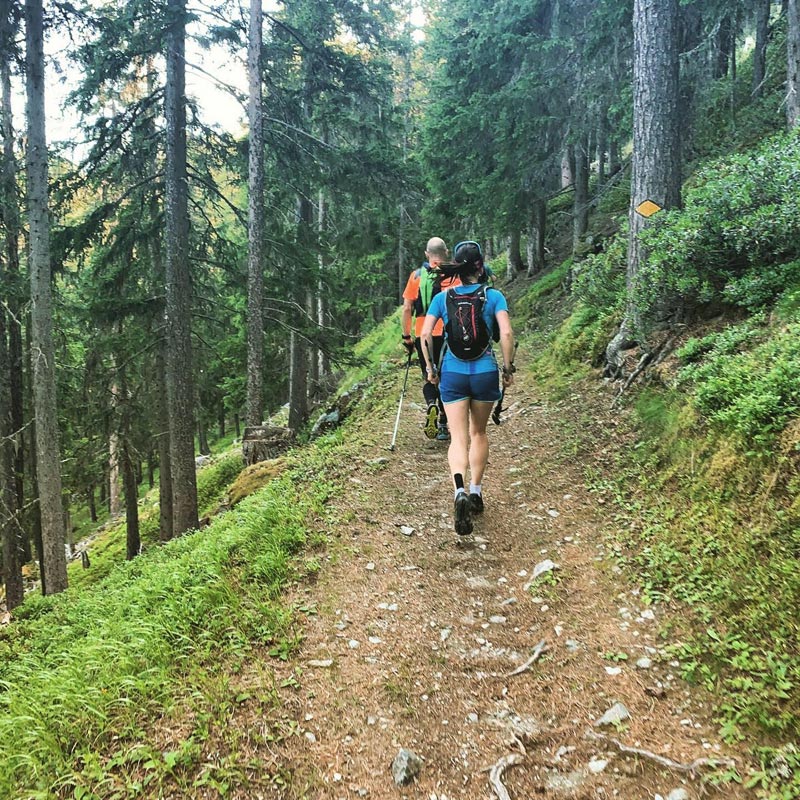 Crossing a waterfall we reach another bisse, which leads to a point just above the village of St-Luc, and a giant wooden chair, to sit and take in the views of mountains pastures and the Hotel Weisshorn high above us, with no sign of the village below. Continuing on, we pass the rails of the funicular system, then take a fairly steep descent back to the village.

"it’s a little story of life itself"

As we run, Jules-Henri gives me some important words, which I did indeed remember as I set off, 5 days later at 7 am on the Eiger Trail.

“It’s about humility. People want to start fast but you must go step by step. If you only see the summit of the race, it will be too long. Respect nature. Respect the runner. It’s a competition, but it’s a race against yourself, not the others. It’s difficult as they want to pass you, but it’s important to run your race.”

So what is it about trail running that appeals to Jules-Henri?

“Its 20 percent heart 20 per cent legs and the rest is your head,” he replies. 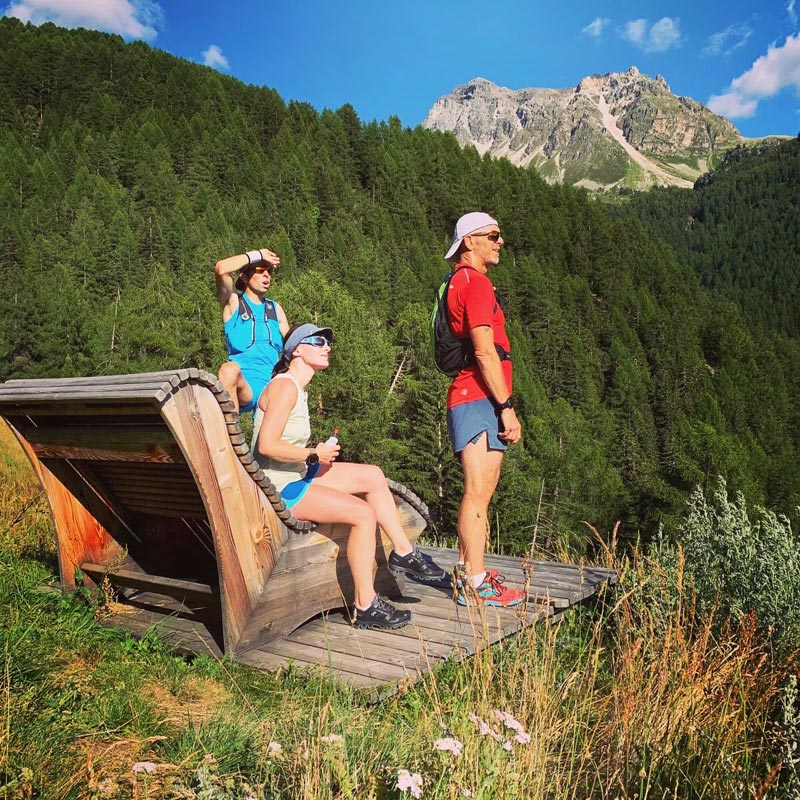 “The trail is a pleasure. To see a new region, new mountains, to see the sun rise. People say to me, ‘why do you run you as you don’t see the landscape?’ but I say, ‘I see it from the start of the day and I see it all day.’ Life is like a trail, there are good moments, bad moments - it’s a little story of life itself.”

“For me when it gets hard, I search to see the mountain, and remember, we are lucky to be free and in nature. Even today, it’s only a 7km run, but we are in the forest, there is lots of oxygen it’s nice.” 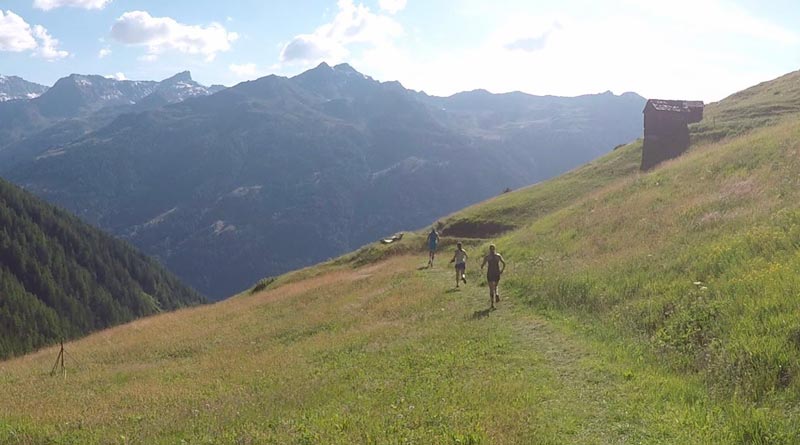 Back at the hotel Hotel Beausite in St-Luc we discuss tomorrows plan over a post run drink of Rivella Blue (only to be found in Switzlerland sadly).

From the Val Anniviers, there are many interesting trails to follow and we are going to sample the 16km, 1000m vertical Trail St Luc Chandolin, one of five beautiful “Trail Hotspot CH” routes and part of the famed Sierre-Zinal race.

By the end of the year, says Jules-Henri, there will be a map with trails for the whole of Valais – “amazing”, he says as “20 years ago, we didn’t know about trail running.” 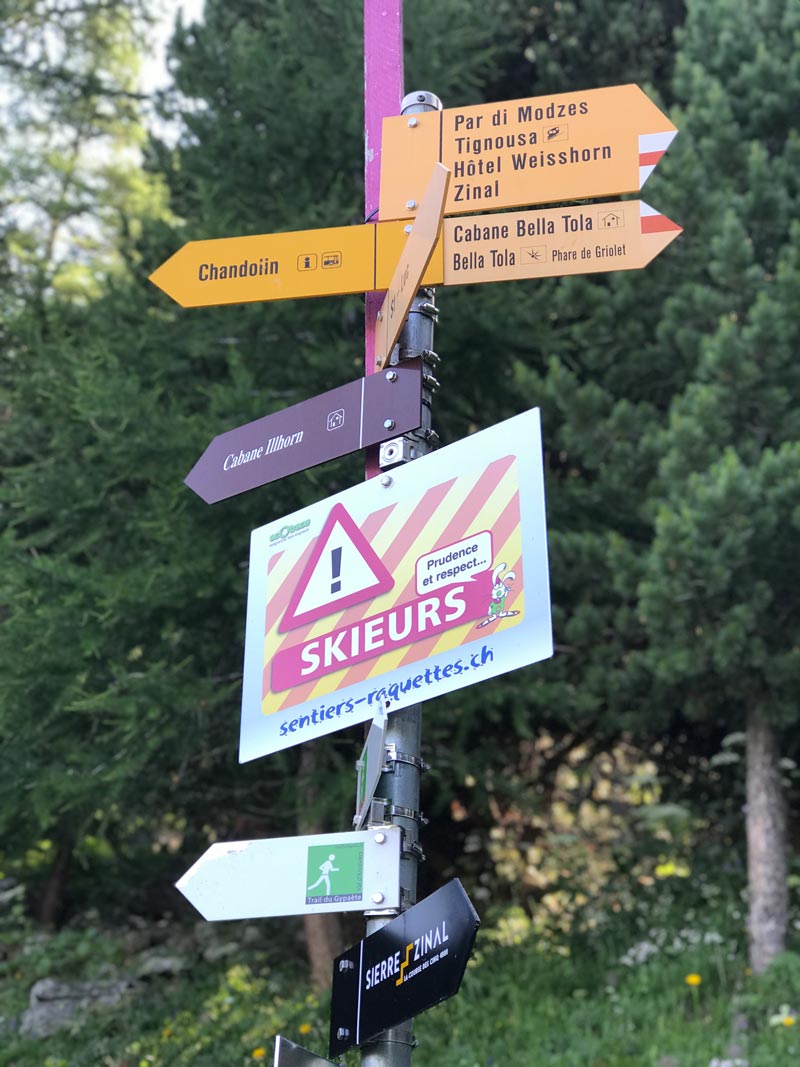 The next morning , armed with my new waterproof trail shoes, from Swiss-engineered ON–Running, with their huge lugs and great grip I feel ready for any sharks ready to trip me up.

As we begin the trail to lunch at the Cabane Bella-Tola, Jules-Henri, gives us a little lesson in tackling climbs. Running alongside a walker he demonstrates that, in fact, in terms of speed, there is no difference. But in terms of energy spent, it’s a big difference.

There are two ways of ‘race-walking’, he explains: on wider, less steep paths you can take longer, flatter steps with your poles moving in time with the opposite leg, like Nordic walking. But when you want to go fast on a technical ascent, you can take smaller steps, on your toes, with poles moving together every second step. Either way, it’s an active way of walking. 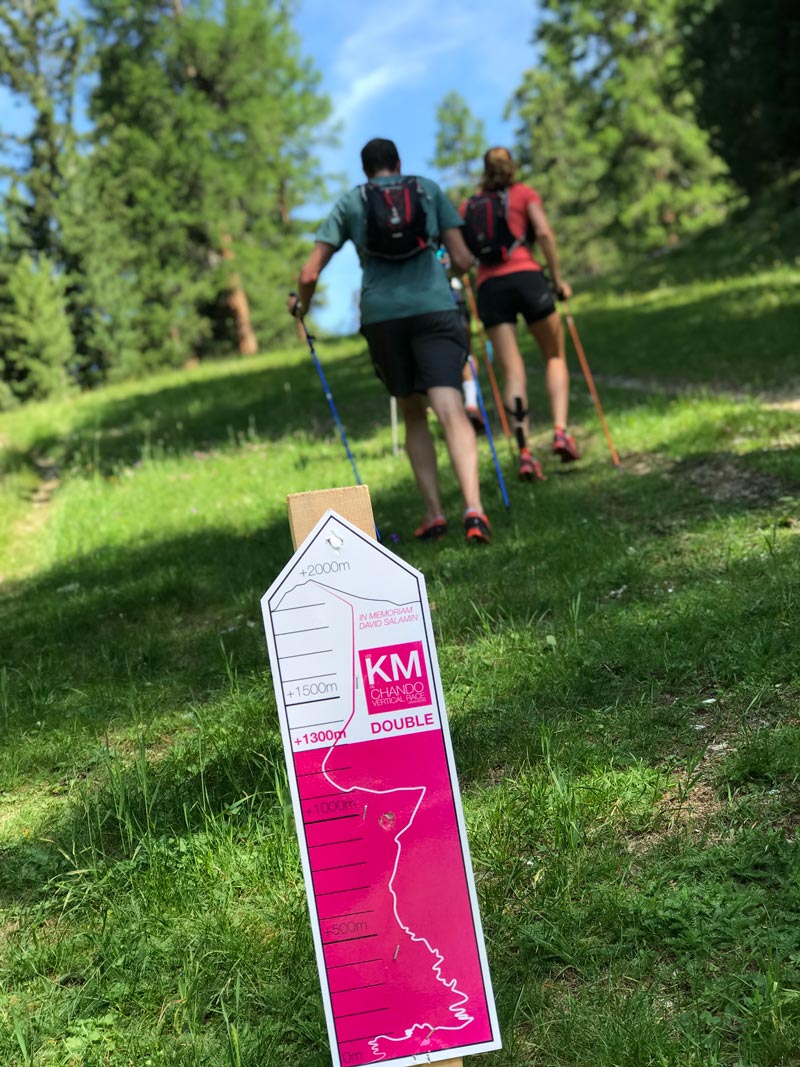 He advises against super light carbon poles as he tends to break them on the downhill (but he is well over 6 foot tall, and thunders down them like an avalanche). He also advises against putting your hands into the straps for a descent, but says they are a good way to put extra power onto the stick on the way up. And as for length, as long as your arm is at 90 degrees, they are fine.

As we head up a small rocky singletrack alongside the double KV de Chando, he catches me trying to keep my stride in line with the (much taller) others,;“smaller steps Katy,” he says, “or you will get tired.”

At the top of the steep section, we stop to refuel and he explains the trail sign posts, which are coloured like a ski grade, in terms of difficulty. 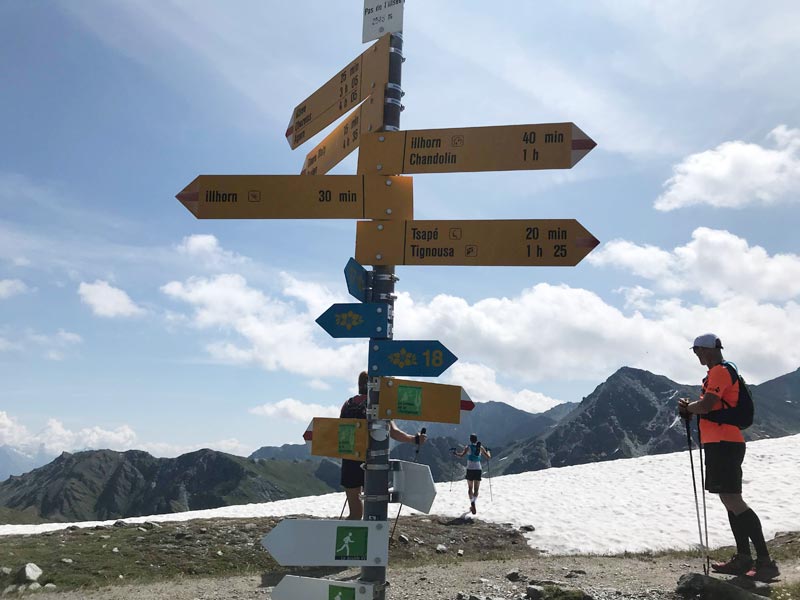 We then reach a downhills section just past the chair lift le Tsape 2470m on the route of the Chenegouga educational trail, and we practice some downhill exercises.

“If it’s a short race, then ok, go fast. But if its long you must manage the downhill, with small light steps. You must relax and focus and concentrate only on your feet- it’s not the moment to be looking at your watch or drinking,” he says, flinging his arms as he bounds down the hill.  “Like this I can go down for two hours easily”. 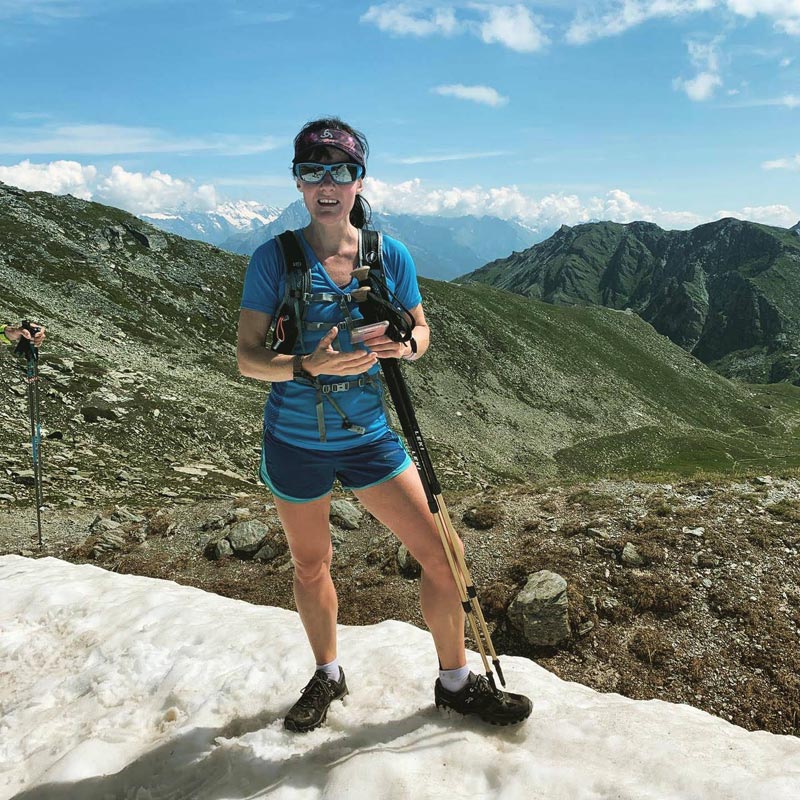 I give it a go, and he advises me not to try and zig zag the track, as you would skiing, but to use the power of my quads and go straight down, looking 3 metres ahead, or further if it's flatter. Fine, if you have "racehorse" legs, I think to myself. 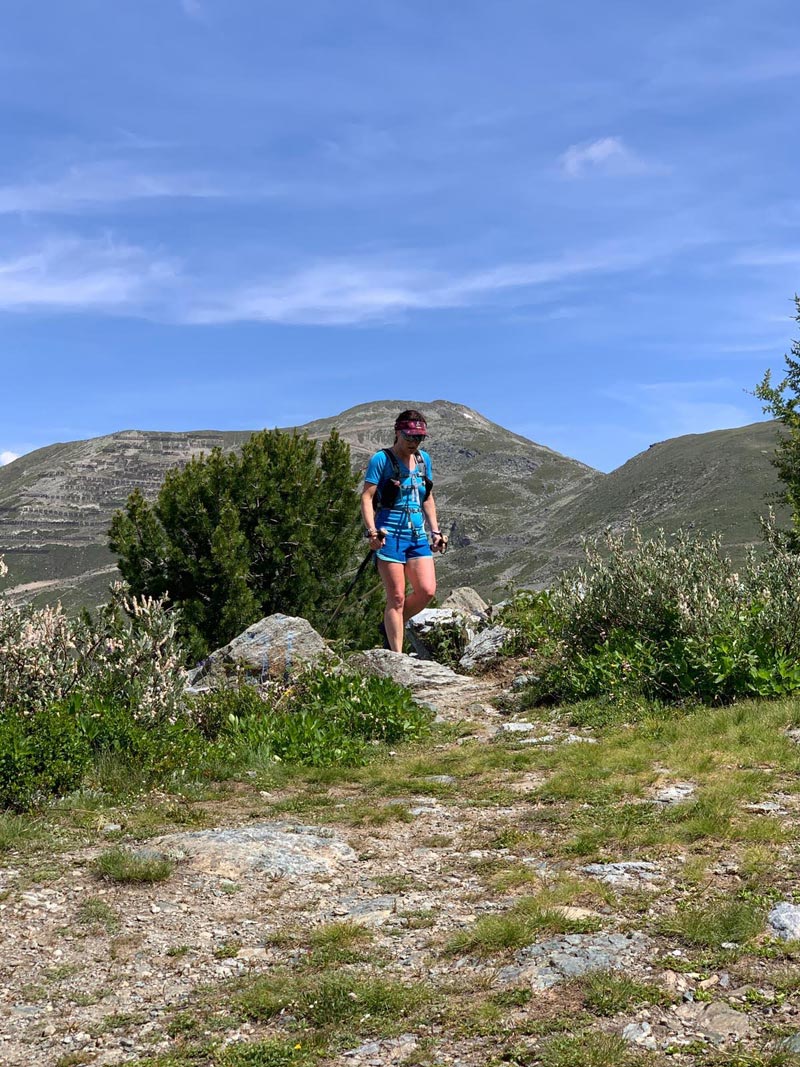 Following lunch at the Belle-Tola, I opt to take the main 5/6km walkers path to the 130 year old Hotel Weishorn, perched at 2337m to save my legs and have a bit more time relaxing at the rustic hotel

The rest of the group, with no ultra-race ahead of them, follow the Planets Trail and part of the Sierre-Zinal race to the Hotel Weisshorn at a distance of 8.5km/5.3miles and a Vertical gain of 550m+/1800ft

Reuniting at the Hotel Weisshorn, Jules-Henri gives us a quick talk on nutrition, as its important, he says, “to finish a race with a good feeling, and ready to eat a raclette, rather than feel sick.” He suggests avoiding whole grains, cooked fats, dairy products and raw fruit and veg for two for three days before the race to prevent digestive problems- so rice polenta, pasta and potato are on the menu. Alcohol is also ok, just don’t go crazy. 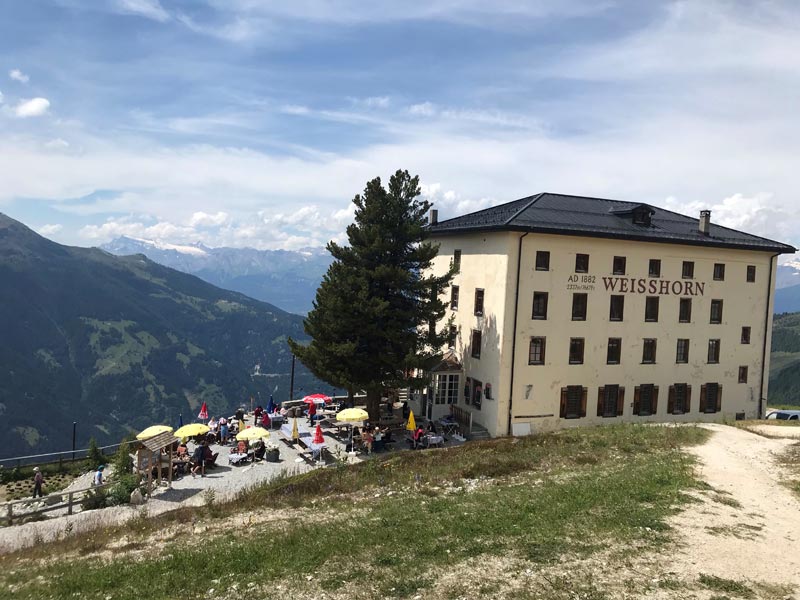 The day before the race, he says, don’t eat too late, or too big a portion, and eat non solids, just 2-3 hours before a race. Then during the race drink small quantities regularly. “But water is not enough, you need an isotonic energy drink, every 10-15 minutes. This doesn’t include coffee!” he declares, “unless you are on the second night of a big ultra. Water and syrup or a bouillon is good. Caffeine, cold drinks, too many gels and anti inflammatories are a bad idea, although go for whatever works for you.”

“When you get to an aid station” he says “only have known products like banana, fruit or chocolate. Beware of cheese, crisps or sausage and only eat in small quantities.”

After the race use the metabolic window of consuming within 4-6 hours after exercise - have a recovery drink ASAP, to rehydrate and avoid cramps. Only then will you be good for a raclette, - and after all, we are in the region that produces nearly 2000 tonnes of it a year!

More in this category: « Montane Lakeland 50 & 100 set for another sold out year Running up that hill - trail running Switzerland's Valais with the pro's Part 2 »
back to top