The road to 4 wheeled microadventure - vanlife in miniature Part 2

Space is at a premium in a campervan, and in a micro-camper you need the lightweight-camper ethos of everything you carry having more than one use. Even taking this into account, once the insulation and lining is in those few millimetres less on all sides seem like metres.

My drawings said with a bed and cooker/sink unit I'd have room to sit comfortably with the bed as a seat, my eyes said differently. I soon found out, though, that the eyes don't always see what's there and if the eyes don't see it the drawings don't reflect it. My eyes saw a vertical half-bulkhead and my measurements, in triplicate said I could fit the required size folding bed with ease, firmly anchored to the bulkhead as well as walls and floor. I say "required size" because thinking ahead to have the vehicle reclassified as a camper - and cheaper insurance, one of the conditions is a bed at least 1.8m long. The thought was a 1.8m bed behind the drivers seat with a folding top to allow storage underneath. By coincidince my local B&Q just happens to sell 44x44mm wood in 1.8m lengths and everything was looking good. 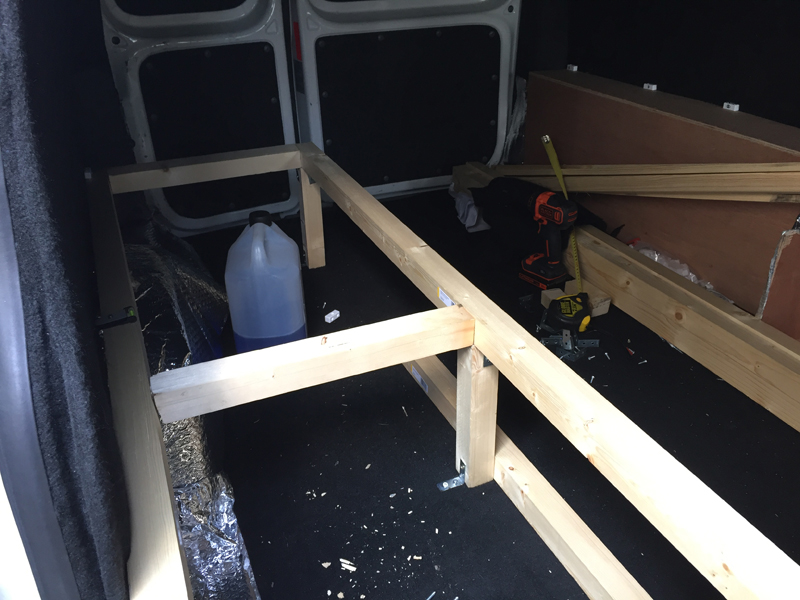 After checking the frame fitted, leaving space at the end of the bed for other plans, everything was well ahead of my early-june deadline. With the 50cm wide base the extension would be 40cm, following the classic slatted style. An upper fram, attached to the main frame with two 90cm piano hinges, allows the sleeping platform to be raised, giving access to the under-bed storage. 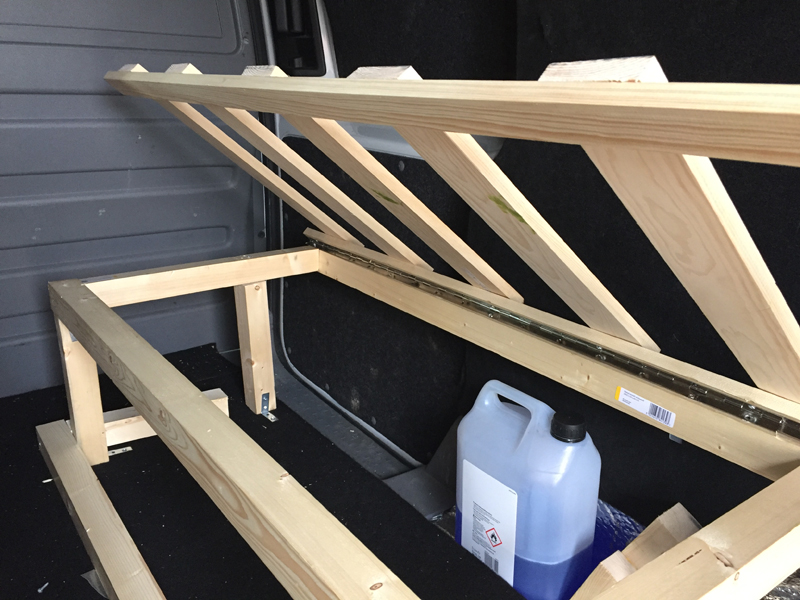 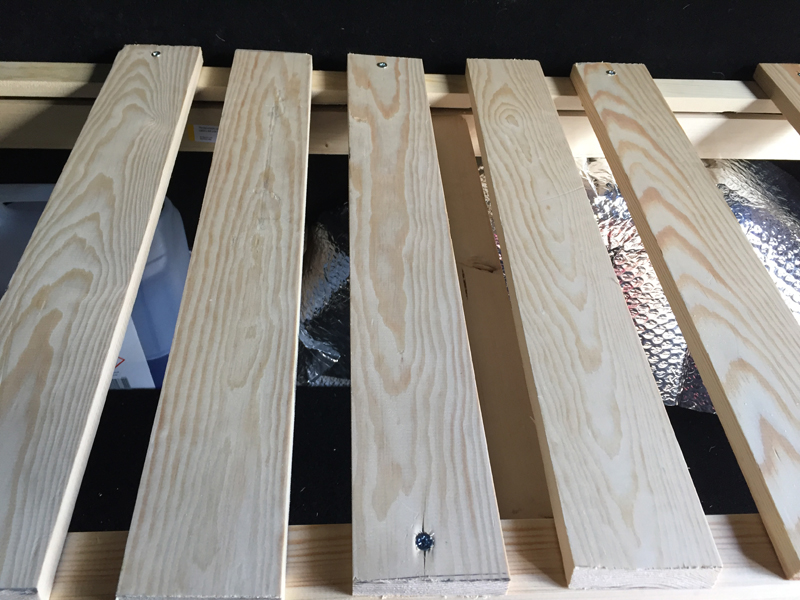 It was at the stage of attaching the top frame, with all the slats, to the base that I realised the bulkhead wasn't vertical and my eyes and measurements had deceived me. The bulhead behind the drivers seat follows the contours of the rear of the seat, meaning the lid wouldn't fully open! Every one of the 20 attachments points had to be undone and the bed taken out. 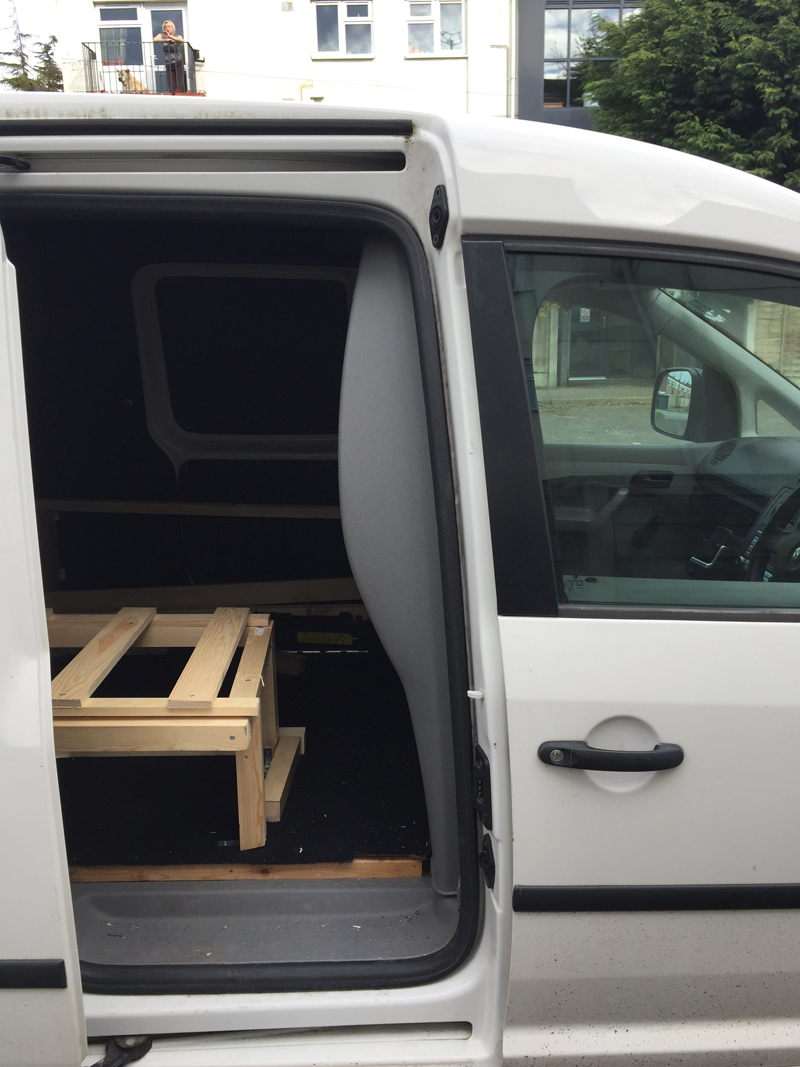 The curve of the bulkhead is easy to see!

With the bed frame already constructed the refit was quite straightforward, remove the wall mounted jack and move the bed 50cm towards the back doors. More important was the way it made me stop, question the whole design and work out my priorities. The idea of a campervan had always been a kind of pre-formed image of comfortable seats that fold out into an equally comfortable bed, a cooker and sink and the power to run both the day to day essentials and the ability to recharge phones and tablets on the road. The limitations of a miniature version, however, mean a lower roof - particulary along the sides. Quite simply, given the height of the wheel-arch covers, the choice was between a "compromise" foam thickness suitable for both seating and sleeping or deciding what I wanted from a micro-camper.

For me the reason for going down the campervan route has always been about a comfortable night rather than a van that replicates home in miniature. I don't plan on hours sat inside the van, it's for sleeping and cooking in. Given those priorities the need for a leisure battery rapidly decreased while the thickness of the foam for the bed/settee rose. To sit comfortably, with a straight back, would mean the foam was limited to no more than 2 or 3cm, but that kind of thickness won't guarantee a comfortable night and the durability would be questionable at best. The ideal sleeping foam, on the other hand, would be the most expensive single component of the conversion and if I went with the 8cm memory foam that's best for sleeping there would be no chance of sitting up straight. Given that my priority was s comfortable bed the compromise came down firmly in favour of thicker foam. 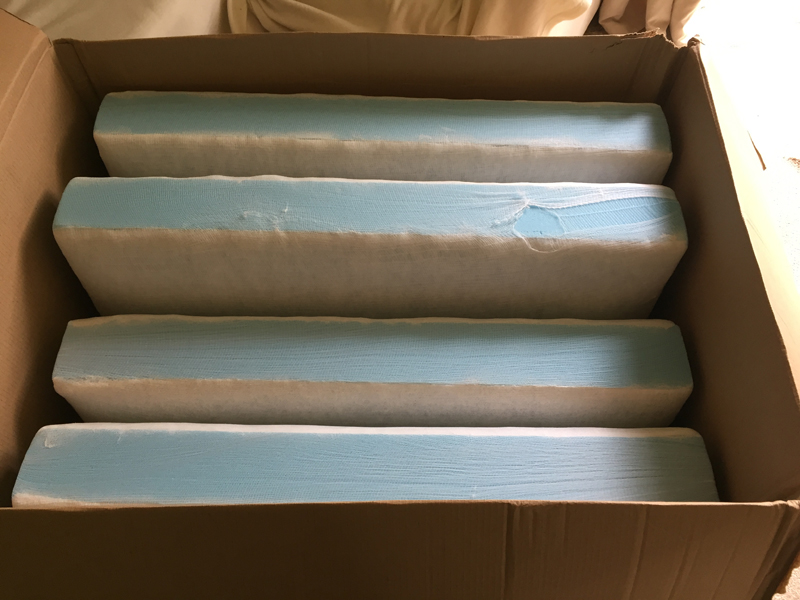 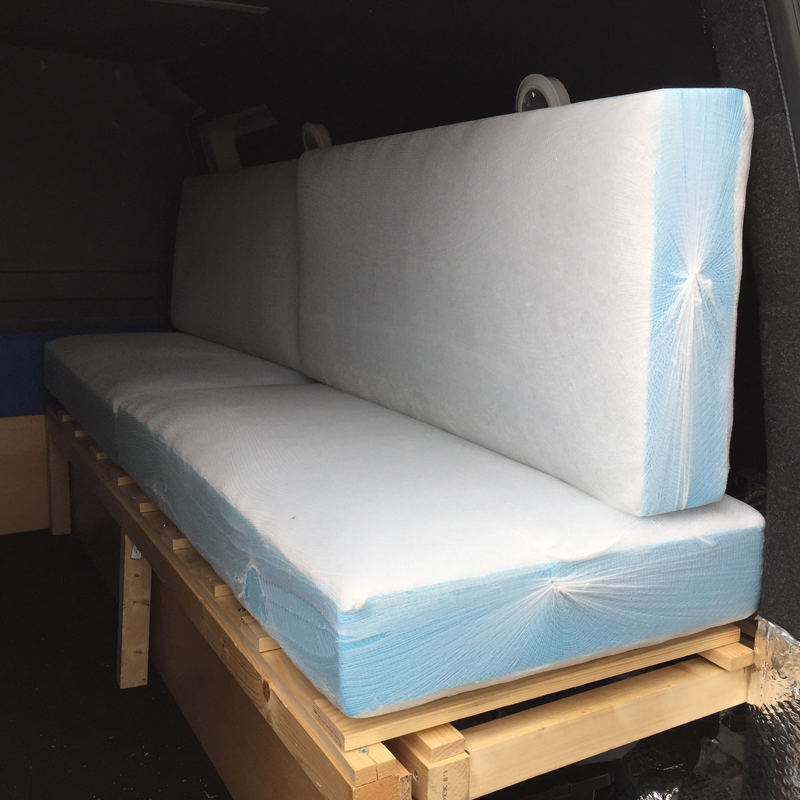 I opted for a fully featured foam - memory foam with a stockinette cover that makes it easier to slide in and out of covers and a Dacron finish that gives the cushions a raised profile - that familiar "plumped" look rather than flat surfaces. The next choice was over single cushions for the seat and back or splitting them in half to have two seat cushions and two back cushions. The decision was simple.....splitting the cushions into two meant slightly increaded cost for the additional cutting but a saving on cushion covers and easier options for accessing the underbed storage. If I'd thought it through in advance I'd have made the upper, liftinmg, frame of the bed in two halves - meaning the storage was accessible in two seperat sections. A winter refurb may well see this implemented for future use.

With a limited budget and a futile search through my contacts for someone adept with a sewing machine the cushion covers ended up being hand sewn. That's 8 hours of hand sewing to complete the 4 foam cushions and let's just say the covers will never be taken as professionally made - but there's no denying it added to the "I made this" feel that was always intended. If I'd wanted a "professional" conversion with factory cushions and units I'd end up with a van than looked like any other, just a little smaller. 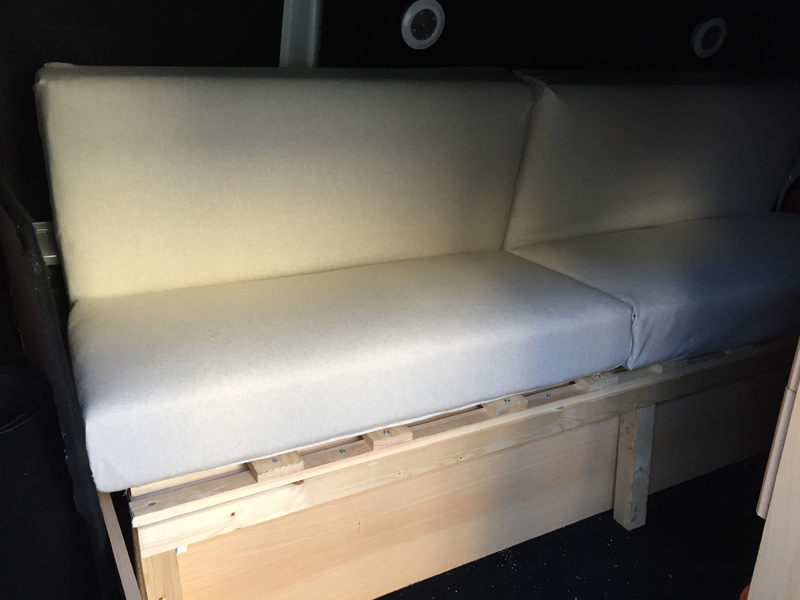 In total the foam and cushion covers ate up £180 of the £500 budget, but at least it meant a decent bed - the main priority. Fortunately I already knew that the other side of the van was going to be at a minimal cost.

The unit that holds the cooker and sink started life as a set of drawers...after 2 house moves the drawers were collapsing and the unit had been relegated to the garage as a stoage unit for tools. At 1m wide they were an almost perfect fit opposite the bed, with room to access through the side door. 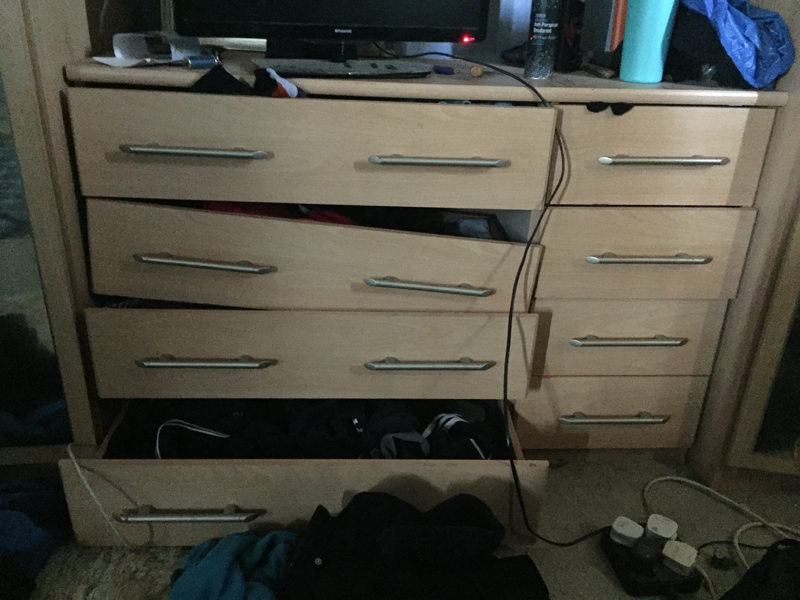 With all bar the second small drawer removed the unit has two compartments, one wide and one narrow. The narrow end was penciled in for the sink and water supply while the wider side would hold the cooker and storage space. 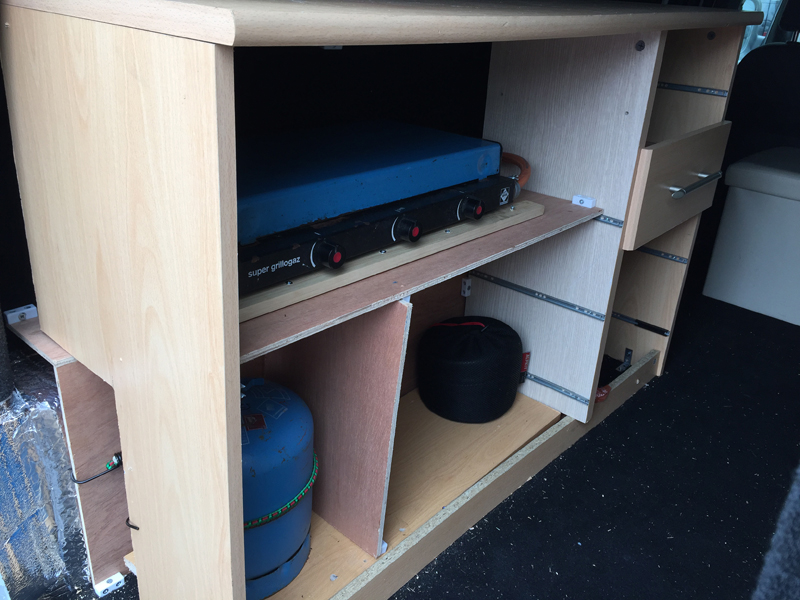 The regulations for re-classification include a "permanent" cooker installation (minimum 2 burners) with the gas bottle secured in its own "box" and vented. Thje precise layout went through multiple changes over a period of a couple of weeks, particularly when the issue of raising the lid, or worksurface, proved as ill thought out as the bed lid started. With the unit in place the curvature of the van and the rear doors meant the lid couldn't be lifted vertically. Fortunately, however, the lessons of the bed had been at least partially learned and the initial construction of shelves and partitions was carried out using plywood. When tweaked and completed the plywood would be replaced by more substantial legths of MDF.

The double burner Camping Gaz stove started life sometime over 30 years ago and had been sat in the garage for 9 years because "it will come in handy one day" and to be honest it was in an awful state. But a quick clean up soon had it ready for use and sitting on the unit shelf, complete with batons to prevent any movement during driving. To give sufficient clearance for the rising heat from the stove the worksurface above has to be able to lift through almost 90 degrees and sit against the wall. This was the a problem at first, but a quick tweak meant the MDF that replaced the worksurface came in two pieces - a narrow strip fixed in place and a main piece that was far enough away from the doors to lift properly. 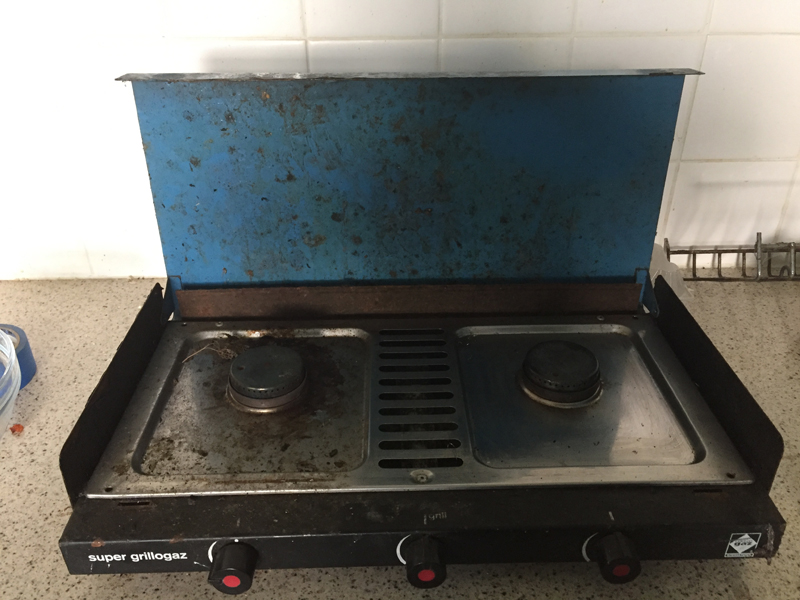 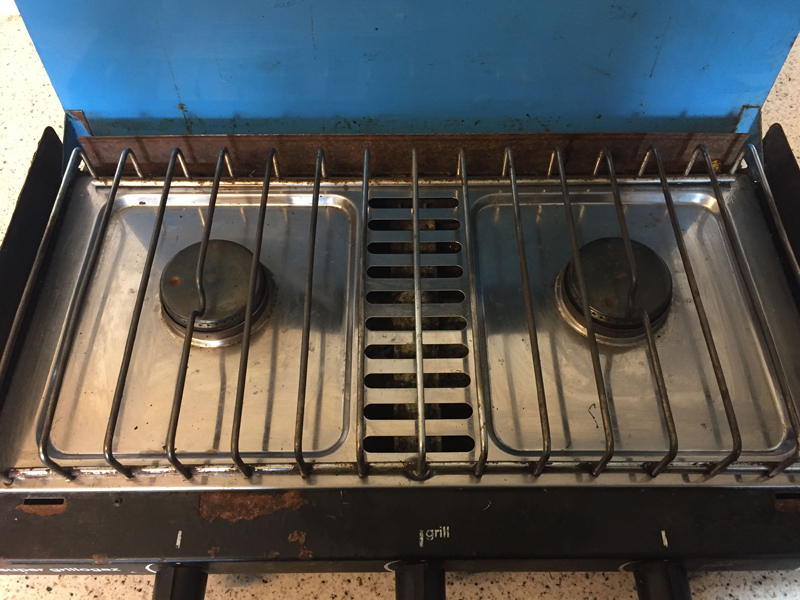 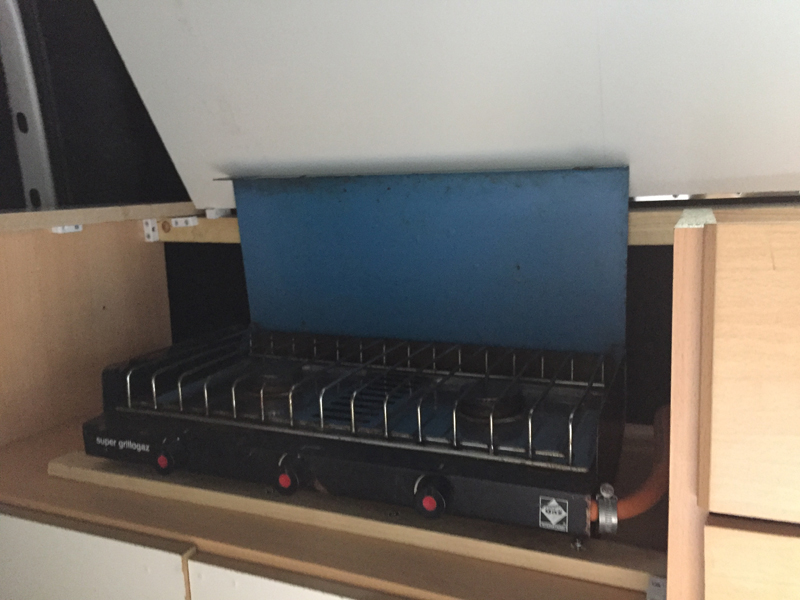 Keeping the "re-use, refurbish, recycle" philosophy of the build the sink started life as a dog bowl, and like the habd-sewn cushion covers it adds that unique personal touch, with a feeling that while Flash may have passed on 2 years before a part of him would always be part of the van.

And so, by early May the "essentials" were in place. 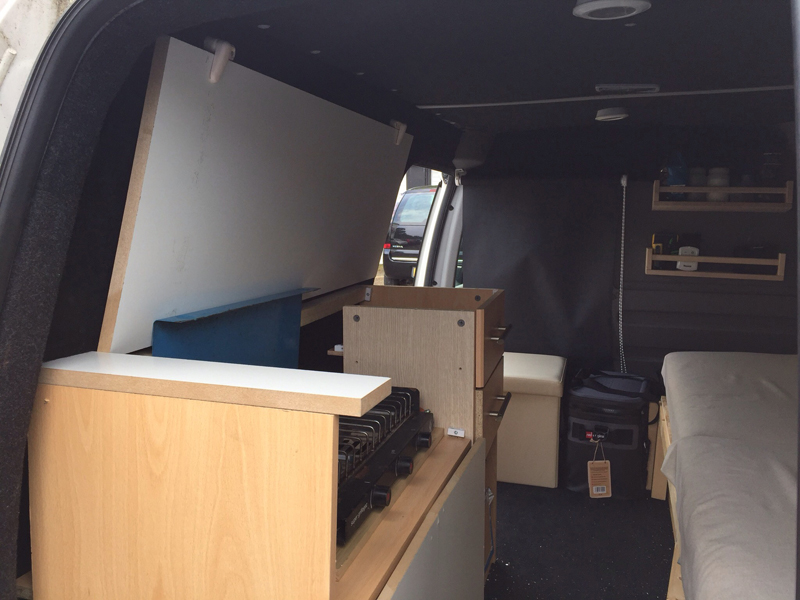 An £8 blackout blind and 3 Ikea spice racks at £3 each were added following a first real-world trip to Castleton, giving protection from the dawn light and an early awakening and storage for food tins, power banks and other essentials. 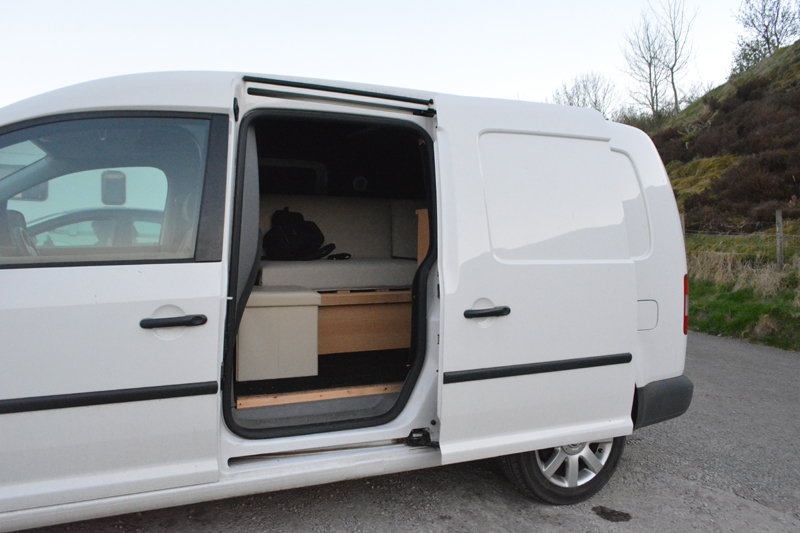 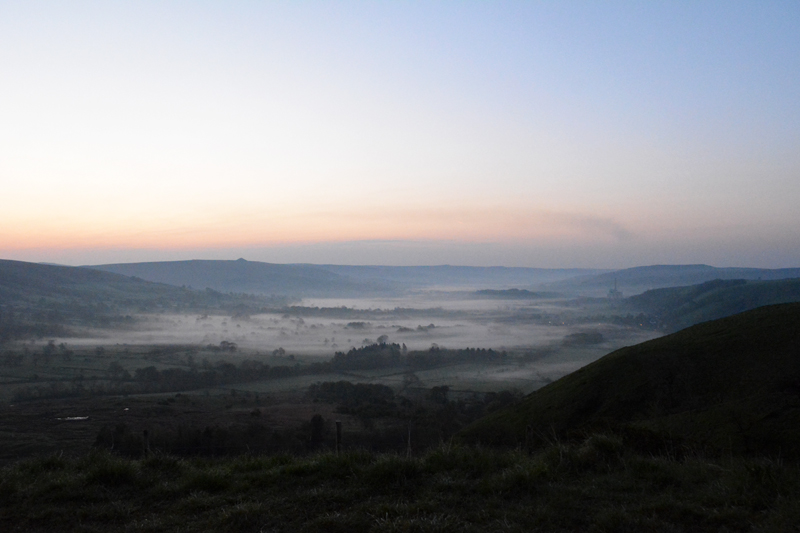 The first outing in a new conversion is in many ways a "tweaking" trip, discovering what works away from the drawing board and what doesn't. One night at the end of the Mam Tor road at Castleton saw an overhaul of the water system - the twin 12lt containers than occupied the majority of the cupboard storage space was overkill and was replaced with 5 litre containers, 2 for fresh 1 for waste, and relocated to directly underneath the sink. The reality is it would take a fortnight or more to need 12lt of waste water storage and the amount of real-estate it occupied was outrageous in such a small van. 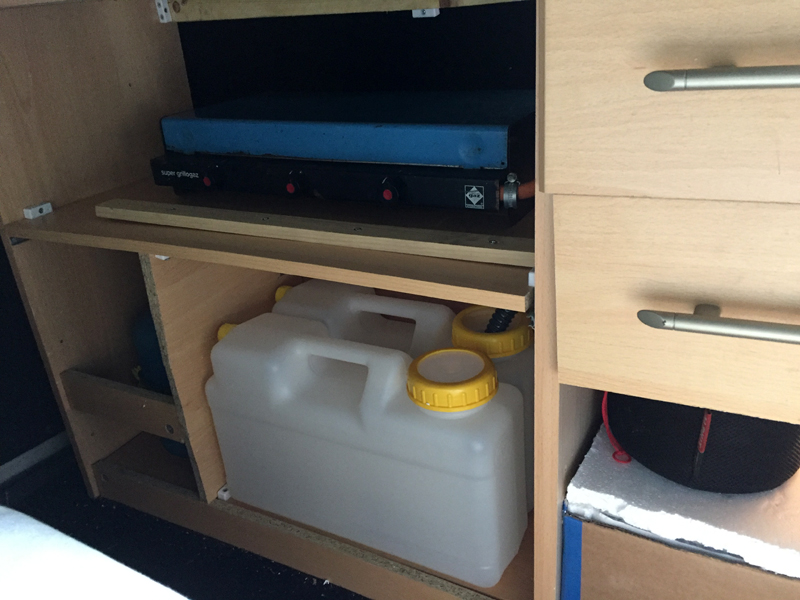 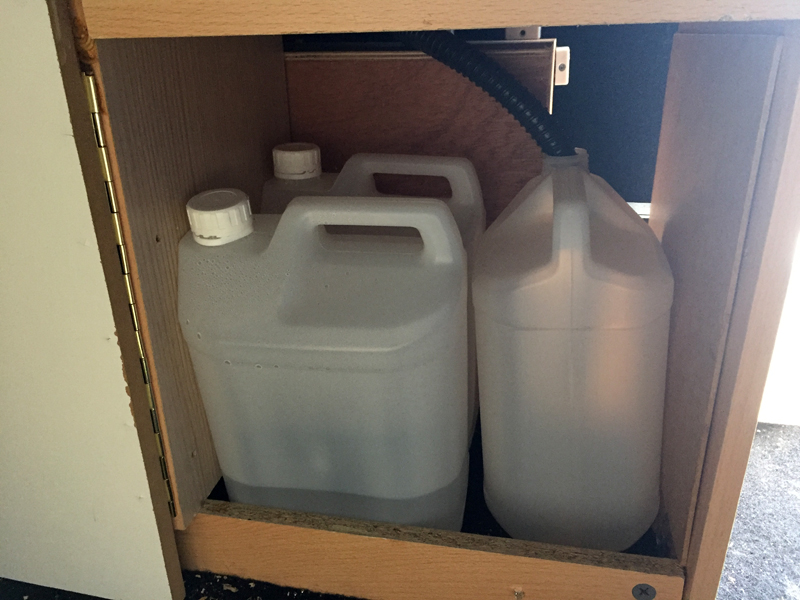 The final part of the construction was the mandatory naming and on May 5th Oleg was fully functional. Perfect - no, but ready to go while the tweaks continue. The 5  multi-LED lights were trimmed down to 2, the doors were finally installed and a Vango Idris II Low awning for the side was added. By early June, with a new Red Original coolbox and a collapsible storage seat for clothes it was ready to debut at Keswick Festival. 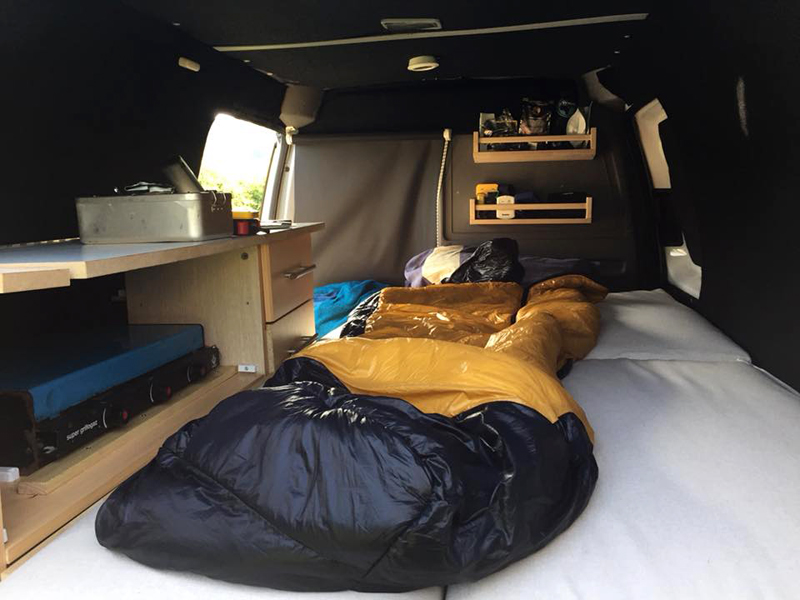 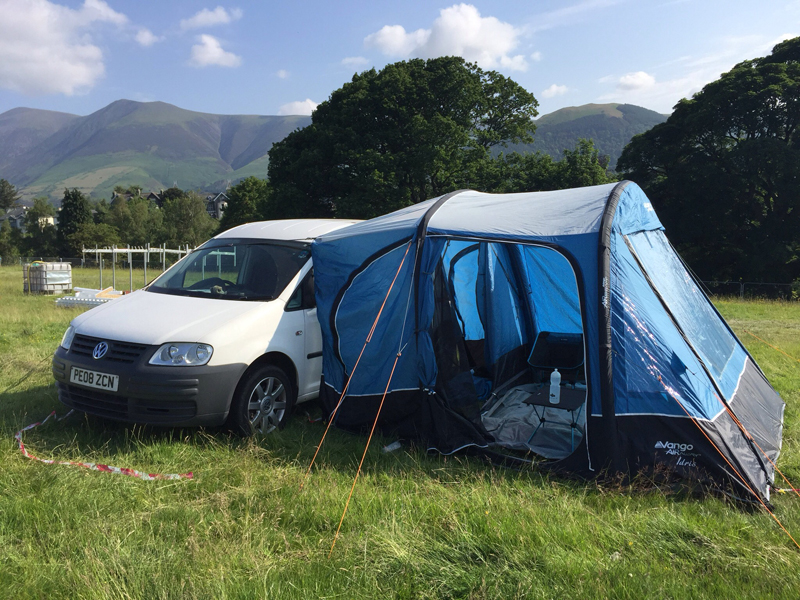 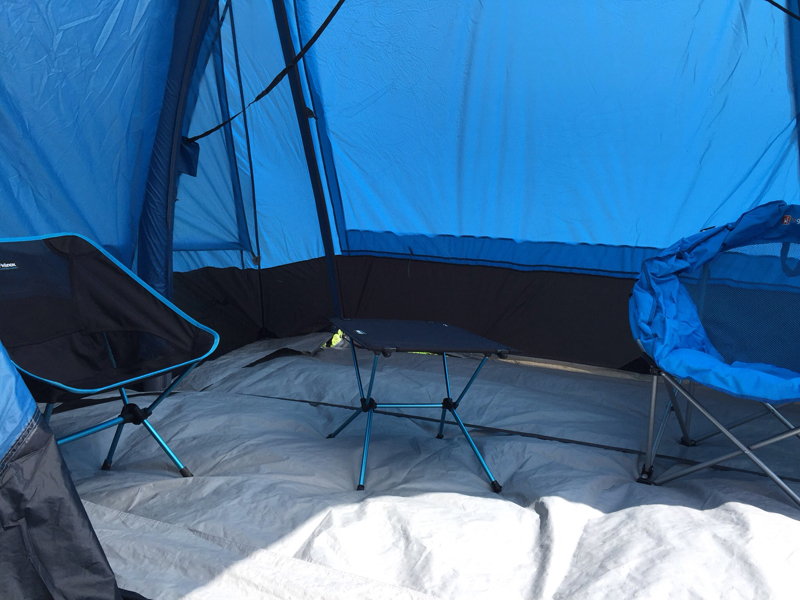 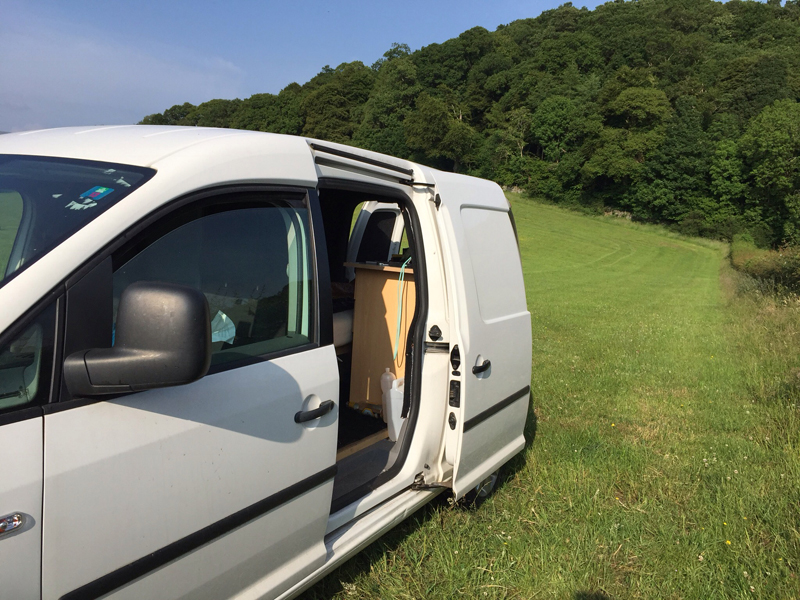 Oleg is far from completed. For now I've chosen not to go with a leisure battery and split relay charge because, well quite simply I don't need it. I have somewhere around 130,000 maH of power available at 5v through power banks and the only power I need is for phone and tablet. There's no electrically powered clean water tap - I'm still capable of lifting a 5lt container and pouring the water manually. In time and as the trips get longer I may look at the power situation again but for the present it's more than enough. Now it's been used in the real-world  I'll get around to sealing the sink in place and in time I'm sure the laboriously hand-swen covers will be replaced by something a bit more professional looking. But summer's here and after 3 months in the building the priority now is getting Oleg out on the road and waking up, in comfort, where the road takes us.

More in this category: « The road to 4 wheeled microadventure - vanlife in miniature Part 1 72 hours in the Jungfrau region »
back to top