The John Muir Trust, which looks after the upper reaches of Ben Nevis, has become concerned at an increasing number of visitors using Google Maps to direct them to a route up Ben Nevis.

Depending on how someone searches for the route, Google Maps may direct them to the car park nearest the summit as the crow flies, indicating a route described by experts as “highly dangerous, even for experienced climbers”.

The John Muir Trust’s Nevis Conservation Officer Nathan Berrie said: “The problem is that Google Maps directs some visitors to the Upper Falls carpark, presumably because it is the closest carpark to the summit. But this is NOT the correct route and we often come across groups of inexperienced walkers heading towards Steall Falls or up the south slopes of Ben Nevis believing it is the route to the summit.”

Heather Morning, Mountaineering Scotland’s Mountain Safety Adviser, said: “For those new to hill walking, it would seem perfectly logical to check out Google Maps for information on how to get to your chosen mountain. But when you input Ben Nevis and click on the ‘car’ icon, up pops a map of your route, taking you to the car park at the head of Glen Nevis, followed by a dotted line appearing to show a route to the summit.”

Heather added: “Even the most experienced mountaineer would have difficulty following this route.  The line goes through very steep, rocky, and pathless terrain where even in good visibility it would be challenging to find a safe line.  Add in low cloud and rain and the suggested Google line is potentially fatal.”

And it’s not just on the UK’s highest mountain that Google can lead people astray. Many other popular Munros have fallen foul of the same (likely computer-generated) line luring the unwary into life-threatening terrain. For An Teallach in the north-west, a ‘walking’ route was input into the search engine and the line offered would take people over a cliff. 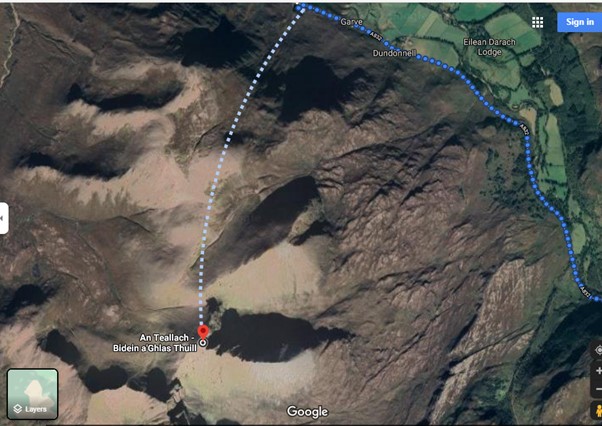 A similarly dangerous route seems indicated for An Teallach. Other mountains show similar dotted lines which look like, but are not, proper routes.

Heather continued: “It’s all too easy these days to assume that information on the internet is all good stuff, correct, up to date and safe.  Sadly, experience shows this is not the case and there have been a number of incidents recently where following routes downloaded off the internet have resulted in injury or worse.

“Modern navigation technology brings some amazing advantages for hill walkers, but this example is clearly not one of them. Walkers and climbers with even a little experience will know to read information from a map, whether digital or paper, and if they are looking for downloadable routes know to use reputable sources and check several sources to ensure the information they are accessing is the right route for their level of experience and ability.

“But especially on Ben Nevis, many people are not aware of where to get reliable information and may quite naturally assume that Google Maps, which got them from their home to the foot of the mountain, can carry on and do the job right to the top. This is not the case.”

Mountaineering Scotland and John Muir Trust are appealing to Google to consult with them so this life-threating information is removed from their system. The John Muir Trust adds that appeals so far have been met with silence.

In the meantime, they would like to advise anyone thinking of walking Ben Nevis, or any other mountain or hill, to cross check information on a map, or consult a local guide.

More in this category: « Ultra runners prepare for return of racing in the far north west of Scotland
back to top