The revised Fenrir down jacket from giant conquering Jöttnar has had some refinement so it to allow you to stay warm in the mountains whilst you smash your objective. 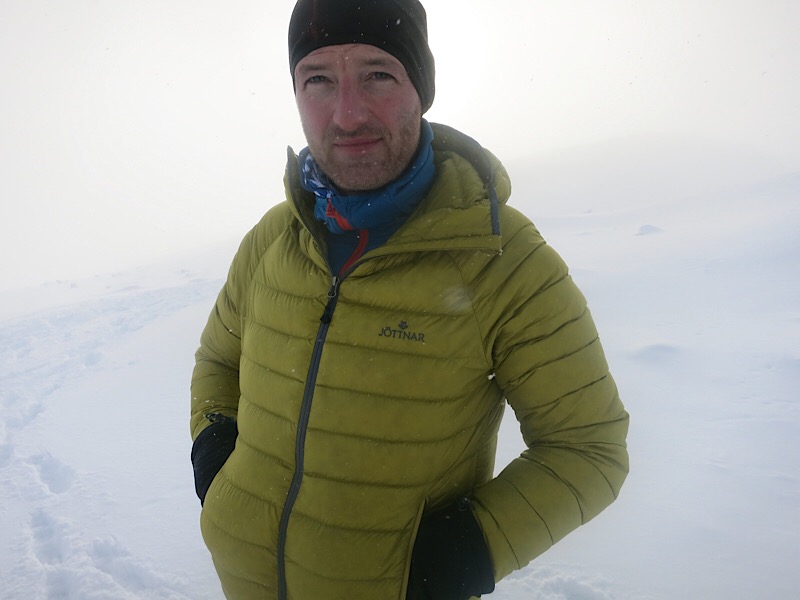 We have had a review of a previous version of the Fenrir from Tosh, the version I have had over the winter has a couple of updates. The current spec is: 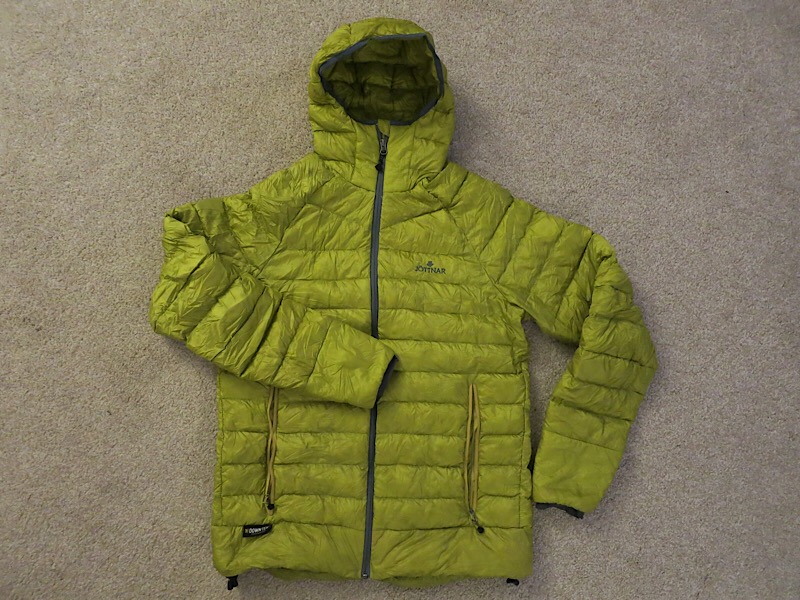 I’ve had a play with the Fenrir whilst scratching around in Scottish Winter conditions, a mixture of mind crunching cold, damp freezing sleet and a sprinkle of rain. Which is good because the down is treated by Down-tek. 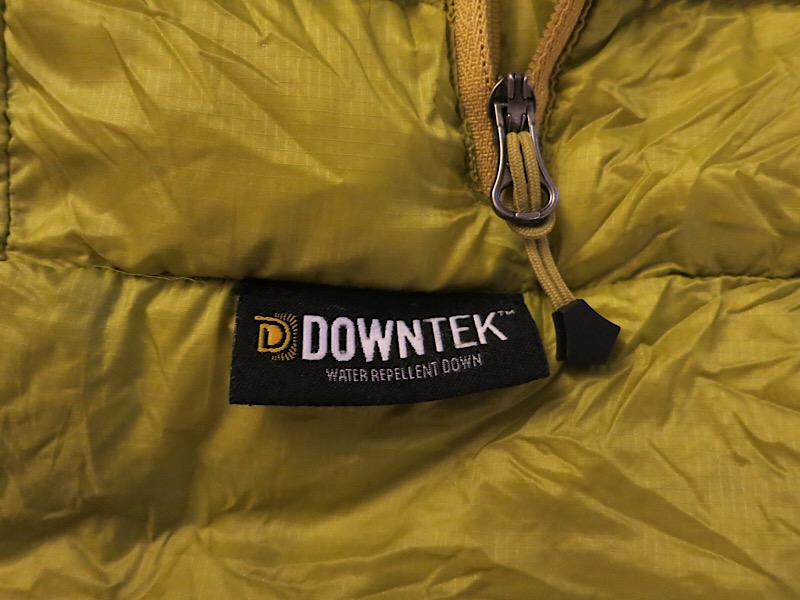 I saw a blog recently that didn’t recognise the use of water repellant down for use in the Scottish Winter climate, I asked why and the reply was they were still to be convinced by hydrophobic down. Well I am believer and hopefully these images can prove it out with the claim of the suppliers and manufacturers. There was a little mishap, unrelated to any normal activity, basically my dog decided to have a chew and tore the inside of the jacket. The silver lining is it exposed the fill. I took some out and saturated it in a glass, granted not the most scientific test but for me conclusive. It didn’t clump up in a ball. Once I removed it from the water I dabbed it on some paper towel and it went back in the hole it came from. 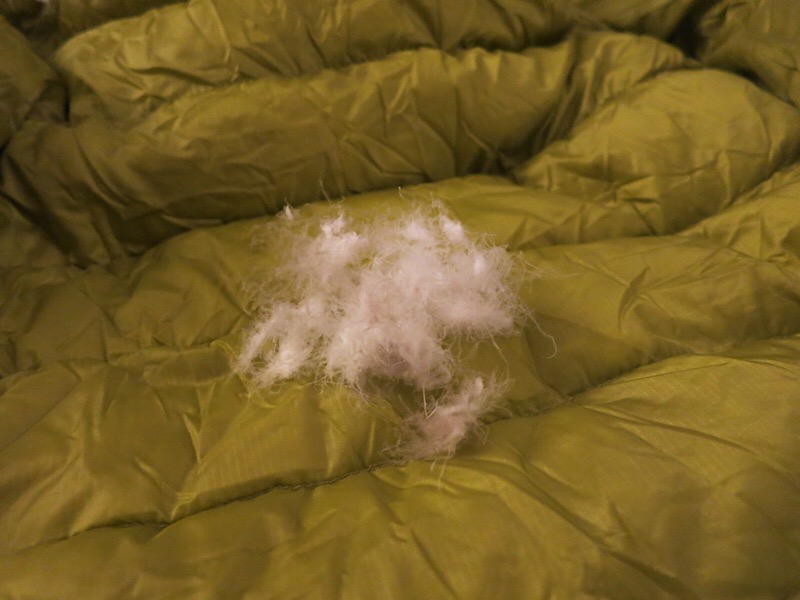 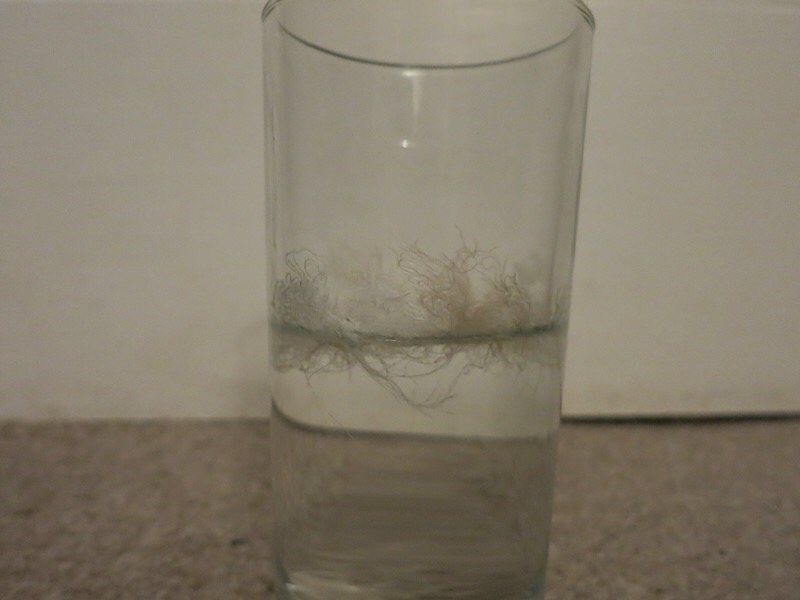 In practical use I have allowed the Fenrir to become wet on a walk off back to the car park in the Cairngorms. It was a light but constant downpour, the outer shell fended off the precipitation for a fair bit, however, once the moisture passed through there was no sign of the down collapsing meaning the loft will provide insulation. Again not the most scientific conclusion but it makes sense in my book. 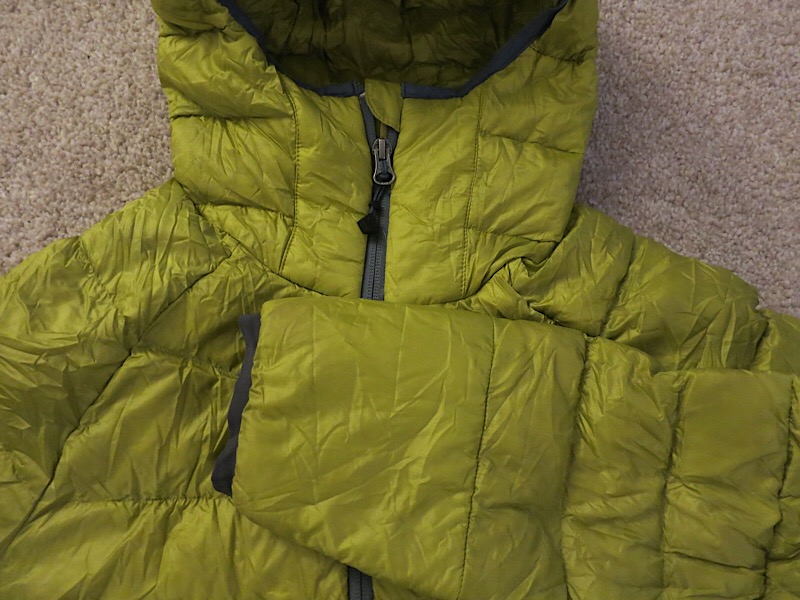 Jottnar have thought about the limits to the hydrophobic down though, the potential high saturation areas, the cuffs and the neck, have synthetic insulation.

In terms of fit, the Fenrir is classed as a standard fit, it is well cut but nothing sculpted so I’d agree. In the wilds of Scottish Winter I mainly wore it underneath a hardshell whilst climbing. 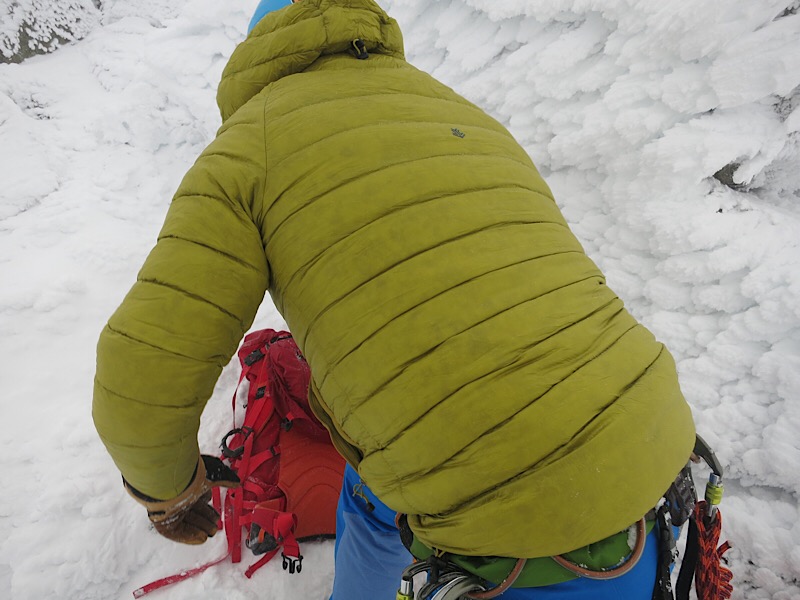 I did put it over the shell on a couple occasions when it was less cold on the climb and was nippier at the summit. The Fenrir did the job in terms of taking the edge of the drop in temperature but movement wasn’t ideal.

Under the shell, this is where the Fenrir excelled! Movement, warmth, weight and the ability to fend off the moisture build up from the stop-start nature of winter climbing. I had no issues with below freezing temps even with a layer of sweat captured in the shell. 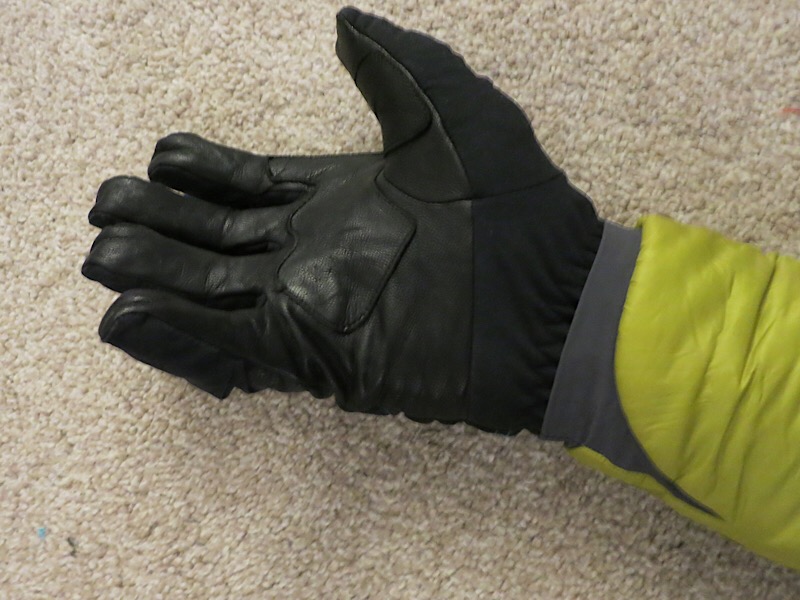 One update is the cuff, the insert allows the cuff to open up and allow a bulky glove through. In practice, the glove is fine going in. Getting the glove out on the other hand (pun intended) that means taking the glove off. 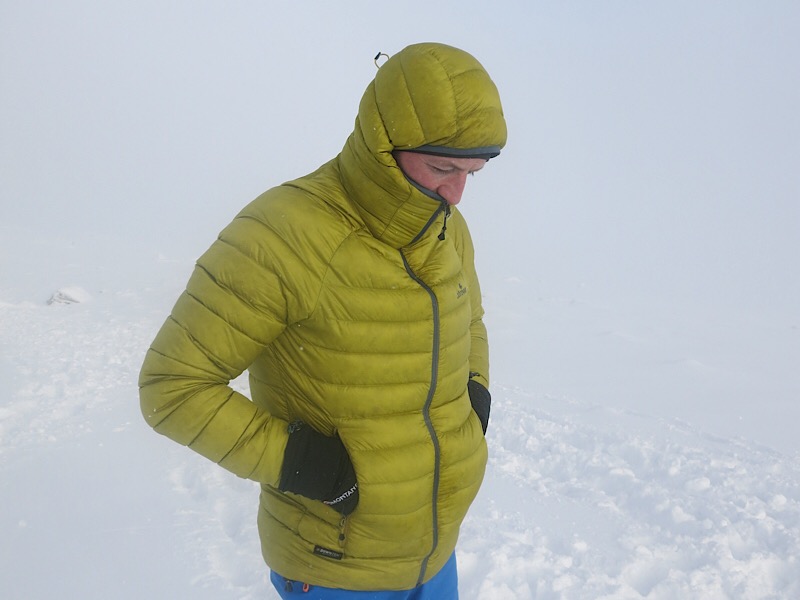 The hood has a single cinch and is fitted so it’s for under helmet use. I didn’t use it whilst wearing a helmet but it was useful to give extra protection when dismantling a couple of final belays. Jottnar introduced a version, the Thorsen, without a hood for those who might prefer not to have the veil. 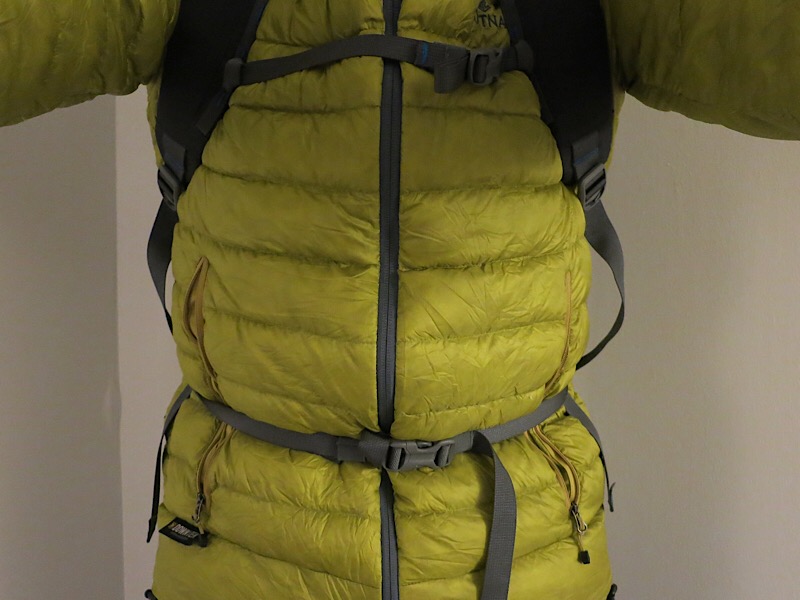 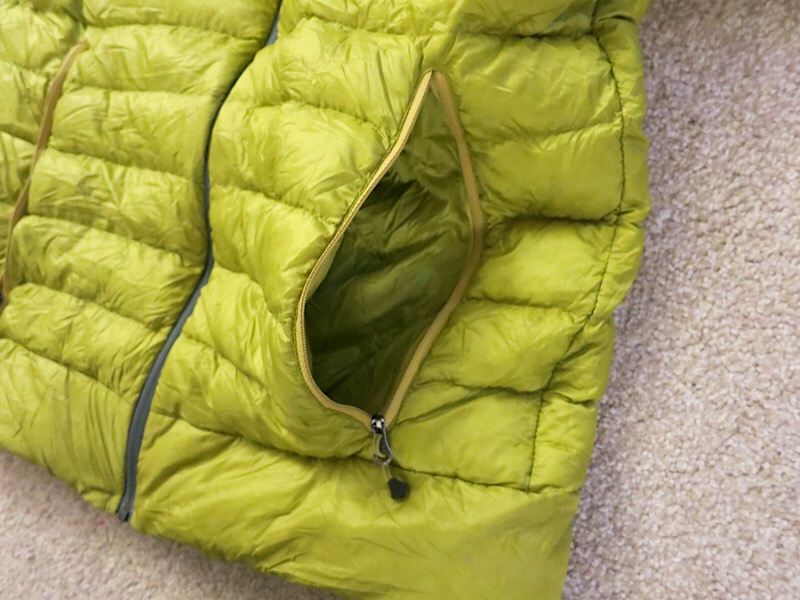 The front hand warmer pockets could do with being raised slightly for two reasons. Initially because they sit at waist belt / hip belt level. Secondly, if they have the same depth but with the zip opener raised it will give the pockets a bit of depth. There’s also a handy inside pocket that kept my phone warm in sub zero. 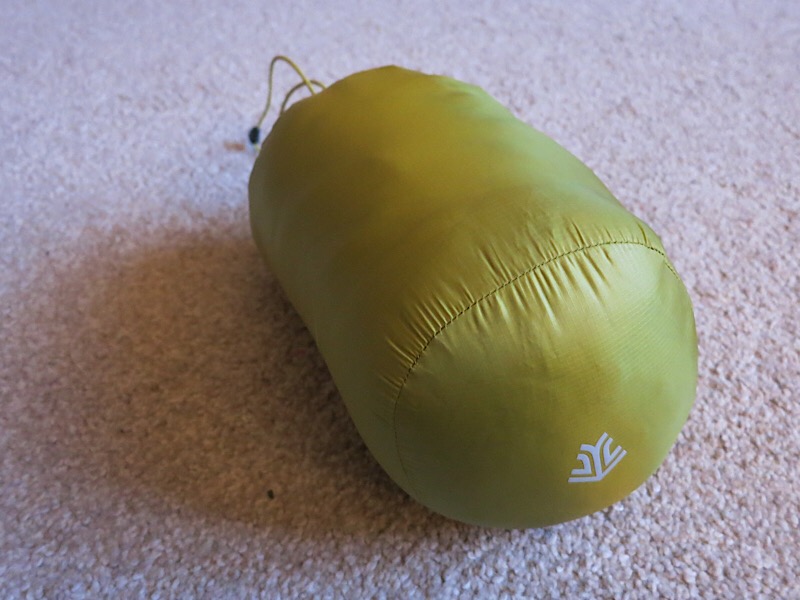 The jacket compresses in to the provided stuffsack, I kept this one in a waterproof normally when I was out.

The Fenrir enjoys the cold, the movement, the stopping then the movement again. Jottnar have refined the jacket to allow us to stay warm and light in the mountains. I look forward to taking it to an Alpine environment, it will be good to use it on it’s own without a shell. It’s a great insulation layer and definitely one to have to hand for the pack in all environments.