There are some places that are well known for road cycling in the Alps, largely because they are relevant to the Grand Tours of France or Italy. Alpes Duez, Galibier, Stelvio, Gavia to name four. Switzerland doesn’t have a ’grand tour’ so it’s mountain passes aren’t maybe as well known, but it does have a national tour in the Tour de Suisse, that started in 1933 so has some fine heritage.

Held over nine days in June it is often used as final preparation before La Grande Boucle, that fact in itself proves the quality of the terrain. The country’s other race of note being the Tour de Romandie, which takes in the western and French speaking part of Switzerland along Lake Geneva, connecting Geneva, Vaud and the Lower Valais. 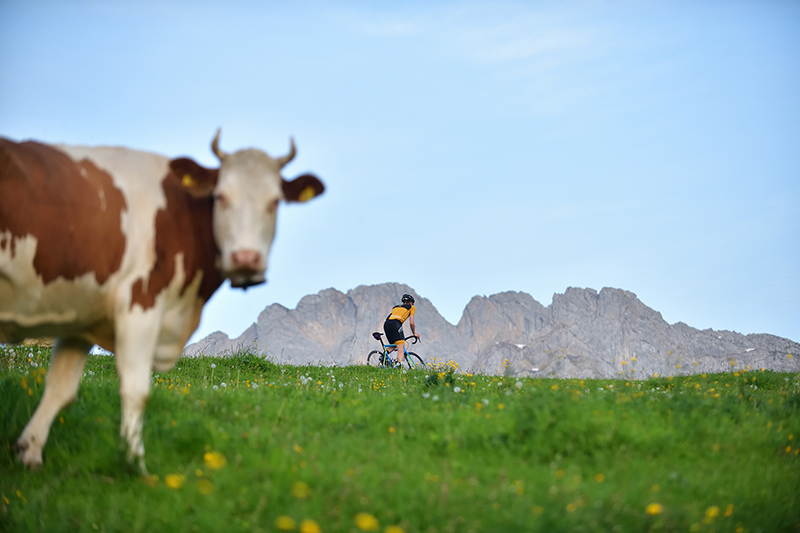 As I was packing to fly out to Geneva, to sample the delights of Vaudoises cycling, Hugh Carthy who rides for EF Education in the World Tour peloton was winning the final and ‘Queen’ stage of the 2019 Tour de Suisse. It included three ‘hors’ category climbs packed in 101km, Carthy also took home the polka dot jersey for King of the Mountains. The overall was won by a young Columbian. Bernal, who also took yellow in Paris.

Carthy hails from Preston, just down the road from me. I raced against his Father in the 1990’s and remember young Hugh riding around with his Dad on local lanes and training with my former club on Sunday runs over Roeburndale, Cross of Greet and other North Lancashire hills. Plainly he’d made short thrift of the Swiss hills, something I was unlikely to do. But no matter there was plenty to look forward to, and Lancashire had already made it’s mark on Suisse cycling.

Europe was in the midst of a heat wave when I landed in Geneva, but thankfully Swiss trains come with excellent air conditioning, a point that became apparent when I stepped off the train at Aigle to change for the branch line to Les Diablerets. Opening the train door was more like opening an oven door. Thankfully things were slightly cooler arriving in the village at 1200m, nestled as it is on the north side of the Sommet des Diablerets 3210m. My only previous knowledge of Diablerets was as a good ski location, with reliable winter sports from October through to May due to the Glacier 3000 area, alongside some great back country touring.

After a refreshing beer and fine food at the one hundred year old Hotel du Pillon, plans were hatched for the following day with local cycle guide Alain Rumpf, who in a previous life had worked at the UCI and amongst other things organised the Tour of Beijing.

With fine and hot weather settled over Europe it was no surprise to see a deep blue sky greet us in the morning, and fuelled on Bircher muesli, fresh local yoghurt and coffee we were set to roll out and sample 85kms of Swiss roads on route for Villars. With Swiss efficiency we were straight out and up the Col du Pillon to 1546 m, that said it’s not brutal and more a steady upwards plod on an excellent road surface. At the top is the Glacier 3000 cable car, and also the border between the cantons of Vaud and Berne. From here it’s a fast 7km descent at around 5%, then along the valley bottom before arriving in the chic ski resort of Gstaad, complete with designer outlets and preparations for the Swiss Open Tennis. Any one for tennis? Not our group, as we pressed on through Chateaux-d’Oex eating up the miles under a hot sun and starting the 14km climb of the Col du Mosses. All though a major road that is kept open all winter, it wasn’t particularly busy with traffic as it weaved it’s way up through the trees, which thankfully gave some shade. 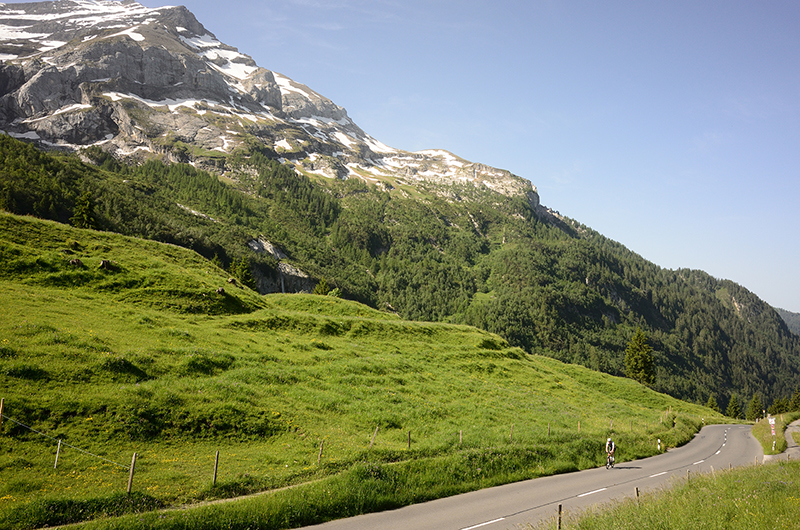 The climb, graded as a category 3, has featured once during the Tour de Suisse but five times in the Tour de France, most recently in 2016 when the 184km stage went from Berne to Finhaut d’Émosson. (Rumour has it the World Road Race Championships may finish there in 2020). That’s not it’s only claim to fame however, part way up is the village of L’Etivaz - famous for its cheese. And lets face it the Swiss love cheese. This particular speciality is only made between 10th May and 10th November. Individual local farmers make cheese in copper cauldrons, that is shaped in to wheels around 60cm in diameter, and taken to a central store where it is soaked in brine then matured for between nine months and three years. Having stopped for a drink and bite to eat at the cheese store shop we were privy to a glimpse in the cellar area that holds up to 30,000 cheeses, that weigh in at around 25kg each ! 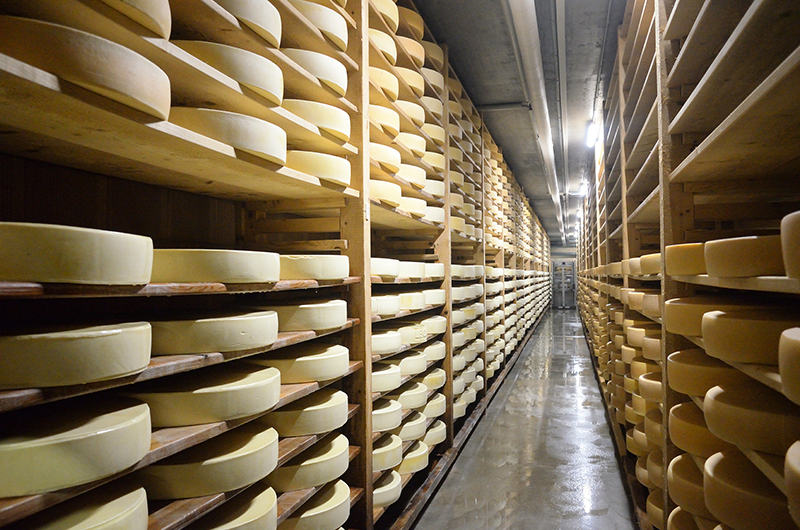 Meanwhile instead of rolling cheese downhill there was the small matter of getting 80kg of Lancashire up hill. So steady away until the summit area was reached. Being a year round open road, and the summit being as a much a small plateau more than a col, it is in fact reasonably built up, with accommodation and a few hostelries that serve the xc-ski trails that are to be found when it is significantly colder. It was remarkably over thirty degrees celsius thirties even at 1445m.

Then downhill before a sharp left and winding side road that Alain pulled out of his bag of local knowledge. After a short winding climb a fantastic view open out that reflected Switzerland at its summer best. Rolling meadows of wild flowers, big valleys, and snow clad Alpine Peaks. After narrow winding decent on what Alain described as a rough surface but what I’d describe as an average British road surface, we came out on the road to Les Diablerets. 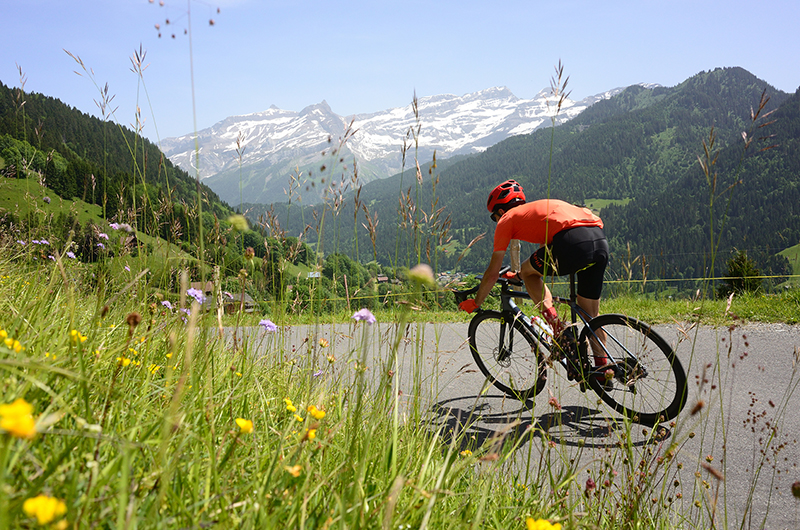 Alan Rumpf descending the side road off Col du Mosses

That wasn’t finish of the day though as we passed through the our start point before heading up the Col de la Croix towards Villars. From a cycling perspective this pass is probably the jewel in the crown of Swiss road riding, although not the highest at 1778m it has everything you’d want. Alpine switchbacks, good road surface, dramatic views, and plenty of it to go at but not excessive at 8.4km, with an average gradient of 7.3% and maximum of 12%. Enough to ride hard and imagine your ‘up the road’ about to win a stage and a polka dot jersey. The descent doesn’t disappoint either, being a similar length on an excellent road surface, the only concern being that had the heat softened the tarmac making it slippy ?! Thankfully all was good and, after high speed plummet in to Villars the next thing to go down, as reward for a fine day in the saddle, was beer on the veranda of the Hotel Alpe Fleurie. 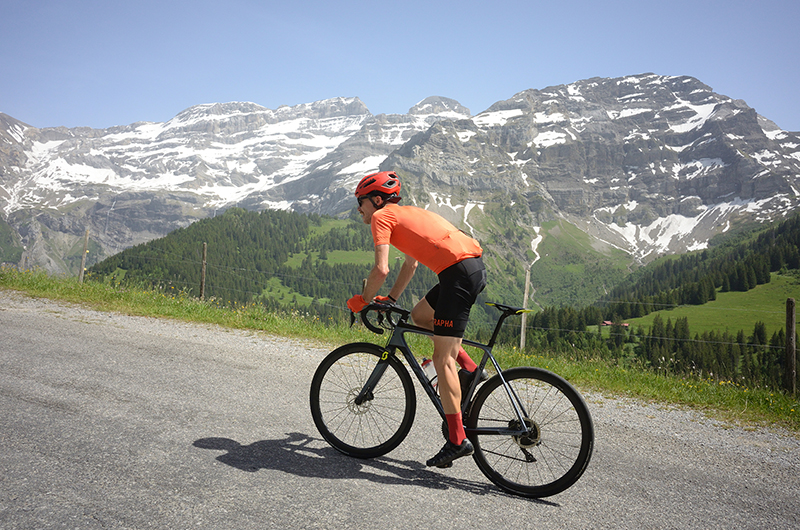 At 1300m, Villars is also the home to some fine winter sports - snowboarding, alpine and cross country skiing, plus backcountry. But it doesn’t fall asleep in the summer with 300km of hiking trails, 120km of MTB trails and some fantastic road riding as I’d just sampled.

Day two of the trip again dawned sunny and hot, and while the temperature went up we headed down. Down to the Rhone Valley, around 10km of fast flowing main road, to the valley bottom then along a cycle track and quiet road to Villeneuve on Lake Geneva where a group of Swiss Military were passing out from their annual stint of National Service. With a tour of the World Cycling Centre at Aigle planned we soon had our marching, or peddling, orders and were heading back down the valley via a cycle track next to the Rhone to Aigle and the velodrome. The headquarters of world cycling. Opened in 2002 it contains a 200m indoor track, BMX track, gym, UCI headquarters offices, workshops and also gymnastics and trampoline facilities. And essential to all cyclists a rather good cafe. And interestingly many of the facilities are open to the local community, as well as those athletes who train at the facility because their own national federation isn’t in a position to support them. 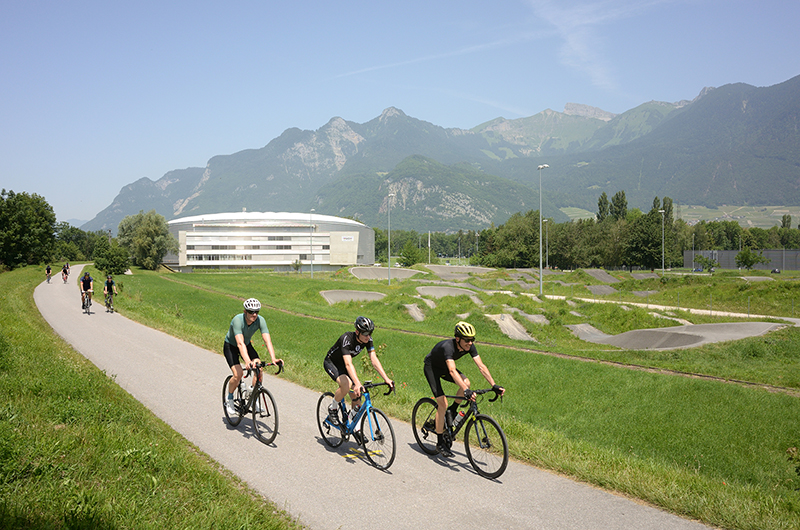 Rhone Valley at Aigle with UCI Headquarters behind

Leaving Aigle we rolled down the Rhone on the cycle track towards Bex where it’d be time to head on up to Villars. The ‘normal’ route would take you up the main but not busy road towards Gryon, but out man Alain had another secret back road that turned right from Beveux up the Route des Plans. And what a climb, not all steep but with sections of 12% and the searing heat it felt like major col, especially with sweat stinging your eyes. Up, up and away passing Frenieres and in to Les Plans. 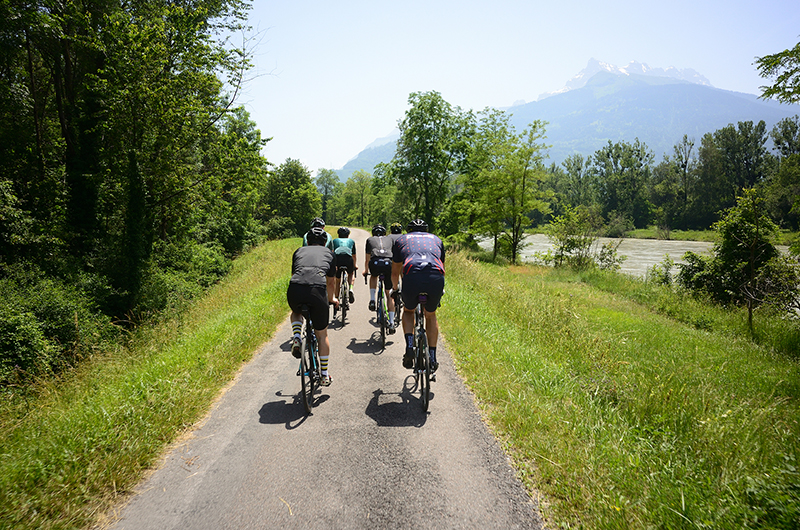 Thankfully there was water fountain in the village to both refill a bidon and also dunk your head under. If the scene had been witnessed in black and white it could have been from a 1920’s grand tour photograph. After another slight climb the road then traversed the hill side above above the L’Avancon d Anzelinde River giving wonderful views across the valley and making the climb all the more worthwhile. Before long we were back in Villars, after 70km and 1200 meters of climbing (If you’d wanted more there is the brutal climb with incredible views up and back to Les Chaux) it was time for refreshment to replace fluids lost in the heat, and some fine local food to replenish calories burned. 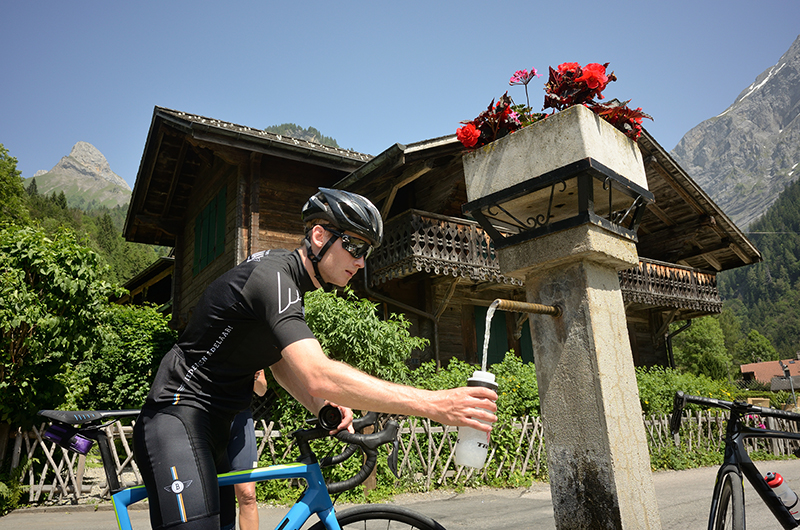 The previous two days had shown the variety and epic scale of scenery to be had cycling in the Vaudoises, and while other places may have longer or more famous climbs they also attract huge numbers of cyclists. What was so wonderful about riding the Moses, Pillon, Croix and the road to Les Plan from Bex is that you had the sense that the area had yet to be discovered and be over saturated by cycle tourism. On the final day of the trip we rode back over the Col de la Croix to Les Diablerets, simply up and over for 15km. 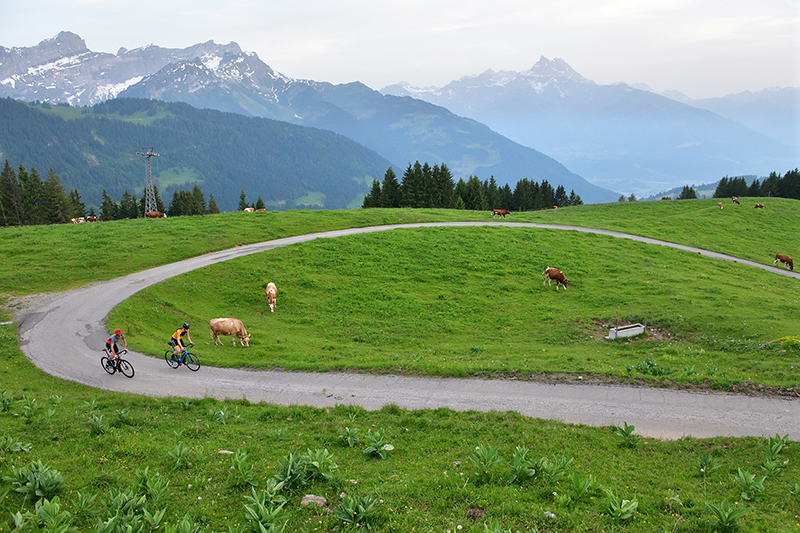 - Climb of Les Chaux above Villars

As we reached the summit the man who ran the small refreshment cabin was opening up, we helped him position the furniture and sunshades and sat and enjoyed a coffee. A small group of cyclists then joined us, they were from Liverpool but one was half Swiss and knew the region so was introducing his mates. They were the only significant group we’d seen in three days. Conversely I’ve been to other famous climbs in Europe and the summits resemble a British seaside town on a Bank Holiday - crowds, hustle and gift shops. If you’ve done the ‘tick’ thing and been to the famous spots or you simply want to ride some fantastic roads I’d va va voom to the Vaudoise.  You can find out more about road cycling in Switzerland at www.alpes.ch/en/cycling.