What's the future for ski resorts in a changing climate?

In 1952 ‘Climate and the British  Scene’ by Gordon Manley was published, and has been reprinted as updated editions numerous times since.

We've commented before on how Klattermusen like to do things a little differently, and the Draupner jacket is no exception.

Published in Clothing Reviews
Tagged under
Be the first to comment!
Read more...
Monday, 18 January 2021 12:19

The Fjorgyn Anorak is designed to provide portable shelter in a lightweight, packable, and waterproof format. Fjoryn can be brought along everywhere to provide protection from wind and rain when needed. This is a super lightweight version of a classic Klättermusen Anorak. The zipped pocket can be used as a self-stowing pocket for easy transport and handling. The hood is fitted with a lightweight neoprene brim, and the neck adjustment can be used for ventilation. The 48 g/m² 2.5-layer semi-transparent fabric has a carbon print on the inside and feels silky smooth to the skin even with only a t-shirt underneath. The fact that the fabric is uncolored (Frost color) and bluesign® approved and fluorocarbon-free makes this anorak a great choice for the conscious. 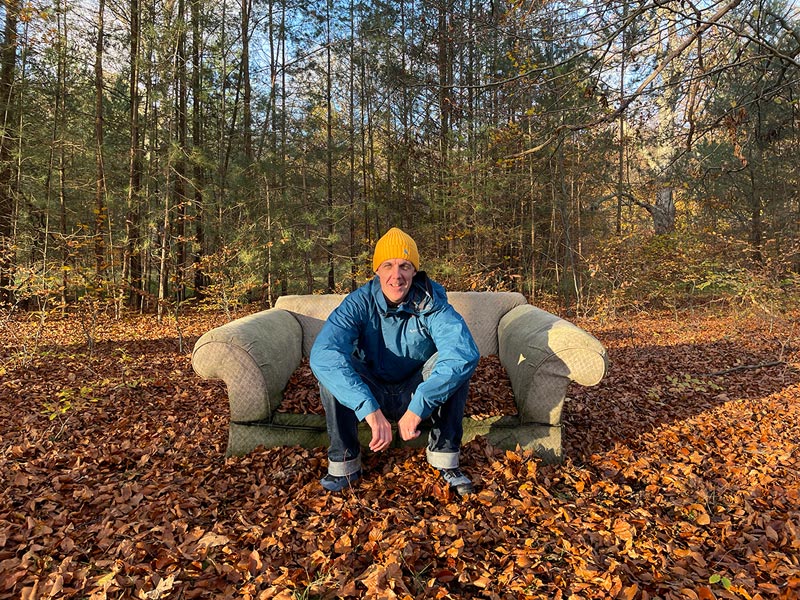 “Hang on I’m going to put my cag on” A familiar refrain these days, it's either the rain, the wind, or it’s just  getting too chilly. So you stop whatever you’re doing and whip a ‘cag’ out of you rucksack.

It wasn’t forever thus however. The ‘cagoule’ as we outdoor folk may know it is a relatively new thing - but the parka or anorak is nothing new. Anorak comes from the Greenlandic annoraaq -  an over the head jacket developed by the Inuit and originally made from caribou or seal skin for hunting and kayaking in the Arctic. 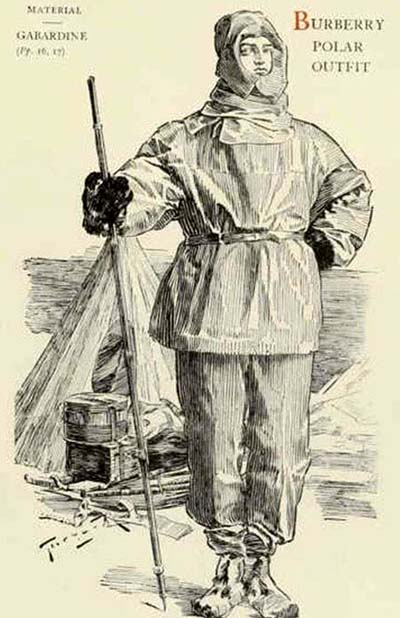 Obviously animal fur is warm, but hardly light or packable, Fridjof Nansen used a similar design with a hood in the late 1800’s for his polar expeditions using a Lancashire made fabric - gabardine - marketed under the name Thomas Burberry. Something the great Ernest Shackleton evolved in to his two piece ‘sledging suit’ which had matching trousers, that he used on his ‘Imperial Trans-Antatctic Expedition’ 1914 - 1917, Sandy Irvine wore the same in Spitzbergen in 1923. (The expedition where he proved is ‘metal’ and earned a trip to Everest in 1924).

One of the great ‘gear’ pioneers was Pierre Allain, in 1931 he developed ‘La Grande Cagoule’ - literally ‘a large cowl’ of rubberised silk to pull over a down jacket and use in conjunction with a half sleeping bag (Pied d'elephant)  to cover the legs. The idea being the long cagoule could be pulled over the knees and feet when in a crouched position on an unplanned bivouac. Bingo. Not a million miles away from a cycling cape the ‘Cag’ was born.

By the 1960’s the bright orange nylon cagoule was de rigour - pioneered by Noel Bibby who owned the brand Peter Storm. Until the early 60’s Peter Storm anoraks used tightly woven cotton - poplin, whereby the fibres swelled when wet creating a tighter weave that blocked out water. But in 1962 Bibby developed a Bri-nylon sailing smock which marked the beginning of their PU coated 101 nylon range and the forerunner of their 101 Cagoule. But nylon equaled sweat build up and Peter Storm’s ‘No Sweat’ was not the answer. Then came higher performance breathable fabrics. For a more detailed history check out Outdoor Gear Coach, our main source for this part of the review.

So where are we now ?

Well over the last few months I’ve been using the Fjorgyn from Klättermusen, a fascinating brand who I’ve discussed previously. For those not aware, they’re an established Swedish brand that focuses on innovative and understated mountaineering equipment with the highest standards and minimum impact on nature. And understated doesn’t mean boring. Far from it, some of the design features and detailing of their equipment is brilliantly functional yet subtle, and it seems to me to be the core of the brands DNA.

So what of the Fjorgyn? Well the swing tag says “Building on the heritage of Sami Anoraks, Fjorgyn is crafted to handle both rain and snow as well as the high wind speeds often prevalent in the mountain ranges of Scandinavia. Lightweight, and made to fit In a pocket, the Fjorgyn is a perfect backup for any season.” 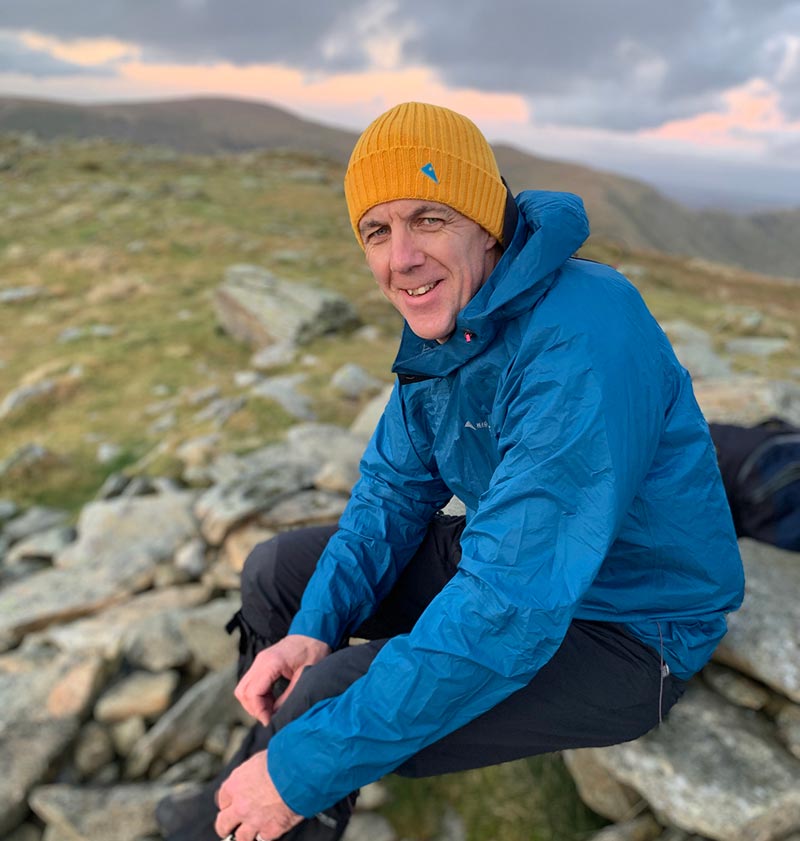 The first thing you notice is how light it is for a garment designed for mountaineering outdoor use, as opposed to ultralight running specific. (size medium weighs in at 202 grams - compared to say a Haglofs L.I.M Mountain Proof Anorak 258grams). The Fjorgyn’s fabric feels like silk, and like that animal made thread is stronger than first impressions may imply, while maintaining an element of stretch. Klättermusen use their proprietary Cutan fabric in its 48 g/m²  2.5L form for this anorak, which is available in 3 colours, Blue Sapphire, Redwood or Rock Grey, all of which fave a subtle ‘carbon effect’ print on. Cutan's  waterproof and ventilating technology was developed to improve existing fabrics as well as sustainability by developing PTFE free membranes to become fluorocarbon free in production. While flourocarbons have excellent technical properties they’re not good for the environment. Not surprisingly Cutan is bluesign approved.

I generally take a large and that was the size on test, there’s room for a thick layer underneath and even a thick down duvet at a pinch. When dressed lighter in the summer there was plenty of room, and the light fabric meant it draped well. If you like more of an athletic fit and are likely to be fell running or mountain biking then maybe go down a size.

A lot of over the head anoraks feature a short zip, not so the Fjorgyn. The only zip is to be found on the pocket near the hem on the right hand side that also doubles as an adequately sized stuff sack. It’s not a wrestling match to force it into the pocket, there’s plenty of room resulting in the packed size being about the size of two mugs of tea. I have to say I didn’t miss a zip down to the chest - the neck opening is wide enough and has a cord lock on it, plus it reduces weight and stiffness, skin scratchy stuff. Coupled with a clever 3 way hood tightening system you can end up with a snug fit around your head when the weather turns grim, but still be able to see. The use of a lightweight neoprene brim on the hood keeps the rain off your eyes and when the whole thing is synched up creates a sort of Bonnet effect. That may sound odd - but it works !!! 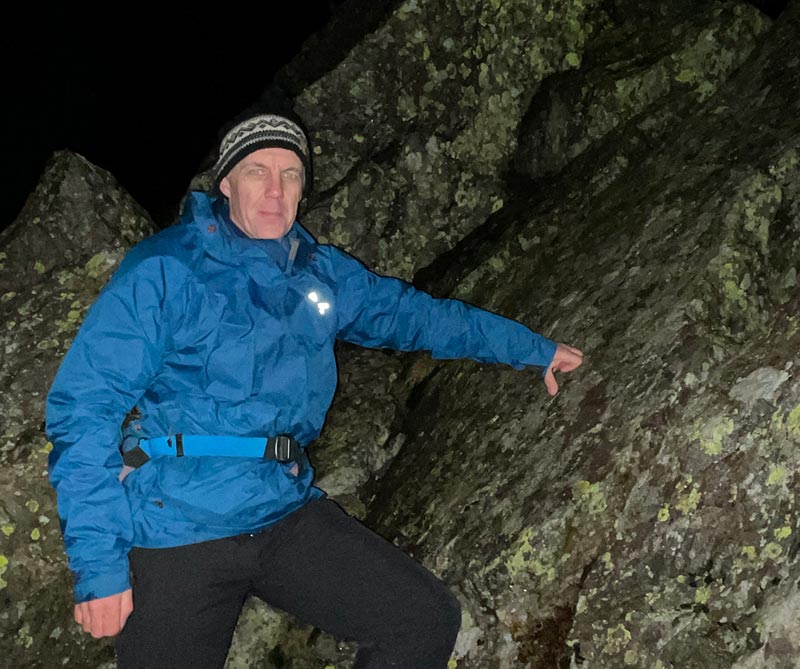 I’ve always found that with a lot of Scandinavian brands there is plenty of length both in the arms and body, enough to hide your hands out of the rain / wind (there are cords to adjust the cuffs), and keep your lower back and well protected from drafts. The hem tightening is just above the actual bottom of the garment, the idea being that tightening it creates an angle so any rain doesn’t run directly on to the legs. Not surprisingly all the seams are taped for full waterproofness (the fabric has a water column rating of 20000mm).

What sets Klättermusen apart from a lot of outdoor brands is the unique look of their clothing and equipment. There is something inherently stylish about the design, both in cut, features and detailing. The name Klättermusen means ‘climbing mouse’, the logo at first glance looks like a triangle or mountain, then you notice the dot and realise it’s a mouse’s head. That triangle appears within the Fjorgyn’s detailing, on the material that holds the adjustment shock cord in place, on the actual grips, and the ‘eye’ hole is where the cord runs through. It’s subtle but creates the whole. On more than one occasion I wore the anorak as a day to day outer garment in an urban setting and numerous people commented “oh that’s nice”. Meanwhile it features a reflective logo on the front and stripe on the rear. - be safe be seen. 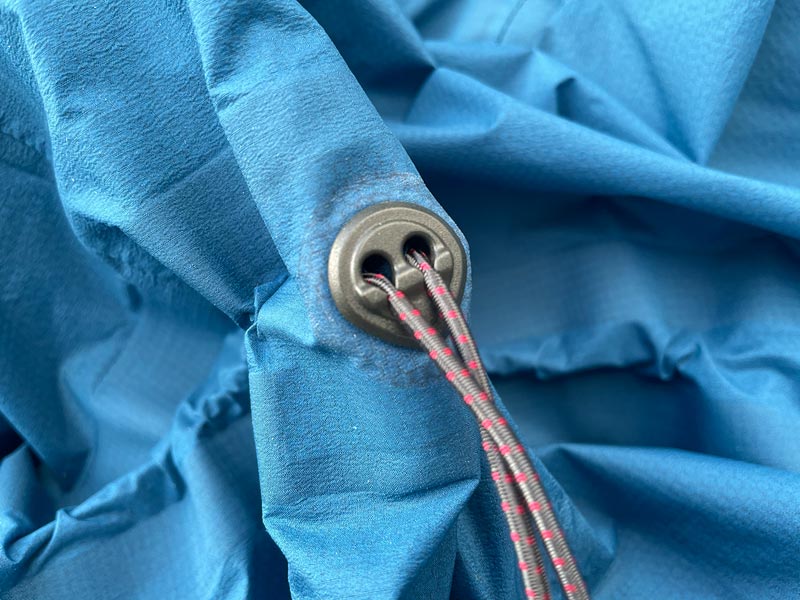 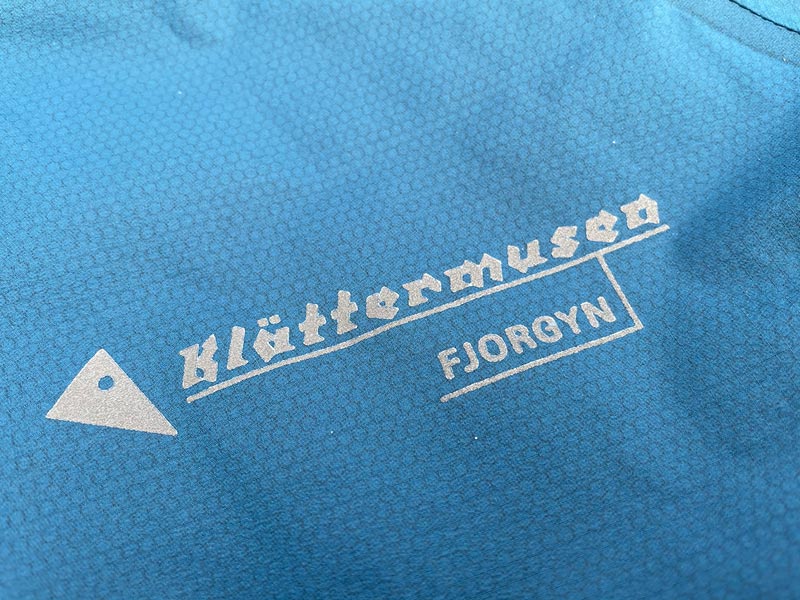 Of course the proof of the pudding is in the eating. Or the walking in an anorak in mixed weather is a test. The Fjorgyn works a treat on the hill, it takes up minimal space in a rucksack, fits well, keeps drafts out and the hood design works well in blustery weather and heavy showers. The first time I wore it in earnest was while taking youth group for a day out above Langdale, the sort of day that isn’t ideally suited to taking new kids out of the block. Windy, heavy showers, and occasional hail. As it was the youngsters had a ball, and the Fjorgyn kept everything thrown at it at bay.It totally blocks the wind. Unfortunately, or fortunately, I didn’t spend all day in the uplands in heavy rain to vouch for it’s waterproofness. I did however wear it locally for periods of up to an hour in the rain, and a gusty wet walk along Blackpool promenade is as good an approximation for time in the hills as any. I remained dry. 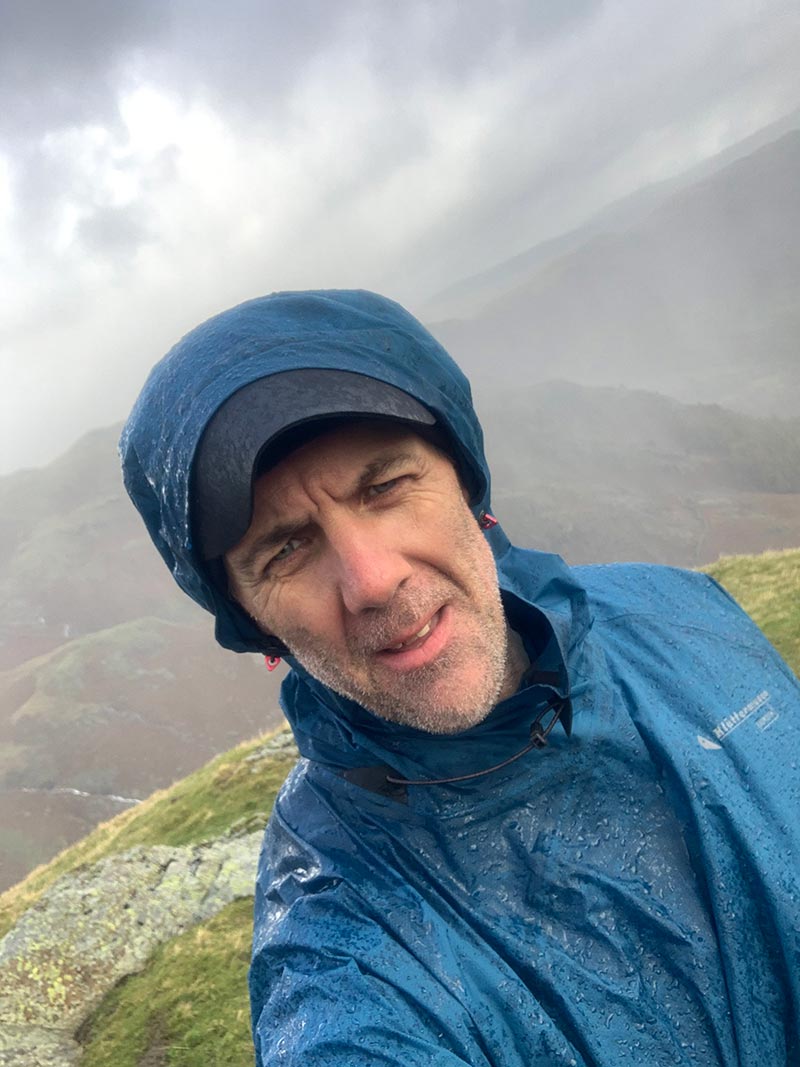 On the opposite end of the social spectrum I also wore it leaving an event at The Four Season Hotel on Park Lane, and didn’t feel or look at of place on a chilly night in December. (I was there legitimately during Corona Virus guidelines).

On the Klättermusen website the  RRP of the Fjorgyn is £248 - at time of writing they’re in the sale at £125 which is an absolute bargain. The former undoubtedly places this anorak as a premium product - and lets be honest it is. Great design, great ‘looks’, functional, and with excellent ‘sustainability’ credentials. And it it’s around a similar price point to other premium brands outerwear, and looks unique.

So is the Klättermusen Fjorgyn a garment fit for all four seasons. I’d certainly say so.

Thanks to Outdoor Gear Coach for their history of waterproofs in 2 parts; up to 1945 and post 1945

Published in Clothing Reviews
Tagged under
Be the first to comment!
Read more...
Monday, 05 October 2020 10:18

Published in Industry News
Tagged under
Be the first to comment!
Read more...
Thursday, 26 September 2019 10:00

There are some places that are well known for road cycling in the Alps, largely because they are relevant to the Grand Tours of France or Italy. Alpes Duez, Galibier, Stelvio, Gavia to name four. Switzerland doesn’t have a ’grand tour’ so it’s mountain passes aren’t maybe as well known, but it does have a national tour in the Tour de Suisse, that started in 1933 so has some fine heritage.

In 2018 I visited the Cairngorms to write and photograph a feature for the British Mountaineering Council’s ‘Summit’ magazine. The piece was about using eMTBs to access the steep skiing at the end of long corries in Scotland, the added power of the bikes negating the more inefficient standard issue mountain bike or a long walk.

Autumn, when the light begins to fade earlier and a chill starts to fill the air. Not only the lowering of the temperature but that chilling feeling that summer is gone and all you’re left with is the memories of dusty trails, evening rides and the need for sun cream.

It seems that no trip report or gear review is complete these days without some GoPro footage, so we asked one of the UK's top photographers, Henry Iddon, to put the latest, all-singing, all-dancing offering from Kodak to the test.

Published in Miscellaneous Reviews
Tagged under
Be the first to comment!
Read more...
Tuesday, 15 August 2017 08:19

The last time I visited Switzerland was Gstaad in early February, snow on the ground and low cloud raging in the valley.