You could have been easily forgiven for thinking winter this year was little more then a distant memory. With the UK’s unpredictable weather system, lack of major snowfall and freeze-thaw temperatures, there have not been many opportunities for anything other than frustration to develop whilst waiting for stable snow conditions.

So when an opportunity to attend MSR’s latest Revo Ascent snowshoe from their Women’s specific range, on a snowshoe course self funded in the Alps, the opportunity to test a new product seemed too good to miss.

The main question present in my mind was one of practicality. Was it worth owning your own pair of snowshoes a worthy investment to make the most of moving through snowy, non-technical slopes or a cumbersome and heavy addition to a mountaineer’s kit? 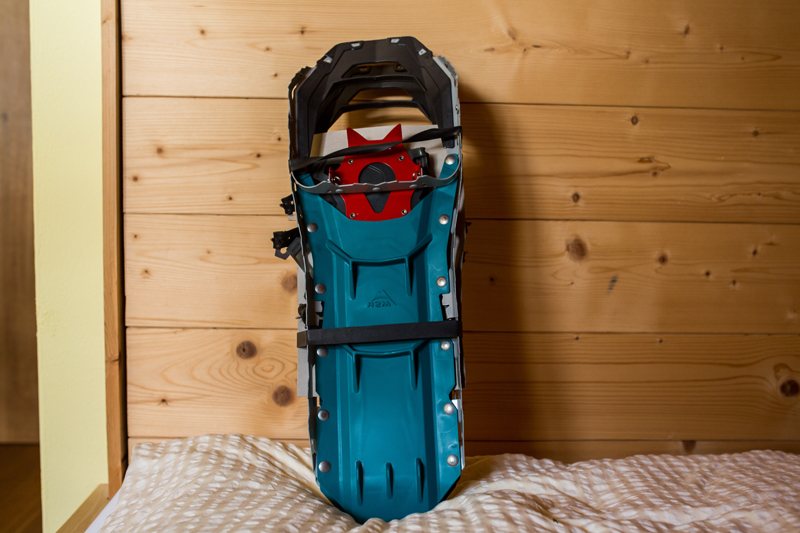 What the manufacturers say:

Our Women’s Revo Ascent snowshoes deliver the same powerful grip, security and supreme durability of our men’s model—yet do so in a lower- profile design that gives those with a narrow stride better agility through the snow. The external traction teeth of the ExoTract ™  deck ensure control, especially in rugged terrain. Its plastic foundation delivers unrelenting durability along with torsional for excellent purchase. With the Women’s ultra- secure PosiLock ™  AT bindings and Ergo ™  Televator heel-lifts, the Women’s Revo Ascent snowshoes deliver tenacious performance for any adventure.

The latest offering from MSR, the Revo Ascent, offers users an option to buy a snowshoe that is durable, more secure for smaller feet and all terrain performance. As a ‘Women’s fit’ Snowshoe, the Revo Ascent, is definitely worth choosing over the standard snowshoe, as it offers women the option to use a lighter and ergonomic shaped snowshoe for a smaller boot underneath the MSR bindings to ensure greater fit and confidence to be able to move on steep ground, along with a built in high-strength DTX 4 point crampon. 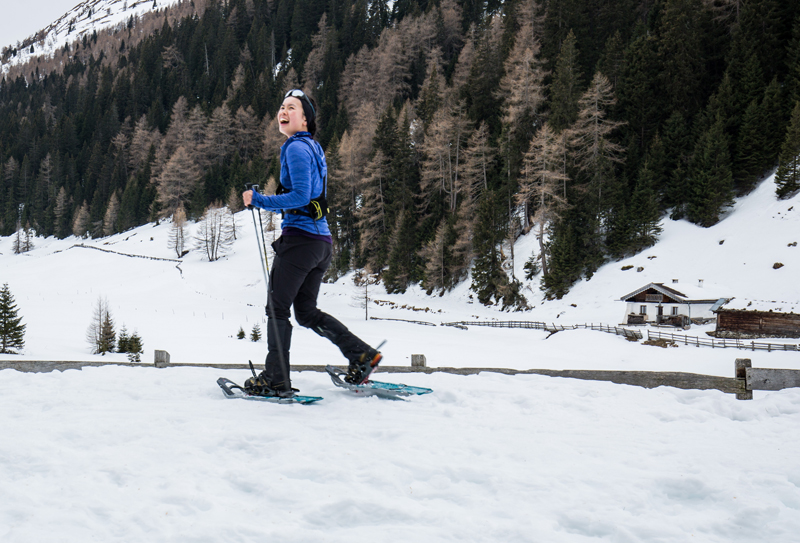 As a winter mountaineer, I’ve experienced many exhausting days in the past (minus snowshoe) wading through thick powdery snow in Scotland wearing normal B-rated winter boots, or crampons for short technical sections.

After a brief introduction on the course on how to wear snowshoes (walking along snow with a slightly wider stance then normal to avoid tripping over your own feet,) the snowshoes were a straightforward piece of kit that allowed hiking over deep soft snow to be much easier, as the snowshoes spread the weight over a larger area to avoid sinking in. 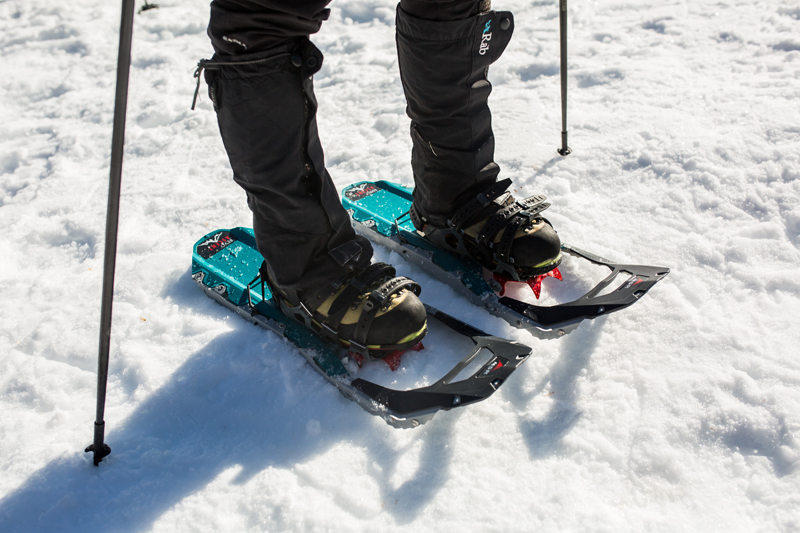 The snowshoes are attached on using MSR’s PosiLock ™  AT bindings – three straps which go across the top of the boot, and one around the back of the boot to secure the heel in. If you’re not familiar with bindings, it’s worth remembering that they need to be pulled tight across the boot to stop the boot from ‘wriggling’ out of the straps and secured with the plastic clips that keep the straps in place. Throughout the day, these may need to be tightened, as constant movement will cause these bindings to become looser throughout the day. 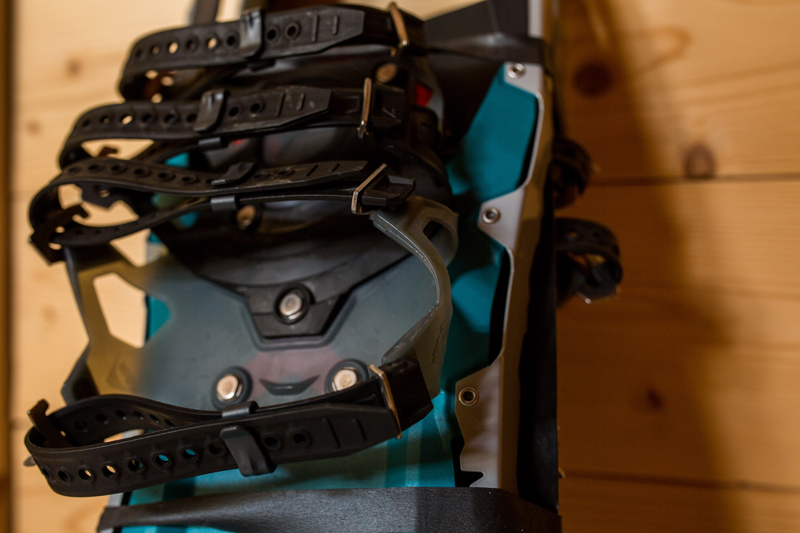 During the course, I was offered the opportunity to test the Revo in a number of snowy conditions. On hard frozen ice, (such as walking on the ice formed on the high mountain tracks overnight) the built-in crampon provided extra support on steep terrain that would have otherwise made it very slow to make progress. The crampon remained sharp during the week of testing, although did show signs of some paint coming off on where it had been used on gravel/ road. It was a great feature, which could cope with the mixed winter terrain, whereas other snowshoes during the course suffered from weaker crampon points and snapped off. Additional ridged ‘teeth’ on the outer edge of the snowshoe made it easier to climb uphill and avoid slipping on the ice. 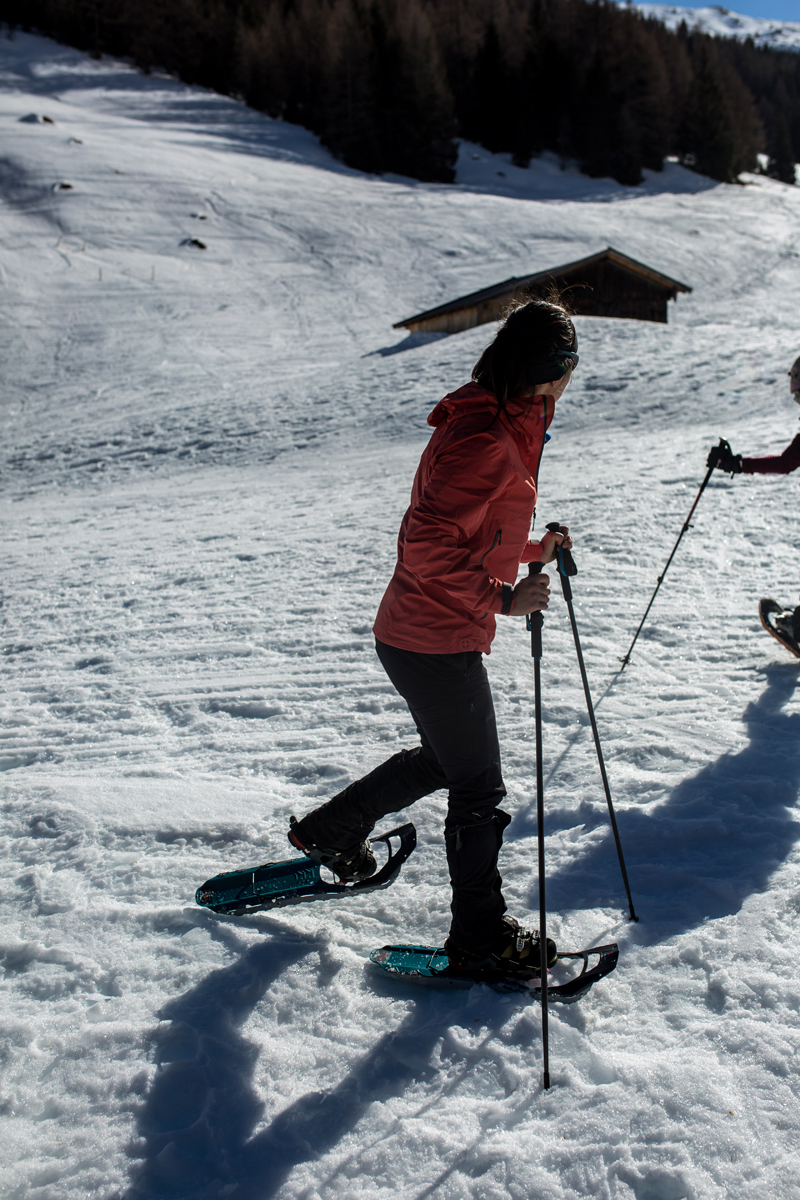 In the depths of the shaded forest or under cloudy snowy conditions, the snow crossed underfoot was much easier wearing snowshoes then without, offering greater purchase and steadiness when going through deep snow. It felt like my legs were getting a steady cross fit workout! Moving downhill, the snowshoes required a wider ‘John Wayne’ cowboy like stance to avoid catching the other snowshoe on our descent.
However, the weather decided to throw another spanner into the works… throughout the week, the UK and the rest of Europe experienced an unprecedented heat-wave, meaning the snow started melting at a rapid rate. The snowshoes still offered a good deal of support, despite moving through thick, melting snow with the consistency of porridge.
Climbing uphill on a south-facing slope, which should have been very tricky to climb without snowshoes, the Revo Ascent Snowshoes also had a feature known as the ‘Ergo Telvators’ which are a foldaway ‘wire step’ which can be lifted easily so the boot doesn’t have to pull as high each time you move uphill. This can be done using a walking pole, to avoid bending down and tripping over your own feet. 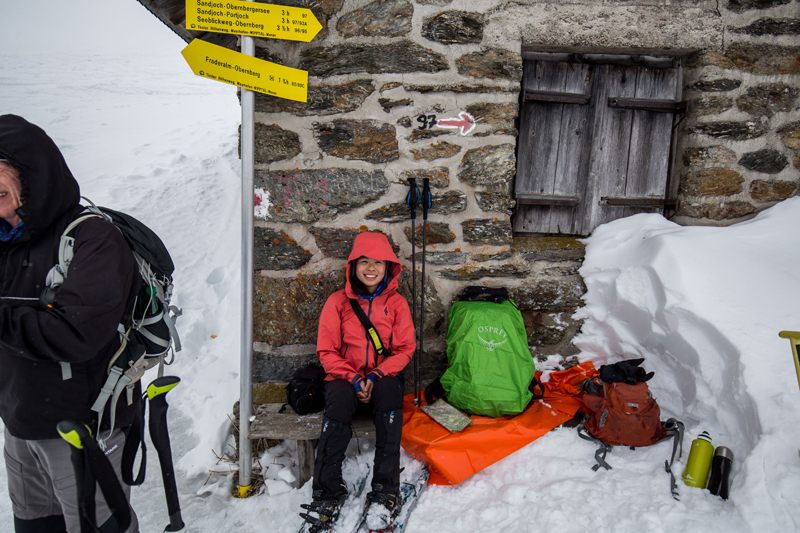 Weight wise, at 1.96kg the snowshoes are fairly heavy, at nearly twice the weight of a pair of crampons. They are 300g heavier then MSR’s Lightning ascent (also available as a women’s specific fit), yet the extra weight can be accounted for the more durable and wider span of the snowshoe, and more durable crampon. They are also fairly bulky, but did manage to fit in my hold luggage. I’d be reluctant to bring them in the cabin luggage due to the sharp crampon fitting, but they were possible to fit into a large suitcase without needing to purchase an extra large bag to transport them in. 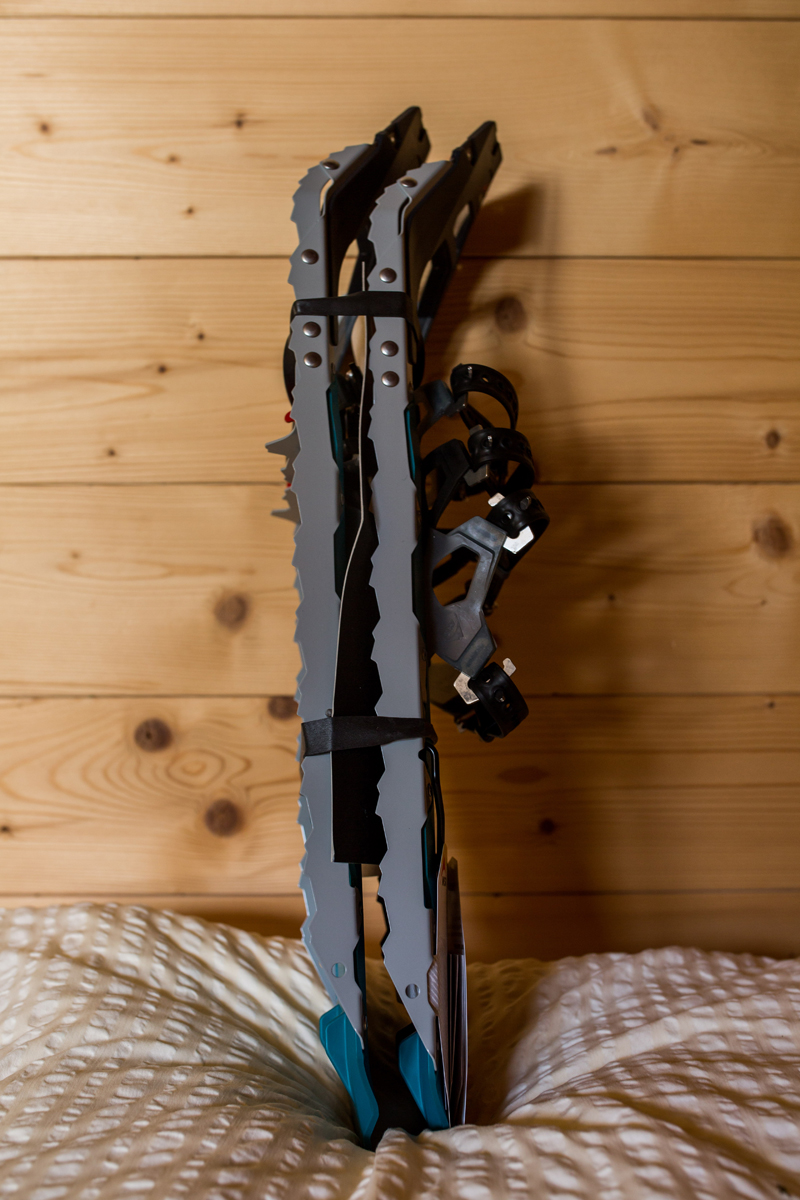 In terms of looks, the snowshoes have a bold colour palette, the main body of the snowshoe is a ‘Dark Cyan’ with a contrasting red crampon. As someone who wasn’t that familiar with MSR’s winter products, the snowshoes drew plenty of compliments from other students on the snowshoe’s course.

At £220, the MSR snowshoes cost more then you’d expect. They are worth the purchase if you’ve tried snowshoeing before and plan on making several trips either hut to hut/ winter days out in snowy, Alpine conditions. For those who have yet to experience the sensation of strapping two ‘tennis racquets’ to your boots, I’d recommend doing a course and getting used to how they feel on different types of terrain.
As a piece of kit which allows users with basic winter mountaineering experience the opportunity to cover greater distances over mixed terrain, snowshoes are a worthy investment and made my trip to the Wittal Alps, in South Tyrol, Austria an adventure in mixed winter conditions.

MyOutdoors @MyOutdoors
RT @MountainResqUK: 14 #MountainRescue teams are among 50 charities who will receive a share of £1 million in funding from the Department o…

MyOutdoors @MyOutdoors
RT @DavyWA: The Halo 25 from @lowealpine is an everyday use pack. Laptop / tablet sleeve, loads of internal pockets and a full size front p…

MyOutdoors @MyOutdoors
RT @MyOutdoors: To walk with no final destination, to run with no race to win, to climb because it's there; that's why most of us fall in l…