When I took delivery of the Sense Mantra 3 last year I ended up using them on the road more than the trail. Living in a city and having to run to the trails, more often then not, my trail shoes share 20-30% of their time spent running on man made surfaces. What I noticed was the grip, way above that of an average road shoes. 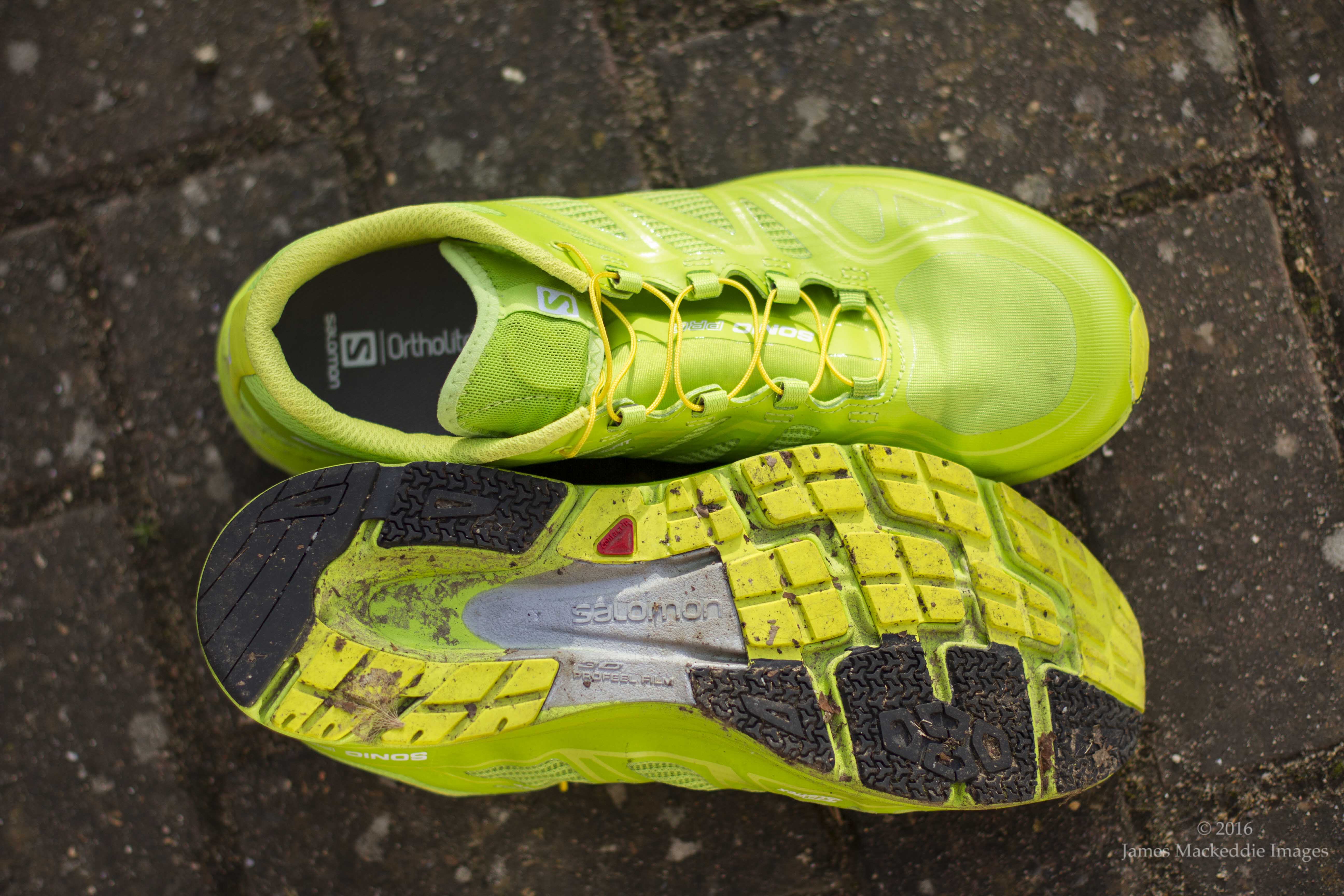 Around the same time, Salomon launched their X-Series shoe, which saw Max King and Ellie Greenwood taking to the road. It was a statement of intent and this season, the brand have added to the range, giving their trail following an alternate offering.

The Sonic Pro have been wrapped around my feet of late, whether pounding the streets of cities or walking around more mountainous towns areas such as Keswick and Coed Y Brenin.

Pulling them out of the box I was struck by the colour. Bold. Unlike many of their shoes which feature two main colours and various designs, the Sonic Pros are one colour throughout, including outsole (blue & green colourways). There is no hiding from these and it may encourage some runners to move that bit quicker.

At 240g they are relatively light and without lugs to worry about, grams have been shaved while increasing the midsole cushion.

The Contagrip™ outsole is hardwearing and is at home on dry hard pack trails as it is on tarmac. It can do more than simply grind out miles on the grey stuff. Low in profile, it doesn’t become a hindrance and the wear points have little signs of use. The 3D Grip rubber, has a compound soft enough to gain traction, but not so much that it’ll wear away like cheese being grated. 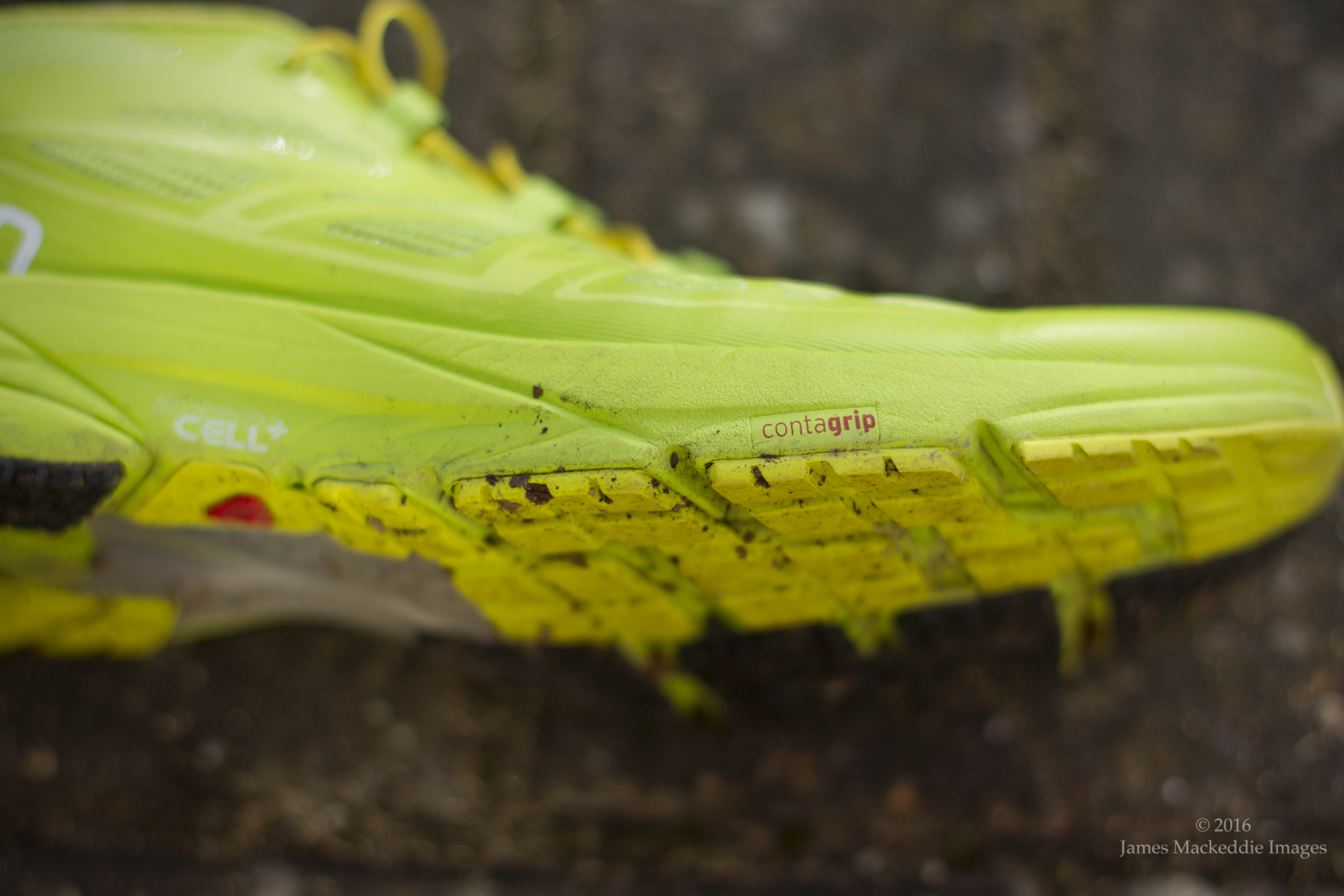 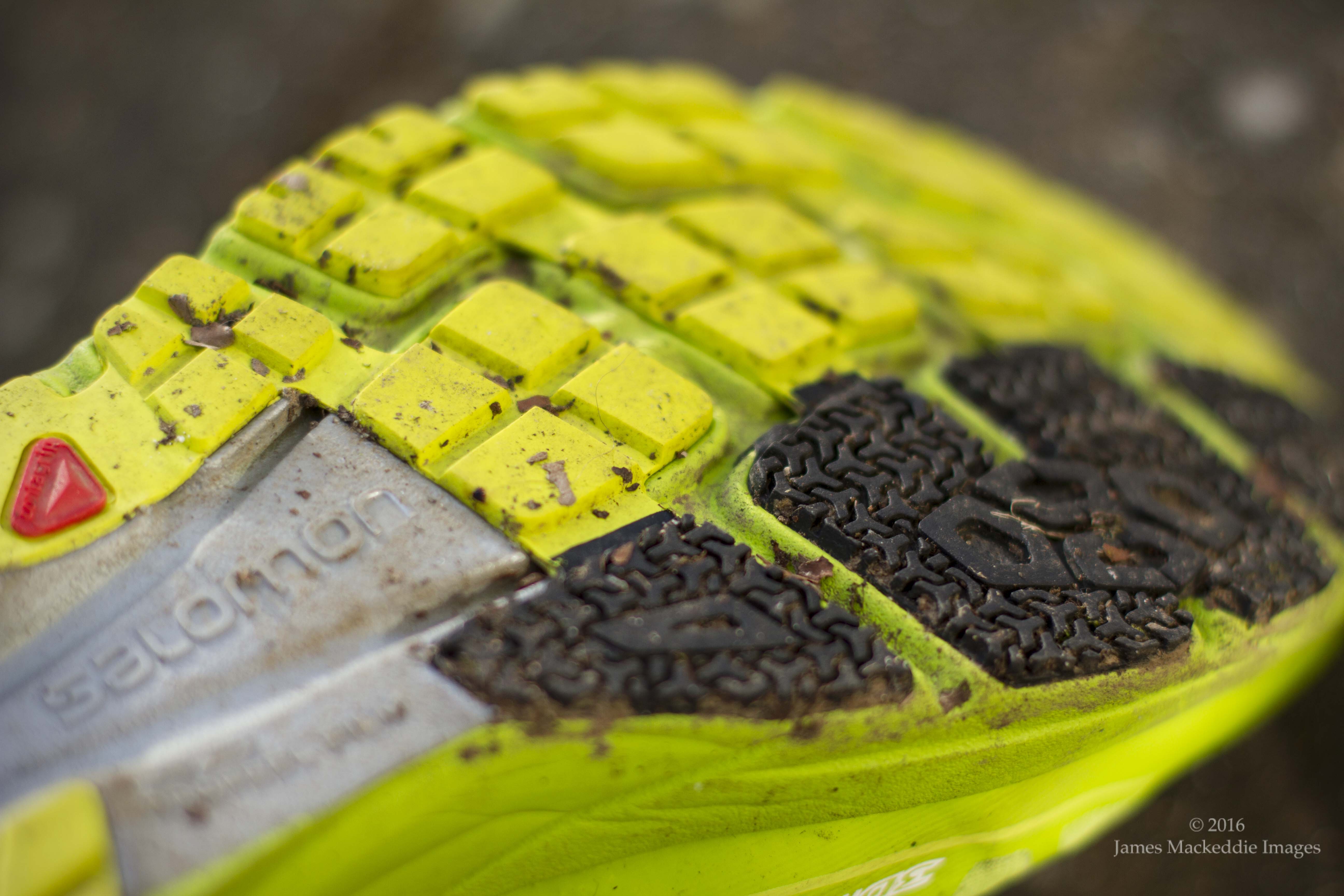 Moving up, the midsole is firmer than I expected given its road applications. I have become accustomed to road shoes on the whole delivering a plush layer of cushion, though I personally prefer something more aggressive and fast. I would steer the Sonic Pro towards those chasing fast PBs, where good efficiency and gait are part of your quiver. For those who may require a very supportive shoe, where you have a tendency to heel strike, you may wish to look for something aimed at you.

I’m not for one second saying they lack the support you would expect with a road shoe, or Salomon shoe to exact. The heel cup is a thing of beauty, it literally hugs your ankle, enveloping it in a protective grasp, preventing heel slip while keeping the structure firmly in place. But support has many different meanings and works for/against certain runners in several ways. 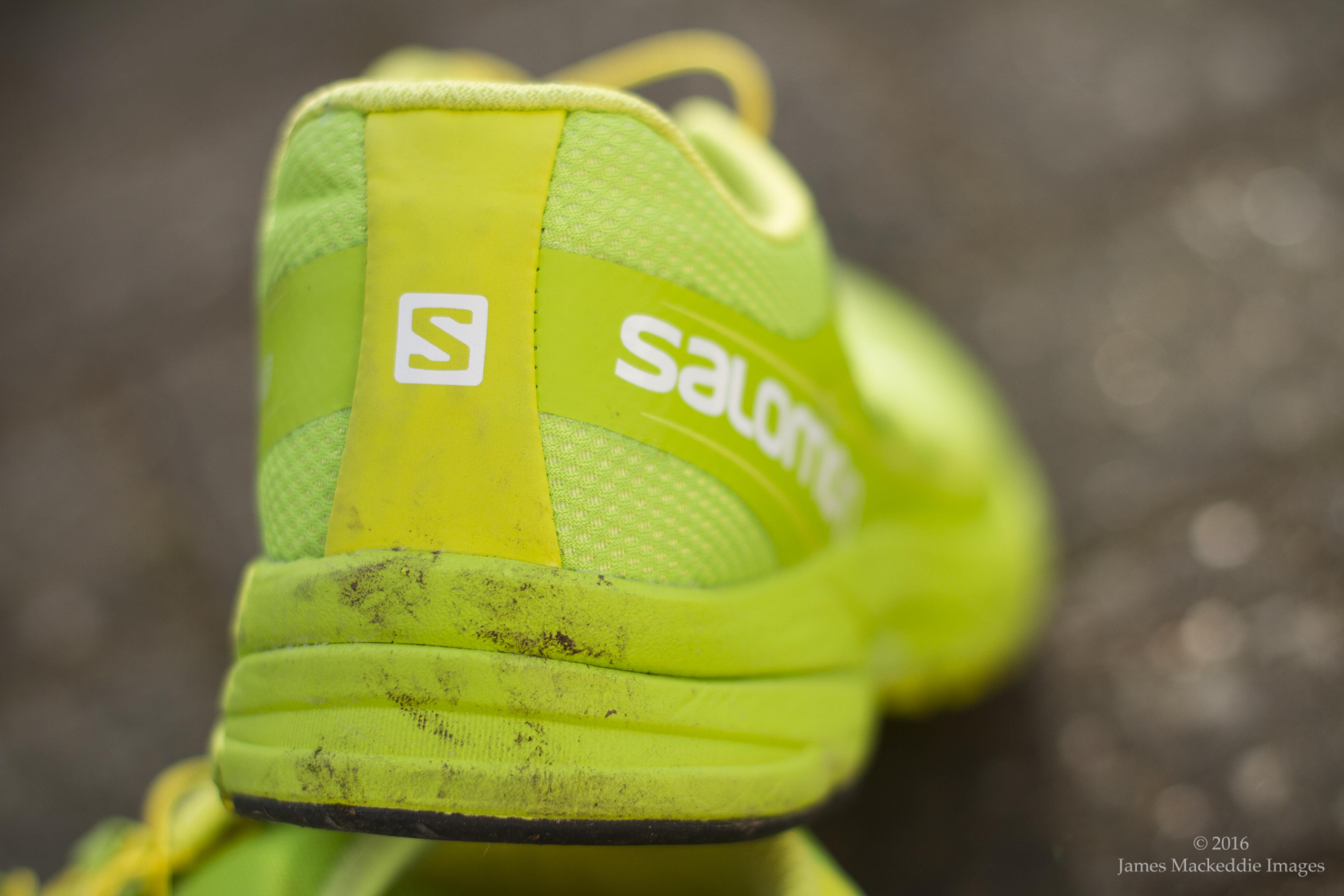 The toe box isn’t narrow or pinching, wider than the likes of the Speedcross. It allows you to splay your toes and make full use of the breathable upper.  The end of the toe rand does have stamped the famous “LAB” letters, harking to its race pedigree and development with Salomon’s road racing elites. The best way to describe the toe rand and the shoe in general is it feels like you have the transfer of trail protection to the road. Yes, it’s not built with large weld overlays, forming large rands surrounding the entire toe and sides, but you get a more protection than the dedicated road brands. Given a lot of us run on pretty badly kept paths or roads, jumping over pot holes, dodging the elderly and trying not to get run over by drivers with no special awareness, I like this. I get the feeling were I to have a run in with a kerb or other item, the Sonic Pro would shrug it off much better than many and survive to live the tale. 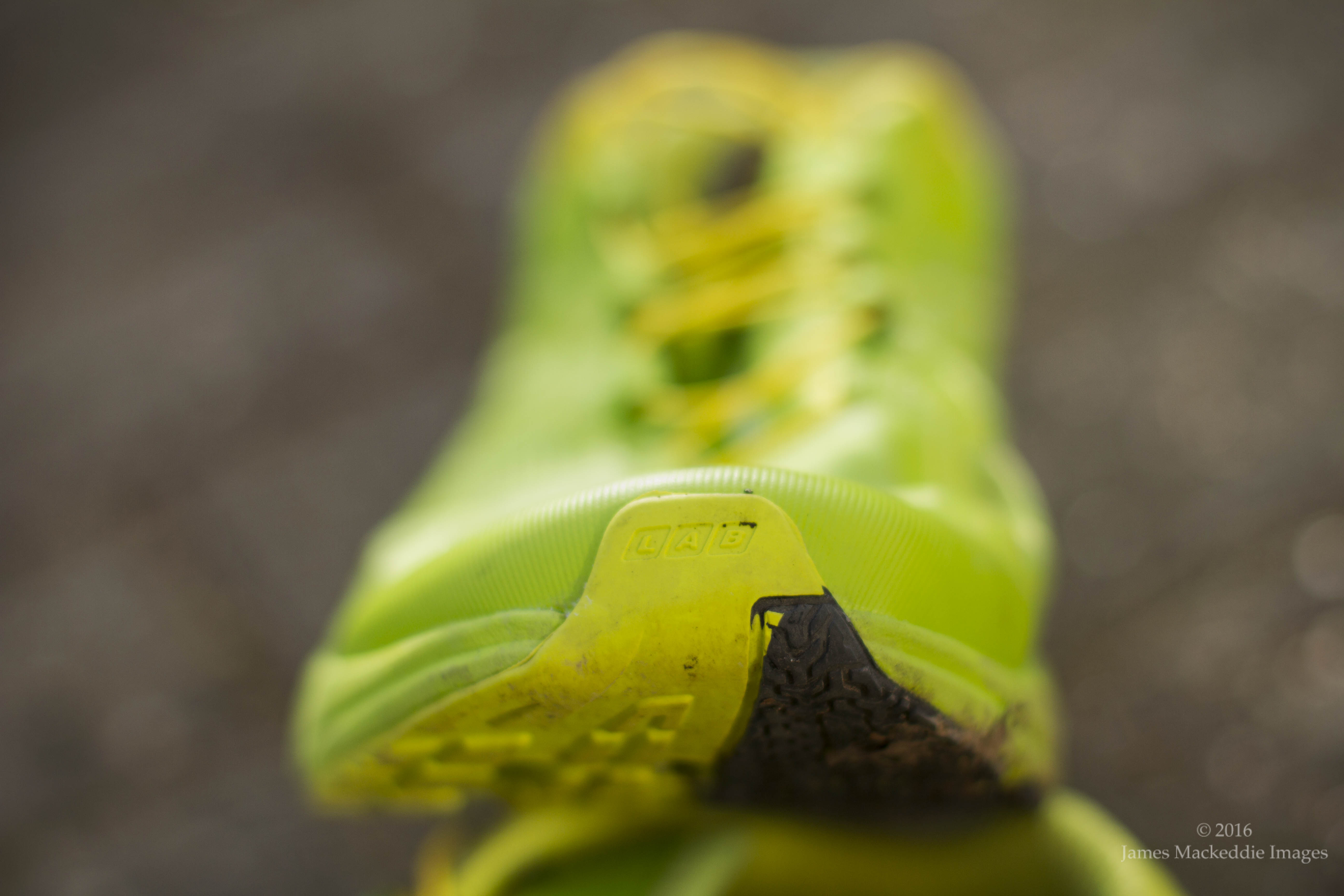 In the race to the bottom where weight is concerned, sometimes you need to compromise for durability, longevity and protection. This is what the Sonic Pro has it in spades.

The upper is constructed from 3D Stretch Air Mesh which allows your sweaty digits to breath whilst keeping any road side debris at bay. As I pointed to above, though you aren’t contending with the trail and all it throws at shoes, you need something that will last and giveback repeatedly. The Pro’s deliver. Combined with the 3D weld overlays, there is real structure around the food, on both lateral and medial sides. Combined with the Endoifit™, your foot is cradled in a supportive sleeve, which works in unison with the welds. Out of the box, they are snug, secure and precise.

The legendary Sensifit™ which is a staple of the Salomon range does its job as always and the Quick Lace™ is dependable and secure. Whereas many brands opt to change lacing system, lace style and diameter, Salomon are consistent. You can switch throughout the range and now how it will feel and lace up. 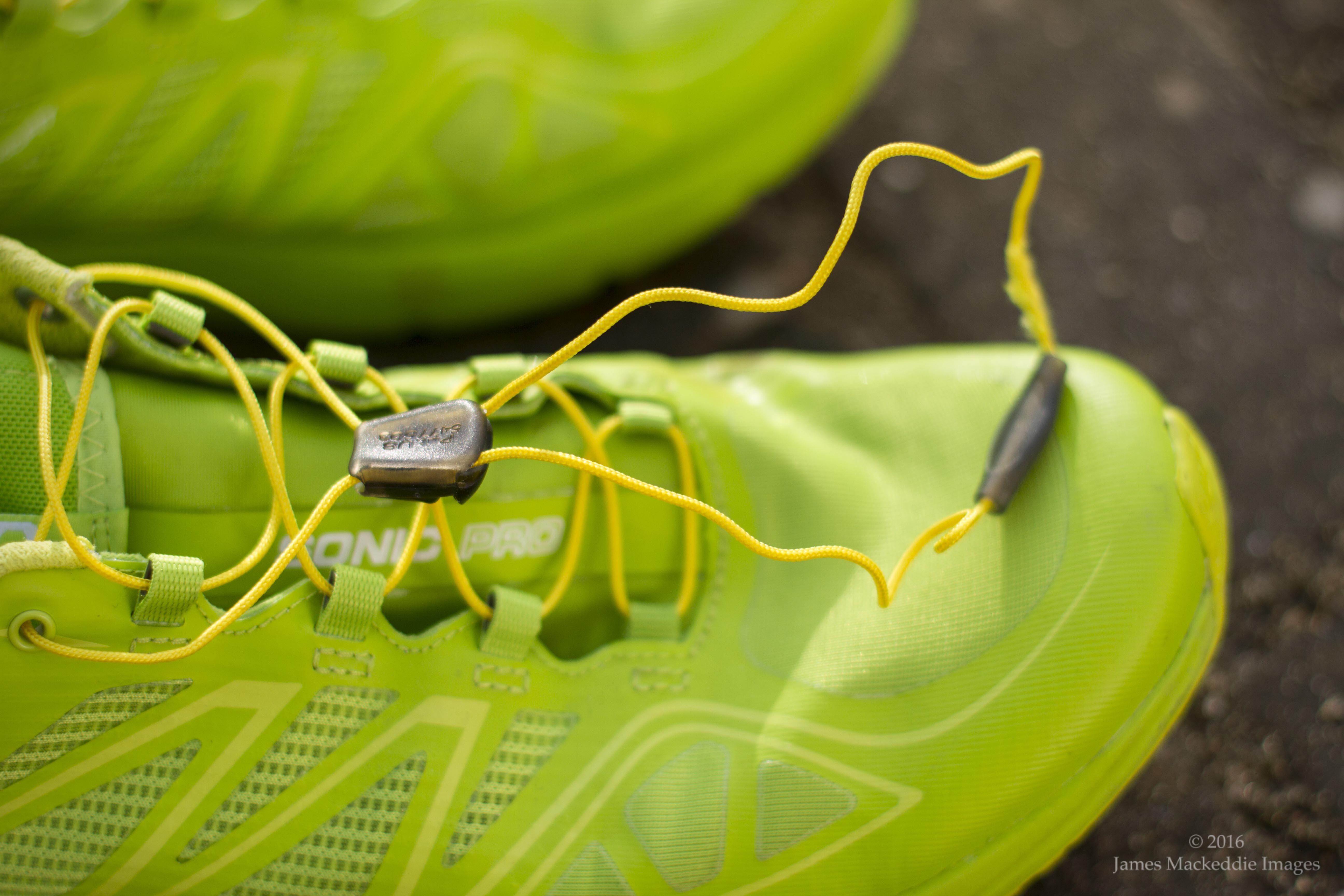 Now, that isn’t without slight issue. On the road I don’t lock the laces down as tight, given the trail wont be sucking them from my feet at every attempt. Well, in the UK atleast. I did find I couldn’t pull, tuck and go like normal, and do spend a little extra time fine tuning, but that’s a minor niggle. On the medial side of my right foot I did discover a hot spot initially, but this was resolved with some lace tweaking. Now I know, it’s not an issue and I can go back to my old pull, tuck and go.

Like I always try to mention, everyone’s feet are different, so what effects me may well not affect you. Speaking of which, I sized up half a size from a 9.5 to 10 UK men. For me this is consistent throughout the range, and I know I can go from Fell Raiser to Speed Cross, Sonic Pro to Sense Ultra and they will all fit. Try before you buy, you can’t beat sinking your feet into a new pair of shoes in a shop.

The insole, Ortholite™ delivers a comfortable ride and manages to keep runners stench at bay. I can put my hands up and say running shoes are banned from my car other than transporting to and from runs due to their unique odor. So far, these haven’t held onto smell producing bacteria. Long may that continue! 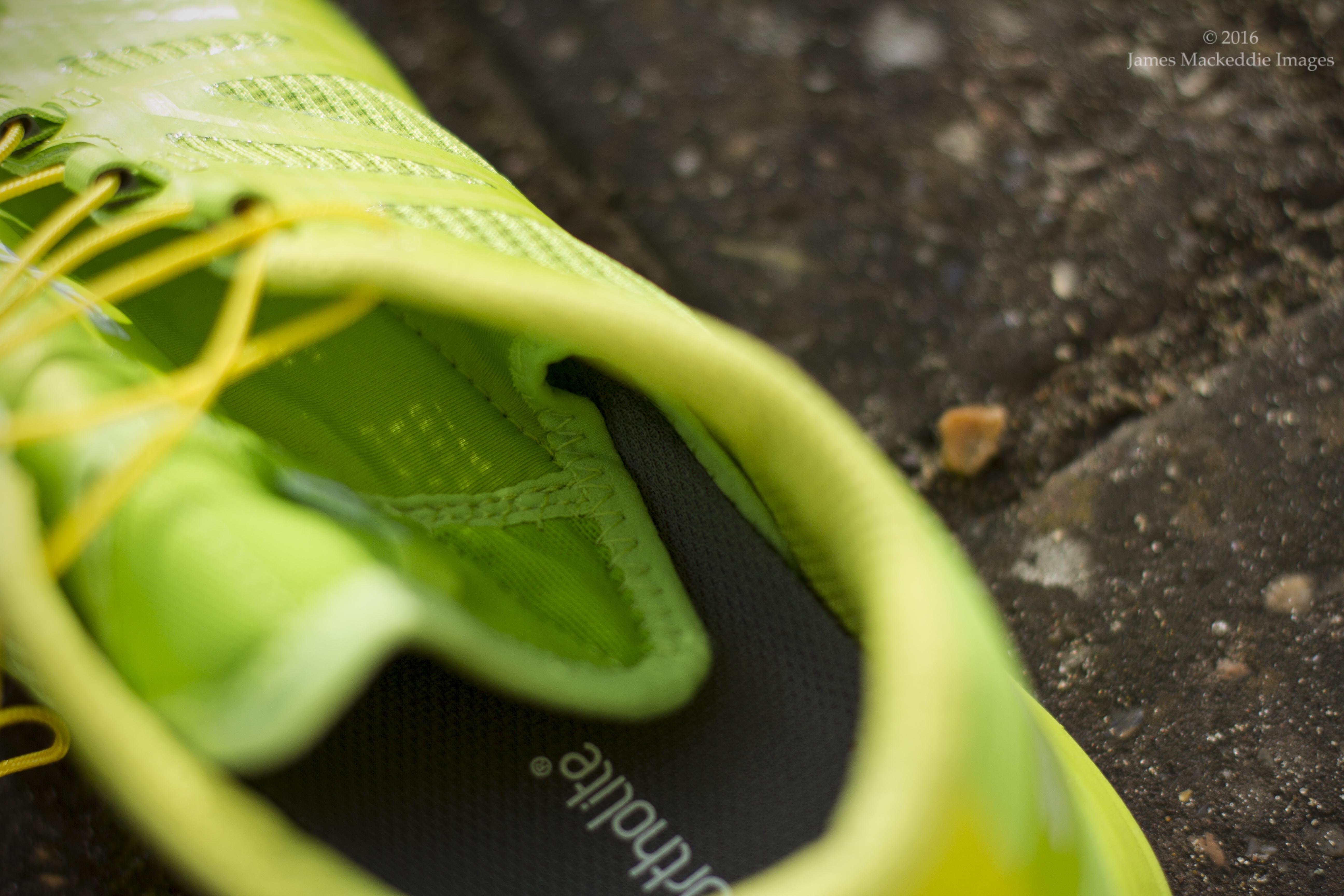 With a 8mm heel to toe drop, they are well suited to most runners. You’re feet don’t get tired when heading out for a couple of hours, which is aided by the less aggressive difference.

So the price. At SRP you’re looking at a healthy £110. Now before anyone puts up their placards in protest, you have high quality materials, construction and R&D.

Back to the colour. I like the bold approach and you can also get a solid blue, along with the famous red/black and black/red. It could be called an acquired taste, but in a market saturated with white mesh discolouring within a week, emblazoned with stich marks and noisy designs, to me they are refreshing.  If anything they’re badass. 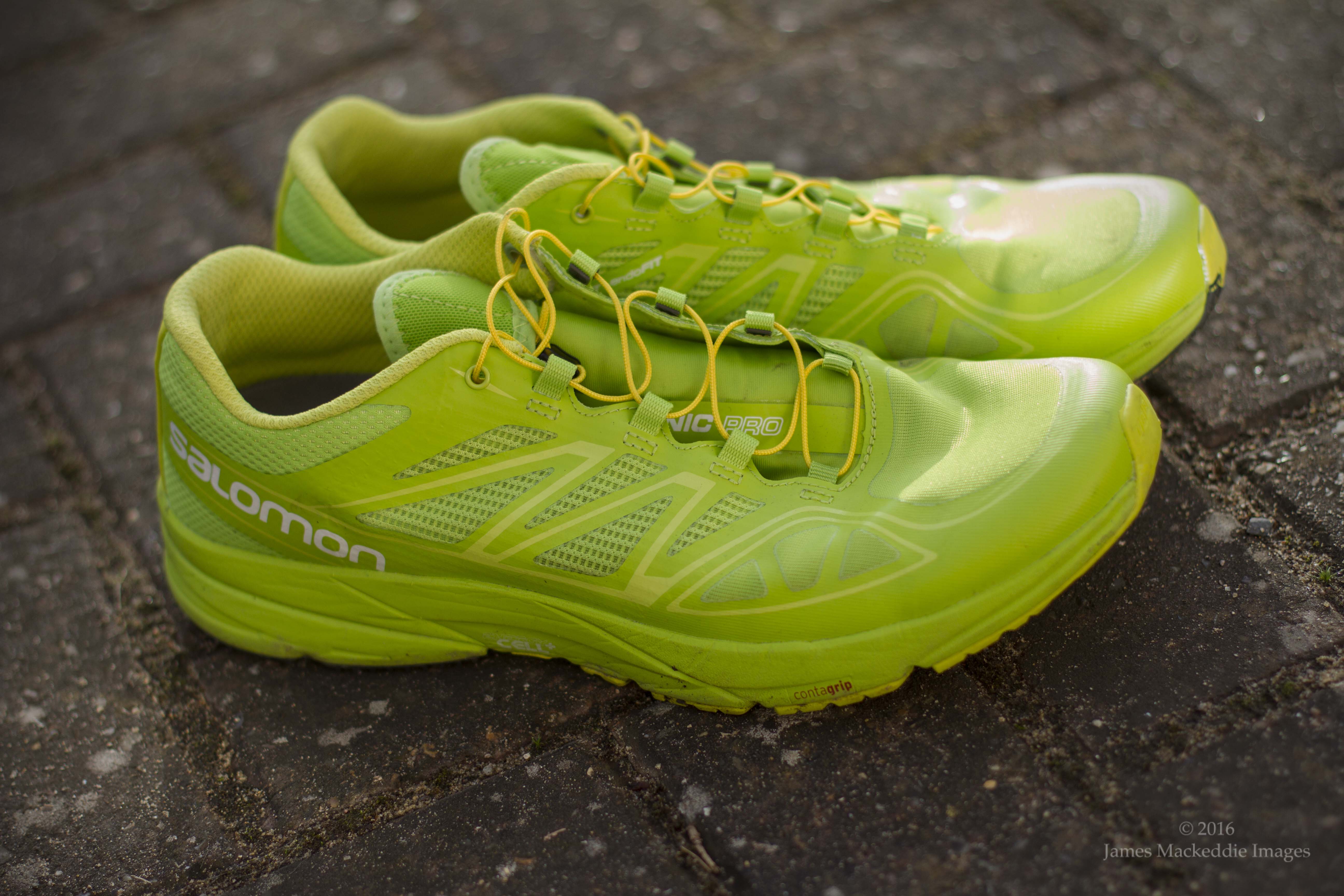 Design aside, I’ve really enjoyed testing Salomon’s Sonic Pro. For me, they are my half marathon PB shoes, and for others they would be suitable for taking that marathon start line. If I could change anything? A slightly softer midsole, purely for those longer distances (for me personally), but having put under 100 miles through them, who knows what the midsole will be like a 160 miles.

Salomon are making their intentions clear. The trail is where its time to play, but now you can also play in the cities, on the pavements, on all surfaces. Its time to play and there’s no excuse for shoes being the limiting factor.