Coffee on camp - a Rave review

Coffe's like beer, it's serious business when you're camping. Between the size of the grind, the length of the brew and the method of brewing the permutations go into the dozens - and that's without factoring the blend and strength of the coffee bean variety!

The core process of making a decent coffee remains the same; -You pour hot water over ground beans, leave it for a variable amount of time. Unlike with instant coffee you're left with a layer of used ground coffee to dispose of making "real" coffee; an issue you have to bear in mind when camping.  With so many possible permutations the obvious queston "what's the best coffee?" is somewhat meaningless. The best coffee for what? For who? For what brewing equipment? At it's simplest the issue is that you can take the same coffee, identical in every way, and make one brew in a cafitiere and another in a filter machine and get totally different results. Try the same grind in a press or a stove top brew and you'll have another two noticeably different tastes in the finished product. 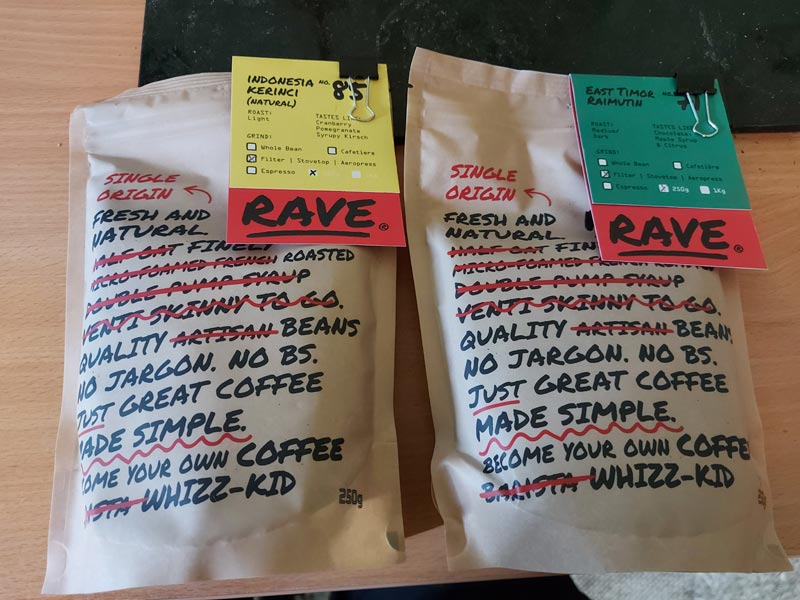 Understanding the process of making coffee from the field to the cup helps a lot when Rave sent us some coffee to review on camp it was a real pleasure to see they include a useful card explaining how light, medium and dark roasts depend on the length of time they're roasted for and how different beans suit different lengths of roast. In general terms a light roast will be "lighter" and a dark roast will be "stronger",  though of course the amount of time the coffee is brewed for will also be a major factor in the final taste too.

Because we all have our own individual tastes there is no "perfect" coffee but there are ways to make as close to the perfect brew for you as possible. The key is start with good qualty beans roasted to the right level and combined with the best water (soft and no more than 94C) for the right length of time.  Remebering that irrespective of the strength of the bean the longer you leave the water on the grind the stronger the coffee will be is an important consideration when selecting the equipment used. 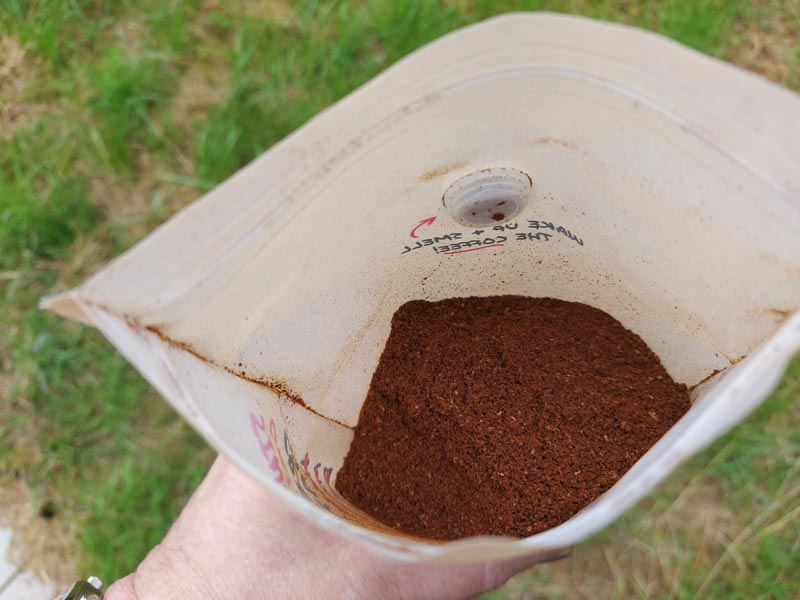 A Cafetiere works well for a coarse grind and for making larger volumes for mugs rather than espresso shots. Ideally you steep the coffee in hot water for 4 minutes without touching it then stir and leave for a further 5 minutes, so you're looking at around 10 minutes including measuring.

A filter coffee can be made either directly into the cup/mug or into a large, usually glass, jug.  Using around 60g of coffee per litre of water it suits a brew of 3-6 minutes depending on the size of cup and again suits a coarse grind .

An aeropress, as the name implies, presses the water through the coffee rather than using gravity and as a result can produce a smooth cup in less than 2 minutes. Presses tend to be much lower capacity than a cafetiere or a filter coffee. To allow for a faster brew process a medium grind tends to work better in a press. The increased surface area of the grains of the grind allows the water to extract the flavour faster. Given the smaller capacity, with 1-2 person options common, the press has become a firm favourite amongst campers. The equipment is self contained and tends to be both small enough for a pack and having a metal case is much less fragile than a cafetiere or filter coffee jug. 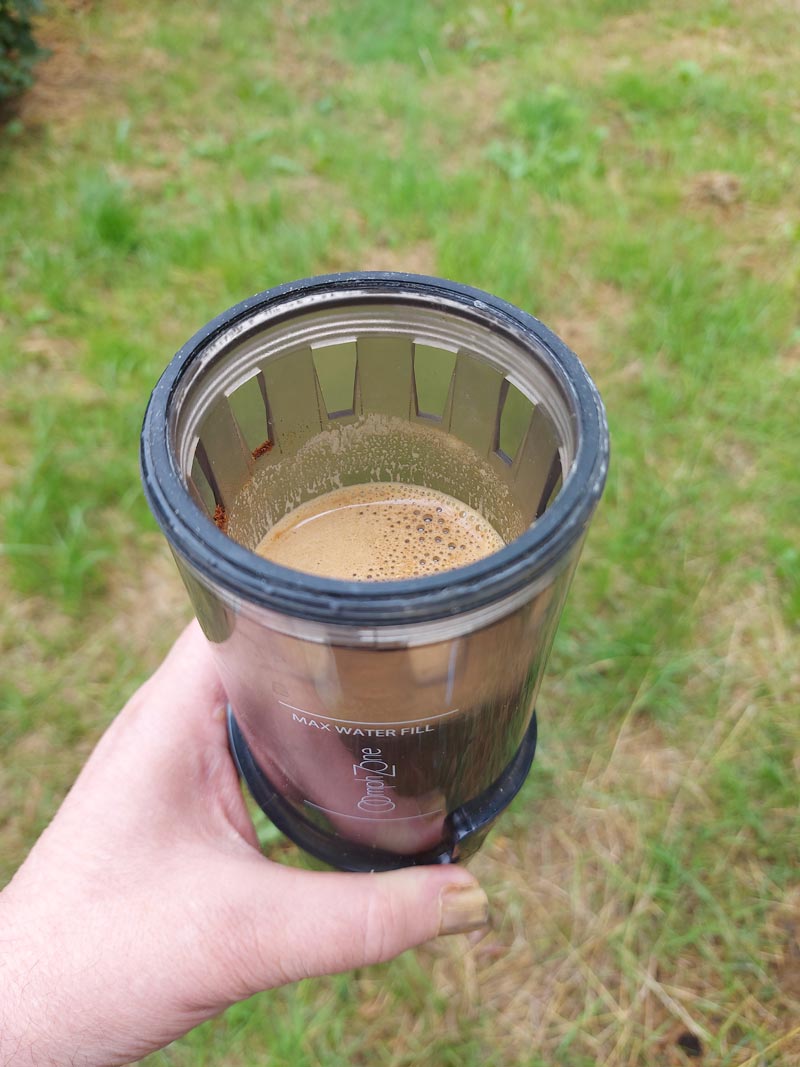 Stove top coffee is the classic coffee of countless early 20th century cowboy films of making coffee on a camp fire. With a stove top coffee the water sits on top of the coffee (seperated by a filter) for 3-4 minutes and you take it off the heat when the upper surface starts to change colour. Commonly called Moka pots this is still a popular method for many campers, particularly when an open fire is an option. In general a fine or medium grind works best in a Moka and the key is to NOT boil the coffee but gradually extract the flaours.

For non-camping use there's also the espresso machine/coffee machine but these depend on an electricity supply so we don't consider them as  ways for making a coffee on camp. Likewise there's a cold brew for iced coffee but fridges are few and far between when camping.

Rave sent us two bags of coffee, an Indonesian and an East Timor blend, for testing. Rave coffee comes with a vast amount of information on both its origin and the best ways to brew it making it ideal for the less experienced coffee maker.  Along with information on the origin (down to the altitude and farm it was grown) you get  flavour, acidity and best brew method information.  For those who are starting to notice the, sometimes subtle, differences between beans of different origin the information is invaluable with the brew guide even giving reccomendations of how many grams to use perc cup according to the method of brewing. 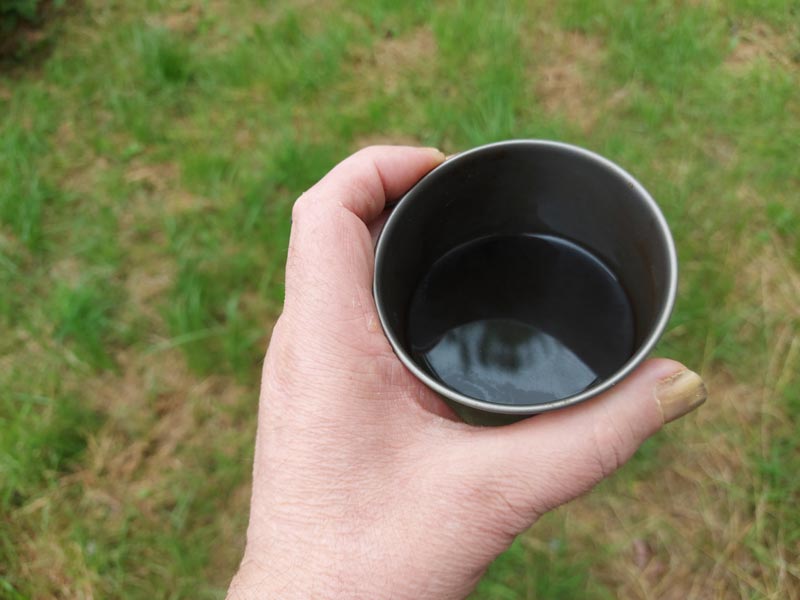 To date we've only tested the East Timor properly, using a cafetiere, a filter jug and a Oomph press to make several cups of varying sizes. As a medium/dark roast it's quite strong with an over-riding dark chocolate taste that becomes quite bitter if overbrewed. Get it right though and there's a bit of maple syrup sweetness that balances the bitterness and a slight citrus undertone that rounds it out well to make a very smooth drink for quite a strong coffee. It's recommended for filter coffee but in the field we found the shorter brew of a press was easier to get right without very careful measurements. After a couple of tests we settled for around 15g per 200ml using the Oomph for a strong but smooth  breakfast brew or slightly less for a filter coffee.

The East Timor blend has a distinctive taste, and makes a very smooth coffee for one with such a strong chocolate base. As a first try with Rave it was good to taste something this dinstinctive and it will be very interesting to compare with the Indonesean blend that's next in line.

More in this category: « Nikwax Cycling Kit: Tested and Reviewed
back to top

MyOutdoors @MyOutdoors
RT @BMC_Walk: It's just a year until @BorisJohnson is expected to lead global climate commitments at @COP26 Yet a year-long promise to ban…

MyOutdoors @MyOutdoors
RT @peakdistrict: ✅ We are extending the bike hire season right through the Autumn-Winter at #Ashbourne and #Derwent https://t.co/4LNXZCrT…