OMMers devour the Clyde Muirshiel Regional Park – But the Park bites back!

A sunny Kelburn Castle provided the start line facilities for OMM 2019 thanks to the generosity of Lord Glasgow and his team.

With stunning vistas of Arran and direct access to the moors; the checkpoint studded hill sides were prepped and ready for the off.

Across the start, the competitors said goodbye to dry feet with the first ascent ankle deep in mud and littered with invisible knee deep hazards.  There’s a few tactics when dealing with hidden boggy holes; one, go slow, test the ground before committing a foot placement or two, the ‘sod it’ tactic to march on in some kind of bog roulette effort.  After the first 10km you could see the competitors embrace the second and the inevitable boggy abyss of the terrain. 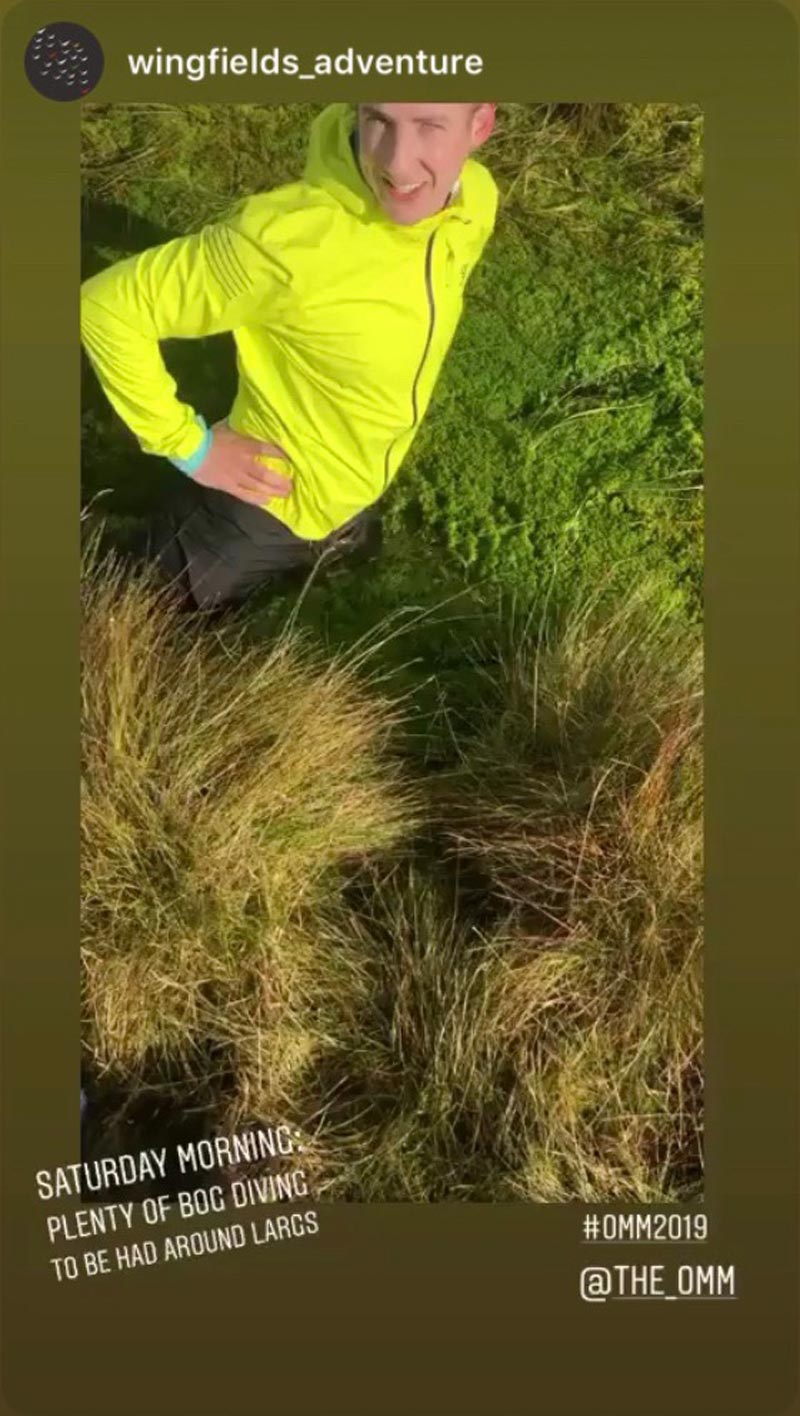 The 200km2 quickly silenced critics as it revealed its challenges.  Endless ascents and descents over bog, tussock and heathery fells pushed even the hardiest of competitors to their limits.  This rarely visited by ‘normal’ outdoor folk area provided sparse, if any, path sightings leaving the relentless terrain to be tackled head on.  Many will have experienced waist level submergence; one even described his team-mate flagging down 4 passing competitors to assist his release from an armpit deep dunking.  It was a weekend of ankle and knee obliteration, with so few paths to be found that from ‘plodders’ to ‘elite’, we all faced one hell of a challenge.  As Jim McQuaid & Dominic Watts said “you knew it was only a matter of time until you were swallowed by a bog.  You just hoped your shoe was still there when you pulled yourself out”. 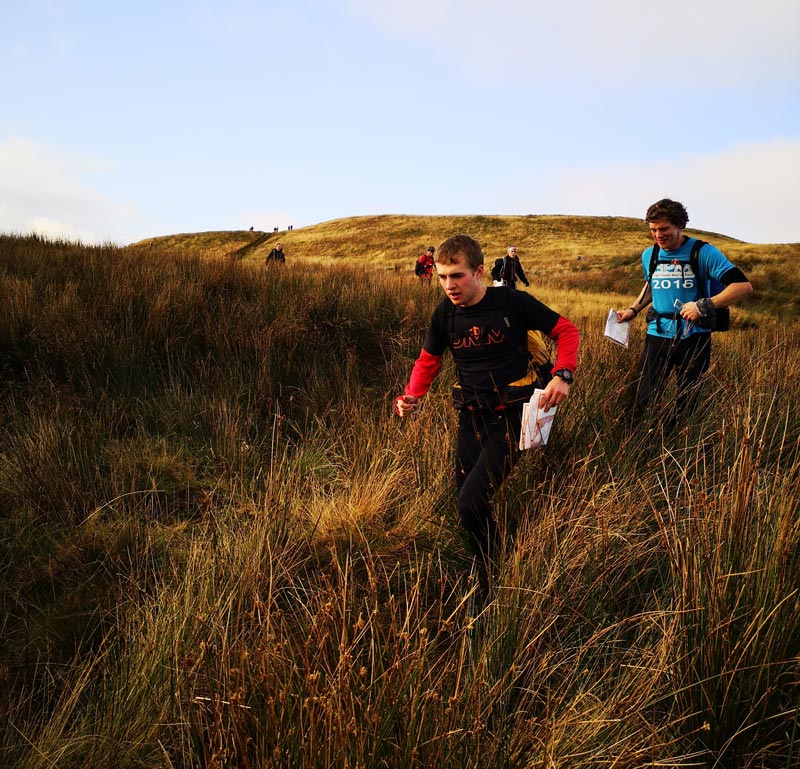 The Mountain Marathon was created to be a test of mountain ability.  The strength and training to see who can run the hardest combining with the experience and navigational skills to pick the best route.  The undulating non-descript features were expected to favour the orienteers.  However, the sun shines on those who deserve it and perfect visibility changed the challenge to focus on route selection and hill observation to find the most forgiving passage.  Heavy rains and hail fell overnight just to remind the hunkered down campers that this was the OMM but only short showers flashed through on day two and teams enjoyed great views to ease the navigational challenge. 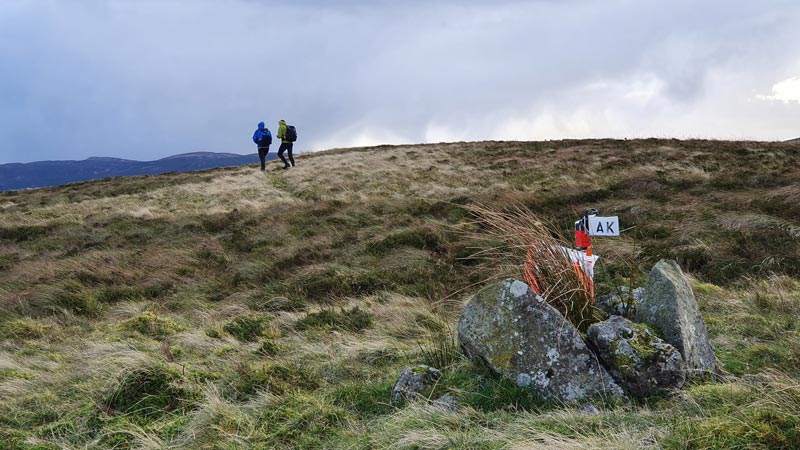 This year Graham Gristwood & Hector Haines won the Elite Course in 12hrs 48mins after developing a lead of 25 minutes at the end of day 1.  The race for second was much harder fought with only minutes splitting second to fifth place.  In the end Alistair Masson & Tim Morgan hung on to take second overall pushing Dark Peak Runners Tom Saville & Nathan Lawson into third.

The Long Score competition equally took in some distance.  The overall winners Nick Barrable & Jonny Malley scored a massive 1240 points in an estimated 80 kilometres with 2500m of ascent.  In the military class the Hutton Trophy was won by Calvin Routledge & Max Cole with 1030 points (4th overall) and it was an honour to have Colonel Jim Hutton’s cousin, Alison, join us to present their prize.  The  female winners were Bodil Oudshoorn & Janie Oates of Helm Hill with 815 points (18thoverall) and the first place mixed team was John & Corinne Watson with 800 points (21st overall).

The A & B courses pushed their competitors hard too with extended running times forcing most competitors to break out the headtorches as they streamed down the hillsides late into the night.  It will be interesting to see who will be the next from these groups to step to the Elite challenge. 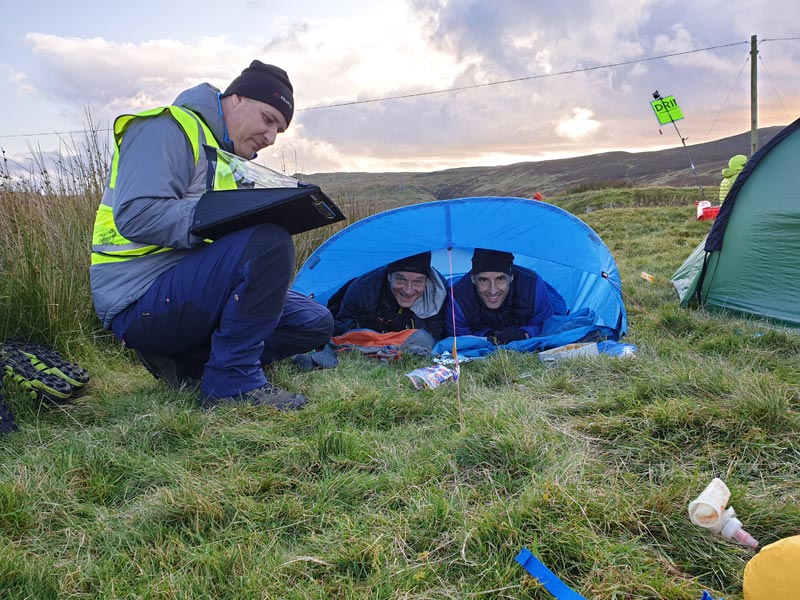 There are too many outstanding performances to mention but a couple of note from our younger competitors; an incredible result to 19 & 17 yr old Louis & Jura MacMillan wining Medium Score and Rachel Duckworth aged 16 of Derwent Valley Orienteers achieved  3rd overall on Short Score running with Dad John.  It’s great to see new talent entering the field.

At the more experienced end of the field,  Chris Kelsey joined the 30 year club  while partnered by his son Ben after a gruelling 21 hours to complete the Elite course, their first Elite finish and an impressive demonstration of endurance. 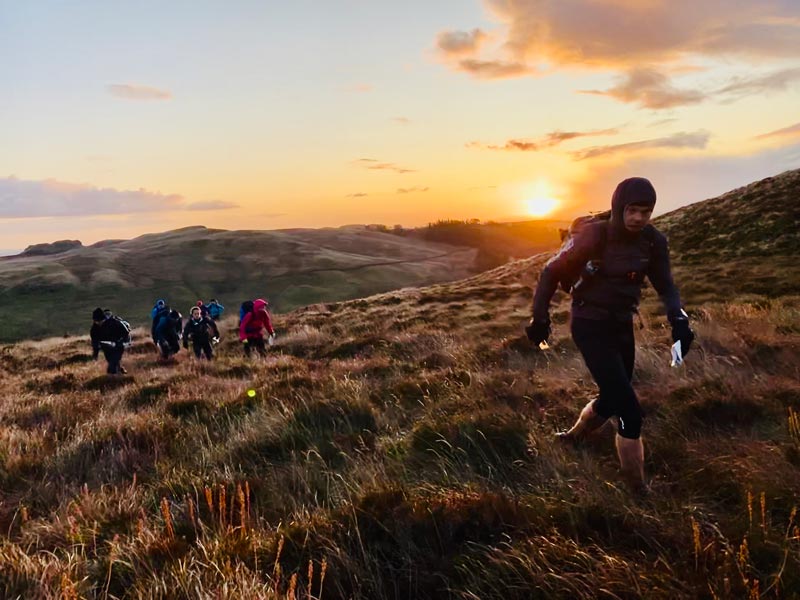 The OMM continues to push for a greener approach and thanks to all who car-shared.  This reduced the car count from 700 to 400 which is certainly a huge environmental positive for the event’s carbon footprint, an issue which is deep in all our hearts.  Given the mud on the car-parking field it was also important for the safety of the car-parking team. We had a mild panic while helplessly watching the ‘towout’ tractor gathering pace sideways down a muddy  hill towards the marshall’s cars which occurred whilst it attempted to tow a van with trailer to terra firma.

Next year the 53rd OMM will be the 24+25th October.  Stuart Hamilton, Event Director, says “It’s important we keep the challenge fresh.  This year many were sceptical about what Clyde Muirshiel could offer.  What they got was some fantastic terrain challenges, enough height to burn the thighs and the huge visual contrast of the sea and Arran in one direction and the industrial scars of Glasgow in the other.  We felt that no area we have ever visited better exemplified why we must protect these landscapes and the OMM will continue to focus on responsibly bringing people to enjoy, use and ultimately become the protectors of this space.

Next year… well we’ll give you something different.  I’m looking to add some of the features we enjoyed on the Alps event this year so we’ve found somewhere that has rocky mountain tops, dense contours but ultimately still the remote open wilderness that we are so fortunate to be able to enjoy in the UK.  I look forward to being able to reveal more.”

More in this category: « Runners tough it out in the inov-8 Descent Race mud The Marathon des Saveurs - a flavour of Switzerland »
back to top