Runners tough it out in the inov-8 Descent Race mud

One of the world’s most daredevil sporting events took place at the weekend as runners plunged down a near-vertical ski slope.

Brave entrants from across Europe took part in the inov-8 Descent Race on the legendary Streif – a slope on the Hahnenkamm mountain in Kitzbuhel (Austria) that has a gradient of 80% and is regarded as the toughest on the world cup ski circuit.

The second staging of the annual race was held amid an alpine rainstorm, making the course extremely muddy. Most runners used special graphene-enhanced shoes provided for free by race sponsors inov-8 to get tougher grip in the slippery conditions.

The men’s winner was Markus Wiltschnigg who, despite suffering a shoulder injury, proved to be the master of the downhill mud. The 27-year-old trail runner from Styria (Austria) claimed the €300 cash prize and said: “I ran as fast as I could and took chances. I have no regrets at all. What a race!” 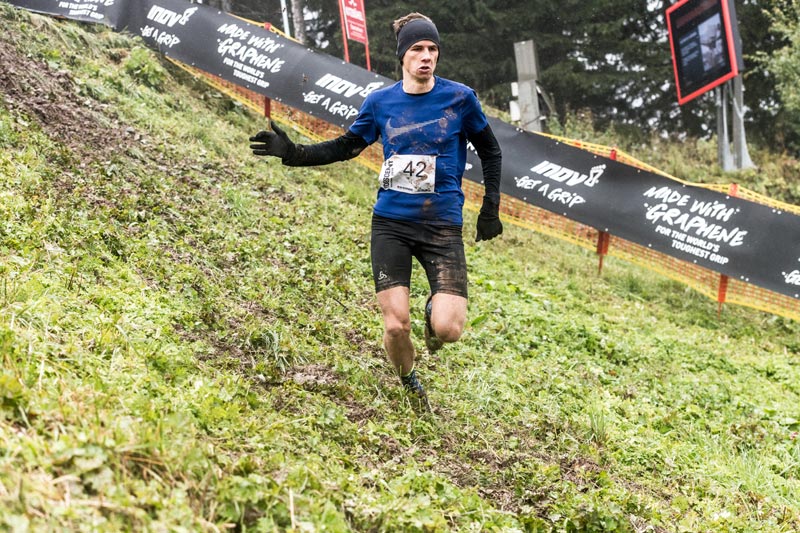 Entrants of all abilities started at one-minute intervals from the iconic ski house on the mountain summit. They then weaved their way down the hill, on a 350m course marked by ski flags.

Each runner completed it twice, with their times added together for the overall results. Markus flew down in 58.54secs and then 56.87secs for a combined winning time of 1min 55.32secs.

Fastest woman down the treacherous slope was Carina Polzer, who made it look easy with times of 1min 22.40secs and 1min 21.24secs. Her combined time of 2mins 43.64secs put her ninth overall. 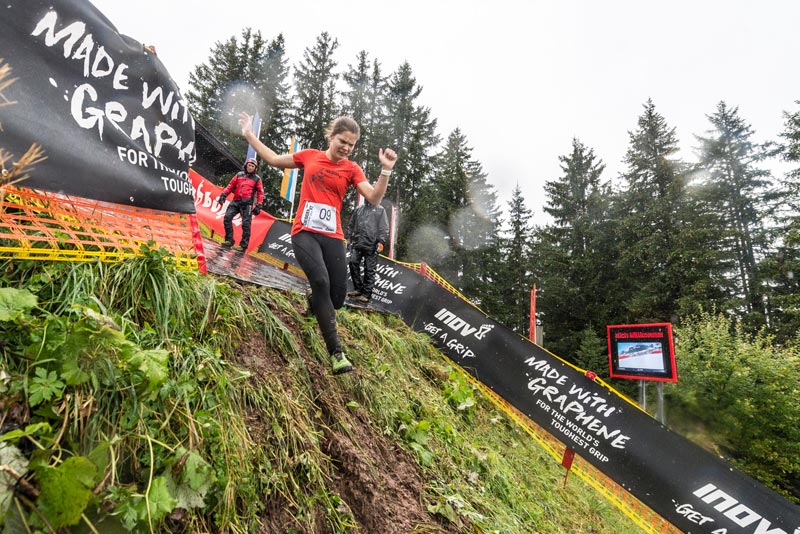 The 23-year-old Austrian international orienteer, who is studying medicine in Innsbruck, also won €300. She said: “It was my first downhill-only race. I was nervous, but once I jumped out of the start-house I found my legs and shoes capable of handling the demanding course. I was able to switch off my head and just follow my feet down the hill. I really enjoyed it and can’t wait to do it all again!”

The race was organised by Georg Uberall, an outdoor sports retailer from Kitzbuhel, who said: “The conditions were certainly special, so I was all the more pleased that so many came to race and that everything went well.”

Lee Procter, Communications & Ambassadors Manager for inov-8, added: “Everyone got to grips with the muddy course and demonstrated both skill and bravery to tame the world’s toughest ski slope. We loved seeing everyone play dirty in the mud, share in the camaraderie of the day and, in some cases, overcome fears. We look forward to returning to Kitzbuhel in 2020.”

More in this category: « Tor des Géants Beautifully Brutal 10th Anniversary – Presented by Montane OMMers devour the Clyde Muirshiel Regional Park – But the Park bites back! »
back to top