One of the greatest non-stop mountain endurance races in the world returns bigger and more brutal for its 10th anniversary.

The Montane Tor des Géants returns for its 10th anniversary on 6th September, 2019. To commemorate this landmark occasion, the tenth edition features four races through the wild and spectacular landscapes of the Italian Alps. This includes the new, epic Tor des Glaciers, a competition that may never be repeated, and the new, shorter 30km/19 miles Passage au Malatrà.

First launched in 2010, the Tor des Géants (TDG) immediately became one of the hardest non-stop races in the world. Covering 330km/205 miles of secluded trails in the Italian Alps with 24,000m/70,880ft of ascent, running the TDG is the equivalent of climbing Mt. Everest nearly three times in less than 150 hours. In 2016 Montane, a sponsor of the world’s toughest endurance races, joined the Tor des Géants as partner. Since then the TDG has grown to a four race program in 2019, with all four races selling out well in advance.

“We pride ourselves on actively supporting some of the most brutal and uncompromising races, ones that create environments that our clothing is designed for and feats of endurance that can test the most competent athletes in the world. The TOR is a talisman of this special breed of race, and are privileged to be a part of such a landmark anniversary.’  - Terry Stephenson, Montane. 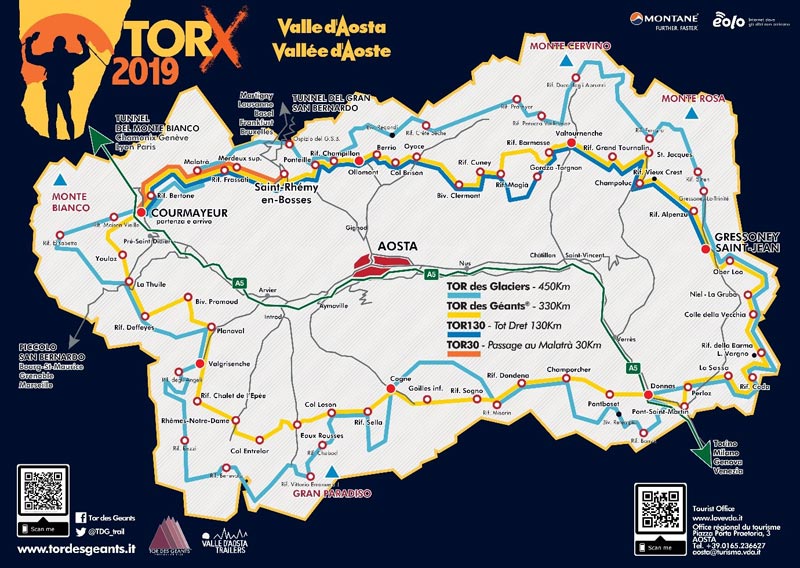 The 10th anniversary edition of the TDG features the first Tor des Glaciers, an impressive new race. Bigger than the “classic” Tor des Geants, Tor des Glaciers spans 450km/280miles of remote trails and a staggering 32,000m/20 miles of ascent in less than 190 hours. Runners eager to go the distance quickly snapped up all 100 spots for the inaugural Tor des Glaciers in less than two-minutes.

Team Montane is busy training to compete in the “classic” Tor des Géants, among a field of more than 800 entrants from more than 60 countries. This year Montane will be represented by an elite team of international athletes including Galen Reynolds of Canada, who took second place in 2018, and Kaouta Toriumi of Japan who finished fifth. Also returning are Montane athletes Jenn Gaskell (UK), Simon Gfeller (ES), Kevin Hadfield (US), Tom Hollins (UK) and Julio Cernuda Adlecoa (ES). New to the race and looking to make their mark are Montane athletes, Stefano Serena (IT) and Luca Molinari (IT).

“The TOR is an entire experience, far more than just an ultra. It's an epic journey that will test limits in every way possible and push beyond anything you thought previously possible. The continually changing terrain makes sure everything is severely stressed. With the help of the great race organisation, countless enthusiastic volunteers, cheering locals, other runners and some of the best mountain scenery this impossible task becomes attainable.’  - Galen Reynolds, Montane Athlete.

The Tor des Géants is also one of the best ultra marathons to watch remotely. Via the Tor des Géants website, spectators from around the world can watch a map showing each athlete’s live position.

A recent Montane Athlete and based in London, Galen is fast becoming a force to be reckoned with. He finished second in 2018’s TOR (7th in 2017), and has already won the Berghaus Dragons' Back Race earlier this year.  In achieving the latter, he also broke fellow Montane Athlete Marcus Scotneys' course record.

A Montane Athlete since 2009 and obviously no stranger to a challenge, Jenn has competed in the TDG twice already, while simultaneously working to complete her mathematical physics PhD at the University of Nottingham. Her first race was a mountain marathon in Charomix with over 2500m of ascent

Tom has been running ultra distances for a number of years. He first made his presence felt in 2013 when he took first place at the 10 Peaks Lakes (long course), and has since won iconic races such as the Montane Spine Race and Yorkshire 3 Peaks Ultra.

Joining the Montane Athlete team last year after a prolonged hiatus due to injury, Terry is poised to make up for lost time. Despite this break, he finished third in the Montane Lakeland 50 in July, and his Montane Lakeland 100 course record still stands at 19:50. This year he takes on the 130km Tot Dret.

More in this category: « Running up that hill - trail running Switzerland's Valais with the pro's Part 2 Runners tough it out in the inov-8 Descent Race mud »
back to top