It looks like Britain. The weather is familiar – if a tad windy at times. The people are British. The landscape is very familiar, the hills and mountains near Stanley are reminiscent of North West Scotland and very similar in topography to the Suilven area. The underlying rock is a quartzite which weathers similarly to the Torridonian Sandstone, Lewisian Gneiss and Cambrian quartzite. The very prominent Mount Two Sisters is classically carved and scoured by glacial ice to make two prominent rocky peaks, somewhat like Nunataks. The height is also similar to N W Scotland, the highest peaks are just over 2000’/700m. 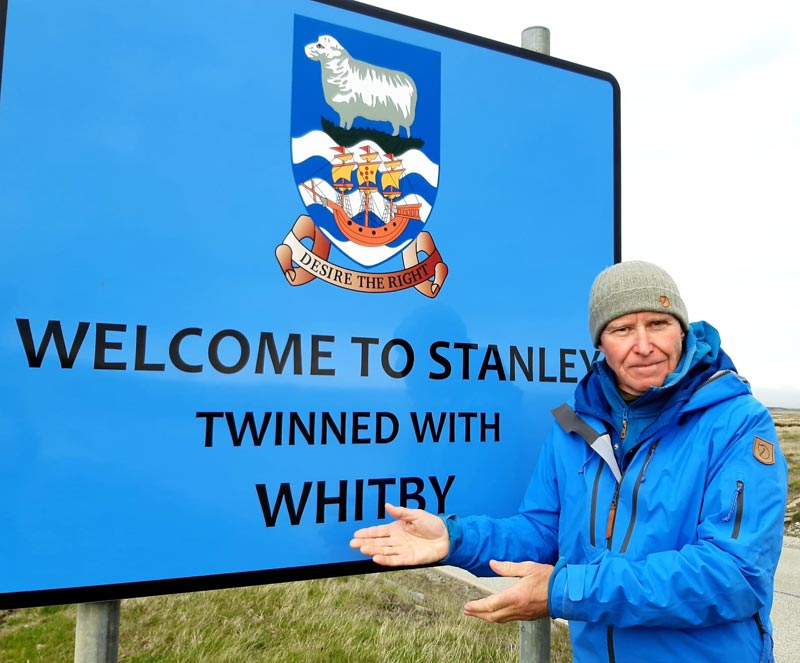 The Falkland Islands is a great place for hillwalking and scrambling and there are impressive crags for rock climbing. As in any mountainous remote area it is best to be prepared and as self-reliant as possible. Mobile phone coverage is not good in the Falklands, the population is sparse and long distances to remote farmhouses may have to be covered to raise help. Generally you will be alone in the Falkland hills or on walks, which is great if you like solitude away from the Bank Holiday crowds on UK hills. 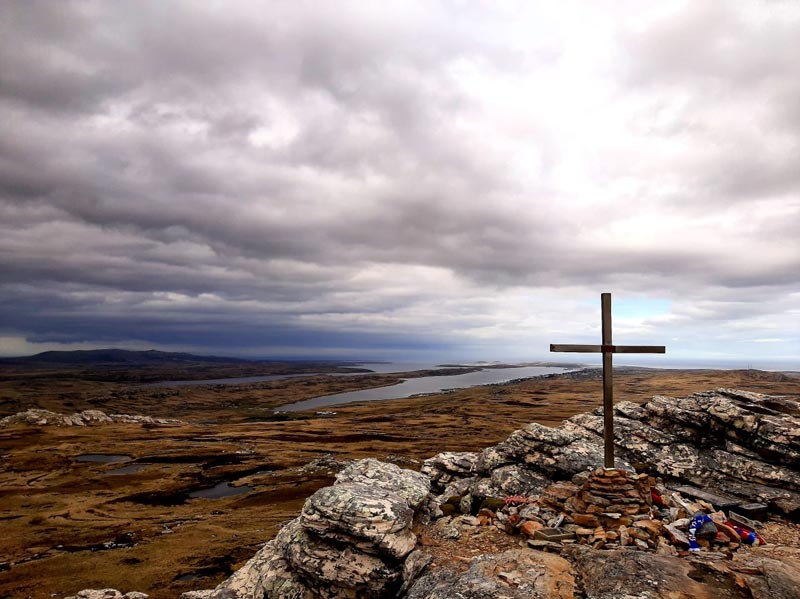 The well-known peaks from the 1982 war with Argentina, Tumbledown, Longdon, Harriet, Two Sisters, Wireless Ridge, William, Kent and Sapper Hill are all easily accessible from Stanley. They make interesting hill walks in their own right, some like Mount William and Two Sisters have easy scrambles to the summit cairns/memorials and airy Striding Edge/Crib Goch like ridges should you wish to deviate on to them.

They are made more interesting with the Battlefield history associated with them. Abandoned Argentinian equipment is still to be found on the hillsides, including rifles, mobile field kitchens, 50mm machine gun emplacements, dugouts, shelters, shoes, blankets and sometimes some of our spent munitions. Thankfully the minefields have been cleared, otherwise that would be a tad more serious than the risk of avalanche in winter. 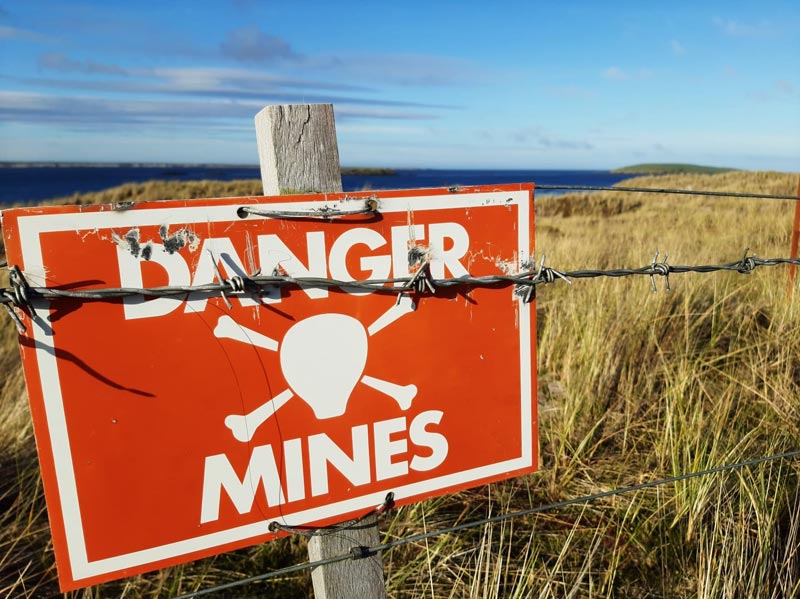 Further afield there are other interesting and challenging hills, mountains and walks. Some of the coastal walks are particularly interesting and spectacular, often with white sandy beaches, cliffs, turquoise sea, Penguins, Sea Lions Seals, and other wildlife. The Rockhopper Penguins are particularly endearing, they literally hop on their two feet up near vertical cliffs like Johnny Dawes in a tuxedo, sometimes using their beak for balance/grip. They nest well above the sea to try and get away from predators like Leopard Seals and Sea Lions. Unfortunately, the Rockhoppers are still not totally safe as Skuas and Cara Cara birds dive into the colonies and fly off with eggs and very young chicks. 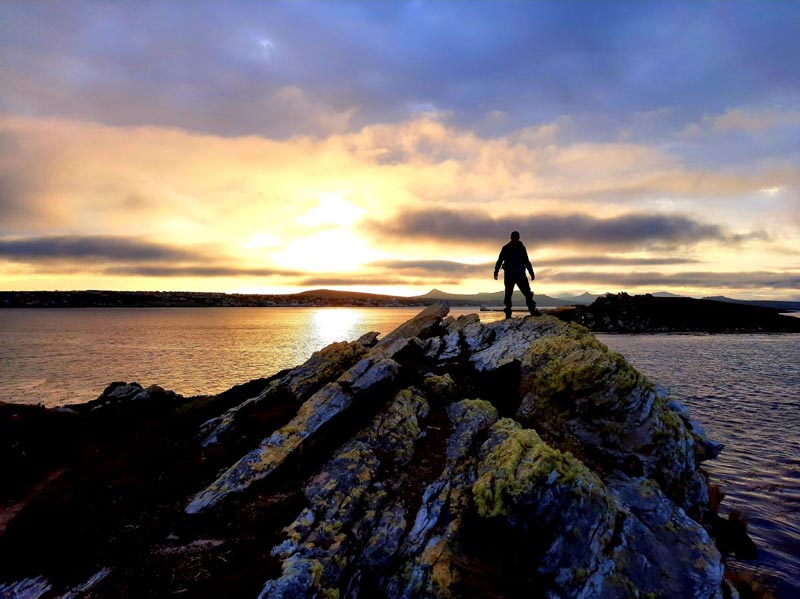 There are also more accessible low level day walks around Darwin and Goose Green, which also has the interest from the 2 Para assault in 1982 when Col H jones was killed. Another bimble I did was around the coastline of Gipsy Cove near Stanley. This easy walk has panoramic views to the hills, white beaches, rocky headlands, old WW1 and WW2 Battery guns a photogenic shipwreck and Penguins.

The low lying Bleaker Island is stuffed with wildlife, Elephant Seals, Penguins, Sea Lions, Leopard Seals and birds galore. Here I did a lovely low level walk culminating on the summit of the island Semaphore Hill 89’. A far cry from 26000’ (8000m) in the Himalaya but nevertheless very interesting and enjoyable with a lot of wildlife to see. 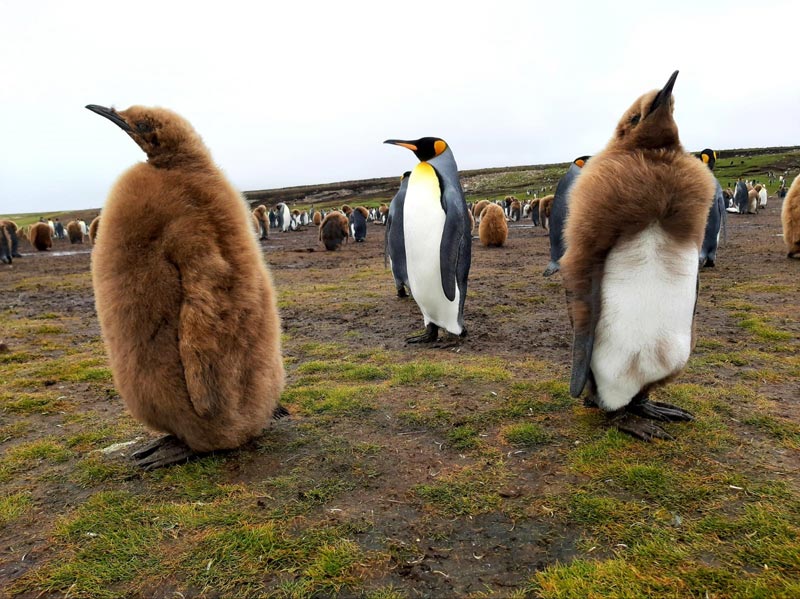 If you want something more demanding the highest peak is Mount Usborne at 2313’ (705m). Its outline is reminiscent of a North Pennine Fell such as Cross Fell, Whernside or Pendle Hill and it is about the same height. But the north face is more like a Cairngorm corrie, which is peculiar as in the southern hemisphere it should be the south side that has the glacial corries. No one really knows why the corries are on the north ‘sunny’ side. Perhaps in the last ice age it was the prevailing cold wind from the south which deposited snow on the lee slope to keep feeding the glaciers and forming the corries and still remaining ‘tarns’.

Getting to Mount Usborne can be a challenge. I had help from Grant a local hillwalker with a Land Rover, otherwise it is a 10-15km walk over moorland-like terrain to reach the foot of the mountain. You do need to be skilled in real off road driving and I do not mean as in the UK on rough tracks. This is true off road driving across country. It is preferable to travel in two vehicles so you can tow each other out and big jacks and wheel boards for driving onto are essential. I had the full experience on Usborne. Grant got bogged down. Generally if you cannot extricate yourself a local will probably come and help. There are not many locals though and that can takes hours. Grant advised me to bash on alone up Usborne while he jacked his Land Rover out. I had to walk a few extra kilometres further over the lower approach terrain but it still only took me 3 1/2 hours to get up and down by which time the Landie had been debogged. 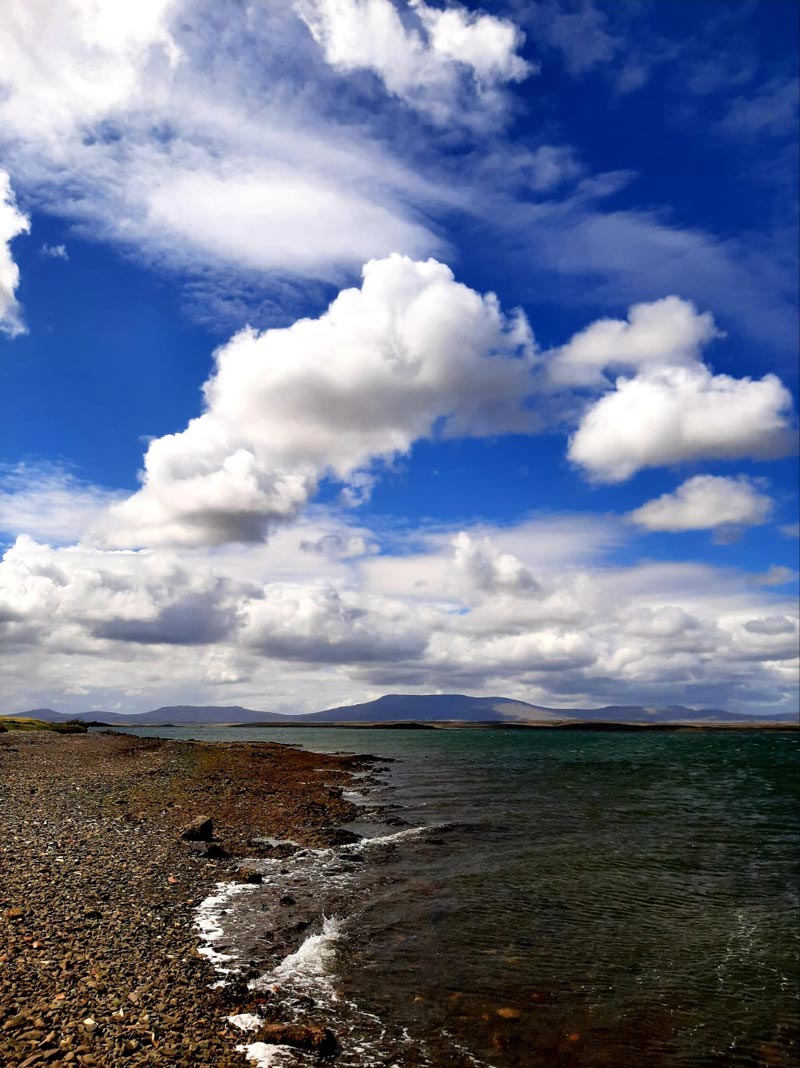 Usborne is not a technical climb, more of a walk like in the North Pennines. There are no paths or tracks on the ground or rights of way and permission must be sought from landowners, Mount Usborne is on Falkland Island government Land and permission is no problem, usually landowners are happy to let you walk on their land.
The terrain is rugged with a mixture of White Grass, Peat Bogs, Diddle Dee – which is a heather-like scrub and rocky Stone Runs, which are low angled areas of quartzite boulders and rocks – like rivers of stone. These Stone Runs are a geological feature of the Falklands which Charles Darwin noted on his voyages. In general, I did not find the terrain as gnarly as walking across country in the Pennines. The bogs did not seem as deep, the White Grass is easier than Bracken, the Diddle Dee is not as high or as thick as Heather and the rocky Stone Runs are more stable and less steep than scree. 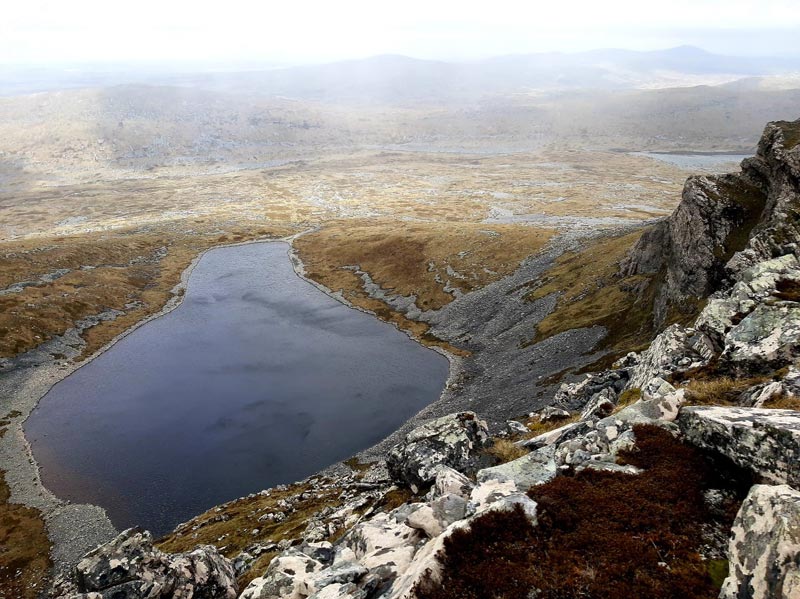 The weather conditions can be taxing Even though it was summer on my ascent and descent of Usborne the wind was relentless and on the descent I was engulfed in a mini blizzard and plastered in snow. I found my Fjallraven windproof clothing really useful, sometimes wearing a waterproof shell in the odd heavy rainfall period. The atmosphere and air is very clear, fresh and clean, I found sunglasses were useful even on dull days and definitely helped to protect my eyes in the blizzard on Mount Usborne. Sunburn and windburn is a hazard and I used sunscreen on my exposed face and neck. 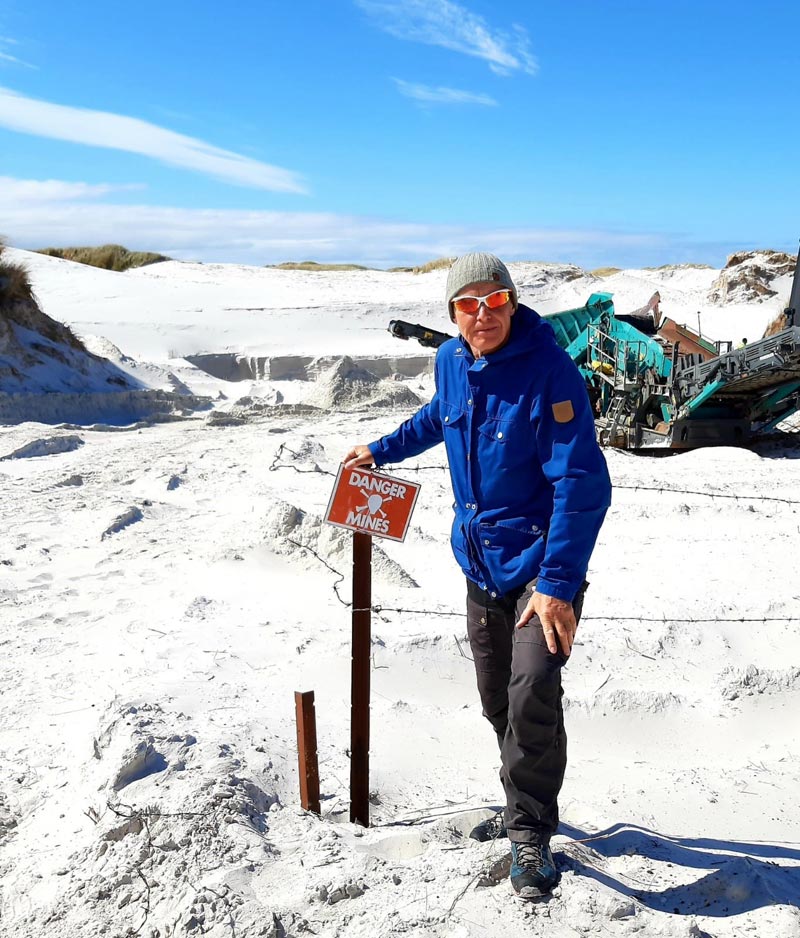 Should anything go wrong there is an efficient well trained search and rescue service with two dedicated AW 189 helicopters permanently on standby at Mount Pleasant Airport MPA. As in the UK until recently this rescue capability was covered by the military with yellow RAF SeaKings, but these have gone; replaced byprivatised helis branded Coastguard. There are also two S 61 helis used for transporting military personnel and supplies. All four helicopters could be used for medical emergency response if necessary. 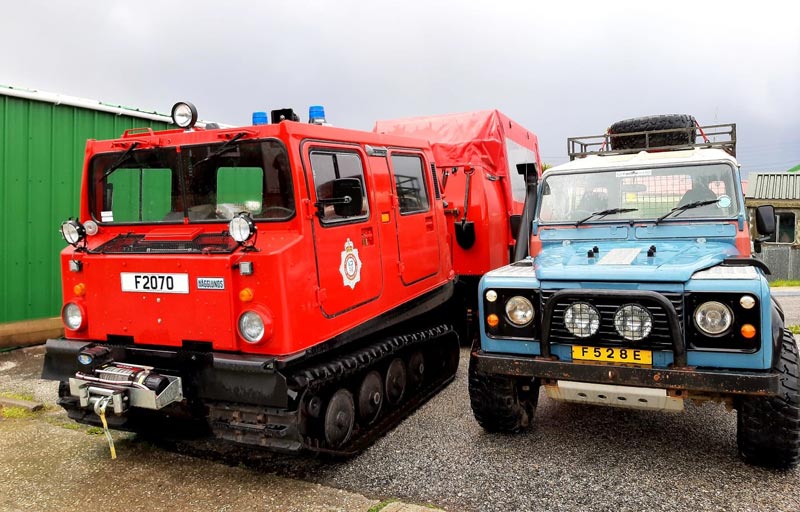 If the helis could not fly due to cloud or other conditions the Fire and Rescue Service and the Falkland Islands Defence Force (FIDF) would be called out as defacto Mountain Rescue and they do train for such emergencies. Using Off road vehicles such as Land Rovers and ex-military tracked BVs they would be able to access close to an incident. Essentially they are the Mountain Rescue Team. If necessary the SAR heli would coordinate and lift the FIDF and Fire and Rescue personnel to an incident especially if it was on West Falkland which is very sparsely populated. Essentially there is rescue cover in the hills, which from a population of about 3000 people is very well organised.