My sister was really looking forward to reading my 21st birthday present. It was Hard Rock by Ken Wilson. Little did she know that it was a compilation of some of the best hard rock climbs in Britain. She was disappointed when she realised that it was not about Led Zeppelin, Black Sabbath or Deep Purple.

As a climber and photographer, Hard Rock was an inspiration to me and still is, it is a 'Tour de Force of a book. T he high quality photographs of climbers in action with descriptions of gnarly tales and minor epics on the routes written by well known climbers was enthralling. I aspired to climb as many of the routes as I could and managed most of them. I know three people who have climbed all of them, which is an amazing achievement.

Originally the photographs in Hard Rock were black and white, a medium which I started in, developing my own prints in the school dark room. The next editions of the book included colour photos, from transparencies, which is what most of us graduated to before going digital and even using our phones to take climbing photos, video clips and the ubiquitous selfies.

Ken certainly set the bar high with Hard Rock, both from a photographic, literary content and print quality and publishing standard. 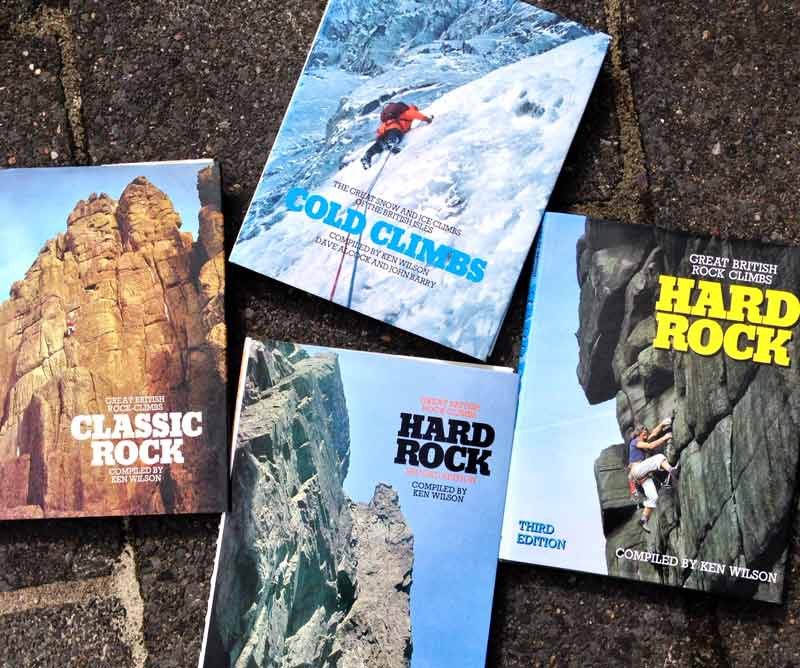 I have Ken to thank for many great mini expeditions around Britain, climbing Hard Rock routes and revelling in the pictures and route descriptions to this day.

Next came Classic Rock, which some dubbed 'Soft Rock' or 'Easy Rock'. This also is a fabulously inspiring book, with rock climbs that most of us can climb, or even solo!

The last paragraph of the Preface in Classic Climbs is classic : Whether you are a novice moving hesitantly up your first climbs, an expert soloing on a wet day, a veteran seeing if the body will still perform what the mind decrees, or an instructor introducing pupils to their first experience of climbing – these classic routes have a hoard of marvellous secrets and situations awaiting discovery. These are good honest climbs, worthy of the attention of all climbers.

Not forgetting hillwalking the next two books were The Big Walks and Classic Walks. These also inspired me to get out there in the hills, fells and mountains and then there is Extreme Rock - for the really hard rock athletes.

The gnarly tome is Cold Climbs. This compendium of winter routes, mostly in Scotland still provokes great memories of winter fun and suffering for me and there are a couple I still aspire to do. As Ken writes in the Preface : Cold Climbs deals with climbing of a less tangible nature, rarely predictable, often dangerous and uncomfortable, and set in an impressively hostile environment.

My first awareness of Ken was through Mountain Magazine, which he published and edited. This is perhaps the finest mountain magazine ever published and a full set of this iconic magazine is quite valuable. The font cover photographs were originally black and white and of exceptional quality. Inside the features were always high standard, climbers aspired to Mountain Magazine and even the adverts were high quality. My claim to fame is that I appeared on the front cover of an issue in the mid 1980s.

In the last 25 years I would often meet Ken at BMC AGMs or other events, or just in a pub after cragging. He always made his presence known and had strong opinions especially on traditional British rock climbing. To many he was enigmatic, some perhaps thought he came across brash and loud, personally I found him very likeable with a wicked sense of humour. Ken Wilson was a great asset to British climbing, perhaps not one of our hardest climbers or mountaineers putting up new routes or climbing Himalayan peaks, but certainly one of the most influential.

More in this category: « North Wales Trail Running - reviewed by Steve Chilton Doug Scott’s biography of the dramatic first ascent of the Ogre is released as audiobook »
back to top