I'll admit I have actually watched Love Island. In my defence I've a teenage daughter, but I've been fascinated by the sheer array of ludicrous sunglasses on display. I'm assuming they get provided by sponsors of the show because there's no way anybody would where them otherwise would they? I mean the only people that usually wear ridiculously oversized glasses are cyclists and the rules state they shouldn't be worn off the bike anyway. Going back to the point of this review, I do like my shades and was only too happy to take up the chance to review the Smith Attack glasses.

The next generation in Smith performance eyewear has arrived. The Attack is faster in every detail. Experience the sound of speed with Smith MAG™ interchangeable technology; the lens change innovation that enables fast ChromaPop™ lens swapping for varying light conditions. Two ChromaPop™ lenses are included, and have been crafted with a lowered-brow design for increased ventilation. The Attack also features our two-position nose piece that is engineered to give you perfect fit and all day comfort. Megol temples ensure that your glasses are secure at your fastest velocity. 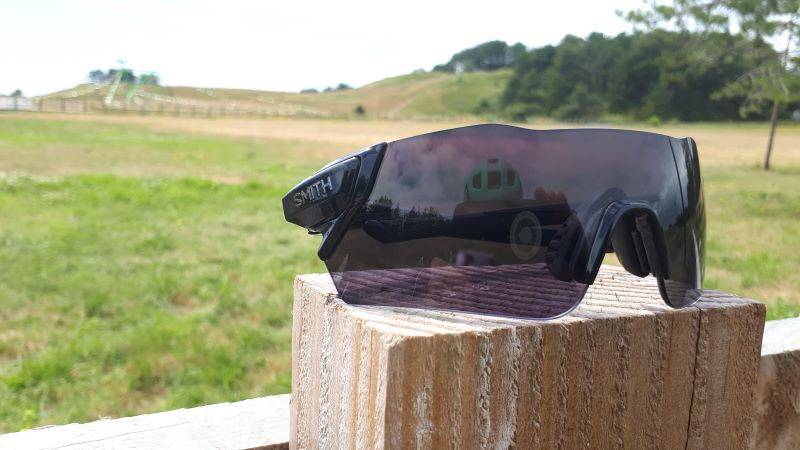 Last year I tested the bigger and brasher brother of the Attack the Attack Max and it's fair to say I liked them. Near perfect I said. The Attack are the original smaller version. Providing more ventailation, albeit with less coverage and aren't as ostentatious. They have the same simple yet brilliant Mag system for changing lenses and come in a hard case with 2 lenses. One ChromaPop Contrast Rose for lowlight conditions and with this pair a ChromaPop Photochromatic Clear to Grey. This is something I personally love. Living in a country with changeable conditions and on roads and trails where one is dipping in and out of tree cover a dark lens can lead to dangers being hidden in the shadows. Things such as pot holes or fallen branches may not be seen until it is too late and take it from me, not seeing a fallen tree is not something you want to experience.

I've used Transition lenses for 6 years day to day and I find them pretty perfect so the ChromaPop had a lot to live up to. Putting them on indoors and the clear really is what it says and is clear. Going out in the bright sun, I would personally like them to get a bit darker, but this is something I was more aware sitting having a coffee rather than whilst actually riding. On the undulating road up the Neath Valley the change when in and out of the trees was instantaneous with no noticeable difference in lighting levels. Are they as quick as Transistions? Possibly quicker. Not a totally fair comparision as technology and my old glasses have done over 15000 miles and 7 or 8 countries, picking up a couple of scratches along the way but still impressive from the ChromaPop.

Like the AttackMax, the Attack come with a soft case as well as the hard case. The soft cast doubles up as a cleaning cloth and the lens is easy to keep clean and smudge free. Like the AttackMax as well the nose piece is interchangeable allowing you to tailor the fit to your face and like previously mentioned the Mag system of removing the arms make lens changing stupidly easy and takes mere seconds. Although with such a good Photochromatic lens the need to do so would be extremely rare anyway. 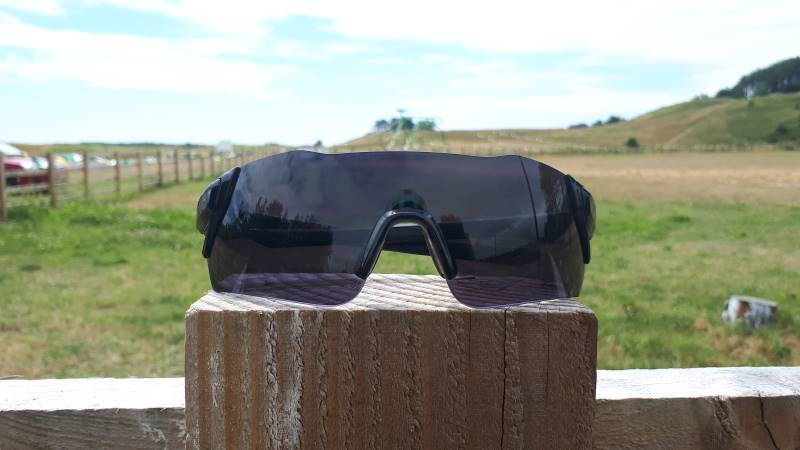 But what about the performance. I liked the AttackMax and how would these stack up. Well for me I prefer the wider fit and larger coverage of the AttackMax. On one descent I didn't feel as protected by the Attack. However this was my first long descent in months and I was being a big crybaby anyway. The comfort levels on the ears are there but possibly a little tight for me. That being said I have gone on record as saying I have a massive head so that's a common issue for me. The arms fit outside the helmet straps so the important issues are dealt with anway.

The RRP of the Smith Attack with ChromaPop Photochromatic is £190, which is pretty much the going rate for a decent pair of cycling glasses. Photochromatic lenses are pretty much all day every day options and will work in most conditions. On a truly bright day with lots of glare I'd prefer a dark option but that is rare to be honest.

Because of the coverage I'd go for the AttackMax over the Attack, but that is personal choice, in part due to the size of my head but the Attack are a very good pair of cycling glasses and the lens is up there with the best. Smith products are still pretty little known amongst some cyclists who go for the same old brands but are a brand that are certainly worth looking at.

More info on the Smith Attack can be found here

More in this category: « Helly Hansen Phantom Mesh 1/2 Zip and Movatn vest tested and reviewed Smith Trace Helmet with MIPS: Tested and Reviewed »
back to top